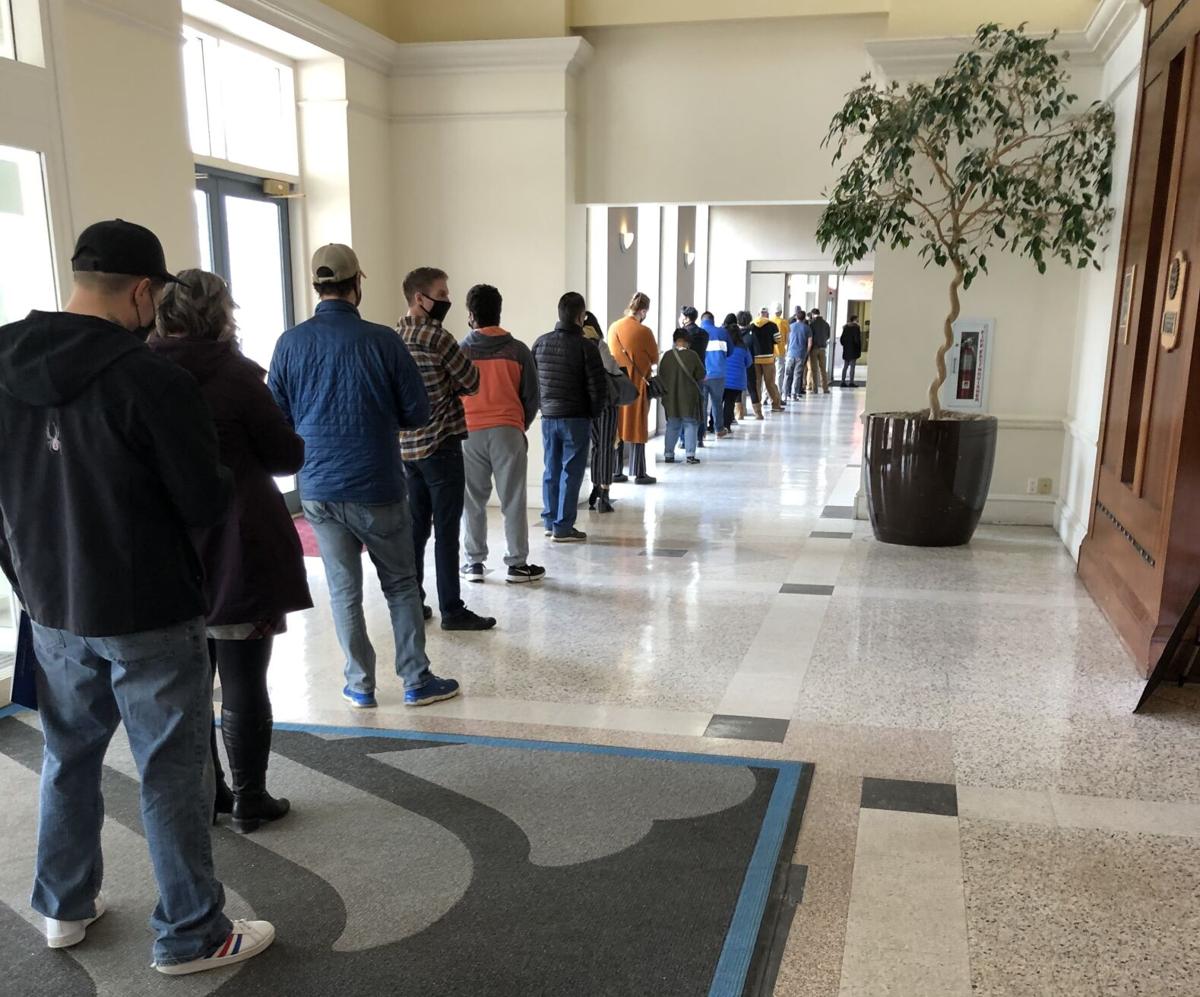 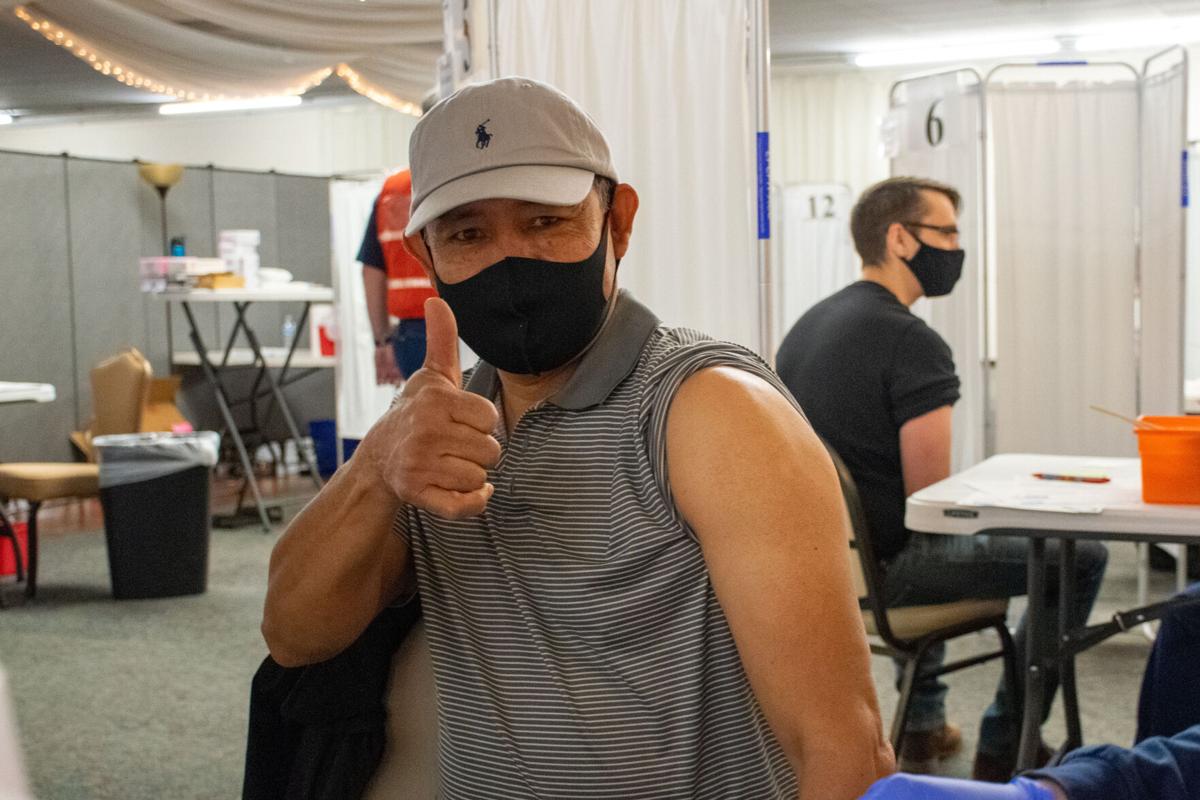 Florentino Hernandez gives a thumbs up after receiving the COVID-19 vaccine last month. 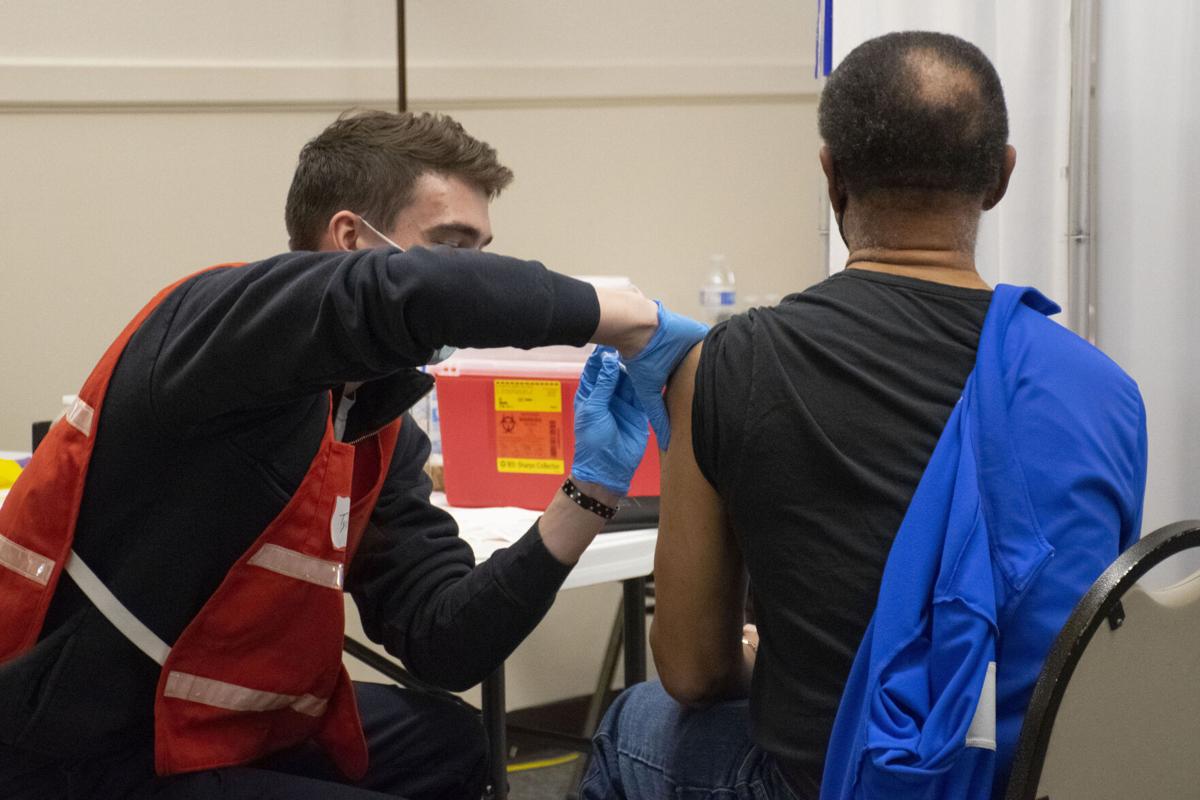 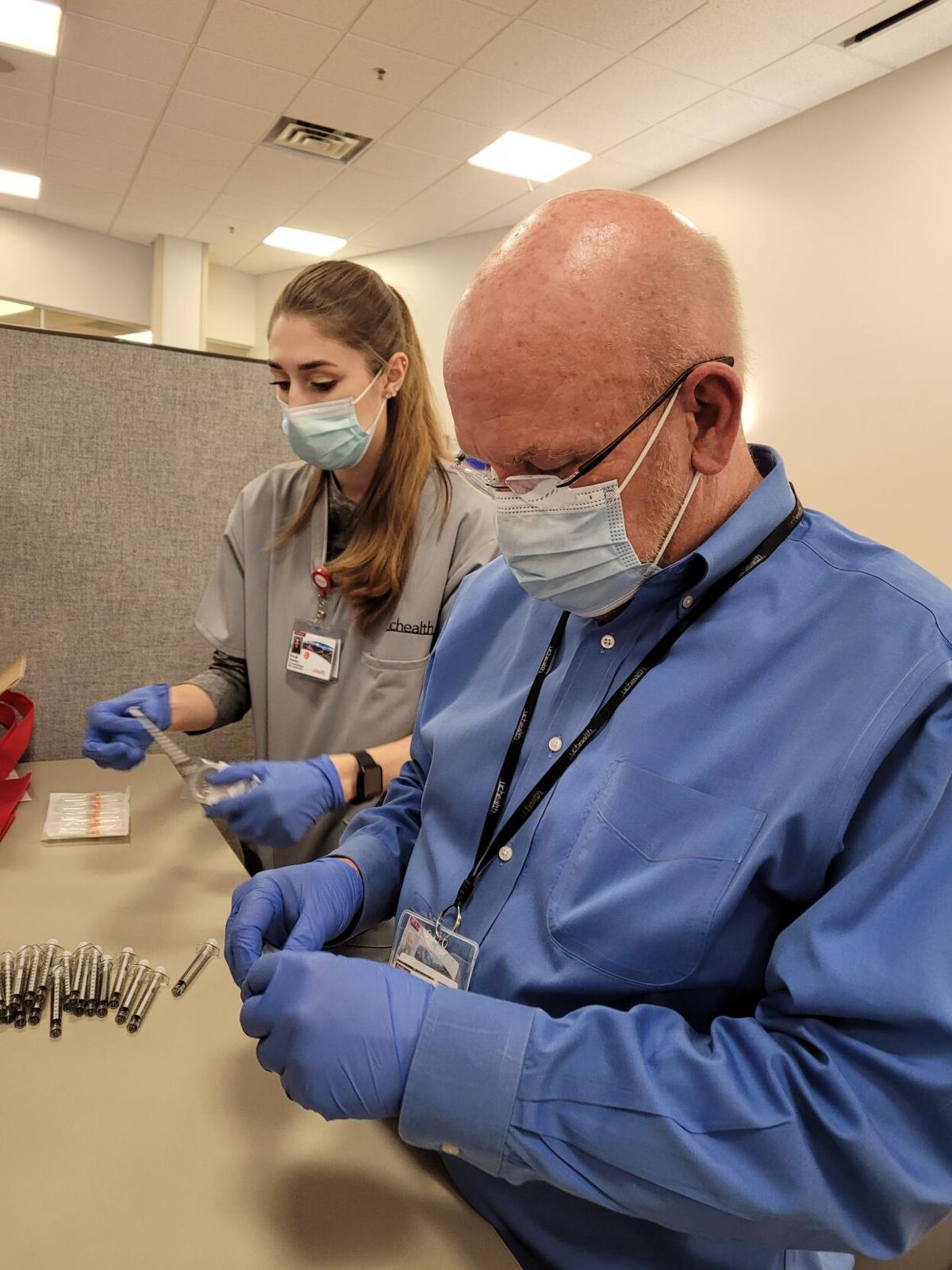 Florentino Hernandez gives a thumbs up after receiving the COVID-19 vaccine last month.

“It’s a personal choice,” he said.

Messages about the vaccines have been confusing, he said, depending on how the political winds are blowing.

He questions the rush for pharmaceutical companies to bring vaccines to market and has concerns about their safety and long-term effects.

But Jeanguenat said he’s encountered a lot of pushback.

One example: A golfer in the cart he was riding in last week asked if he was getting a shot. Jeanguenat said he wasn’t sure.

“People who don’t get it are just dumb,” the guy replied.

“I should not have to be shamed into getting it,” Jeanguenat said. “If it was so effective, why do the people that already have the vaccine still fear someone who does not choose to get it.”

Sue Kys of Colorado Springs also has had her intelligence questioned.

She said she’s been called un-American, stupid and selfish for deciding not to be vaccinated.

“People are shaming me, telling me I’m not ‘doing my part,’” Kys said. “If they’re afraid, they don’t have to be around me.”

About one in three Americans said in February they probably or definitely won’t be inoculated, according to a Pew Research poll. That's an improvement from last September, when nearly half of Americans said they didn't think they'd get the vaccine.

But public criticism for those who don’t might worsen in coming months.

Vaccine passport programs, where people show proof of vaccination in order to travel, attend large events and work in some jobs, are emerging.

Such a requirement, in itself, constitutes a matter of shaming, said Colorado Springs resident Bill Stephens.

“I think we’re still in a free country,” he said. “Don’t I get to take responsibility for myself? Those who think otherwise, if they’re that concerned, they can stay home. I’m not responsible for them.”

Many people think of vaccines as “a significant victory in what’s been a long and devastating pandemic,” she said. So, it may seem illogical that some people don’t want to be inoculated.

People don’t get vaccinated for myriad reasons, Reich said, including mistrust, the perception that the risks outweigh the benefits, fear of adverse reaction, personal rights and individual values.

Opposing viewpoints may lead to the unvaccinated feeling stigmatized and judged, Reich said.

“When individuals reject vaccines but want to fully participate in community spaces, it is easy for those who are working toward community solutions to express frustration with the ways they see them as wanting to benefit from public investment without the obligations that come with being part of a community,” Reich said in an email.

“We see this with debates about whether unvaccinated children should be able to attend schools, or when healthcare workers are expected to get a flu vaccine to protect people in their care.”

That sums up what Colorado Springs resident Mark MacFarlane, who has gotten vaccinated, believes.

“I think it’s an individual decision for society,” he said. “I’d compare it to polio or measles, where you’re putting other people at risk, if you’re selfish.”

As of Thursday, 26% of American adults have been fully vaccinated and 43% have had at least one COVID shot, according to the Centers for Disease Control and Prevention’s COVID-19 data tracker.

About 70% of the population needs to be vaccinated to reach herd immunity, meaning enough people have had the disease or been vaccinated to reduce the spread, according to an estimate by The Center for Infectious Disease Research and Policy.

Balancing individual preferences and community goals of ensuring public safety may lead to further restrictions on the unvaccinated, Reich speculates, such as “ongoing mask-wearing, regular COVID testing or other strategies to contain infection while also finding paths to mutual respect and support.”

Can vaccine be required?

There’s nothing in Colorado law that prevents private employers from requiring employees to get vaccinated, said Susan Strebel Sperber, an employment law specialist and partner in the Denver office of Lewis Roca.

Some companies in Colorado already are doing so, Sperber said, in health care, entertainment, travel, catering and other food-service industries.

Such businesses must make accommodations or exceptions for employees under the Americans with Disabilities Act and for religious beliefs.

Just 4% of Colorado employers indicated they are considering requiring vaccinations for employees, according to a survey conducted in February by Employers Council. The nationwide association helps businesses with issues of employment law and human resources.

“It’s a pretty low percentage and consistent with what we’re hearing from employers,” said George Russo, who heads the southern Colorado office, which works with about 400 area businesses.

Requiring vaccines like the flu shot for employees in medical fields and long-term care is not uncommon, he said, but is more uncomfortable of a thought for a downtown shopkeeper, for example.

Some employers who are requiring the COVID vaccine have encountered resistance from employees, decreased morale and a negative image, Russo said.

The Employers Council survey showed “employers are more comfortable encouraging it than mandating it,” he said.

Future legal or legislative decisions may preclude companies from enacting vaccination requirements. Governors in Texas and Florida, for instance, have issued executive orders to stop vaccine mandates among businesses that receive state funding.

“It’s so new, the law is really in flux and the vaccine isn’t readily available to those who want it,” she said. “It’s maybe premature to make a global decision,” she said.

Because the U.S. Food and Drug Administration authorized the COVID vaccines for emergency use during the pandemic, federal employees cannot be required to receive it.

At Fort Carson, for example, the vaccine is offered on a voluntary basis, said spokeswoman Brandy Gill.

“Prioritized Army personnel are highly encouraged to take the vaccine to protect their health, their families and their communities, and to lower the public health risks associated with the pandemic,” she said in an email.

Can employers ask employees if they have been vaccinated?

While privacy laws prohibit employers from asking workers about their medical conditions, the federal Equal Employment Opportunity Commission does not define vaccinations as a medical condition.

Certain sectors of the population are lagging in being immunized.

Of the full vaccines administered in the United States from mid-December through last Thursday, 68.5% were to white recipients, 8.7% were Hispanic/Latino, 7.9% were Black and 9.2% were multiracial, according to CDC data. People are considered fully vaccinated if they have had two doses of Pfizer or Moderna shots or one of the Johnson and Johnson brand.

The Latino and Hispanic communities have “a long way to go,” said Julissa Soto, director of statewide programs for Servicios de la Raza, which provides Spanish-speaking inoculation sites around Colorado and has an office in Colorado Springs.

Myths, misinformation, a lack of computer access or email address and feeling intimidated are making it hard to sign up Latinos for the vaccine, Soto said.

“Although our promoters are well informed about the benefits of the vaccine and they try to give them scientific information from official sources such as the CDC, it is hard to change someone's mind, specially of elderly people,” she said.

“There’s been bad health care to poor people of all races,” he said.

To “serve, heal and liberate” the community, White asked El Paso County Public Health if his church could become a vaccination center.

Two recent clinics received “overwhelming” response, the pastor said, with more than 800 doses dispensed at each.

“We got people from all over, from every race, every ethnicity, every sexuality,” White said.

The church, at 3625 Marion Drive, will host another clinic on April 24, and is expecting more than 1,500 shots to be available.

Improving access to vaccines has been a priority in El Paso County, according to public health leaders, who have set up clinics in low-income and rural areas, hosted mass vaccination events and provided mobile clinics traveling in neighborhoods.

“People want good medical care,” White said. “If I could have a vaccination clinic open six days a week at our church, we’d have our doors open.”

About 700 people have died after getting the vaccine between December, when the first vaccines were approved, and last week, according to the Vaccine Adverse Events Reporting System.

The cause of the death in incident reports is not presumed to be the vaccine, but rather people who died after receiving it, from the same day to a month or more afterward.

But deaths are rare, given that more than 112 million Americans have received at least one dose of vaccine, according to the CDC.

“With that many millions of doses given, it’s pretty safe," said Dr. Michelle Barron, senior medical director of infection prevention and control for UCHealth and one of Colorado’s top infectious disease specialists.

In fact, ongoing studies have shown that it’s safe for pregnant women and those who are breastfeeding, she said, although she recommends women talk to their primary care doctor about any concerns.

The benefits of being protected by the vaccine far outweigh the risks, Barron said.

Barron said the only people who should not get vaccinated are those with severe allergies to any of the vaccine compounds — which she said is uncommon.

Reluctance to be vaccinated often is due to the type of information being disseminated, Barron said, which has changed as the medical community has learned more about the virus.

“Yes, it was done quickly, but we followed the rules subjected to other vaccines, like the flu shot or childhood vaccines,” she said.

Political division also continues to be a factor.

A recent Marist poll conducted in conjunction with NPR and PBS NewsHour found 49% of Republican men said they would not take the vaccine when it's available to them.

“I think we live in America, a free country, and if you want to get it, get it, and if you don’t, don’t,” said Colorado Springs resident Mischelle Chambon, who got vaccinated. “Other people’s health is not my responsibility.”

There will always be a contingent of the population that won’t get the COVID vaccine, Barron said.

“Some people will continue to have strong opinions about the vaccine, one way or the other,” she said.

Barron recommends talking to people who have gotten the shot and asking them how it went.

State officials say they've found no reason for concern after investigating 11 people who reported adverse reactions to the Johnson & Johnson vaccine Wednesday, a small wave of side effects that prompted the closure of a mass vaccination site.