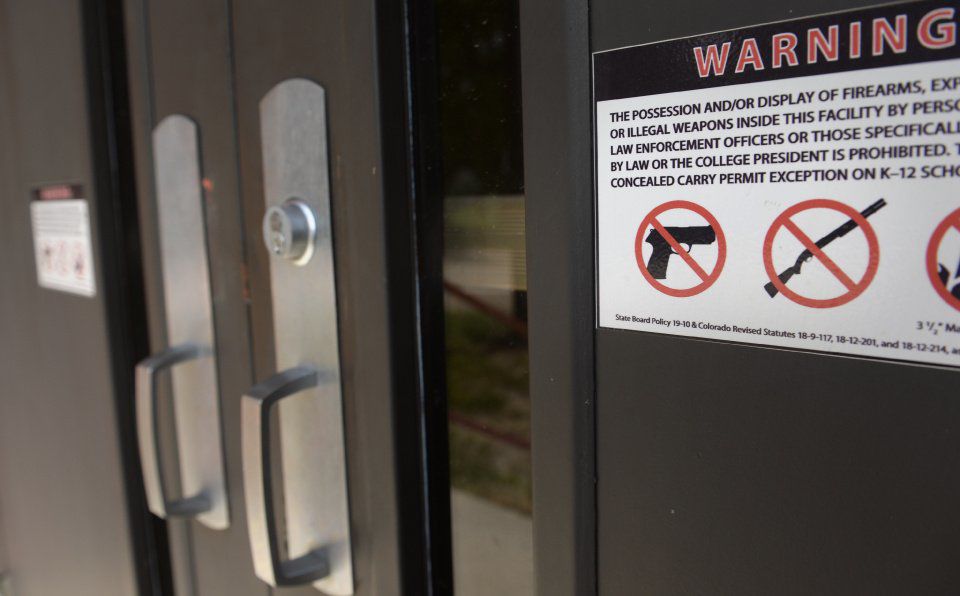 Signs at entrances to a Falcon School District 49 school in August 2015 declare that posession and/or display of firearms is prohibited. 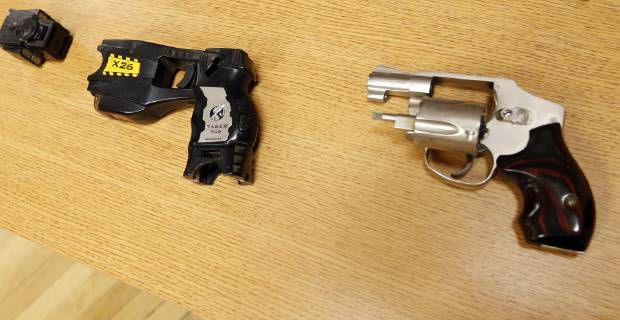 Signs at entrances to a Falcon School District 49 school in August 2015 declare that posession and/or display of firearms is prohibited.

Teachers and other employees in a second El Paso County public school district will be allowed to carry concealed handguns on campus.

The five-member Peyton 23-JT Board of Education voted unanimously last week to designate teachers and other volunteer staff as security guards, after being trained to respond in an emergency.

“Having armed staff is not the front-line defense; it’s more if we don’t have any other options, we have the potential to stop any threat,” said 23-JT Superintendent Tim Kistler. “The hope and prayer is that we never had to pull an arm.”

Hanover School District 28 board votes to allow trained teachers, other staff to be armed

The Peyton district is forming committees that will develop a broadbased security program before arming employees.

The areas they will address include social and emotional aspects of an intruder attacking a school; medical training necessary to respond to a shooting; enhancing building security, perhaps with better video cameras, improved entryways, fencing the perimeter and key cards; and everything related to carrying firearms on school property.

Carrying concealed weapons won’t happen until the board approves specific plans for each area, Kistler said.

“It’s a team effort,” he said. “Each area falls under the umbrella of security and safety, and the groups will meet regularly, so we know what people are thinking about how this can be put into place.”

Statewide, employees from at least 25 of Colorado’s 178 public school districts have been trained through an active-shooter response program for educators because their districts have authorized armed staff or are in the process, Laura Carno, executive director of FASTER Colorado, told The Gazette in August.

Public interest was renewed, she said, after the mass shooting in February by a former student at Marjory Stoneman Douglas High School in Parkland, Fla., in which 17 people were killed.

Lawmakers last session approved $30 million in funding to prevent school violence, and Kistler said the district will apply for a grant to cover the cost of training 10 to 20 employees to be armed on school premises.

“If we do receive a grant, we could potentially have staff trained maybe by the fourth quarter of this year,” he said.

The program is overseen by the Department of Public Safety, which will distribute funding for security improvements, including more training for school police officers, training school staff in crisis response and improving the physical security of school buildings.

Parents, including a Colorado Springs police officer who asked not to be named, hosted town hall meetings in the summer, after an active-shooter drill at Peyton schools during which it took 22 to 40 minutes for emergency units to respond.

“There was a lot of discussion before bringing a proposal forward,” Kistler said.

A district survey of district employees and parents showed 70 percent approval for arming staff among both groups.

While protesters aren’t standing outside the schools chanting, “No guns,” there are still those who oppose the decision, including Pete Bates, who was on the board six year ago when it considered arming staff before rejecting the idea.

“Arming staff introduces risk to the school rather than prevents it,” Bates told The Gazette in August. “We’re bringing weapons into the school, when I think we should be more focused on keeping weapons out of the school.”

Said Kistler: “We’re continuing to talk to people who have concerns to say ‘We’re moving forward, what can we do to ease the fears.’”

Like Hanover, Peyton will keep the names of those participating confidential.

“It’s not just handing a gun to every teacher or staff member and have them walk around,” Kistler said. “That’s not the intent. The first five to 10 minutes is when the damage is being done, and if it takes 25 to 30 minutes for law enforcement to show up, it’s already over. We’re trying to minimize the impact.”

Denise Harrison hasn’t ever seen anyone get shot or die from a bullet wound. But her 15-year-old daughter has.