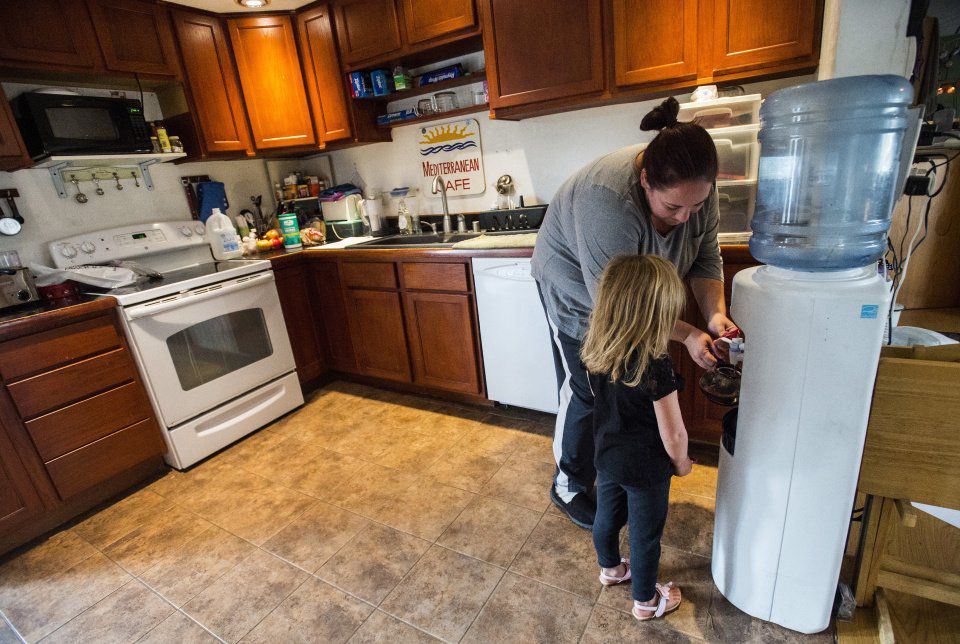 Bridgette Swaney and her daughter, Addison, 4, use the last of their bottled water to make mint tea at their Widefield home in 2016. High levels of perfluorinated compounds, believed to be from a firefighting foam used at Peterson Air Force Base, were found in the water systems of Security, Widefield and Fountain, forcing residents to drink bottled water. 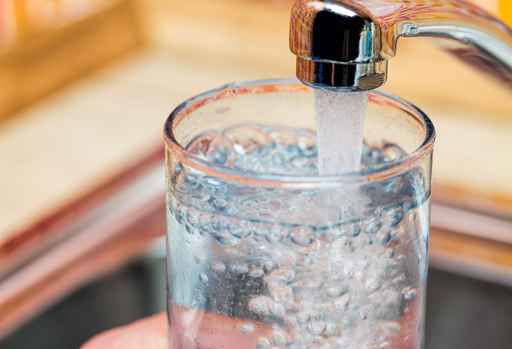 A large-scale study that will examine the effects of forever chemicals in the Fountain Valley drinking water is going to start recruiting participants later this month. The contamination was discovered in 2016 and the three large drinking water providers all took steps to address the problem.

Bridgette Swaney and her daughter, Addison, 4, use the last of their bottled water to make mint tea at their Widefield home in 2016. High levels of perfluorinated compounds, believed to be from a firefighting foam used at Peterson Air Force Base, were found in the water systems of Security, Widefield and Fountain, forcing residents to drink bottled water.

A large-scale study that will examine the effects of forever chemicals in the Fountain Valley drinking water is going to start recruiting participants later this month. The contamination was discovered in 2016 and the three large drinking water providers all took steps to address the problem.

Recruitment for a large-scale study on the health effects of "forever chemicals" will start in the Fountain Valley this month and its results could help set federal limits on the chemicals in drinking water.

The work is part of the second large-scale study in the country to examine exposure to perfluorinated compounds — a family of manmade chemicals that linger in the body and have earned the nickname "forever chemicals" — and the health risks they pose.

The first large-scale study was done 15 years ago in Ohio and West Virginia and found probable links between the chemicals and conditions including high cholesterol, thyroid disease, kidney and testicular cancers, said epidemiology professor Anne Starling, with the University of Colorado.

This study through the Agency for Toxic Substances and Disease Registry is set to investigate health effects of the chemicals including impacts to the immune system, kidneys, liver and thyroid. It will also help determine if the chemicals change neurobehavioral outcomes in children trough tests of their attention, memory and learning abilities. The study was expected to begin last fall but it was delayed by the pandemic, Starling said.

"We need large, high quality studies to produce evidence that there are health effects in humans," Starling said.

The study will also be the first to include people with high levels of a chemical found in firefighting foam in their blood, Starling said.

Firefighting foam from used by the military at Peterson Air Force Base contaminated the aquifer that residents in Widefield, Security and Fountain used for drinking water, studies have determined. After the contamination was found in 2016, drinking water providers for all three communities worked to ensure the water was safe. Since then, the Air Force has paid $41 million for three new water treatment plants to bring the level of chemicals down to nondetectable levels.

Researchers will take one-time blood and urine samples to help determine how the chemicals may have affected residents' kidneys, liver and sex hormones, among other bodily functions. It will not examine whether the chemicals cause cancer.

The urine samples will likely be more indicative of forever-chemicals residents have recently been exposed to, Starling said. Forever chemicals are used to make the nonstick surfaces for pots and pans and in other products.

The tests and residential histories should allow researchers to estimate the cumulative lifetime exposure residents have had to the chemicals, according to a news release.

The work will also examine the neurobehavioral effect of the chemicals in children because some smaller studies have suggested that exposure to the forever chemicals early in life may affect children's development and response to vaccines, but the connection is not yet well established, she said.

The researchers plan to have children complete puzzles and problem-solving tasks, similar to activities they might do in school, as part of the study, she said.

"We might be able to see differences in the average scores that might be suggestive of a problem," she said.

The neurobehavioral tests will not diagnose problems in individual children, she said.

The upcoming study expects to build on a recent study of 220 residents in the Fountain Valley that found the median level of a chemical specific to firefighting foam in residents was 10 times higher than the national median. Some residents had levels of the chemical that were much higher, said Colorado School of Mines Professor Christopher Higgins, a lead researcher on the study.

"We really do want to understand what that means in terms of health impacts," he said.

Scientists don't know whether the chemical specific to the foam is more or less dangerous than other forever chemicals, Starling said.

The levels of chemicals in residents seem to be dropping and that may be good if some of the health effects are reversible. But some people may still be experiencing long-term health effects.

One chemical’s half-life, the time it takes the body to part with half of the chemical in the blood, is 5.4 years, The Gazette reported previously.

Study participants will receive individual test results that could be shared with their doctor. The test results may not indicate a problem, but more and more doctors are becoming aware of the potential health effects of forever-chemical exposure, Starling said.

In the long-term, the Environmental Protection Agency and the National Academies of Science could use results from this study to help set enforceable limits on water contamination. No federal maximum limits on forever chemical contamination of drinking water exist, she said.

Recruitment for the study is expected to start later this month and researchers have set up an office in Fountain to meet with residents. Data collection could take 12 to 18 months. The entire study could be completed in 2024, although researchers should have results to share before that, Starling said.

In addition to accepting volunteers, the researchers will be selecting participants randomly and so some people may receive letters in the mail.