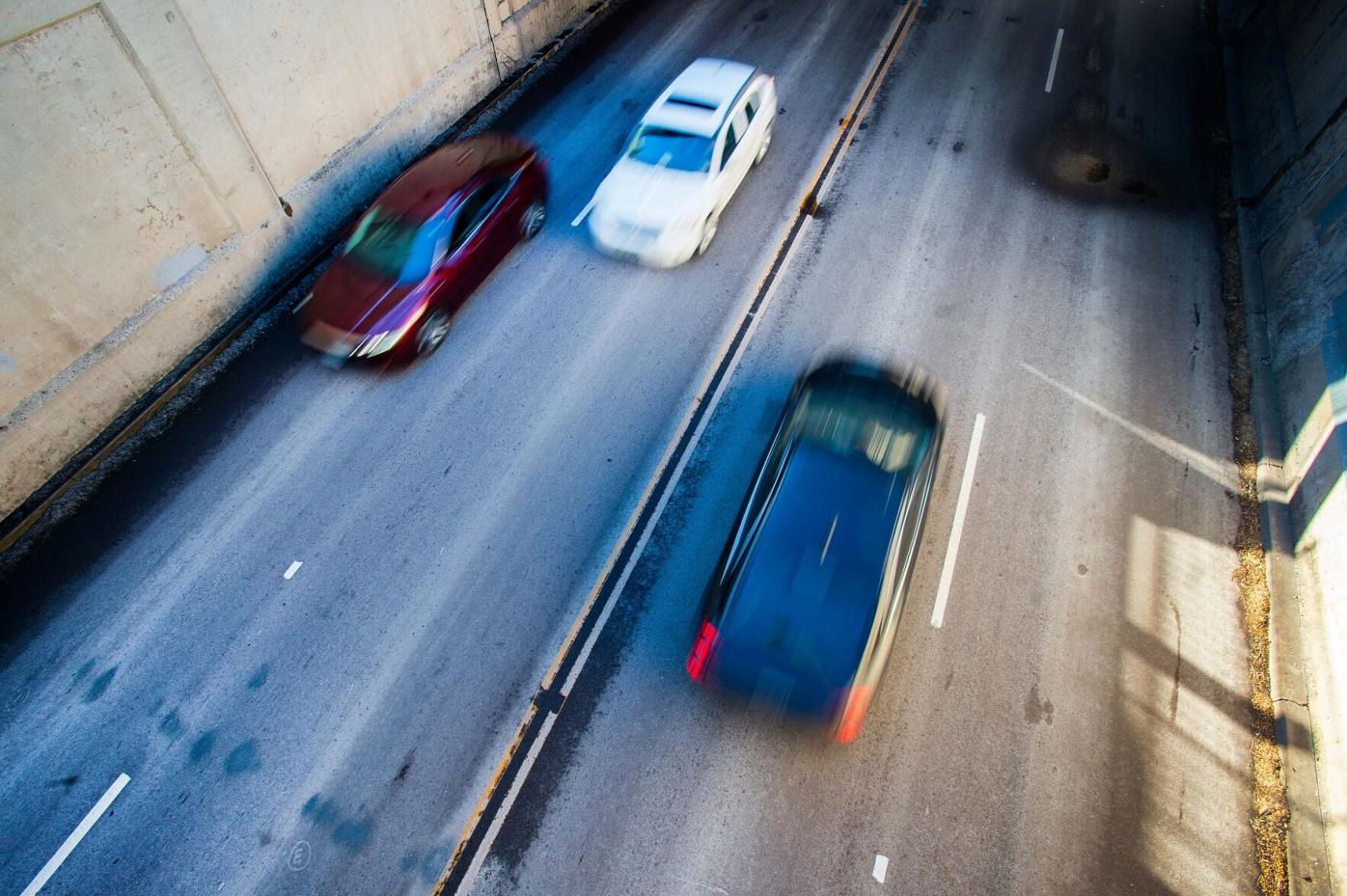 Vehicles drive along E. Platte Avenue in Colorado Springs Monday, Jan. 3, 2022. The city of Colorado Springs is looking for feedback on its plans to improve traffic along the busy roadway. (The Gazette, Christian Murdock) 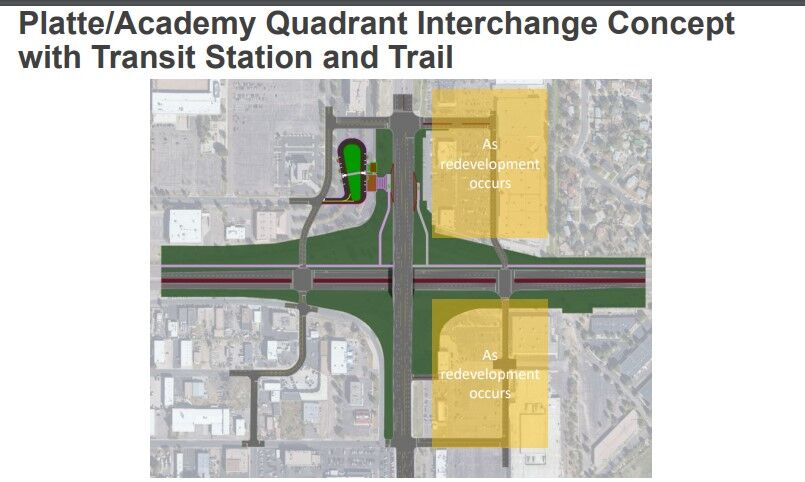 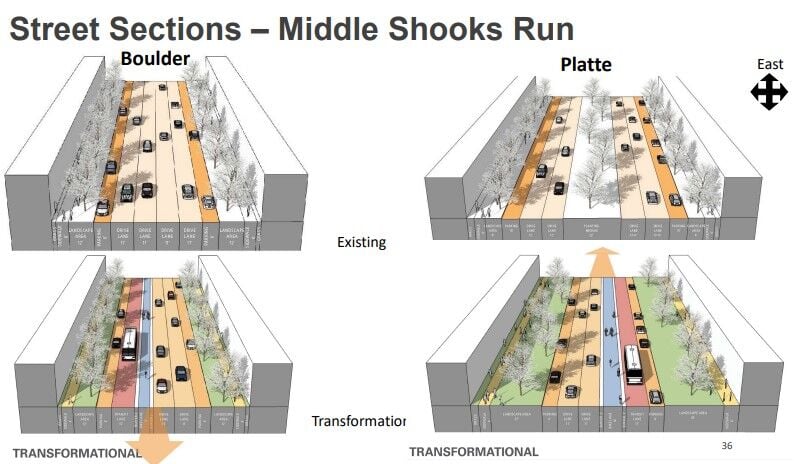 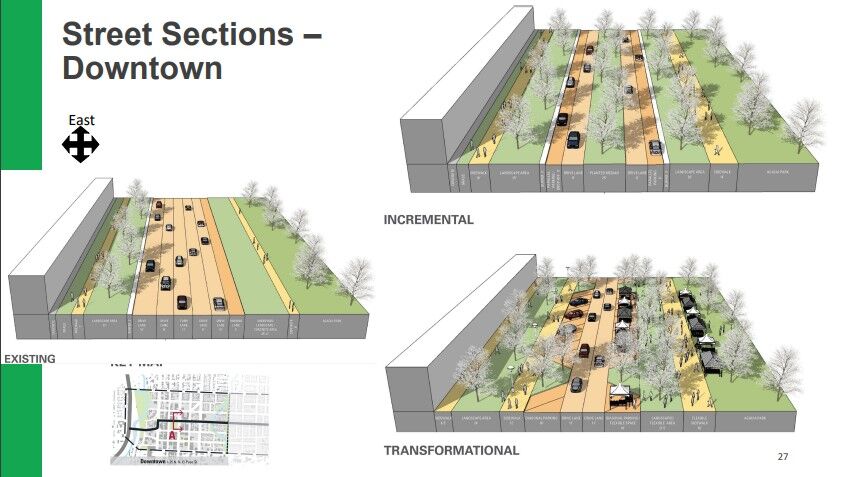 Platte Avenue may be headed for a major redesign in the coming years that could make a portion of it one-way and eliminate some travel lanes for cars along certain stretches to make room to dedicate to buses and bikes.

The city of Colorado Springs' 20-year plan for the road is still in its draft stages and outlines a series of options along the east-west corridor based on unique neighborhoods. For example, the downtown portion of Platte could see a reduction in travel lanes, while more lanes could go in farther east from Academy Boulevard to Powers Boulevard. City consultants have proposed both incremental and transformational changes for the roadway for the public to review and provide comments. The plans were presented in a recording after the windstorm in December canceled the public meeting.

"This is a way to look at the whole corridor holistically," said Aaron Egbert, a city senior engineer. The work is needed, in part, because the corridor is expected to see more traffic as residents move into Banning Lewis Ranch and start using the corridor.

Once finalized, some of the projects in the plan for Platte could be funded by the third extension of the Pikes Peak Rural Transportation Authority, which levies a 1% sales tax to fund road projects. The individual projects would be listed as part of the ballot request expected potentially in 2022.

Both options for downtown Platte Avenue would reduce the number of travel lanes from Cascade Avenue to Wahsatch Avenue to slow traffic down.

The more incremental approach would reduce the number of lanes to two in each direction with a landscaped median in the middle. While the transformational approach, would narrow the travel lanes to one in each direction and introduce diagonal parking. The extra space could be used for downtown community events as well. For example, along the edge of Acacia Park, festival tents could go up, consultant Kelly Leadbetter said.

The city is also considering reducing the travel lanes along east Kiowa and Bijou streets to two lanes to slow traffic and dedicate more space for sidewalks and landscaping, the presentation showed.

As part of the change both roads would only have two travel lanes, a dedicated bus lane and a dedicated bicycle lane, drawings show.

The change could make both corridors safer, create fewer conflict points for traffic and a shorter distance for pedestrians crossing both roads, said Lyle DeVries, a city consultant.

The more incremental approach would reduce travel lanes along Boulder Street to one in each direction, creating space for two dedicated bus lanes and two dedicated bike lanes.

The proposed changes take into the account the residential nature of the Mid Shooks Run area, said Amy Garinger, a consultant.

"It is a beautiful area with streetscapes. ... We don’t want to lose that," she said.

The Platte Avenue and Academy Boulevard intersection could also see sweeping changes with the elimination of the on and off ramps to Academy and the introduction of two intersections on the east and west side of Academy. One of the new roads could serve a new bus stop on the eastern side of the mall that would replace the existing transfer station. The new intersections are considered an incremental change in the presentation.

The elimination of on-ramps could free up more land for development and allow for the introduction of a separated bike path that would run along the north side of Platte underneath Academy, Egbert said.

The city also needs to widen Platte to three lanes in each direction from Academy to Powers Boulevard to serve traffic that is expected to increase the area, Garinger said.

"This will help address some of the delay," she said.

Consultants also recommended improving the roadwork surrounding Platte in that area and putting in more frequent and better opportunities for crossing Platte, she said.

"This area is particularly challenging for cycling and pedestrians," she said.

To watch the recorded presentation on the Platte Avenue changes, find out about upcoming office hours on the project and provide feedback visit coloradosprings.gov/platteavenue.

As drivers navigate the construction of new bridges over Sand Creek on Platte Avenue, the city of Colorado Springs is launching a long-term pl…