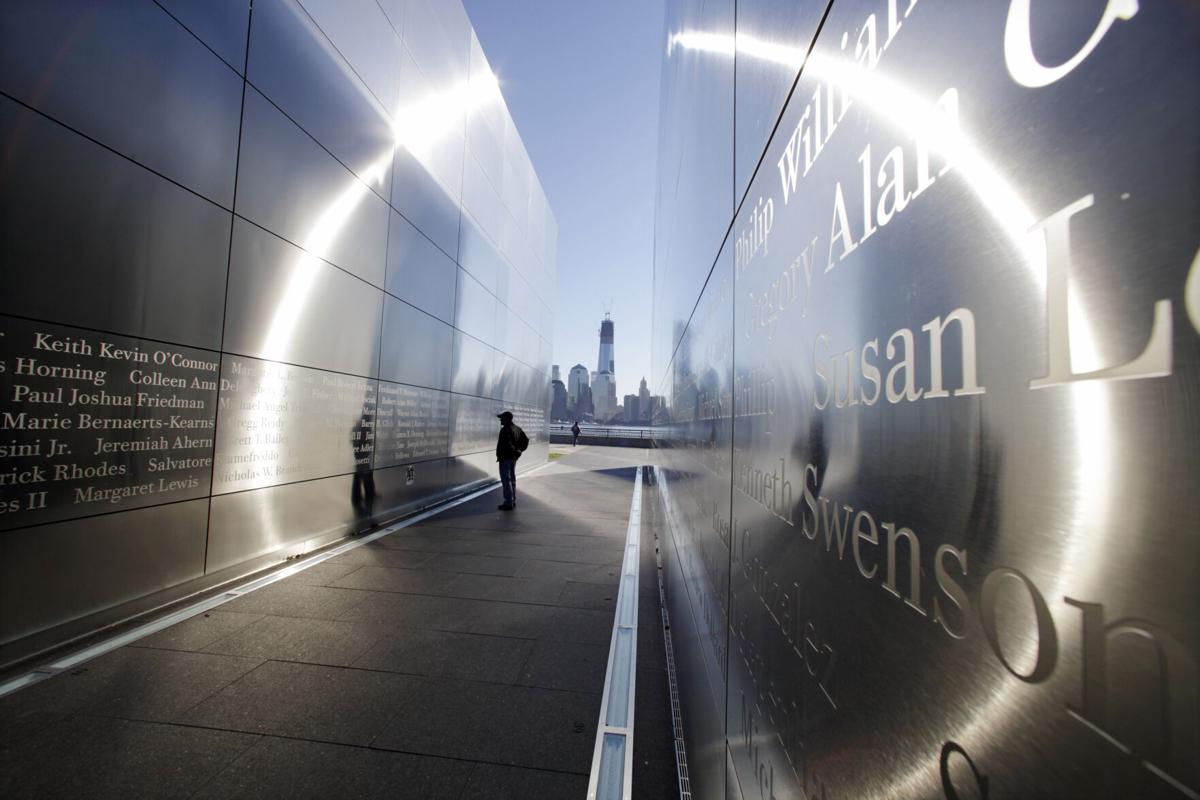 A person stops to read names in New Jersey’s memorial to the 749 people from the state lost during the Sept. 11 attacks on the World Trade Center, as One World Trade Center is seen across the Hudson River from Jersey City, N.J., in 2012. 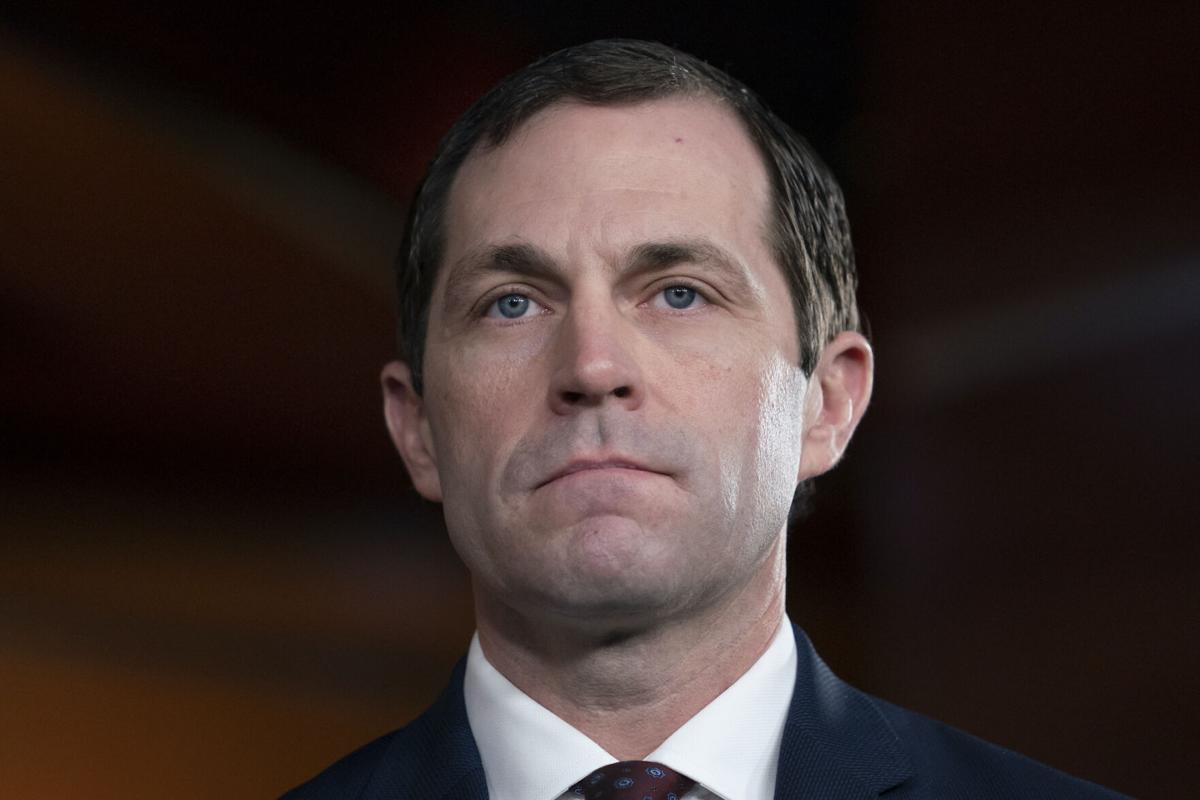 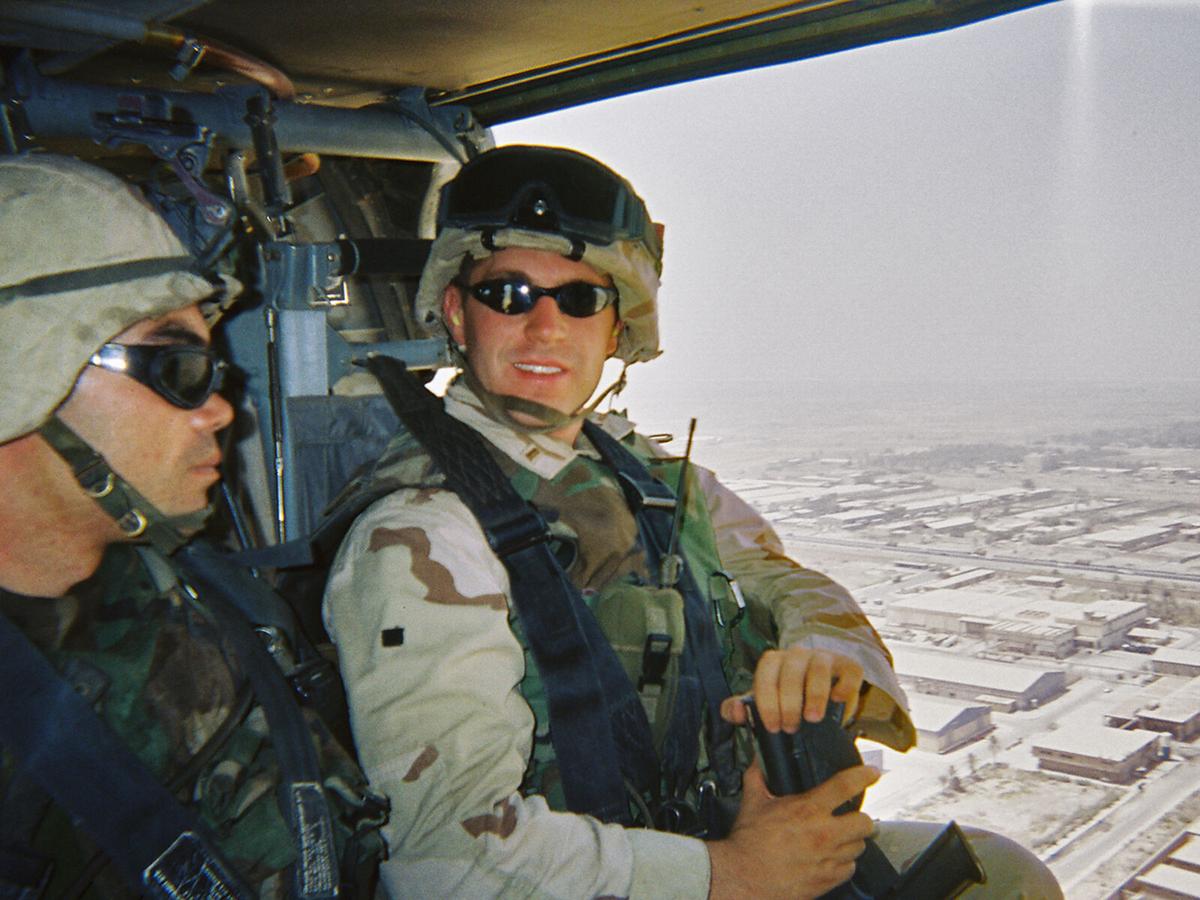 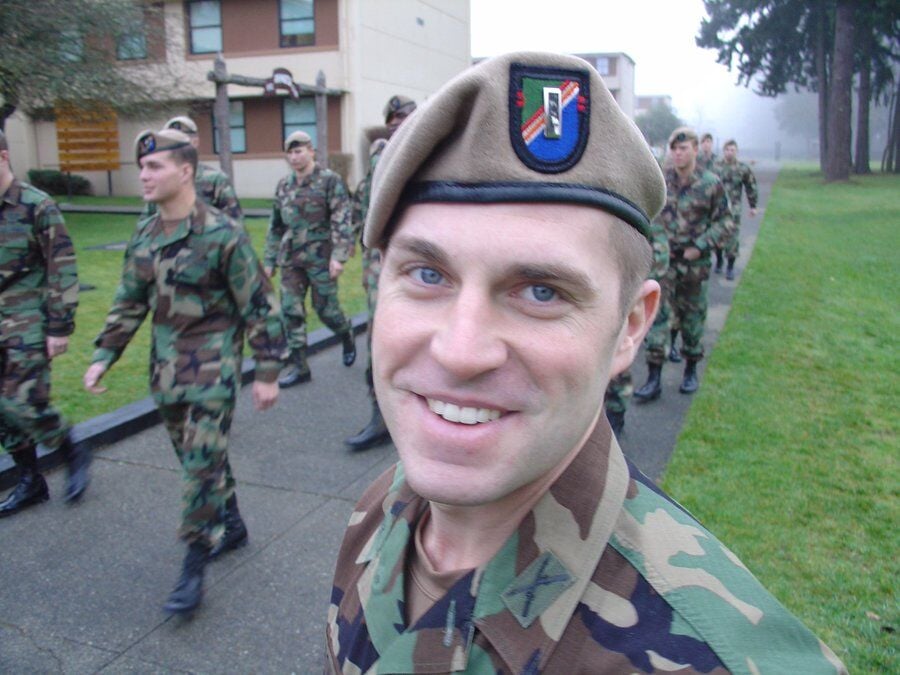 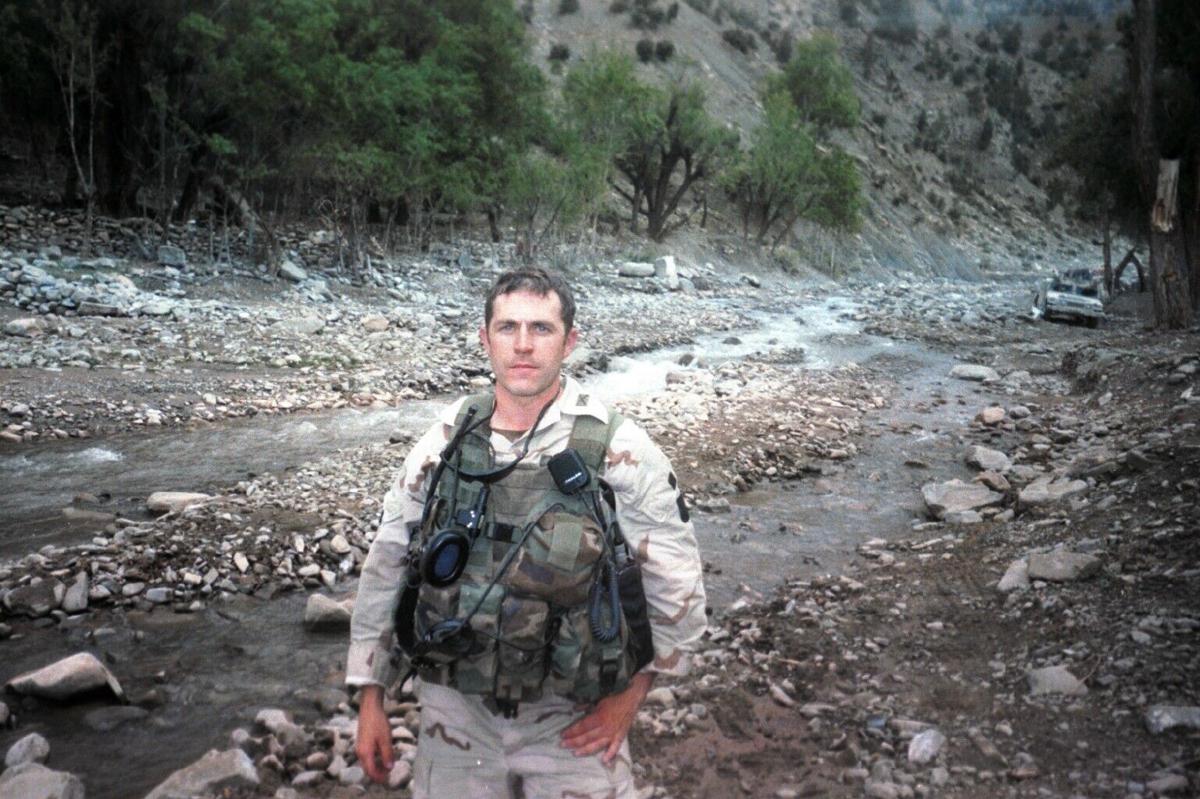 After the horrific 9/11 attacks, Jason served in the Army’s storied 82nd Airborne Division. 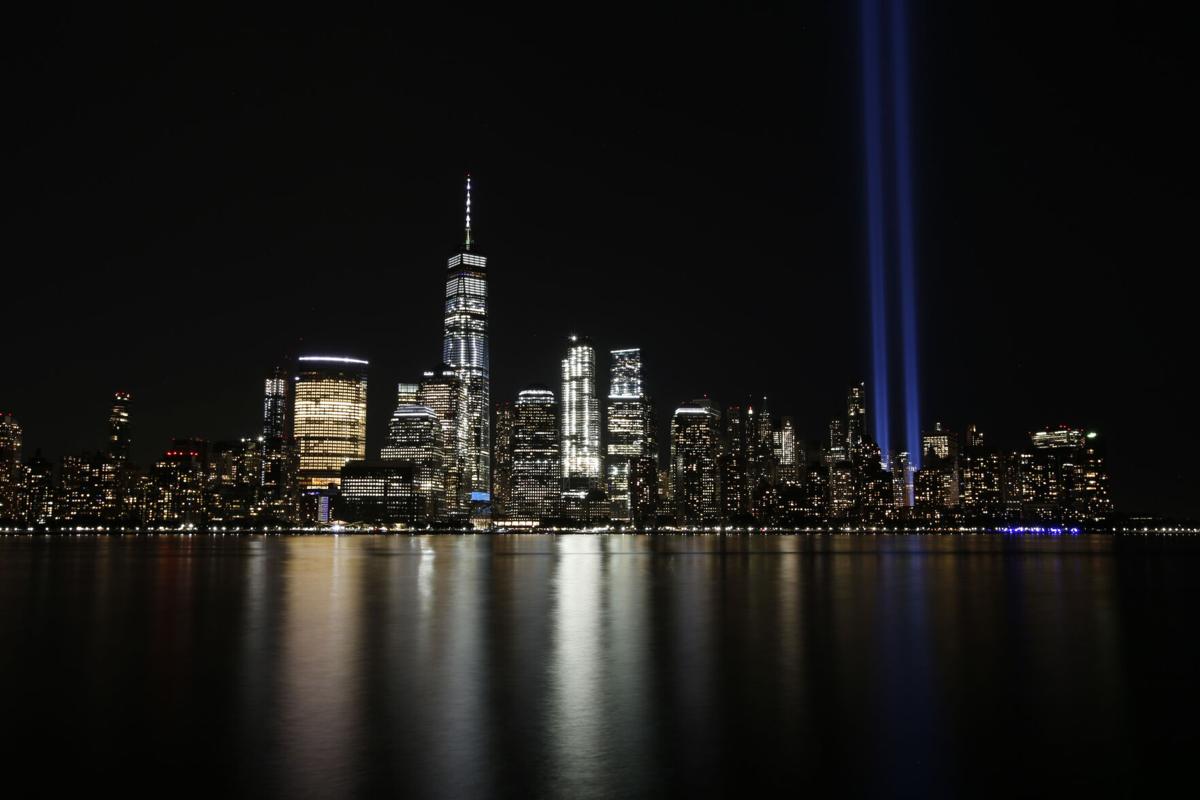 The Tribute in Light illuminates in the sky above the Lower Manhattan area of New York, as seen in 2017 from across the Hudson River in Jersey City, N.J. Sept. 11, 2001, was our generation’s Pearl Harbor. An attack, a tragedy, that exposed our obvious vulnerabilities, aroused our righteous anger, stoked our greatest fears, and summoned our greatest angels.

A person stops to read names in New Jersey’s memorial to the 749 people from the state lost during the Sept. 11 attacks on the World Trade Center, as One World Trade Center is seen across the Hudson River from Jersey City, N.J., in 2012.

After the horrific 9/11 attacks, Jason served in the Army’s storied 82nd Airborne Division.

The Tribute in Light illuminates in the sky above the Lower Manhattan area of New York, as seen in 2017 from across the Hudson River in Jersey City, N.J. Sept. 11, 2001, was our generation’s Pearl Harbor. An attack, a tragedy, that exposed our obvious vulnerabilities, aroused our righteous anger, stoked our greatest fears, and summoned our greatest angels.

We remember the day like it was yesterday. Clear blue skies, crisp fall air. And how quickly those hopeful blue skies became a backdrop for horror.

Watching the planes — commercial jets turned into catastrophic missiles — hit the Twin Towers, the Pentagon, and crash into the field in Pennsylvania. The fear, the anger, the uncertainty — but also the heroism. We remember the faces and names of the heroes of that day. From the firefighters and police officers who ran toward the danger, to the passengers of Flight 93 who pronounced “Let’s Roll” and then gave their own lives to save countless others.

We didn’t realize it on that day, but soon would: that “9/11” — a number each of us is trained from the earliest age to recognize as synonymous with “emergency” — would take on an entirely new and ominous meaning.

Sept. 11, 2001, was literally our generation’s Pearl Harbor. An attack, a tragedy, that exposed our obvious vulnerabilities, aroused our righteous anger, stoked our greatest fears, and summoned our greatest angels.

You could almost feel the shift the very next day: there was life in America before 9/11, and the life our nation would adapt to after.

Think about it on a small scale for a moment: How often did we use the phrase “first responders” prior to the events of that horrible day? Certainly not as widely or reflexively as we have ever since. And while hearing, “Let’s roll” might once have simply meant, “Let’s get in the car and be on our way…” — post 9/11, those two simple words now evoke a moment so hauntingly heroic we simply cannot shake it from our collective subconscious.

I don’t think many people realized just how much that day would change the course of our nation’s history, or the history of so many individual lives. I certainly didn’t. On that fateful day, I was starting my last year of college, serving in the National Guard, and pursuing a commission as an officer in Army ROTC. After Sept. 11, 2001, I knew we were a country about to go to war, and that I had to do my part. That next year, I transitioned from National Guard and was commissioned as an active-duty infantry officer.

Like hundreds of thousands of Americans, I would go on to serve in Iraq and Afghanistan, leading paratroopers and Rangers in combat. It was the honor of my life to defend our country and to do so alongside some of the finest men and women I will ever know.

Now, 20 years after that fateful day, many of us are now reflecting on the last two decades. The service, the sacrifice, the lost friends. This reflection is especially poignant with the closing of the Afghanistan chapter in the last few weeks. Many veterans, myself included, are reflecting on what the end of that war means for our individual service. In contemplating that question, I do so both as a combat veteran and a Member of Congress — someone whose public service started as an Army private and who now sits on the congressional committees overseeing our military.

What is clear to me is the difference between the individual service and sacrifice of our veterans and the politics and policies of any given conflict. America should always engage in vigorous debate about the merits of any conflict. We should always ask the tough questions of elected officials who make the most solemn decision of sending our men and women into harm’s way.

The conflicts of the last 20 years are no different. We can and must have an honest discussion about the successes and failures of our combat missions in Iraq and Afghanistan. It’s a long and complicated story and one that requires a full and honest assessment. I am committed to engaging in that assessment in the years ahead so we can learn from our mistakes and do better in the future.

But at the same time, we must recognize the countless acts of service and sacrifice from millions of Americans and their families over the past 20 years. For hundreds of years, generations of Americans have stepped up to take the oath and to stand in the breach. They have answered the nation’s call in our time of need.

The oath ceremony still inspires me. Watching men and women raise their right hand and promise to defend our nation and Constitution with their lives is a transformative and honorable act. But there is more to it than defending our nation. Men and women at war also fight for each other. They protect the person to their right and their left, their brothers and sisters in arms. They also take the place of someone else who would have had to do the job if our servicemen and women hadn’t volunteered. Our service members ask the questions: If not me, who? And if not now, when?

The bottom line is that there is a big difference between the politics and policy of any conflict and the individual service and sacrifice of our service members. There will undoubtedly be debate about the wars in Iraq and Afghanistan for years to come, we should also ensure that we uplift the stories of sacrifice, heroism, and service from the past few decades. Our veterans need and deserve to hear our appreciation now more than ever.

But aside from expressing our appreciation and uplifting stories of service, there are concrete steps we can and must take to make a difference.

First, we must honor the service and sacrifice of those who have served our country by offering the support they deserve when they get home. While representing less than 8% of the adult population, veterans constitute more than 13.5% of suicide deaths every year. It is our duty as a country to ensure they get the basic physical and mental health care they need.

Key legislative efforts like my bipartisan Veterans’ Sentinel Act would help address veteran on-campus suicide and attempted suicides so we are better able to support them in their time of need. My Veterans Improved Access to Care Act will help address severe hiring shortages within the Department of Veterans Affairs and ensure American veterans get timely, high-quality access to care. Additionally, far too many American veterans are now in our justice system. Many have not accessed resources available to them through the VA. My Justice Involved Veterans Support Act will help the VA connect with those veterans and get them the support they need.

Second, we must continue our efforts to evacuate our Afghan partners and allies from the region. For 20 years, they worked alongside us. They fought with us to accomplish our missions in Afghanistan. They did so with the understanding that if they stood with our soldiers, America would be a place where they could seek refuge. The war might be over, but we cannot leave our friends and partners behind.

That’s why this year, I brought together members from both sides of the aisle to form the Honoring Our Promises working group. This group of members — Republicans and Democrats — have worked tirelessly to do everything we can to bring our partners and allies to safety.

We passed two laws — the HOPE for Afghan SIVs Act and the Averting Loss of Life and Injury by Expediting SIVs (ALLIES) Act — to help expedite and expand the Special Immigrant Visa program. Our work is far from over.

Most recently, I introduced the bipartisan Showing American Values by Evacuating (SAVE) Afghan Partners Act, which will increase the Special Immigrant Visa cap again and broaden recipient eligibility so we can continue evacuation efforts and keep our word to our allies.

Third, a permanent tribute to the courage and sacrifice of those who served in Iraq and Afghanistan will go a long way in honoring those who have served in our nation’s longest war. I introduced the Global War on Terrorism Memorial Location Act to locate this memorial on the National Mall in Washington, D.C., alongside many other memorials honoring those who answered the call to duty in their respective generations.

Those of us who have served know the transformative power of a sacred place where veterans and their families can come to reflect, remember, and heal. I will be proud to stand alongside the American people at the foot of this memorial as we reflect together on the service and sacrifice of the past 20 years.

I will continue to reflect on the past 20 years as a veteran myself, as a member of Congress, and as an American. It has been the honor of my life to serve our nation in uniform and now in the U.S. Congress. On this 20th anniversary of 9/11, let’s remember the saying that the light often shines brightest in the dark. America will continue to encounter challenges and adversity, and I have no doubt that generations of Americans will step up to meet that challenge just like they did after that terrible day 20 years ago.

Study: Pentagon reliance on contractors hurt US in 9/11 wars

Up to half of the $14 trillion spent by the Pentagon since 9/11 went to for-profit defense contractors, a study released Monday found. It's th…