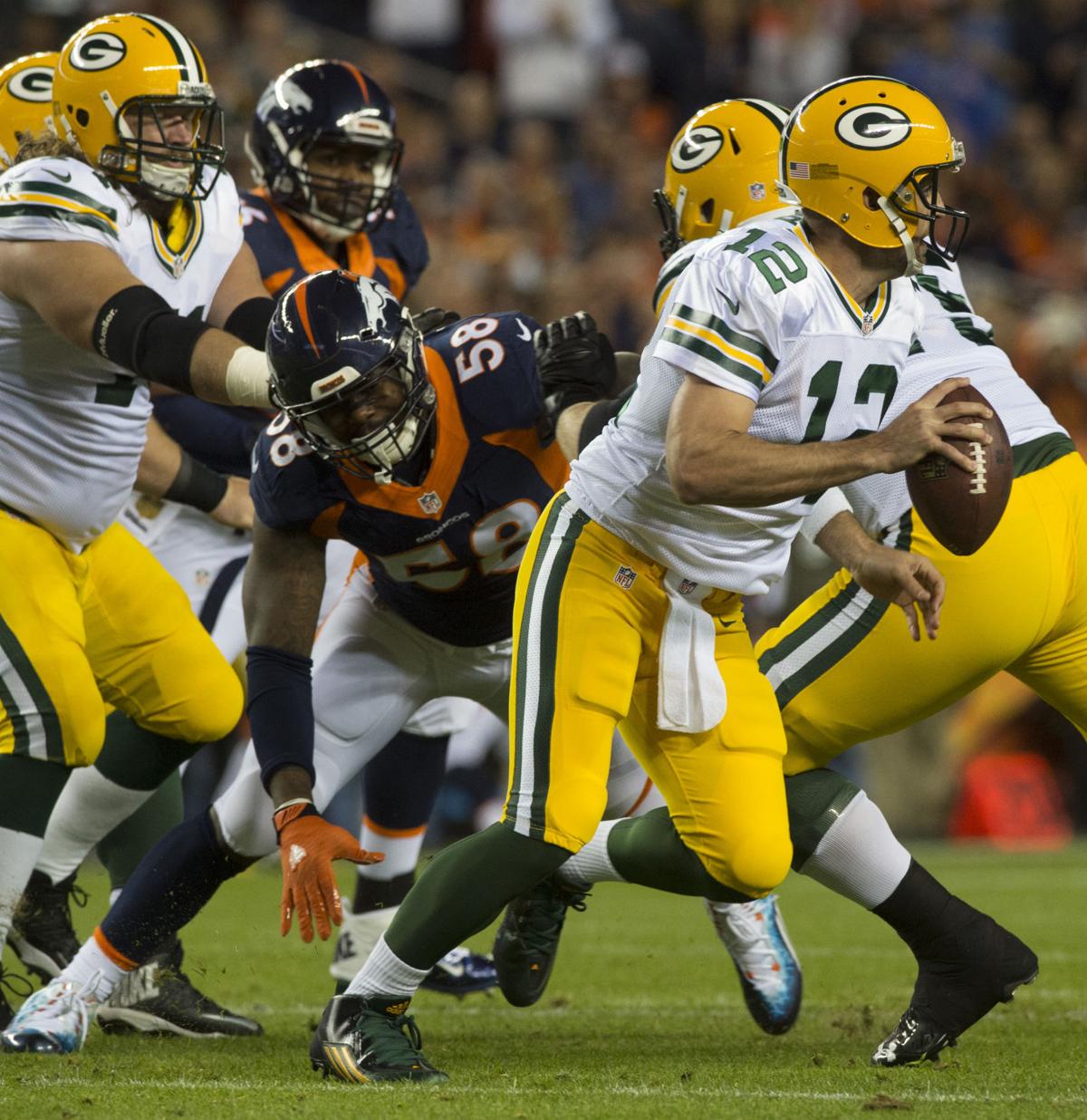 Alabama cornerback Patrick Surtain II, right, holds a team jersey with NFL Commissioner Roger Goodell after he was chosen by the Denver Broncos with the ninth pick in the NFL football draft, Thursday, April 29, 2021, in Cleveland.

Alabama cornerback Patrick Surtain II, right, holds a team jersey with NFL Commissioner Roger Goodell after he was chosen by the Denver Broncos with the ninth pick in the NFL football draft, Thursday, April 29, 2021, in Cleveland.

DENVER — With the first round in the books, the Broncos are on the clock... for Aaron Rodgers.

These days when it comes to making moves, the Broncos are a four-letter word in the NFL: safe.

The Broncos used the No. 9 pick of the draft Thursday night on a cornerback, Patrick Surtain II, when a pair of polarizing quarterbacks were still on the board. Good luck in Chicago, Justin Fields. And best wishes to Mac Jones in New England. We’ll be watching. Lord knows we’ll be watching.

Why did the Broncos pass on Ohio State quarterback Justin Fields?

But... Rodgers. He wants a new home, so we’re told. The Packers superstar wants out of Green Bay, according to insider reports. How do you take those insider reports? I’m taking that insider information as a sliver of hope. Broncos Country deserves hope right now.

This QB desert has stretched on for too long.

Full disclosure, the Broncos used the 9th pick on a fantastic player. Telling you, new general manager George Paton pegged the next Aqib Talib in Surtain, who was the SEC’s defensive player of the year and a first-team All-American at Alabama. Wait till you get a load of this guy.

Broncos coach Vic Fangio was right when he told Surtain: "We got the best corner in the draft."

Denver Broncos pick Alabama cornerback Patrick Surtain II, who wants to 'be known as one of the best in the game'

It’s safe, and there are a couple problems with safe: Chiefs superhero Patrick Mahomes is 25, and his Chargers buddy, Justin Herbert, is 23.

And the Broncos plan to counter with the QB tandem of Drew Lock and Teddy Bridgewater?

"LockWater" is as promising as it sounds.

After 16 seasons in Green Bay, Rodgers is all fed up with the Packers' shenanigans, NFL insider Adam Schefter reported. Rodgers’ beef with the Pack “is more than a contract deal,” Jay Glazer reported. The Broncos and Raiders are on Rodgers' short list, Pro Football Talk reported.

Set your Google alerts. A-Rod's status in Green Bay now should be the No. 1 offseason story in Denver.

Rodgers is 37. Manning was almost 36 when he signed here. Elway was 37 and 38 when he won Super Bowls here. This is where older quarterbacks go to win Super Bowls, and after covering Trevor Siemian, Paxton Lynch, Case Keenum, Joe Flacco and Lock, let me tell you:

This safe thing is so un-Broncos it hurts.

If you include Thursday’s first round, the Broncos had a top-10 pick in three of the past five drafts. They never took a quarterback, not once. They took Bradley Chubb (ahead of Bills QB Josh Allen), traded down for Noah Fant, and, this time, jumped at the chance to take Surtain.

All three look to be outstanding players. All three are solid humans you want on your team. All three don't fix the No. 1 issue facing the Broncos since Manning rode off into the sunset five long, wandering years ago: franchise QB.

"We like the two (quarterbacks) we have," Paton said late Thursday.

Go get Rodgers, or the Broncos are playing for third. They’re a team that plays it safe, and safe is not what made the Broncos the Broncos.

It was only a couple years ago Aaron Rodgers was here in Colorado attending a show at Red Rocks. And it was just last summer Rodgers rolled through Greeley to buy a cowboy hat. Guy fits right in, Paul Klee writes.