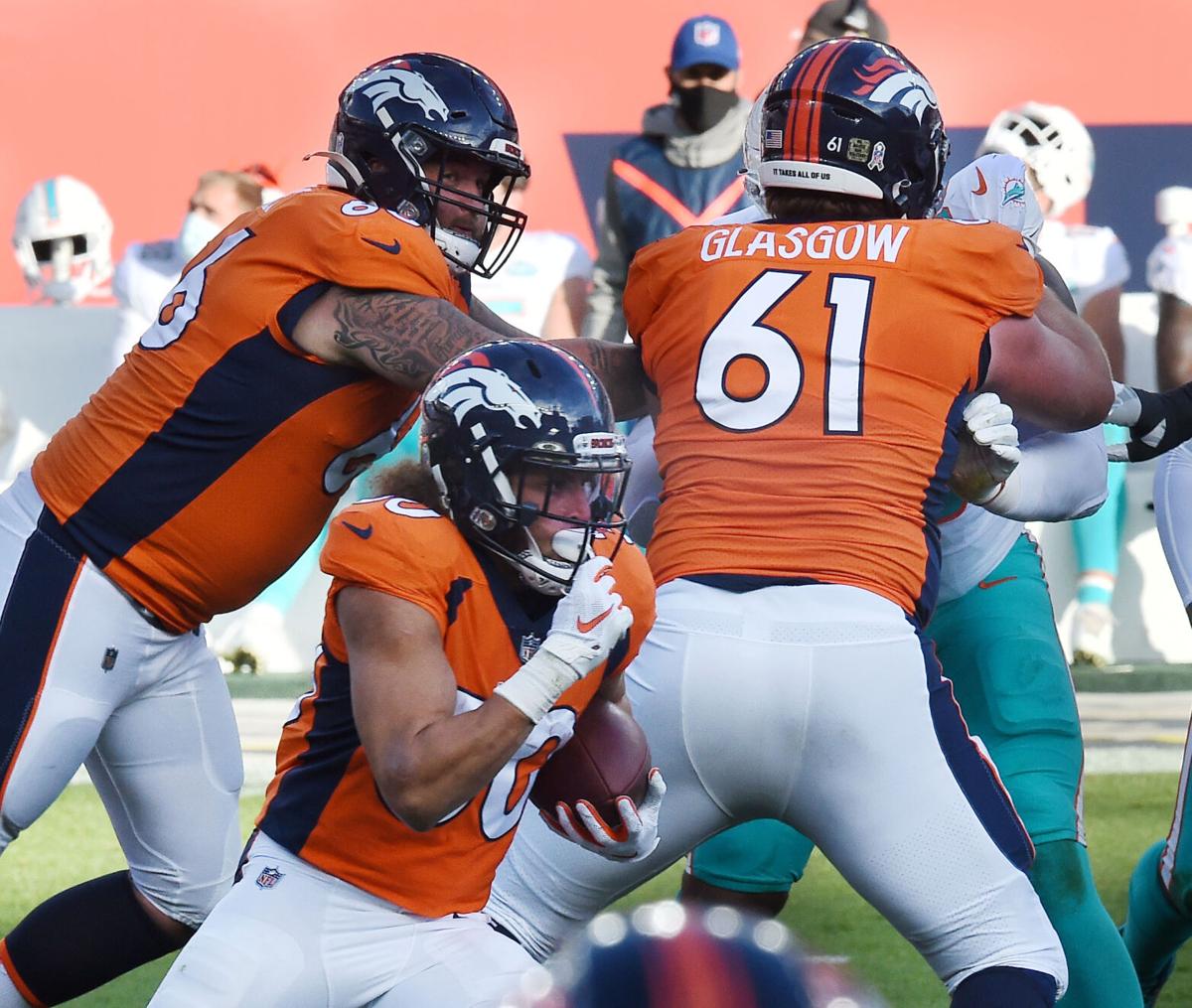 Broncos guards Dalton Risner and Graham Glasgow block while running back Phillip Lindsay runs the ball Sunday against the Dolphins in Denver. 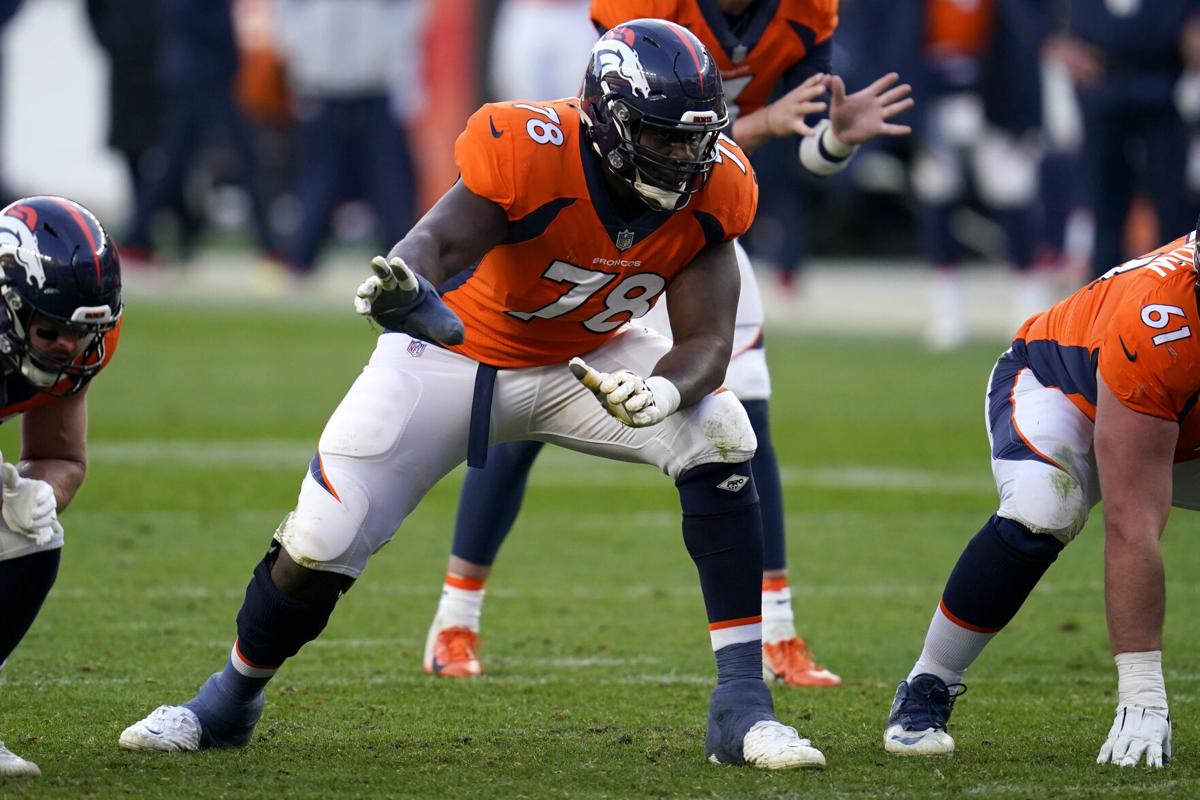 Denver Broncos offensive tackle Demar Dotson (78) against the Miami Dolphins during the second half of an NFL football game, Sunday, Nov. 22, 2020, in Denver. (AP Photo/David Zalubowski) 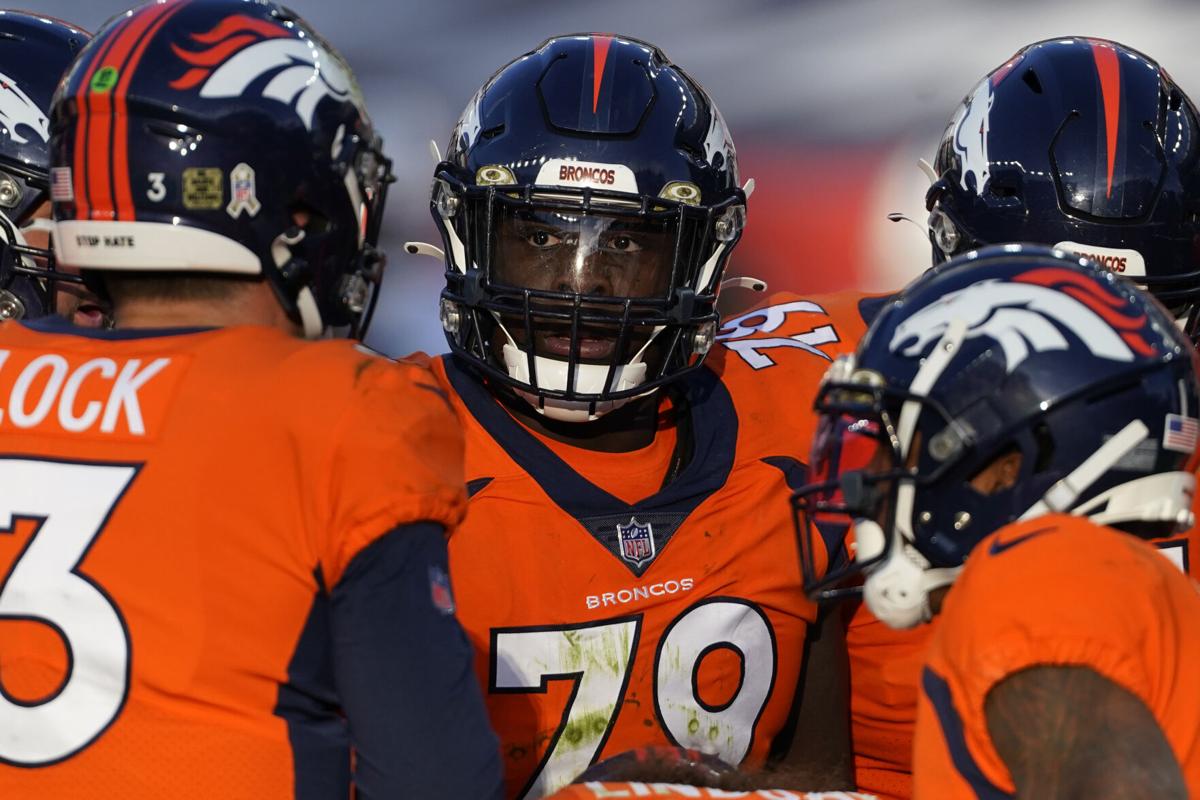 Denver Broncos center Lloyd Cushenberry (79) in the huddle during the first half of an NFL football game against the Miami Dolphins, Sunday, Nov. 22, 2020, in Denver. (AP Photo/Jack Dempsey)

Broncos guards Dalton Risner and Graham Glasgow block while running back Phillip Lindsay runs the ball Sunday against the Dolphins in Denver.

Denver Broncos offensive tackle Demar Dotson (78) against the Miami Dolphins during the second half of an NFL football game, Sunday, Nov. 22, 2020, in Denver. (AP Photo/David Zalubowski)

Denver Broncos center Lloyd Cushenberry (79) in the huddle during the first half of an NFL football game against the Miami Dolphins, Sunday, Nov. 22, 2020, in Denver. (AP Photo/Jack Dempsey)

DENVER — The uh-oh moment arrived early this time. Early, even for these bum-luck Broncos.

On his third snap, quarterback Drew Lock flung an interception into the arms of Miami Dolphins defender Xavien Howard. It was right about then most of Colorado squinted its eyes and clenched its jaw, thinking the same thing: Uh, oh. Here we go again.

Then something wild happened. Something that changed the game without happening in the game. Broncos hugger Dalton Risner found Lock down on the sideline at Empower Field at Mile High. Sought him out. And Risner wrapped Lock into a bear hug that would smother a non-NFL person.

"I don't know how much it helped him. Maybe he could talk to you and he'd say 'Man, Dalton's annoying as heck. I wish he would stop talking to me,'" Risner said after the Broncos finished off the Dolphins, 20-13.

Not after Sunday, I'm sure of it.

Day after day during the COVID-19 pandemic, it’s a tough day to be a human. While politicians deliver rules they sometimes follow themselves, while Amazon's billionaires stack another billion in their pocket, the everyday man, woman and kid outside the public spotlight struggle along.

During a truly inconsequential football game in comparison, those good folks are the offensive linemen. They're the first ones to get the blame, last to get the credit. They're Garett Bolles, Dalton Risner, Lloyd Cushenberry III, Graham Glasgow and Demar Dotson. In front of 5,700 fans on Sunday, the Broncos’ everyday guys brought 1,552 pounds of muscle and mean to the Dolphins and a needed smile to Colorado.

"Our offensive line blocked their butts off," Lock said.

How did the Broncos pile up 459 yards of offense for their highest total this season? Look to the trenches, where Risner delivered a wallop and Bolles was right there to tell the Dolphins all about it. Sure, Melvin Gordon gets the fantasy points for a 20-yard touchdown run that turned out to be the game-winner. But it was Risner who crushed a helpless defender to make the scoring run possible, and Bolles smack-talked the Dolphins all the way to the end zone.

“It wasn’t perfect,” Risner said, “But we owned the man on the other side of the line of scrimmage.”

So this one’s for the unsung heroes in a tough, tough world at the moment. It’s for the King Soopers checkout clerks dealing with cranky customers. It's for the RTD drivers transporting our people to and from. It’s for the bartenders who now can’t tend bar. It’s for the folks who make Colorado go. It’s for my spectacular wife, whose work days in a Denver-area emergency room have never been tougher. Still, she goes. Never misses a day. Thank you, health care workers.

Here in the silly world of sports, it’s the offensive linemen who only get noticed when something goes wrong. Not this time, not these days. This one's for them.

It’s for Conner Jones, Alec Falk, Jackson St. Aubyn, Will Lottes and Max Paulik. Those are the big heavies on the offensive line over at Palmer Ridge, one win away from another state title game. Oh, senior quarterback Luke McAllister is the real deal. Five touchdowns in a playoff game? Take it easy on 'em, Luke.

But it’s Jones, Falk, St. Aubyn, Lottes and Paulik who kept McCallister upright in order to sling it.

Same for Air Force. You see what Adam Jewell, Kyle Krepsz, Parker Ferguson, Nolan Laufenberg and Nicholas Noyen did to those poor Lobos on Friday? The Falcons had 356 rushing yards. 356!

“All love for the boys up front,” Falcons fullback Brad Roberts tweeted.

And Sunday was all love for the Broncos offensive line. Sunday was their finest game in years. There was Bolles, pulling from left tackle to smash Dolphins safety Brandon Jones on a running play that gained 8 bruising yards. Bolles screamed a primal scream over at the Miami sideline, and when's the last time a Broncos offense screamed at anyone other than itself?

If you design a blueprint for a Fangio victory, it looks like this: six sacks on ‘D,’ 189 rushing yards on ‘O.’ Lock, the quarterback, was simply a passenger, and guess what? Broncos win.

“Getting the running game going ... and having the defense play well ... it turns it to where it’s not a game you’ve got to throw it every play,” Fangio said.

It’s a barrel of fun to see Tim Patrick pile up 119 receiving yards, and a kick in the pants to see an undrafted worker bee like Malik Reed score a couple of sacks. But with 30 seconds left, running backs Gordon and Lindsay shared identical statistics — 15 rushes for 84 yards apiece.

Now that's a time when big guys are beautiful.

Sure did, and the Broncos are at their best when they are bullies. Offensive linemen are forever the unsung football heroes. As the Broncos O-line grunted into the tunnel after the final horn, Risner pointed at someone up in the stands.

Back 'atcha, big fellas. This one was for you.

The Broncos won one Sunday for Floyd Douglas Little, No. 44 in your program and No. 1 in our hearts, columnist Woody Paige writes.