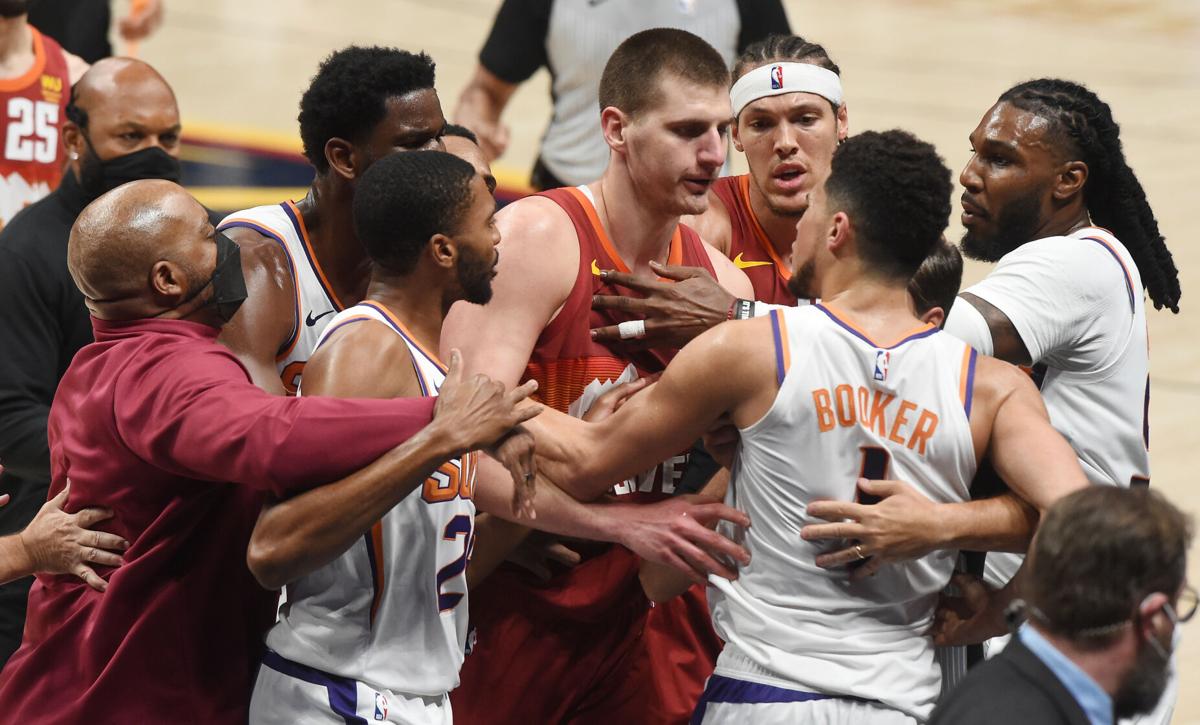 Denver’s Nikola Jokic and Phoenix’s Devin Booker get into a fight as their teammates try to pry them apart. Joker got a flagrant foul on the play on Phoenix’s Cameron Payne and was ejected from the game in the third quarter of game 4 of the conference semifinals at Ball Arena on Sunday, June 13, 2021. (Photo by Jerilee Bennett, The Gazette) 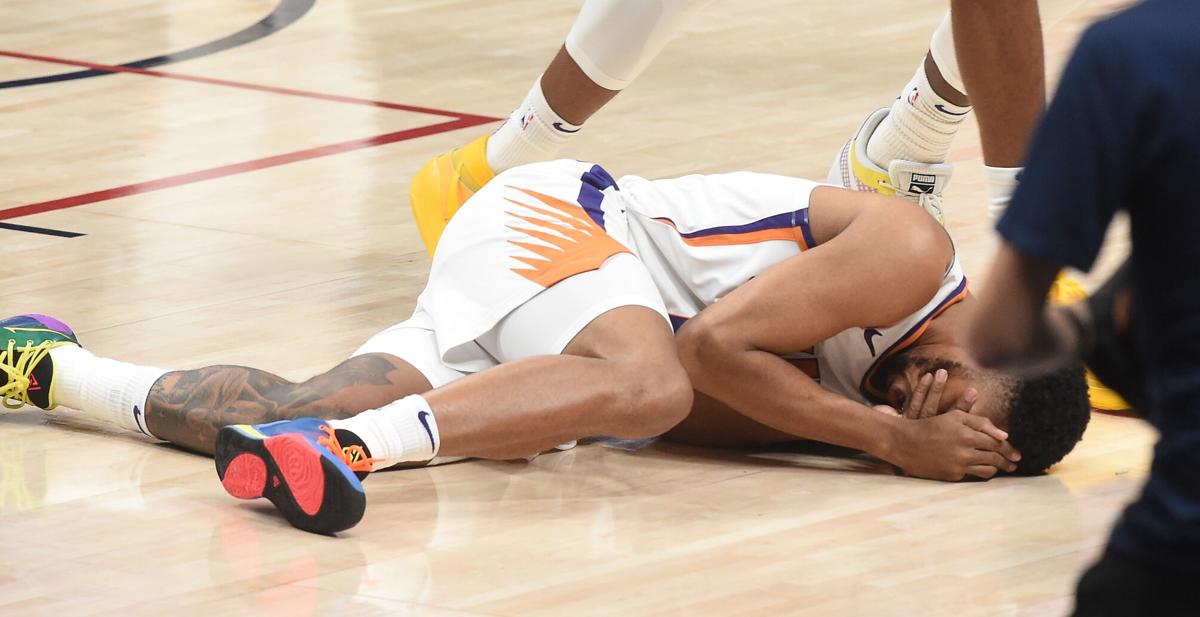 Phoenix’s Cameron Payne lays on the floor after being fouled by Denver’s Nikola Jokic during the second quarter of game 4 of the conference semifinals at Ball Arena on Sunday, June 13, 2021. (Photo by Jerilee Bennett, The Gazette)

Denver’s Nikola Jokic and Phoenix’s Devin Booker get into a fight as their teammates try to pry them apart. Joker got a flagrant foul on the play on Phoenix’s Cameron Payne and was ejected from the game in the third quarter of game 4 of the conference semifinals at Ball Arena on Sunday, June 13, 2021. (Photo by Jerilee Bennett, The Gazette)

Phoenix’s Cameron Payne lays on the floor after being fouled by Denver’s Nikola Jokic during the second quarter of game 4 of the conference semifinals at Ball Arena on Sunday, June 13, 2021. (Photo by Jerilee Bennett, The Gazette)

This NBA is softer than a baby’s bum-bum. Stinks, too. Take Game 4 of Nuggets-Suns on Sunday night, a 125-118 loss at Ball Arena that ended Denver’s season in a Phoenix sweep. Joker got the boot with 3:52 left in the third quarter on a foul ruled a Flagrant 2. The MVP, ejected! It was so weak. If the same foul happens over at Hiawatha Rec Center, here’s what goes down: pushing, shoving, swearing ...

Check ball. Everybody plays on.

Not in this NBA, though. In this NBA the MVP gets an early shower to end a historic season.

“I watched the game in the locker room to cool off a little bit," Jokic said after.

And the fans who’d never seen an MVP wear a Nuggets uniform watched theirs lurch to the locker room with 15 minutes left in the final game of the season. Give me a break.

“I wanted to change the rhythm of the game, maybe change the whistle a little bit. So I tried a hard foul,” said Jokic, who fouled Suns guard Cameron Payne. “Did I hit him? Did I (not) hit him? We don’t know. I say sorry if I did.”

This isn’t sour grapes, not at all. The Suns were so much better than the Nuggets the matchup bordered on embarrassing. In the UFC, it’s a TKO by Game 3. The Suns were fundamentally fantastic. Chris Paul sells a pass fake as well as he sells insurance. Devin Booker boxed out Javale McGee. Credit Suns coach Monty Williams. That’s your coach of the year. Let’s get Suns-Jazz in the conference finals and eject the big markets from the spotlight at least for a year.

You know, like a veteran officiating crew ejected Jokic for a play that should have been no worse than a Flagrant 1. It says here that's a Flagrant 1 for every other player of Joker’s stature. Think Chris Paul gets tossed for slapping the ball from a guy’s hands out of frustration? Think Kevin Durant gets ejected if he’s the MVP on his home court? LeBron? If LeBron James gets fouled like that he’ll spend a week in the ICU. But LeBron’s not getting ejected for committing the foul, no way. This NBA has different rules for different dudes, and a crowd of around 11,000 paid to see the Nuggets’ scout team finish a playoff game and the season. So silly. Why does this league make it so hard to take it seriously?

"I just didn’t feel like it warranted a Flagrant 2 ejection because he was making a play on the ball,” Nuggets coach Michael Malone said.

The NBA bends over backward to grow the game overseas. Denver can kick rocks, I guess.

Southwest Airlines must be running a sale. Suns fans took over LoDo. When the series was over, they chanted “M-V-P” at Chris Paul as the series’ best player conducted a live interview with TNT.

The last time Denver was swept out of a playoff series it was Kobe Bryant’s Lakers sweeping the Iverson-Melo Nuggets in 2008.

Yes, these Nuggets played without Jamal Murray since April. Yes, Joker was huffing and puffing through his 82nd game out of a possible 82. Yes, the Nuggets overachieved in earning the No. 3 seed and winning a series vs. the Blazers.

But the front office has work to do. Boy, does it have work to do. The Suns and Jazz passed the Nuggets this season, and it’s not like the Lakers and Clippers are going to stand down for long. Jokic had 100 points over 3.5 games and needs help. For the Nuggets to make up lost ground, they could look to free agency and a pipe dream (Lonzo Ball), a pricey addition (Lauri Markannen) or a getable role player (Tim Hardaway Jr.).

But they’ll need some serious growth from the players already in the program, namely forward Aaron Gordon, who arrived at the trade deadline and vanished in prime time against the Suns: nine points and four rebounds per game at $16 million per year. That won’t cut it here, back with the Orlando Magic, or on the moon.

The Nuggets were down 83-75 when Jokic got ejected. It was still a game, if not a series. He swiped at the ball and appeared to brush the face of Payne, who crumpled to the court. Booker, the Suns star, rushed over to get in Joker’s grill — and that’s where things really got interesting. Nikola’s brothers sprinted down the aisle between Sections 126 and 128 and were stopped by security at court level. Nemanja and Strahinja used to stay in shape at a local MMA gym, and, as Danilo Gallinari once told me: "You don't want to fight them."

“That’s what family do. We got each other’s back,” said Jokic, who didn't see his brothers. “I always know that they are going to be there.”

During halftime I met up with the founder of Joker’s Serbian Orthodox church in Lakewood.

“He is a very good man,” Father Radovan Petrovic said of Jokic.

And these are some very good fans who didn’t pay to watch Javale McGee close out a playoff game. Shame on the NBA for removing the MVP on that whistle. Diehards waited 50-plus years for a player like this. For Denver, the best part of the series would have been Joker's curtain call.

The Nuggets did not crawl off the court and out of the playoff on their bellies.