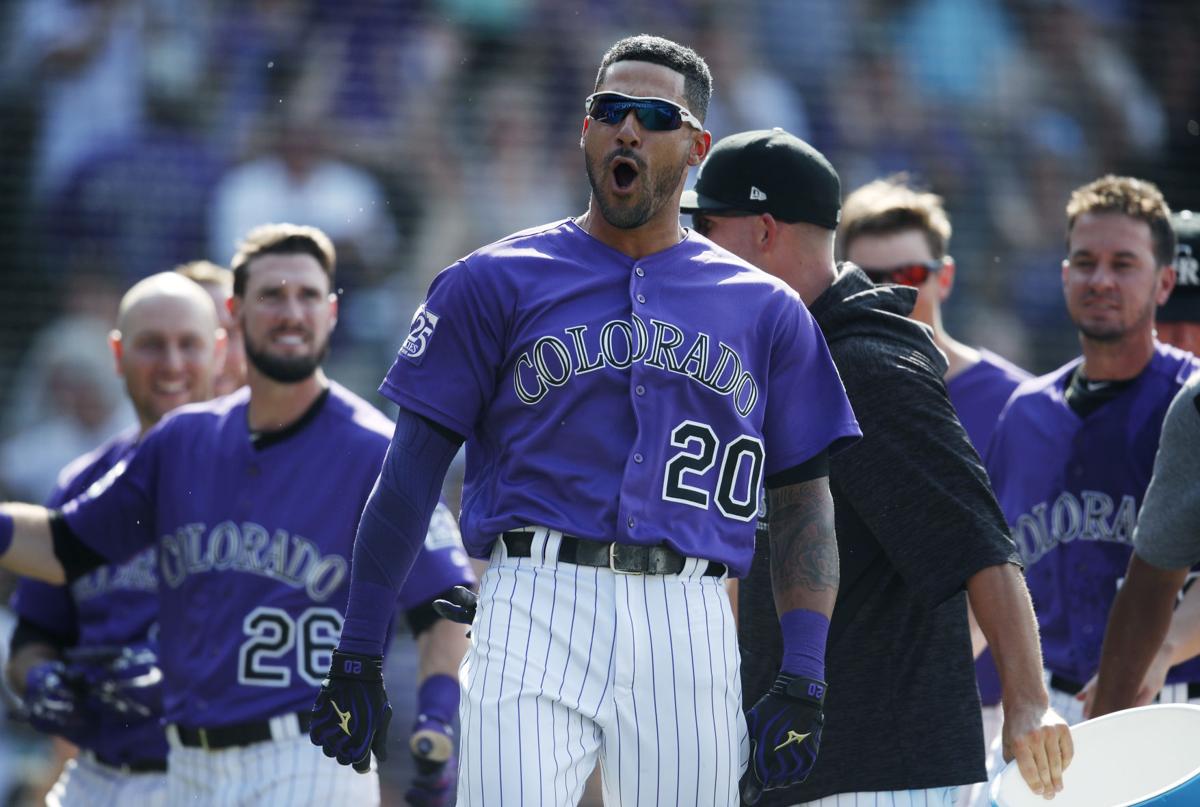 Colorado’s Ian Desmond celebrates with teammates after his two-run, walk off home run in a 4-3 win over San Diego on Thursday in Denver. 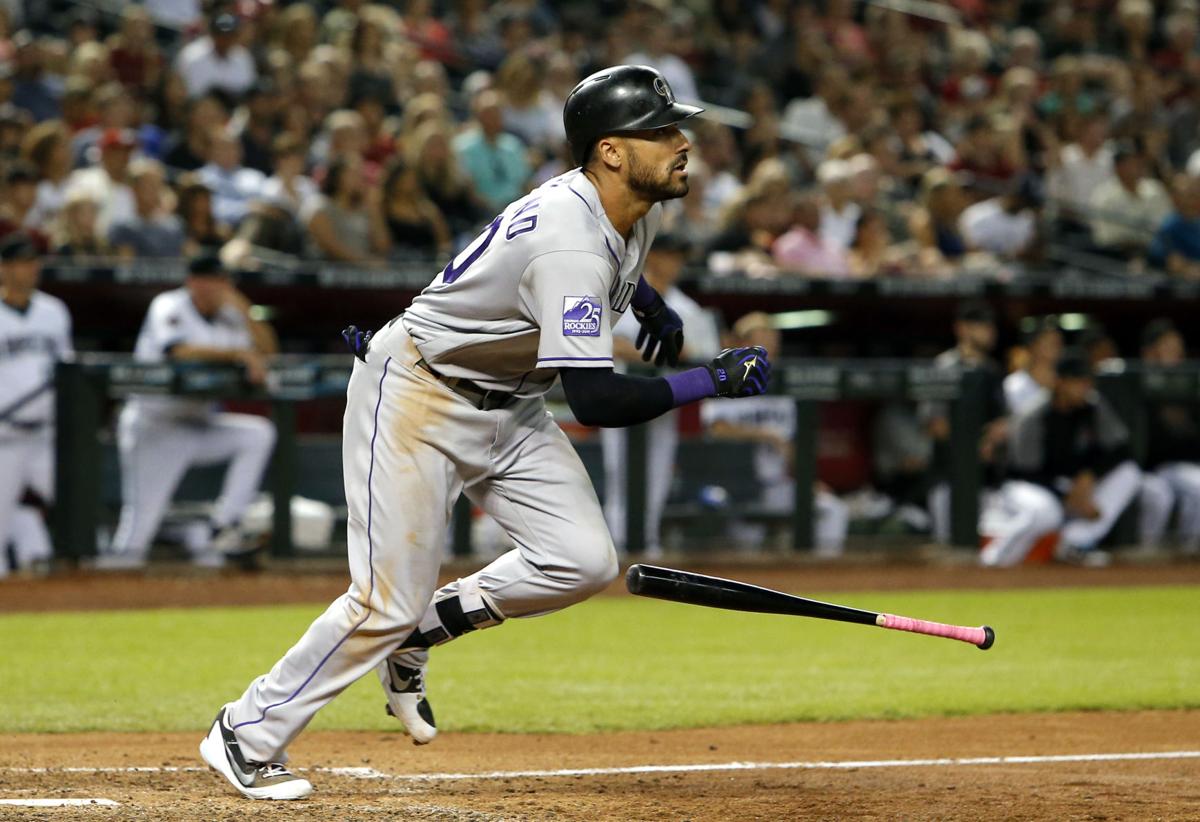 Colorado Rockies’ Ian Desmond watches his two-run single during the eighth inning against the Arizona Diamondbacks on Friday in Phoenix.

Colorado’s Ian Desmond celebrates with teammates after his two-run, walk off home run in a 4-3 win over San Diego on Thursday in Denver.

Colorado Rockies’ Ian Desmond watches his two-run single during the eighth inning against the Arizona Diamondbacks on Friday in Phoenix.

DENVER — The gap between Joe Millionaire Athlete and Joe Fan has never been wider.

They’re not moving toward a common ground, either.

Ian Desmond's decision to skip the 2020 Major League Baseball season is 100 percent within the scope of understandable. The Rockies outfielder cited a list of reasons that are valid in his mind. The threat of the coronavirus pandemic. Racial injustice. A pregnant wife at home. Who are we to say what should be important to a 34-year-old husband and dad of (soon-to-be) five?

Desmond explained his decision Monday on Instagram. His post focused largely on the topic of race: "If we didn’t force Black America into white America’s box, think of how much we could thrive.”

What's also understandable is the reaction from a solid chunk of the population: Boy, that’s some serious oppression, being forced to choose between $5.5 million or skipping work.

There are 40 million unemployed right now, so I understand where they are coming from, too.

Everyday folks waiting on stimulus checks can’t grasp how athletes would decline a paycheck. Rich athletes can’t comprehend how baseball or basketball are going forward during a pandemic.

It all results in a seismic change that’s shaking up sports fandom as we knew it. Combine the economic times, the polarizing protests, the coronavirus pandemic, and fans are kind of like the players who are opting out. Both are prioritizing their lives: family, job, health. Sports might not make the cut anymore. Unconditional fandom is not a given anymore. Where that hits sports the hardest is yet to be seen, though history suggests it’s usually in the wallet. The NFL’s TV ratings tanked 20 percent after Colin Kaepernick took a knee during the national anthem. If the Teflon NFL is utterly vulnerable, executives in the other sports leagues must be nervous as all get out.

Anyway, Desmond. He’s the fourth MLB player to opt out of the season. There will be more, though Rockies general manager Jeff Bridich said Tuesday he doesn’t expect more Rockies.

“To my knowledge right now, I don’t,” Bridich said.

That could change, of course. Anything could change. What won’t change, judging by the heartfelt tenor of Bridich’s address, is Desmond’s standing with the Rockies. The general manager threw his unequivocal support behind Desmond’s decision to opt out. While Desmond forfeits roughly $5.5 million in salary, the outfielder still has two years and $23 million left on a $70 million Rockies contract that will be honored without question, Bridich said.

“When Ian and I spoke, we made it very clear to each other that none of this would change our relationship, our support, any of that,” Bridich said. “It doesn’t change what we’re going through in this country and the realities of it. All of it affects people different. I think it would be pretty shortsighted and naïve to change a relationship because a family makes a decision on what’s best for them.”

Oh, yeah. A baseball thing: the Rockies also agreed to a deal with Matt Kemp, whose name was mud when he played for the Dodgers. Kemp battered the Rockies. His .314 average against the Rockies trails only his stats against the Mets (.319) among National League opponents.

“We’re well aware of the damage that he’s done against us,” Bridich said with a laugh.

Why is Ian out? His social-media explanation included:

Racism in the game: “The golden rules of baseball — don’t have fun, don’t pimp home runs, don’t play with character. Those are white rules.”

An allusion to his struggles with the Rockies: “It's no coincidence that some of my best years came when I played under Davey Johnson, whose No. 1 line to me was: ‘Desi, go out there and express yourself.’ If, in other years, I’d just allowed myself to be who I was — to play free and the way I was born to play, would it have been better?”

The coronavirus: “The COVID-19 pandemic has made this baseball season one that is a risk I am not comfortable taking.”

Sports fandom is changing. What's being discussed in the cheap seats right now is not the usual sports talk. It’s not, “Are the Broncos going to the playoffs with Drew Lock?” It’s not, “Will the Rockies really trade Nolan Arenado?” It’s more along the lines of, "Everyone in your family healthy?” and "Find a new job yet?"

And each time NBA superstar LeBron James takes a hard-line political stance, or an NFL player kneels during the national anthem, or a ballplayer is cool with losing $5.5 million, another chunk of fans reexamines its dedication to professional sports. I'm not saying that’s the right approach or the wrong approach. I am saying this is going to be one approach: a bunch of sports fans will take their time and money elsewhere. They'll decide their favorite games aren't all that much fun anymore.

The gap is growing wider. Just as Desmond walked, some fans will too.

NEW YORK — Baseball's minor leagues canceled their seasons Tuesday because of the coronavirus pandemic, and the head of their governing body s…