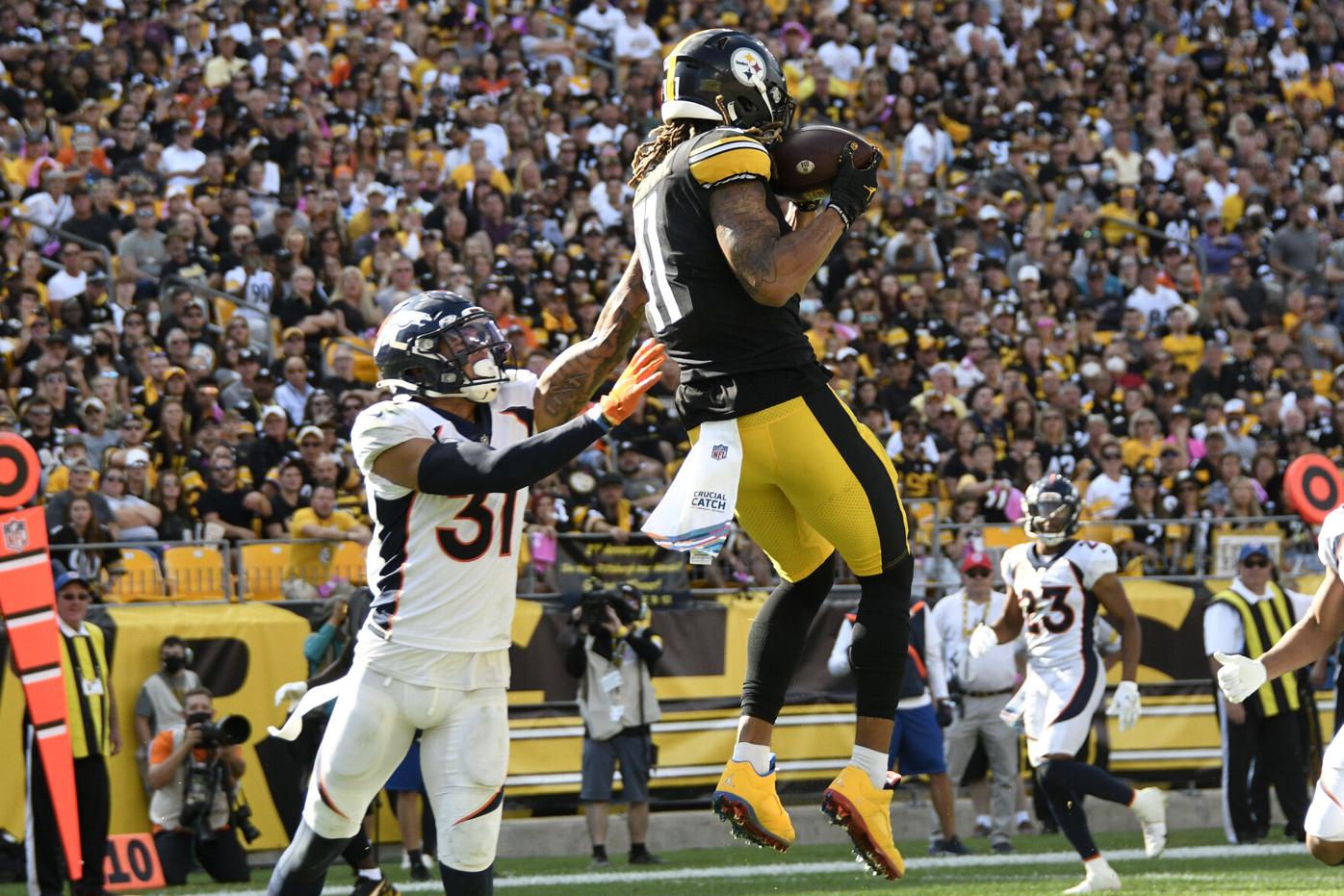 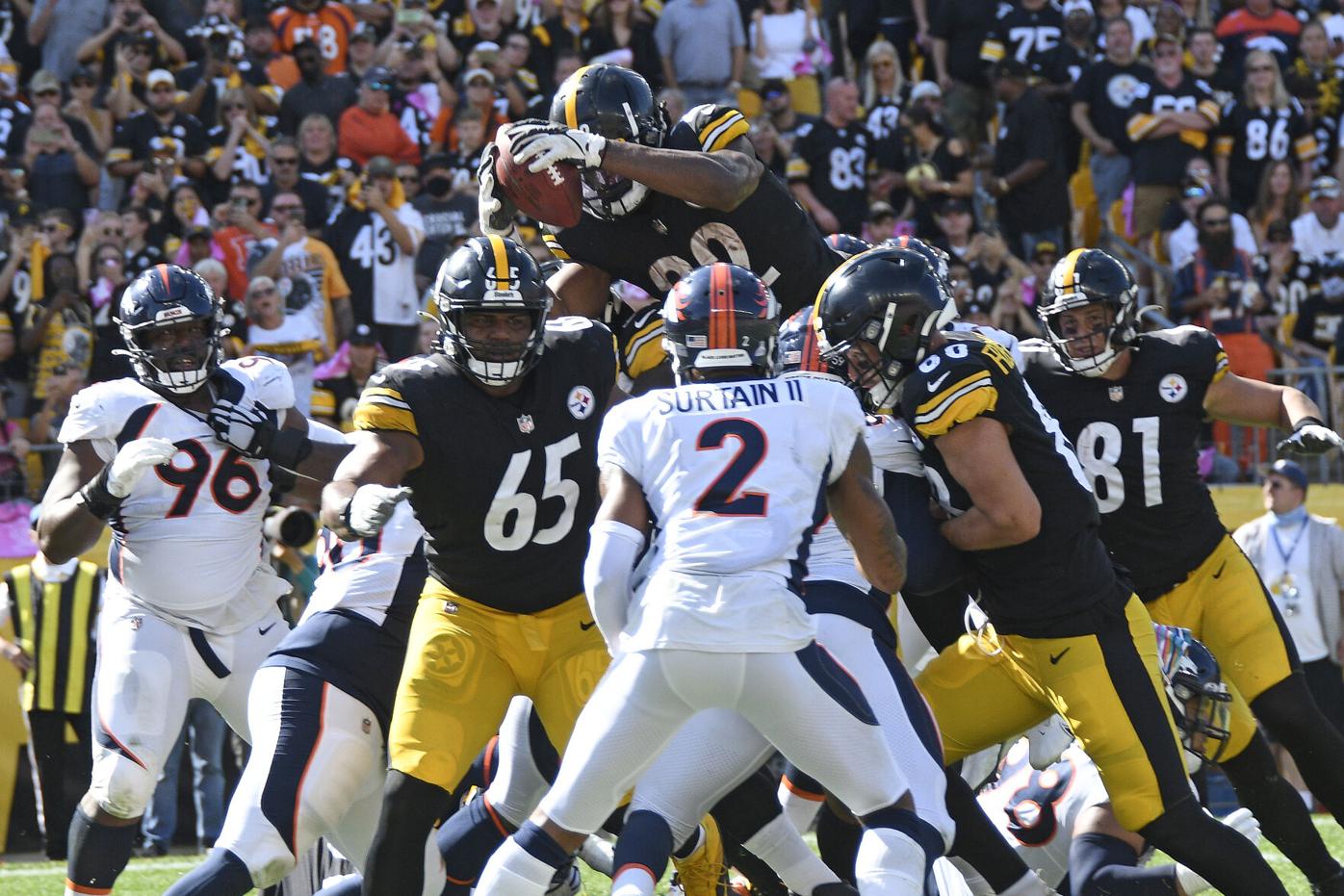 Pittsburgh Steelers running back Najee Harris, top, leaps over the goal line for a touchdown during the first half of an NFL football game against the Denver Broncos in Pittsburgh, Sunday, Oct. 10, 2021. (AP Photo/Don Wright)

Pittsburgh Steelers running back Najee Harris, top, leaps over the goal line for a touchdown during the first half of an NFL football game against the Denver Broncos in Pittsburgh, Sunday, Oct. 10, 2021. (AP Photo/Don Wright)

The Vic Fangio era is sliding around on cracked, thin ice.

Why are the Broncos players jumping up and down on the lake?

For most of Sunday’s 27-19 loss to the Steelers, the Broncos did not look like a team bound and determined to do everything it can to make sure its coach sticks around for another season. Shoot, it looked like a team ready to help him pack.

The Steelers were the latest good team (OK team? Stinky team with a cool history?) to use the Broncos as a cure to what ailed them. Pittsburgh whooped Denver good. The score doesn’t show how lopsided this one really was.

The Steelers led 24-6 before the Broncos managed a touchdown at Heinz Field, in the fourth quarter. They led 7-0 before you can pound a Yuengling, before you can say “Anyone seen Justin Simmons?”, before Kyler Fuller got burned once again. Is this a good time to mention the Steelers had lost three straight?

“The urgency has to be there,” explained Simmons, the second-highest-paid safety in the NFL.

Goodness gracious. You serious, Clark? The Broncos were 3-1, coming off a blowout loss to the Ravens, playing in a sweet stadium and one of the best football cities in the world.

How on earth is the urgency not there?

“I take full responsibility for that on the defensive end,” Simmons said.

He should take full responsibility. The whole defense should take full responsibility. Two weeks in a row the defense has played like it can’t be bothered to save the coach’s job, and Denver’s defense is the side of the roster that A) reports straight to Fangio, the coach on the hot seat and B) accounts for most of the Broncos’ payroll. You wouldn’t know either of those things if you watched the first three quarters Sunday.

Or last Sunday against the Ravens.

Against a Steelers team that averaged 17 points per game, Simmons and the Broncos defense gave up 17 points by halftime. The Steelers averaged 55 rushing yards and had that by the second quarter. Twenty-seven points is the most Pittsburgh has scored this season. Gross.

“We knew coming into the game they were going to take their (deep) shots,” Simmons said.

They knew, and Steelers quarterback Ben Roethlisberger completed passes of 23, 50 and 59 yards in the first half alone. They knew, and it took the Steelers only six plays to go 85 yards for a touchdown on their first possession. It’s a really bad sign they knew and couldn’t stop it.

Simmons signed a $61 million contract extension in April. He hasn’t been worth the money, unless you value end-zone tackles. He was right there to bring down Chase Claypool when the Steelers wide receiver caught a touchdown. But Simmons was nowhere in sight when Steelers wide receiver Diontae Johnson sprinted away on a 50-yard touchdown pass. Anyone seen Justin Simmons?

“It was a tough game on (the) secondary in general,” Simmons said after.

I believed this Broncos defense was the real deal. I overestimated the Giants, Jets and Jags.

It’s hardly all his fault, but Simmons is in Year 6 with zero playoff games to show for it. That's not nothing. If the Broncos continue to whiff against competent opponents, Simmons will go into Year 7 having been a big part of two coaching changes and zero playoff appearances. That’s not a ratio an athlete wants on his resume. That’s a Jay Cutler resume, a player who’s just good enough to get the coach fired.

Fangio is 15-22 as Broncos coach, and Sunday was an example why this arrangement hasn’t worked out so far. The Broncos had the usual week to prepare for the Steelers yet somehow were hit with a delay-of-game penalty on their first snap of the game. You can’t make this stuff up. That kind of silly stuff happened with Vance Joseph, too. He got canned.

But a lot of the blame must fall on the highest-paid players, like Simmons, who is making way too much money to be a no-show against 39-year-old, wobbly, injured Big Ben. Roethlisberger's quarterback rating of 120.9 was his highest mark since Week 4... of last season.

The Broncos are sleep-walking into the tough portion of the schedule with the Raiders (3-2) and Browns (3-2) up next. Yet they perform and behave as if they have all the time in the world. Maybe they do. Maybe that's because they already got paid.

“We’ve just got to have some energy,” said quarterback Teddy Bridgewater, who was terrible for a half then led a fun near-comeback at the end. “(We) might need to do like the colleges and do ‘goal line’ and bash heads or something. Get the blood flowing, the juices flowing."

Fangio's in big trouble if the losing continues. So are the Broncos, who could learn they paid big money to guys who aren't good enough to win.

By the way, anyone seen Justin Simmons?