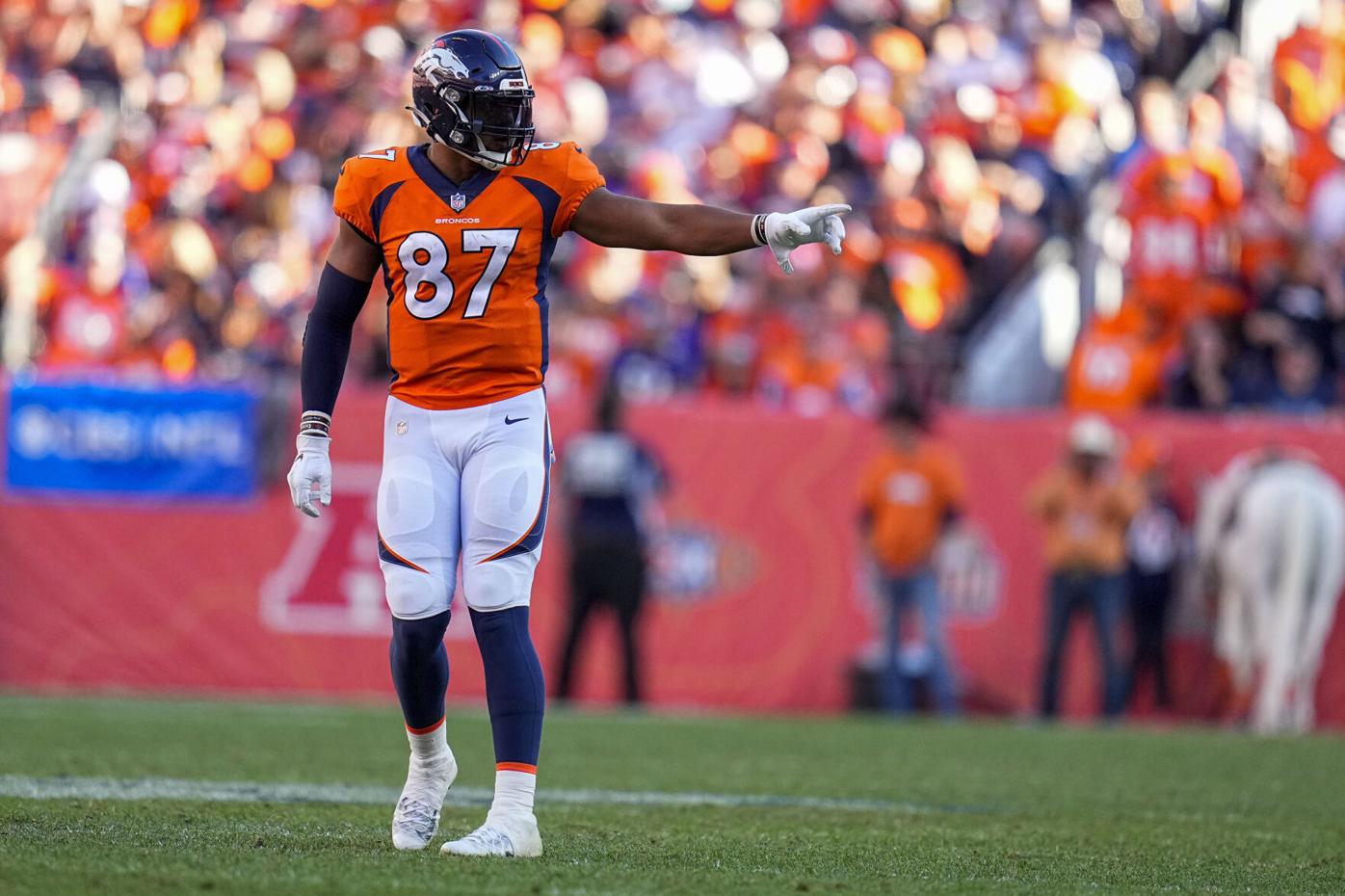 Broncos tight end Noah Fant signals on the line Oct. 3 against the Ravens in Denver. 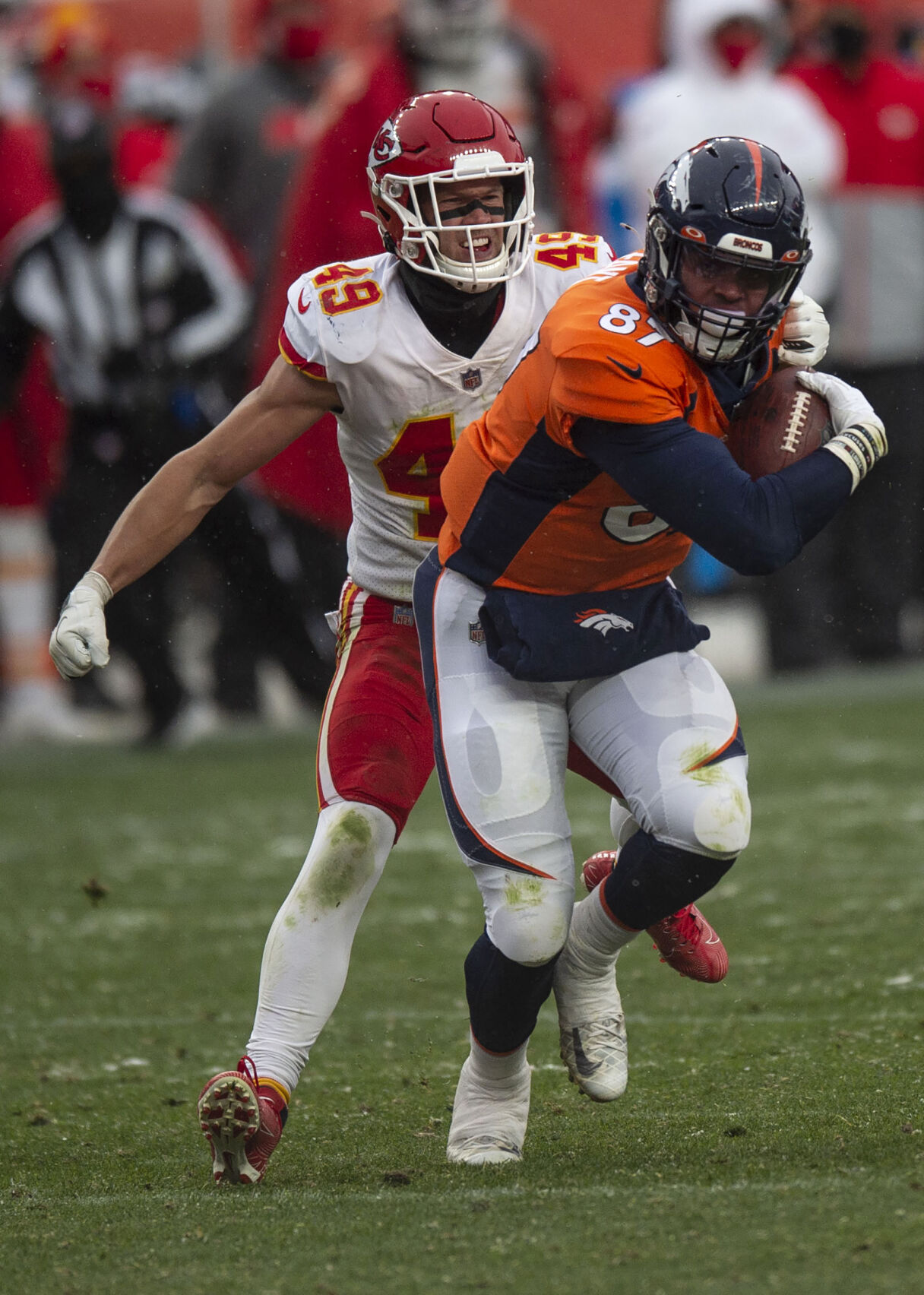 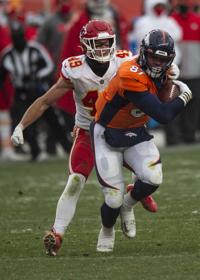 Broncos tight end Noah Fant signals on the line Oct. 3 against the Ravens in Denver.

DENVER — Noah Fant steps into a room, you notice.

Big dude, 6-4, 250. Deep voice God-made for the DIA train. Shoulders like an Air Force cadet after four years at the academy.

So here’s a Broncos mystery: how does a man so conspicuous sometimes vanish on Sundays?

Just to be transparent right off the top, this isn’t picking on Noah Fant. There’s been nothing notably bad about Fant’s 2.5 seasons here. He was the second tight end drafted in 2019, and he’s been the best or second-best tight end from that draft. Can’t ding John Elway for that one.

But — you knew a but was coming — the Noah Fant experience often leaves you wanting more.

That’s a compliment, you know, when an athlete has the kind of potential that makes you want to see more.

If the Broncos are going to reach the vast potential they claim, they need more from Fant. The Broncos starting tight end was activated from the reserve/COVID-19 list this week, and what a perfect time to return to the ballgame. Sunday he’s matched up against a Philadelphia Eagles 'D' that drives the struggle bus when it comes to stopping tight ends. No team’s allowed tight ends to score more touchdowns than the Eagles. Only one team’s allowed tight ends to rack up more receiving yards. That’s the Chiefs, who still must see Fant twice.

What I’m saying is this stretch run should be prime time for Fant to bust out of this mini-slump or whatever you call it. He has only seven catches for 47 yards in his last two games. Blah.

The Broncos need more — except when it comes to penalties, because Fant’s been flagged seven times, most among NFL tight ends. Only three (of 1,696) NFL players are more penalized. Blah.

This all paints a terrible picture for Fant, but that’s not fair and not what this is about. Couple years ago, he set Broncos records for a rookie tight end with 40 catches and 562 yards. He’s been durable and available, playing in 39 of 41 games since the Broncos took him 20th overall.

More broken tackles on third-and-7, third-and-8. That’s the biggie. Fant goes down so easy I’ve wondered to people seated next to me if him going down on first contact goes back to his concussion issues at the University of Iowa.

“There are times, unfortunately, when you (must) catch the ball below the sticks and run for (the first down),” Broncos offensive coordinator Pat Shurmur said Thursday, speaking of pass-catchers in general.

Two tight ends were drafted in the first round in 2019, and both were from Iowa. Lions tight end T.J. Hockenson (147 catches, 1,538 yards) and Fant (139 catches, 1,555 yards) have produced strangely similar numbers, but you’ll have to ask a Lions fan if Hockenson can knock a linebacker on his back with a block. I have no idea. Don't watch a lot of Lions games. But the Broncos piled up 190 rushing yards last Sunday against the Cowboys — without Fant — and that’s not exactly an endorsement of Fant.

Here’s the plan, and it benefits a whole bunch of people, especially the 23-year-old who can make a ridiculous amount of money with a big finish to this season: Go off, young man.

The opportunity is there.

This feels a little bit like a fantasy football guru telling you how to set your lineup, but it’s the facts. The Broncos have six opponents (over eight games) left, and four of six can’t stop a tight end if he’s standing still. Four of six are in the bottom third of stopping tight ends. The Eagles, Chargers and Chiefs are truly bad at stopping tight ends, and they account for five of the final eight games.

Will Noah Fant make everybody notice?

Broncos rookie Caden Sterns is exceeding expectations, even his own

DENVER — Not long after Brian Hess became the strength and conditioning coach at North Carolina, was he introduced to then-sophomore running b…