Nevada quarterback Carson Strong looks to throw a pass during the first half of the team's NCAA college football game against San Diego State on Saturday, Nov. 13, 2021, in Carson, Calif. 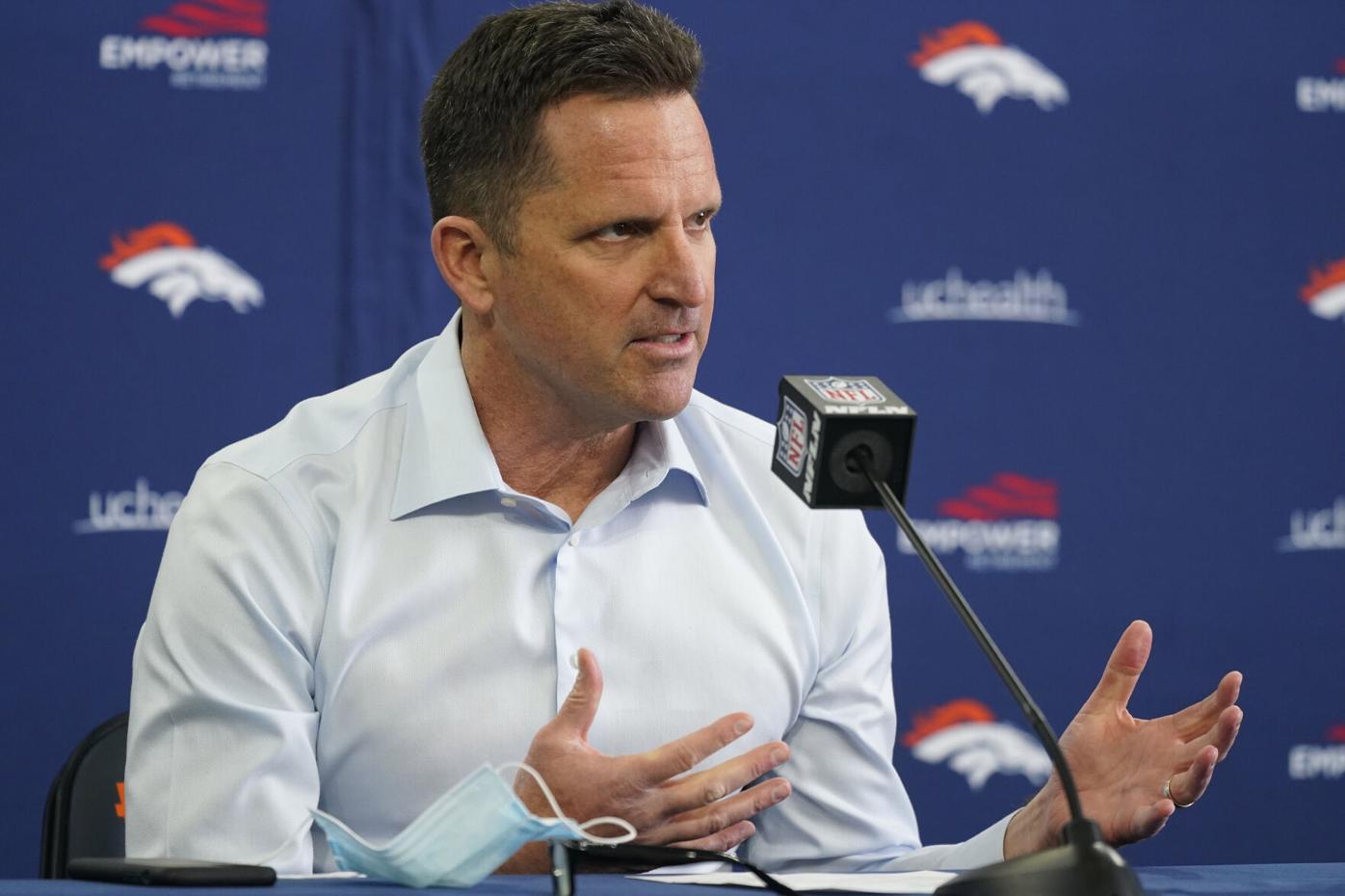 Broncos General Manager George Paton makes a point during a news conference to announce a four-year deal for $61 million to keep Justin Simmons on the team March 22 at the team’s headquarters in Englewood.

Nevada quarterback Carson Strong looks to throw a pass during the first half of the team's NCAA college football game against San Diego State on Saturday, Nov. 13, 2021, in Carson, Calif.

Broncos General Manager George Paton makes a point during a news conference to announce a four-year deal for $61 million to keep Justin Simmons on the team March 22 at the team’s headquarters in Englewood.

DENVER — It’s heartening to see George Paton on the scouting trail. While the Broncos bumble through another season on the field, the general manager is on the road tracking quarterbacks.

We’ll see. That’s the approach to the Paton era in this space: We’ll see. So far the new guy has left little doubt he can tell a good player from a bad player — at almost every position except the one that’s puzzled the Broncos for a half-dozen years now, quarterback. As Woody Paige wrote here the other day, Paton’s overseen 50 Broncos moves. Like Dr. Dre, Steven Spielberg, Phil Mickelson, Caitlyn Jenner, Steve Jobs, Tony Hawk, Nancy Lopez, Ralph Lauren and the Van Doren brothers, Paton’s a mover and a shaker who would call southern California his first home. And like Dre (“Beats”), Mickelson (hitting bombs), Jobs (your phone) and the Van Dorens (the Vans’ Steve Caballero shoe), the Paton era with the Broncos will be defined by one move.

(I would make the argument Ralph Lauren’s signature investment is the family’s spectacular ranch in the San Juans, but that could be the trout streams talking and a different column.)

That one move, of course, is at quarterback — same as it was before Paton and same as it will be after him. He’s making moves to find the right one. In the past two weeks Paton and a merry band of Broncos scouts have traveled to see quarterbacks at Ole Miss (Matt Corral), Liberty (Malik Willis), Pitt (Kenny Pickett) and North Carolina (Sam Howell). Here's hoping Paton adds Nevada's Carson Strong to the list.

Earlier this season I ran into Paton at a Buffs game at Folsom Field. I don't know who he was watching, but I promise it wasn't a quarterback.

It seems fair to predict George Paton definitely will add a quarterback or two next offseason.

Question is, do you trust him to find the right one? More than Bitcoin, the most valuable currency these days is credibility, and it’s also the currency in shortest supply. Ask a public health official or teachers union president about that. Or wait till 2024 and say thanks.

Paton's accrued some credibility coin when it comes to non-quarterbacks. In 10 months he’s had hits in the draft (Javonte Williams, Jonathan Cooper, Baron Browning), in-season trades (Kenny Young) and found four starters through his work in the offseason. They might be hits, anyway. The Broncos are 5-5 with blowout losses at home to the Raiders, Eagles, Ravens.

For accuracy's sake we’ll say they look like hits.

The Broncos were off last week. They won the bye week, signing wide receiver Tim Patrick to a three-year contract extension worth $34 million. His 51st move was Paton’s best move so far.

Re-signing Patrick was a late comeback by Paton, who channeled his inner John Elway with that one. He was losing the week before the Patrick deal, because Mac Jones once again looked like the real deal. The Patriots rookie quarterback sizzled in prime time, throwing for 281 yards, a touchdown and no picks. Shoot, Jones even made a tackle. Imagine a QB doing that.

Paton passed on Mac Jones in the draft. That was a mistake — for Paton, not Jones, whose 94.7 quarterback rating is the highest among NFL rookies. If Jones were a Broncos quarterback right now, fans here would be giddy with anticipation for the next 10 seasons.

To return to their previous state as contenders, the Broncos need a visionary. Is that Paton?

Depends on the quarterback, so we’ll see.

Woody Paige: George Paton is the best of NFL's new GMs, but he needs to prove himself next season

Of the seven new NFL general managers in 2021, the Broncos’ George Paton and the Panthers’ Scott Fitterer are experiencing the best seasons.