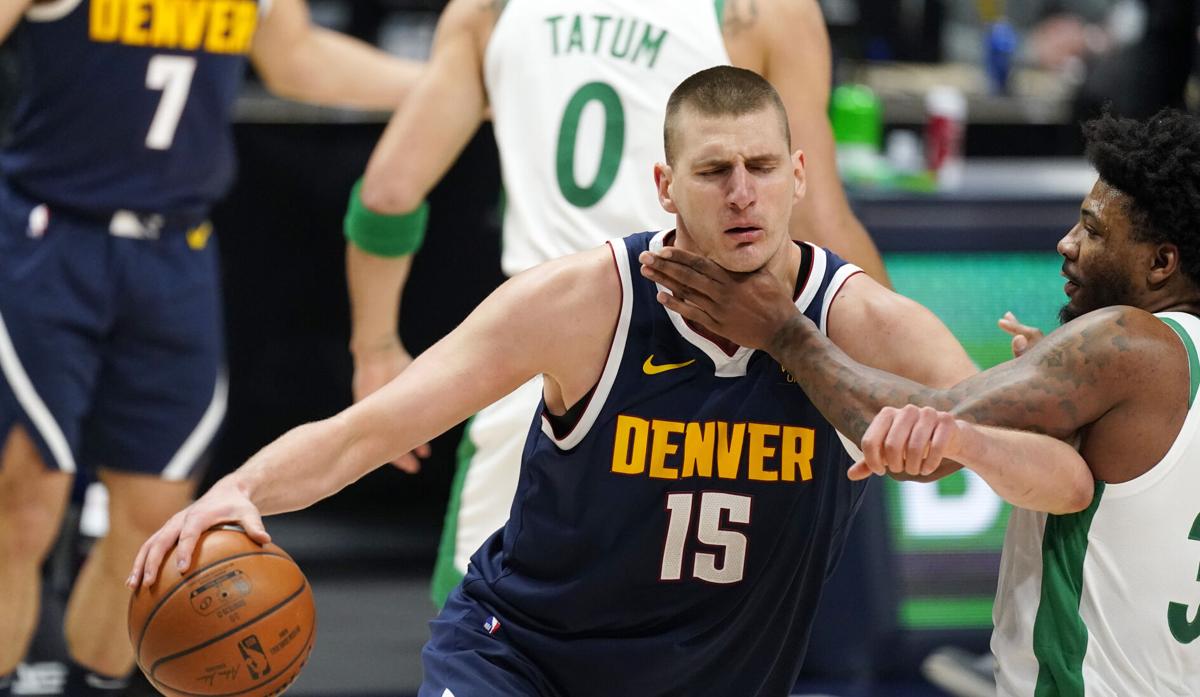 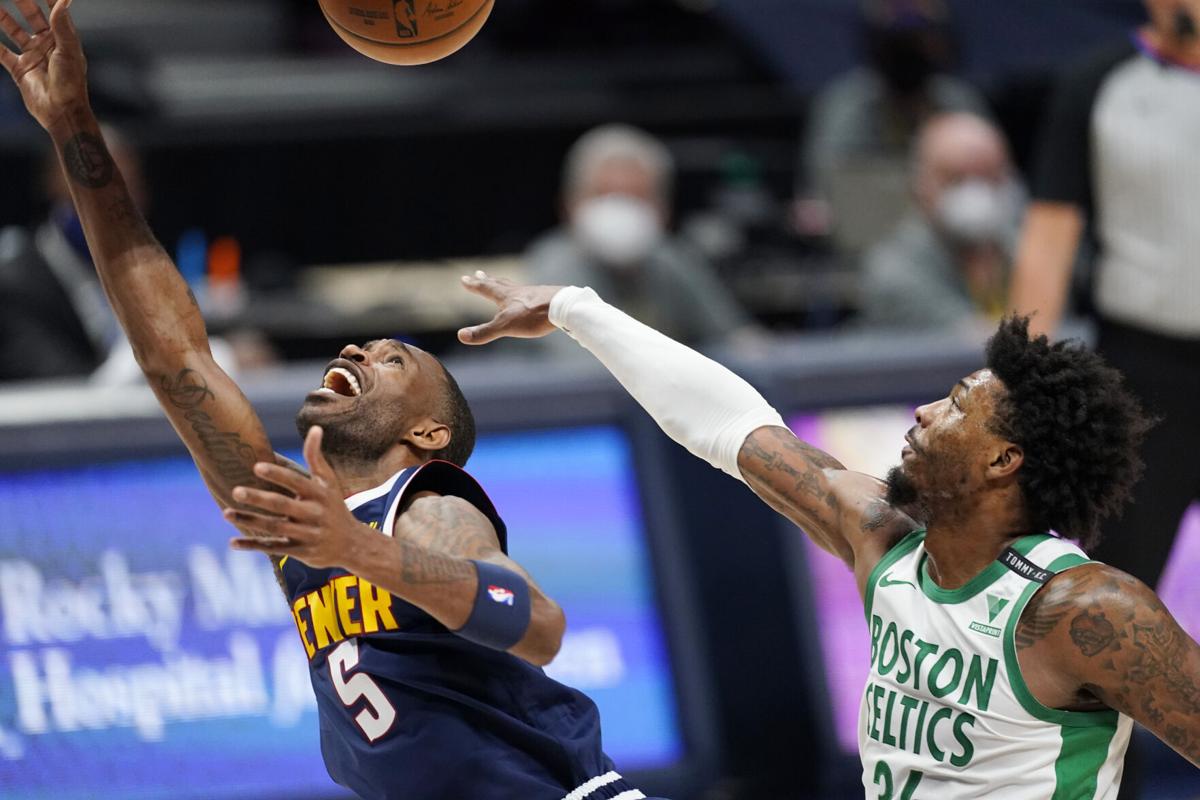 Denver Nuggets forward Will Barton, left, is fouled while driving to the rim by Boston Celtics guard Marcus Smart in the second half of an NBA basketball game Sunday, April 11, 2021, in Denver. (AP Photo/David Zalubowski)

Denver Nuggets forward Will Barton, left, is fouled while driving to the rim by Boston Celtics guard Marcus Smart in the second half of an NBA basketball game Sunday, April 11, 2021, in Denver. (AP Photo/David Zalubowski)

DENVER — Wild things are going on with the Nuggets. They’re talking NBA championship and no one’s laughing. Still, the home team would be silly to look all the way ahead to the playoffs.

Here’s what you don’t want to see: Nikola Jokic moping on the bench, by himself and far away from the huddle, after getting yet another shaky whistle. And the opposing team turning the smooth flow of Nuggets action ball into a gritty slog.

You know, like Sunday at Ball Arena. That right there, a 105-87 Celtics win, was worst-case scenario. Joker ticked off, thrown off his game. Jamal Murray out with an injury. Sticky offense.

“It’s unfortunate, because we haven’t played that way in a long time,” Michael Malone said after Denver lost for the first time in almost three weeks, snapping an eight-game win streak.

Just when the Nuggets were shaping into world-beaters, a crazy thing called basketball happened. Any given Sunday, right?

That’s the thing about good vibes in the NBA. The other team has the best of the best players in the world, too, and good vibes can turn sour quicker than I can spell “Facundo Campazzo.” The Celtics closed the game on a 40-8 run to throw a wet towel on the Nuggets’ heater.

“This was just one of those games you just put in the past and move on,” said Michael Porter Jr., who had 22 points on a rare off night that included 11 missed three-pointers.

Hold off the panic button for now, but now seems as good a time as any for an April reminder: No matter if the Nuggets climb into the 2 seed or tumble to the 7, the first-round playoff series is going to be no joke. The Celtics are 29-26 and would be right around the cut line in the West. They threw the book at the Nuggets, and by the book I mean the formula to slow down Denver: Beat up Jokic. Crack him. Smack him. Frustrate Joker, and the Nuggets can be had. The betting favorite to win the MVP award, Jokic had 17 points, 10 rebounds and 11 assists, but he was nowhere to be seen when the Celtics put the smack down in the final quarter of a feisty game. The Celtics got under the Nuggets’ skin and celebrated as if they’d just won a playoff series. The Nuggets moped.

“I was not so much frustrated,” Jokic said after. “It was just a normal day for me.”

One game’s no big deal. But it’s a guarantee the Mavericks, Blazers, Grizzlies and Spurs will see the tape that showed Joker earning a technical foul for arguing a foul call — and rendered a non-factor thereafter. One of those teams will probably draw the assignment as Denver’s first-round opponent come playoff time.

“He (Jokic) gets frustrated with the referees and what he perceives as the lack of calls,” Malone said. “But that can never take away from your duty as a basketball player.”

This was Denver’s first loss since a trade for forward Aaron Gordon catapulted them from fun story to actual contender. What was eye-opening about the eight-game winning streak is that the Nuggets haven’t been a terrific regular-season team. But they’ve been a terrific playoff team, winning three series over two years, and recent history suggests Sunday was a blip.

Still ... this one showed just how much the Nuggets rely on Jokic. They entered the game with a franchise-record streak of 18 straight games with 25 or more assists. They had 23 assists (and a 79-65 lead) with 2:17 left in the third quarter and never scored another assist. Stopped moving. Stopped passing. Stopping holding a lead. All with the Joker fuming from a seat on the bench.

“I didn’t anticipate a second-half collapse like we (had) today,” Malone said.

Come to think of it, one of his worst games added to his Joker’s case for the MVP award. When he’s not a factor in the fourth quarter, the Nuggets are quite vulnerable. That makes the first-round series that much more important. Jokic hasn’t missed a game this season, and wouldn’t it be nice to slide through the first round in short order to get the big man some rest?

“The West is really, really tough,” as Jokic said.

DENVER - It took two weeks and eight games, but the Nuggets lost with Aaron Gordon on the court.