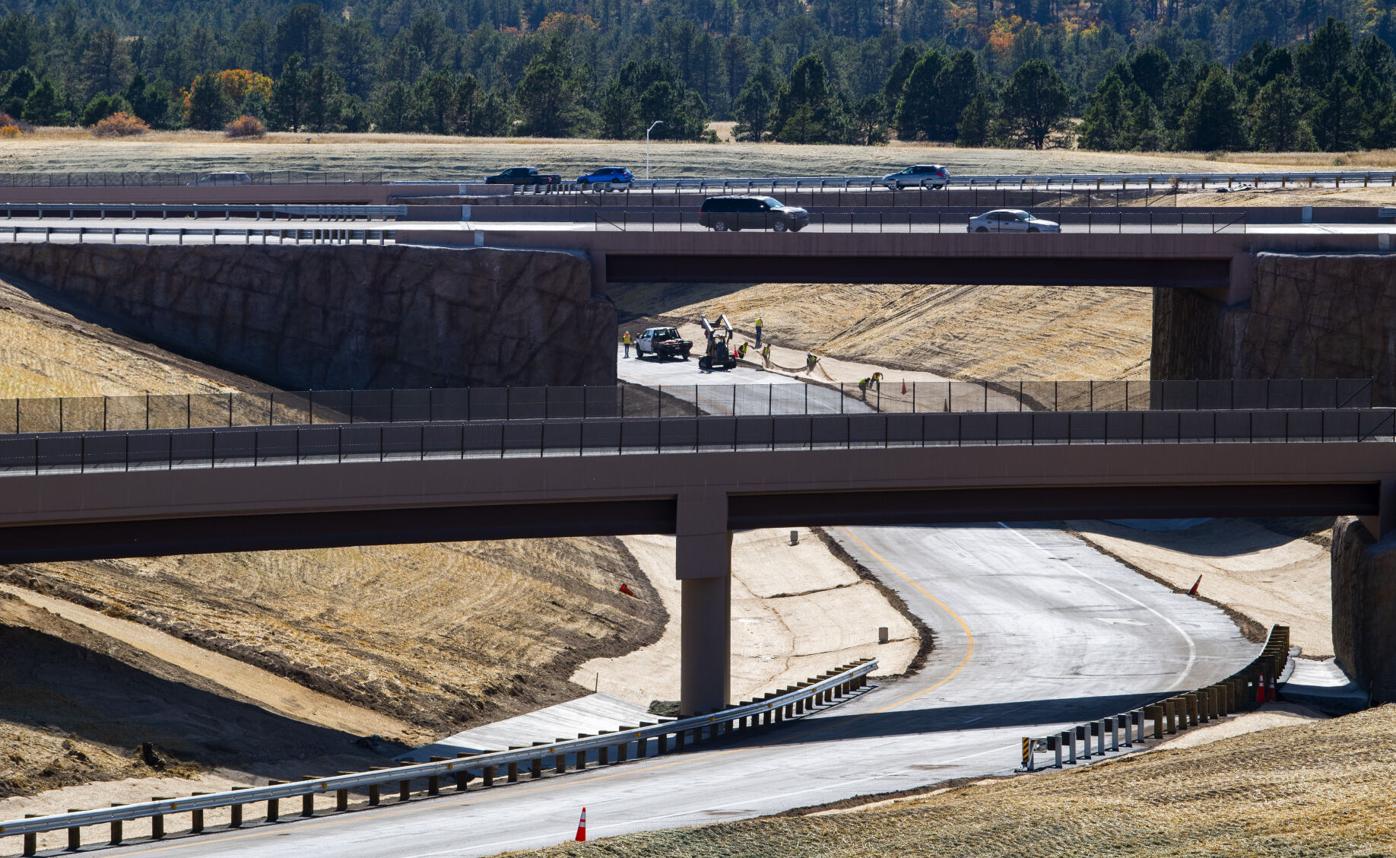 Crews finish the landscaping along the southbound on ramp to Interstate 25 from the new Voyager Parkway interchange Oct. 7

as I-25 traffic drives over head. The new interchange is scheduled to open later this month. 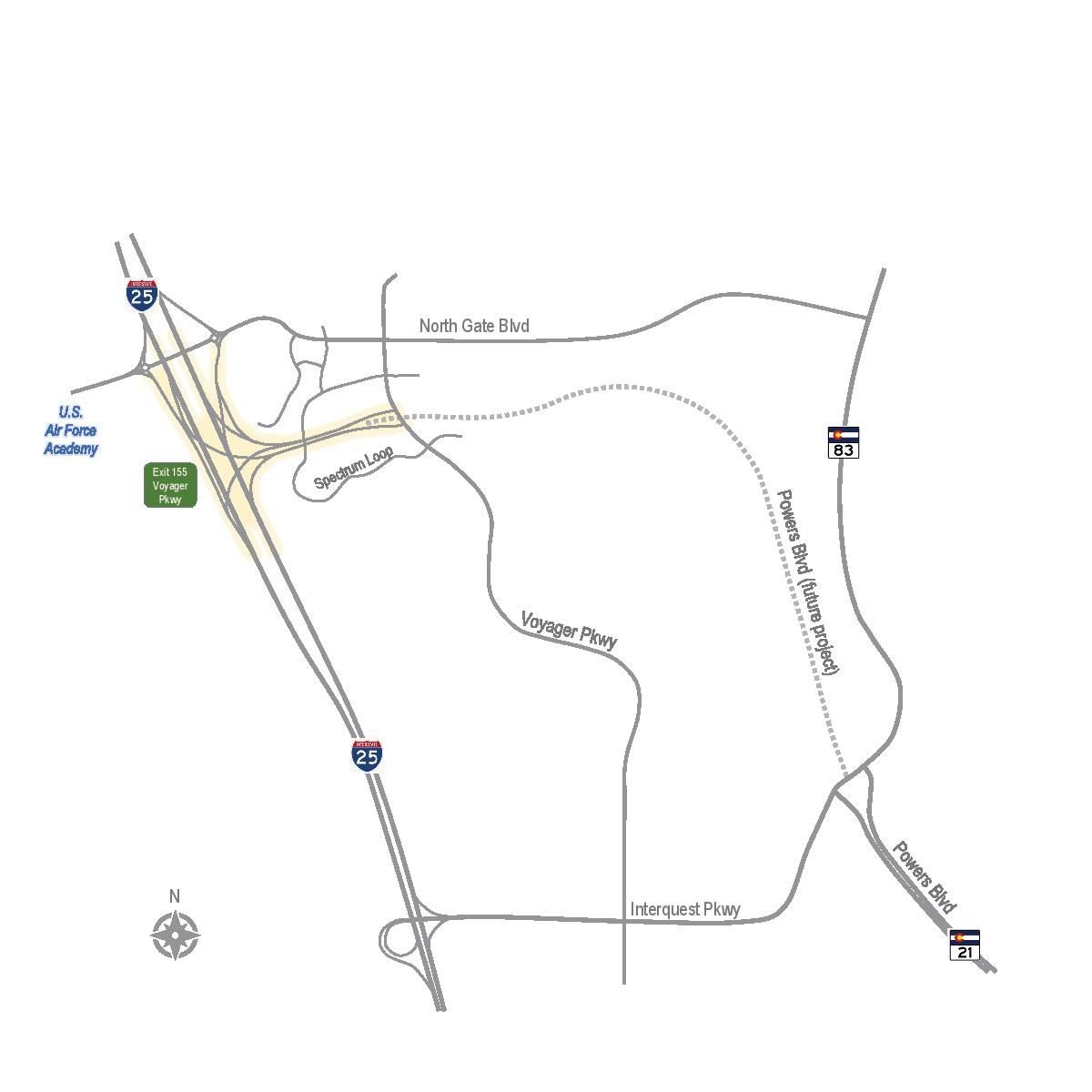 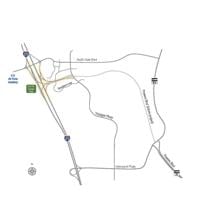 A map of the Powers Boulevard Extension from Voyager Parkway to InterQuest Parkway. 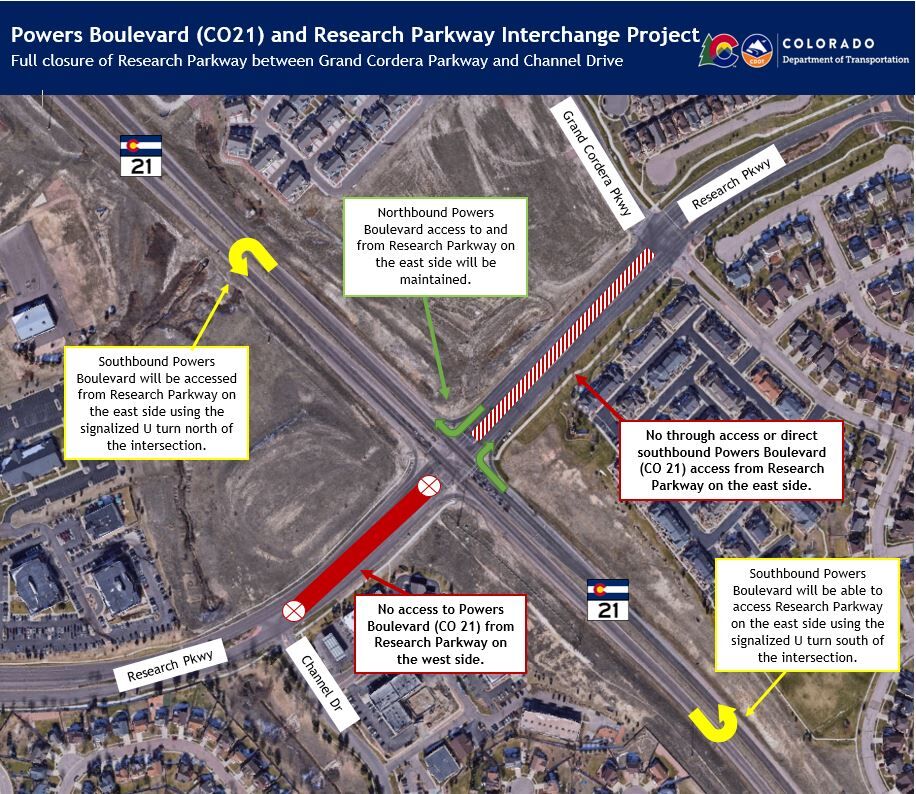 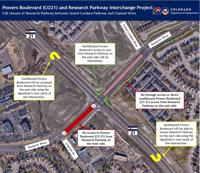 Beginning in early November crews will fully close a portion of Research Parkway from the west side of Powers Boulevard to Channel Drive and will restrict access on Research east of Powers to construct the new interchange. The closure will last two months.

Crews finish the landscaping along the southbound on ramp to Interstate 25 from the new Voyager Parkway interchange Oct. 7

as I-25 traffic drives over head. The new interchange is scheduled to open later this month.

A map of the Powers Boulevard Extension from Voyager Parkway to InterQuest Parkway.

State and Pikes Peak region officials celebrated Thursday the completion of the first phase of a long-awaited two-part project that will one day directly connect Interstate 25 to Powers Boulevard on Colorado Springs’ far north side.

After 20 months, construction has wrapped on one of the largest interchanges in the region — a $63 million project that included construction of a four-lane divided highway between I-25 and Voyager Parkway, south of North Gate Boulevard.

Portion of Airport Road to close through spring for bridge replacement

The new full-access interchange, which also includes six new bridges and drainage upgrades, provides direct access to the Polaris Pointe retail complex at the city’s far north end. Polaris Pointe includes dozens of businesses, including Bass Pro Shops and Magnum Shooting Center. Before the interchange was complete, drivers coming from I-25 had to travel on a heavily trafficked stretch of North Gate Boulevard.

Motorists can drive the new interchange when it fully opens in about 10 days, developer Gary Erickson said.

The project finished on time and about $2 million under budget, a feat Erickson called “a miracle,” as much of the work was completed during the pandemic, which caused skyrocketing construction materials costs, as well as materials shortages and shipping delays, he said. The project is privately financed, with bonds to be repaid by revenues from Polaris Pointe.

The new interchange will help create an essential loop of major roadways around the city, reducing pressure on crossroad and city traffic and allowing for future growth, officials said.

“We have to recognize the significance this project has for our military installations, our airport, the economic development impact it will have and future traffic mitigation on adjacent roads,” Colorado Springs Public Works Director Travis Easton said.

City, county and state officials have for decades dreamt of connecting Powers Boulevard to I-25, making the completion of this first phase all the more special, they said.

The project, Rothschild said, was envisioned before he began working for El Paso County’s transportation department in 1975, but various roadblocks prevented it from moving forward.

“We’re really happy … that you resurrected the project and made it happen,” he said.

Erickson said Thursday he hopes his vision for a full circular link can be realized in the next three years. Another project, which will extend Powers Boulevard from Colorado 83, where it now ends, to Voyager Parkway, still has not broken ground.

Funding hasn’t been secured for the final link. Currently, the only funding identified for this portion of the project will come from the sale of future bonds, which is dependent on future development in Polaris Pointe, Erickson said.

It was still unclear whether money from President Joe Biden’s $2 trillion infrastructure spending plan unveiled this spring — which includes $621 billion to fund road, bridge, railway and other infrastructure improvements — could help pay for the project, but Erickson said he would explore different grant funding options to do it.

Powers Boulevard is also getting a face lift on the city's east side, where construction crews continue reconstructing the highway at Research Parkway to make left turns easier for drivers and crossing the road safer for pedestrians while removing a stoplight on Powers that has snarled traffic.

The intersection will become a "diverging diamond interchange" like the one at Fillmore Street and I-25, with vehicles on Research Parkway crossing to the opposite side at a traffic light so left-turning drivers don't have to cross oncoming traffic to reach Powers. Powers Boulevard will run above Research with no stoplight.

Crews are also adding sidewalks and bike lanes on Research, improving access to local schools and access via other modes of transportation.

Beginning in early November, crews will fully close a portion of Research Parkway from the west side of Powers Boulevard to Channel Drive and will restrict access on Research east of Powers to construct the new interchange, Colorado Department of Transportation officials announced Thursday. The closure will last two months and drivers should expect delays, they said.

Westbound traffic on Research Parkway and traffic moving to Powers Boulevard from the east will turn right on Grand Cordera Parkway then continue north to Briargate Parkway and turn left. Motorists can continue west to access Powers, or continue to Austin Bluffs Parkway, turn left and continue south to access Research.

Access to area businesses and schools will remain open during the closure, transportation officials said.

The closure is intended to speed up initial work needed to raise Powers over Research as well as underground drainage work on Research, ultimately reducing the construction timeline and project costs, officials said.

More than $25 million in federal stimulus funding will pay for more than half of the estimated $43.6 million project. The remaining funds will come from the state transportation department’s budget, a spokeswoman previously told The Gazette.

The work is expected to be complete by fall 2022.

When it is eventually completed, the new link joining Interstate 25 and Powers Boulevard on Colorado Springs’ far north side will create an es…