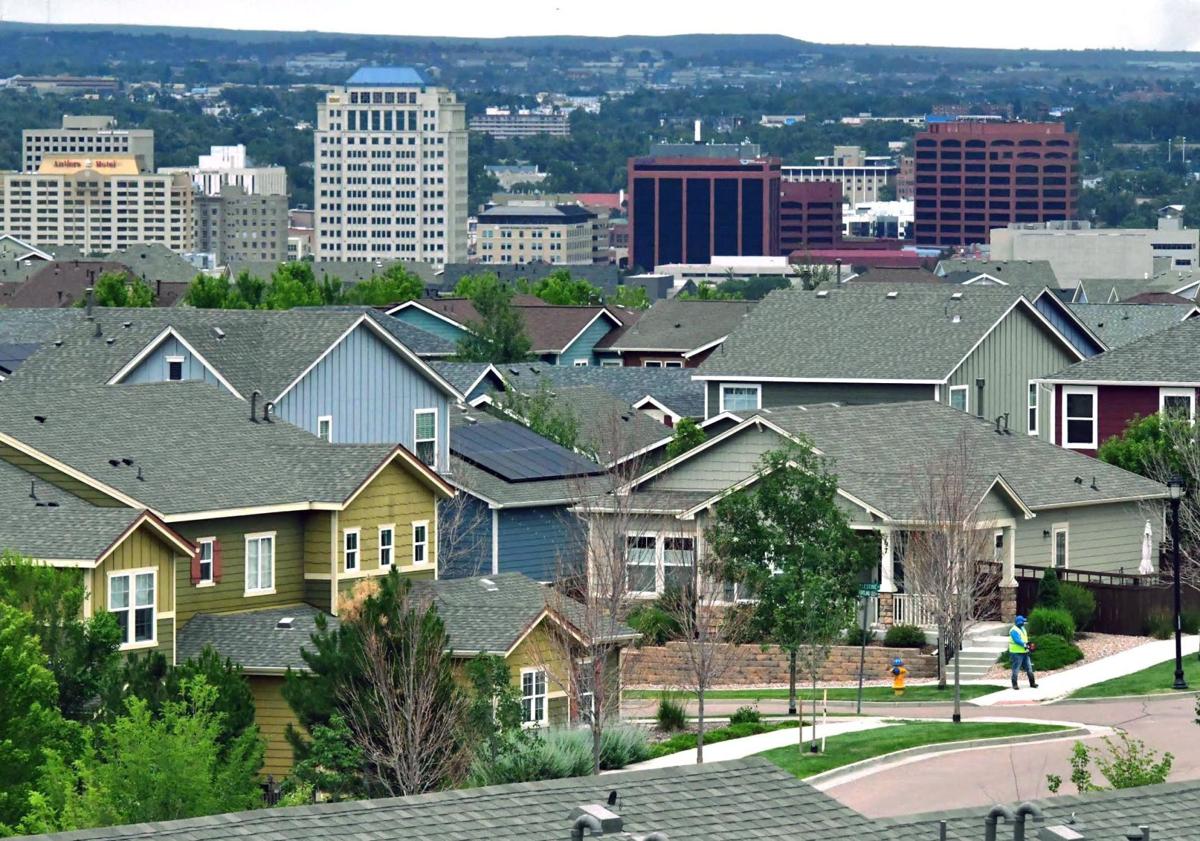 Gold Hill Mesa homes and the skyline of Colorado Springs on

. A recently completed analysis of a section slated for expansion of the Gold Hill Neighborhood found a low risk of settlement or destabilization during an earthquake. 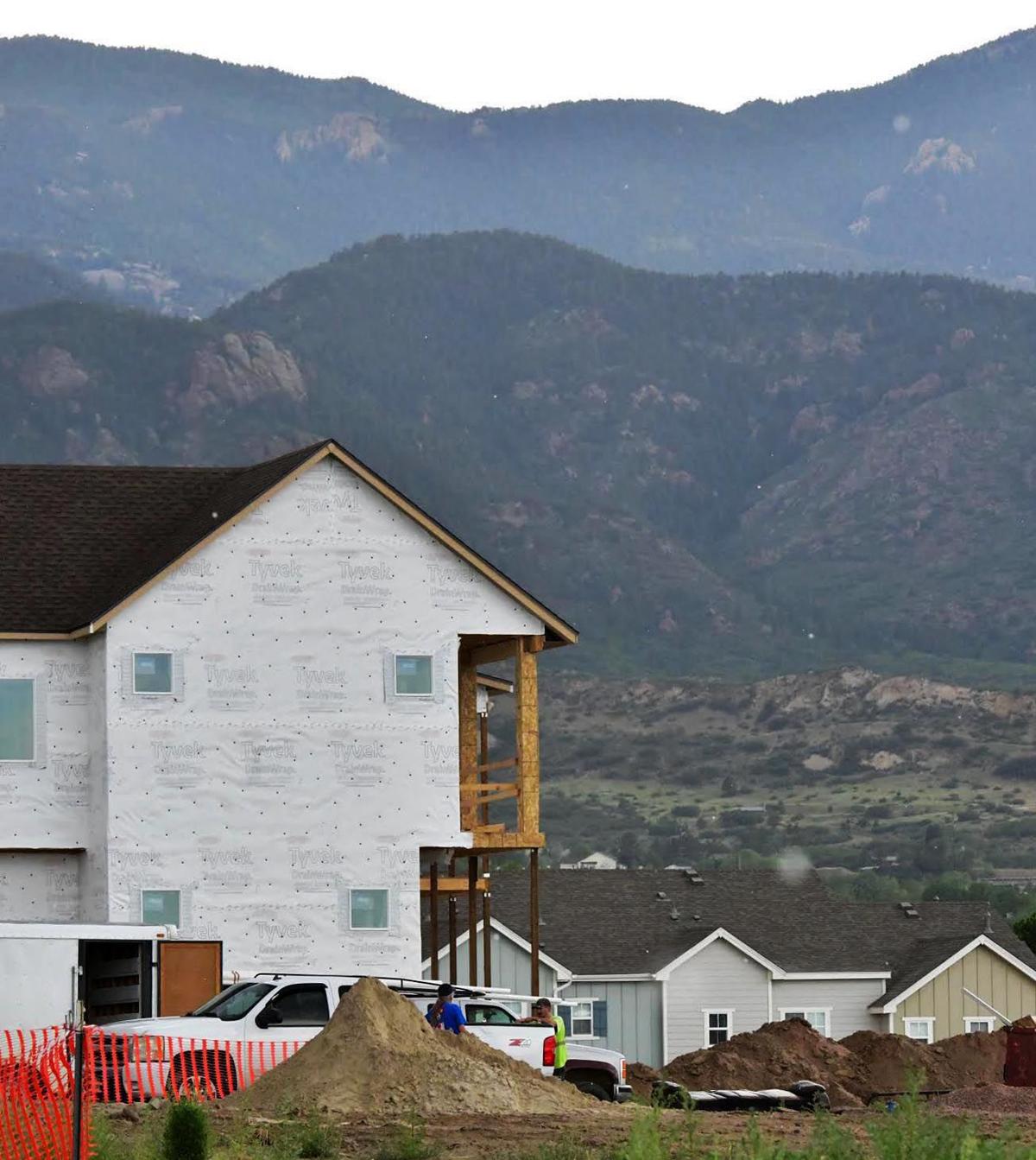 One home is partially underway in the Goldhill Mesa area. The city of Colorado Springs has submitted a new analysis of the ground slated for a Gold Hill Mesa expansion to the Colorado Geological Survey. The state agency raised serious questions about the project last year. (Photo by Jerilee Bennett, The Gazette)

Gold Hill Mesa homes and the skyline of Colorado Springs on

. A recently completed analysis of a section slated for expansion of the Gold Hill Neighborhood found a low risk of settlement or destabilization during an earthquake.

One home is partially underway in the Goldhill Mesa area. The city of Colorado Springs has submitted a new analysis of the ground slated for a Gold Hill Mesa expansion to the Colorado Geological Survey. The state agency raised serious questions about the project last year. (Photo by Jerilee Bennett, The Gazette)

The developer of Gold Hill Mesa, a neighborhood on Colorado Springs’ west side, expects a new ground analysis will allow builders to put up 32 additional homes in the subdivision after the Colorado Geological Survey raised  questions last year about the stability of soils within the development.

The recently completed study found low potential for the soils beneath homes to settle more than what’s typically expected after new construction, according to engineers with CTL Thompson, an engineering firm hired by the developer, Gold Hill Neighborhood LLC.

City staff has submitted the latest Gold Hill Mesa analysis to the state geological agency for review and expects a response in two to three weeks, city spokeswoman Jamie Fabos said. City personnel, including stormwater engineers, will also review the submissions, she said.

The Geological Survey said in an Oct. 19 report last year that it couldn’t recommend approval of the proposed expansion without more information about the land, citing concerns about slope stability, settlement and liquefaction potential of the soils atop a century-old mine tailings pile beneath the development.

The questions were raised about two proposed housing tracts in the development, known as Filings 10 and 11. Gold Hill Mesa currently numbers about 550 homes.

The new study by the development also found low risk that an earthquake would cause the ground under the new homes to destabilize and harm other areas of the subdivision in part because the faults in the area rarely move, engineers said, even when measured by geologic time.

To mitigate risk on the site, the developers also excavated most of the area near 21st Street and Gold Hill Mesa Drive, Filing 11, and replaced dirt from unknown sources and expansive soils with new fill dirt, said Mitchell, in an email.

“Excavation and fill placement mitigates the potential for heave associated with expansive materials and replaced undocumented fills that could otherwise result in excessive settlement,” he said in an email.

The excavation was planned prior to the questions raised by the Colorado Geological Survey as part of the standard lot preparation process, said Stephanie Edwards, executive vice president of Gold Hill Neighborhood.

The engineers started monitoring the newly placed fill dirt in April and have not noticed any significant settlement since, Mitchell said. Consolidation of the soil is most likely right after weight is added on top of it, CTL Thompson engineers said.

Homebuilders are also advised to do their own geotechnical analysis of home sites and excavate 10 feet below the lowest level of the homes and put in new fill dirt, CTL Thompson senior principal engineer Bill Hoffmann said.

While the developers are confident in their recent analysis, the company cannot predict whether the Colorado Geological Survey will be satisfied, Edwards said.

“The demands that have been requested weren’t things that made a lot of sense to begin with,” said Hayden Fischer, chief technical officer with Bryant Consultants, who provided a peer review of CTL Thompson’s report for Gold Hill Neighborhood.

For example, the Colorado Geological Survey called for a study of the entire subdivision’s risk of destabilization during an earthquake, also known as liquefaction because the soil acts like a liquid. CLT Thompson engineers did not do a liquefaction study of the whole subdivision because one was done in 2004 and accepted by the city, Hoffmann said.

“CGS revisited the question on something that had already been approved,” he said.

Most filings at Gold Hill Mesa won approval from city staff without input from state geologists on each individual phase. The state agency reviewed a broad proposal in 2004, which served as a basis for the approval of subsequent phases.

The Colorado Geological Survey evaluated Filings 10 and 11 at Gold Hill Mesa because of an ordinance, passed unanimously by the Colorado Springs City Council in 2017, that requires the agency review site plans and make recommendations in advance of development across the city.

The decision of whether to approve construction at both plots ultimately rests with city planners and engineers.

The Geological Survey raised concerns about settlement after it found portions of Gold Hill Mesa sank more than 3 inches over a six-year period using satellite images. Edwards contends significant sinking — also called subsidence — has not happened and the state agency never confirmed it’s claims with studies on the ground.

The agency was also concerned about the moist mill tailings left behind on the site because they have the potential to sink at uneven rates, which can cause structural damage to homes, the agency said in an April 2019 letter.

The Golden Cycle Mill produced millions of tons of tailings from the 1890s to the 1940s while refining more than 483,000 pounds of gold from the Cripple Creek and Victor strikes.

The site sat vacant for decades after the mill closed, amid concerns that the chemicals from the refining process, including arsenic, cyanide and lead, could still reside in the soils. But with sweeping views of Pikes Peak and downtown Colorado Springs, the site drew the eye of developers, who bought the property in 1998 and entered into an agreement with the city to recap the mill tailings, which paved the way for the construction of hundreds of homes.

The Colorado Geological Survey, recognizing that the site is largely developed, still called for more study to assure that any additional homes would not be exposed to “largely unknown risks” from the subsidence of the ground, a letter from the agency stated last Aug. 22. .

Fabos said the City Attorney’s Office will not be involved in the current review, describing the review process as administrative and also not involving Colorado Springs City Council. She could not say how long the internal city reviews might take.

The Colorado Geological Survey declined to comment on the development's latest analysis.

Third-party experts who reviewed the report at the request of The Gazette had differing opinions on the risk of ground subsidence.

Excavating and placing new fill dirt on top the existing mill tailings and other soft soils, likely will not mitigate the potential for the ground to sink slowly as the CGS has shown is already happening, said William Hoyt, a certified professional geologist and recently retired professor of geology and oceanography at the University of Northern Colorado.

The subsidence from the soft subsurface soils is likely to be a much slower phenomenon than the engineers could observe in a few months, he said. If the soils settle unevenly it could be a significant problem for homeowners expecting to live in their homes for decades because it could cause structural damage.

A professor with the University of Colorado Boulder disagreed.

The soft soils, such as sand and silt, in Filing 11 should compact fairly quickly under the new fill dirt, likely before new homes are built, as CTL Thompson engineers predict, said Dobroslav Znidarcic, a professor emeritus of geotechnical engineering who has worked with mine tailings.

“Whatever settlement is going to be generated by the applied fill will be over in a period of six months or a year,” he said.

The soft mill tailings are likely to sink a few inches under the new fill as the water is pressed out of them, he said. The rate of compaction depends on the type of soil. Water will leave sand and silt much faster than clay, he said.

The new fill is more likely to cause compaction of the soft soils than new homes because it is heavier, he said.

“The buildings themselves do not impose any significant load on the material,” he said.

Gold Hill Neighborhood already has interest from builders who want to purchase lots in Filing 10 and Filing 11, Edwards said.

The most recent analysis  "more than corroborated and supported we should be building houses there," said Mark Long, owner of Vanguard Homes and a resident of the neighborhood.

The excavation and filling the developer is doing also saves homebuilders time. Long considers the lots at Gold Hill Mesa above average compared to others in the city, he said.

Vanguard provides a 10-year warranty on homes built in Gold Hill Mesa, which is fairly standard he said. The state requires builders provide an eight-year warranty, he said.

"If something is wrong or is going to go wrong, it is going to do it sooner rather than later," he said.

The Colorado Geological Survey is withholding its recommendation for approval of a second development phase at Gold Hill Mesa, where 55 single…