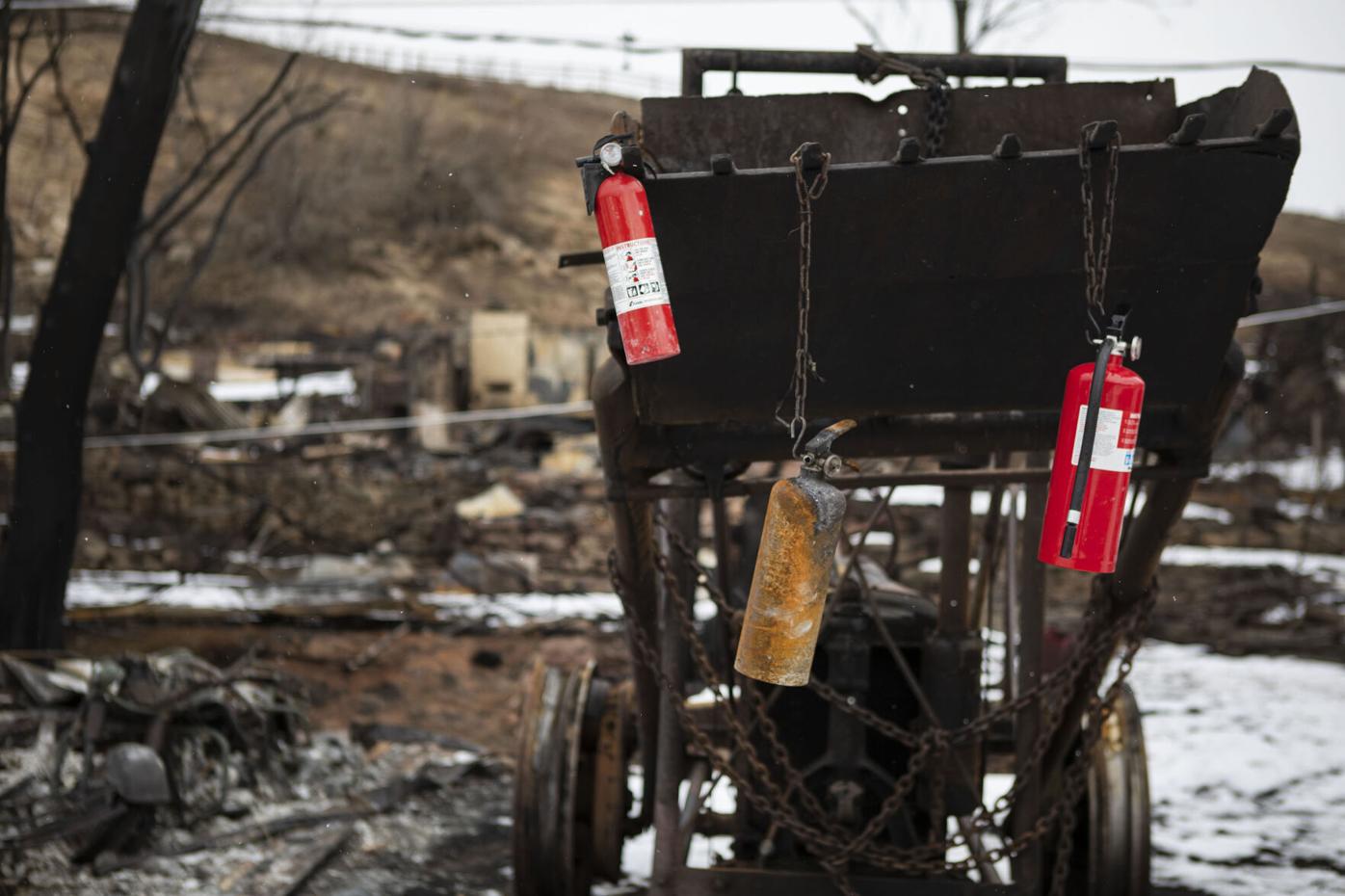 Empty fire extinguishers used by resident Bob Gabriella during the onset of the Marshall Fire hang from a vintage tractor where many of his family’s homes and buildings burned on Marshall Road on Wednesday, Jan. 5, 2022, in unincorporated Boulder County, Colo. (Timothy Hurst/The Gazette) 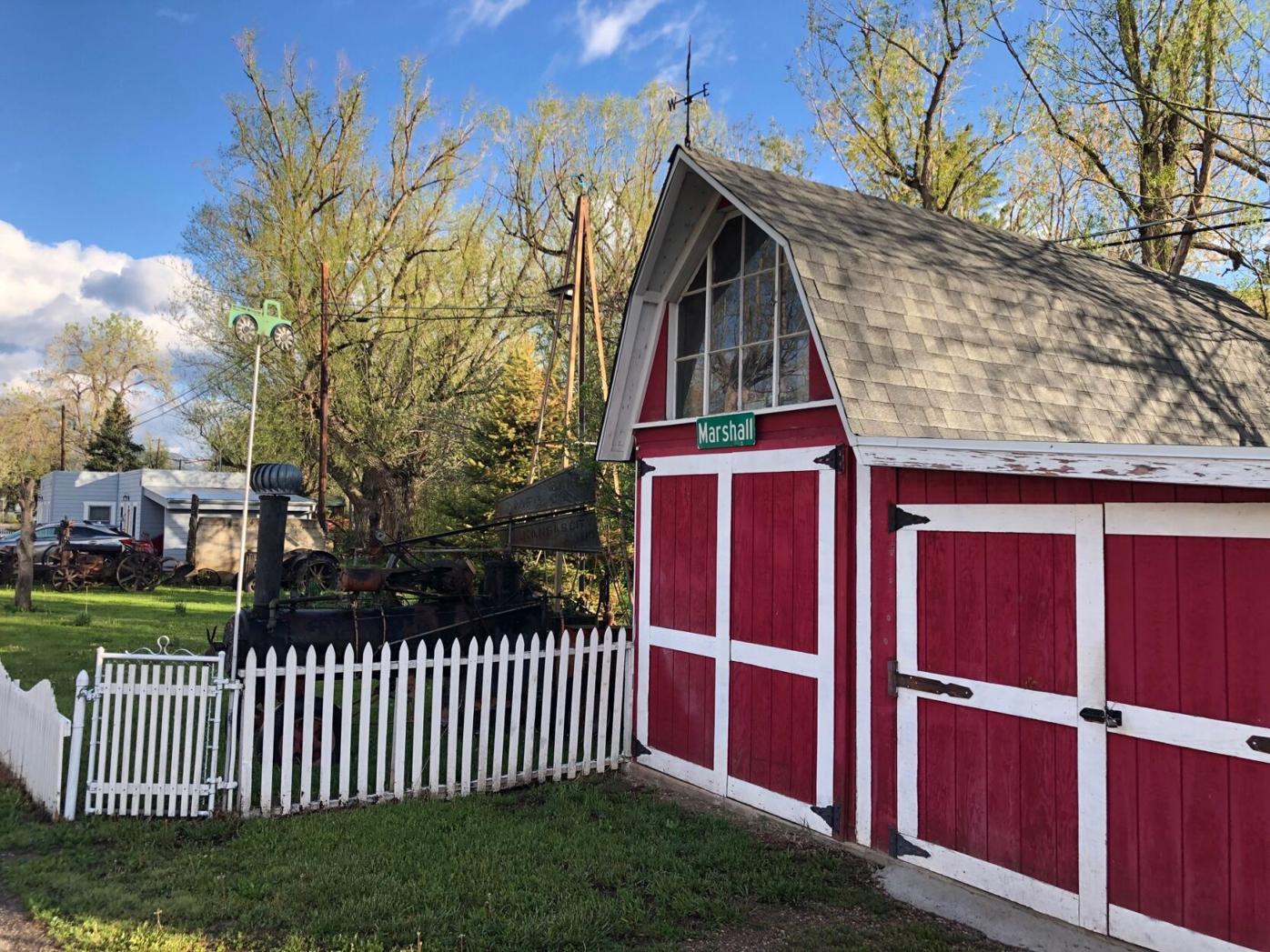 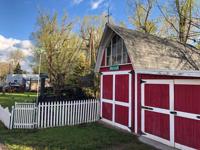 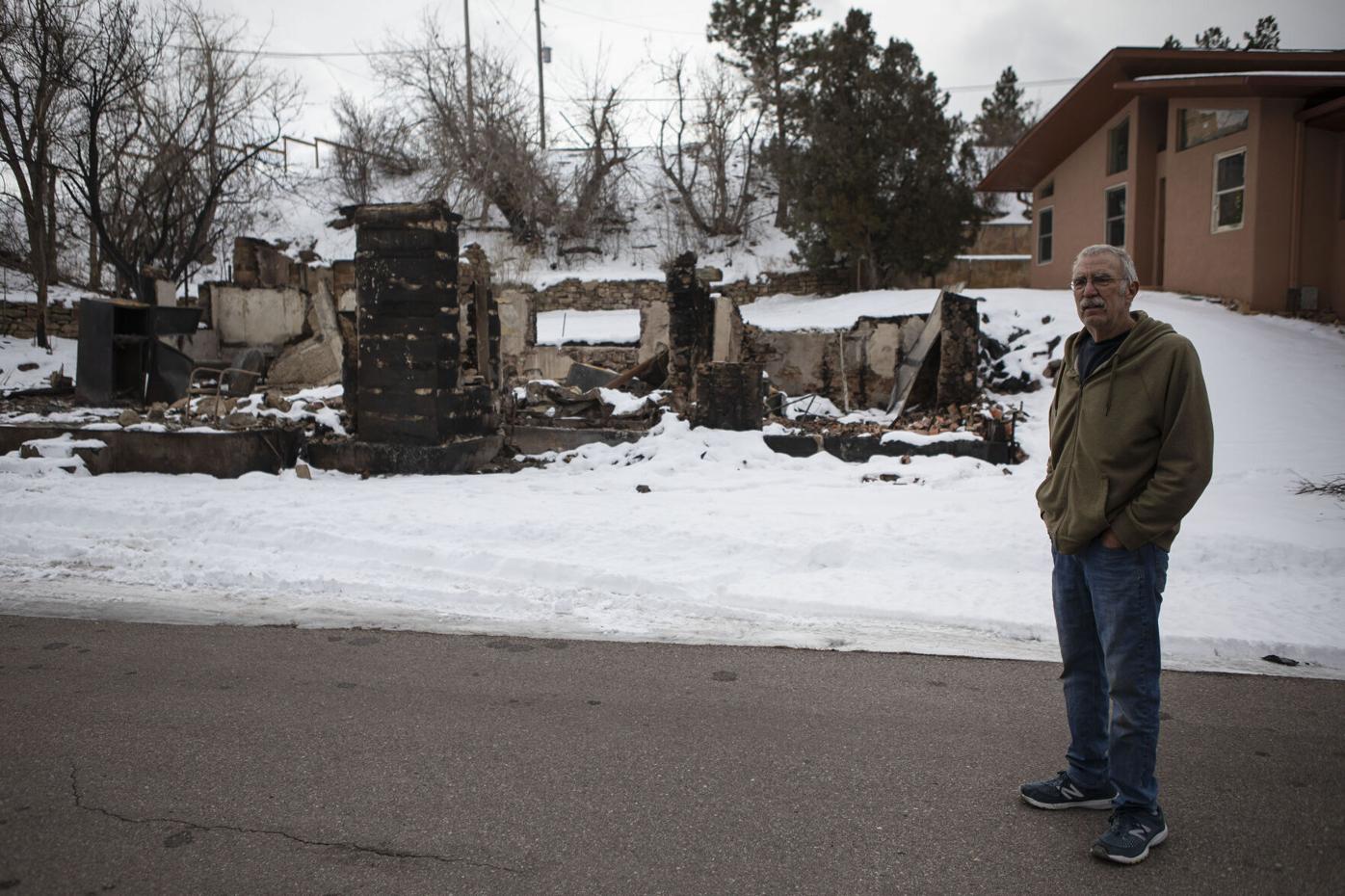 Resident Bob Gabriella, whose family has lived on Marshall Road in what is now unincorporated Boulder County for generations, stands in front of the burned remains of one of his family’s building originally built in 1865, while surveying damage on Marshall Road on Wednesday, Jan. 5, 2022, in unincorporated Boulder County, Colo. (Timothy Hurst/The Gazette) 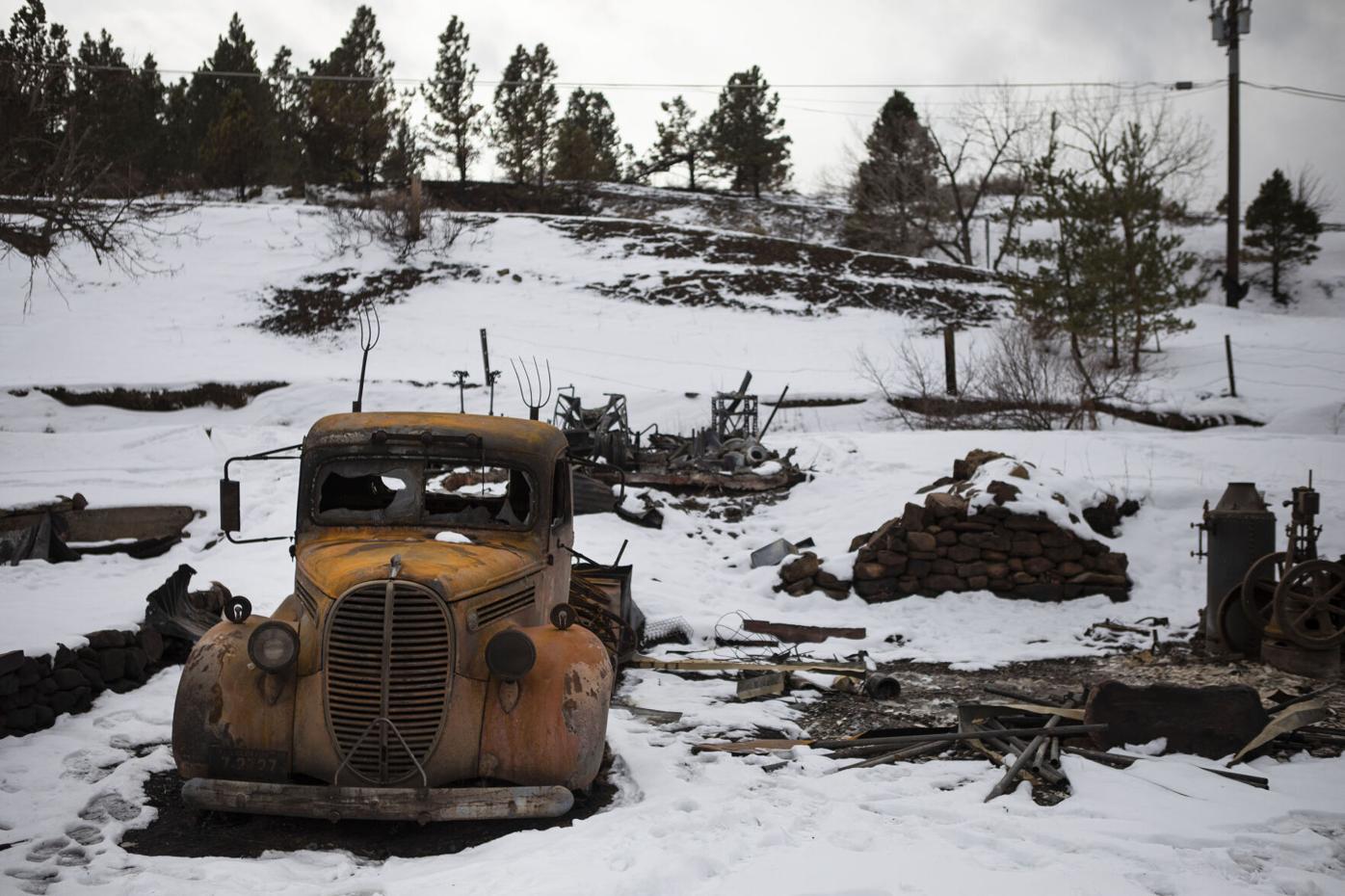 A vintage truck sits on resident Bob Gabriella’s property in the aftermath of the Marshall Fire on Wednesday, Jan. 5, 2022, in unincorporated Boulder County. 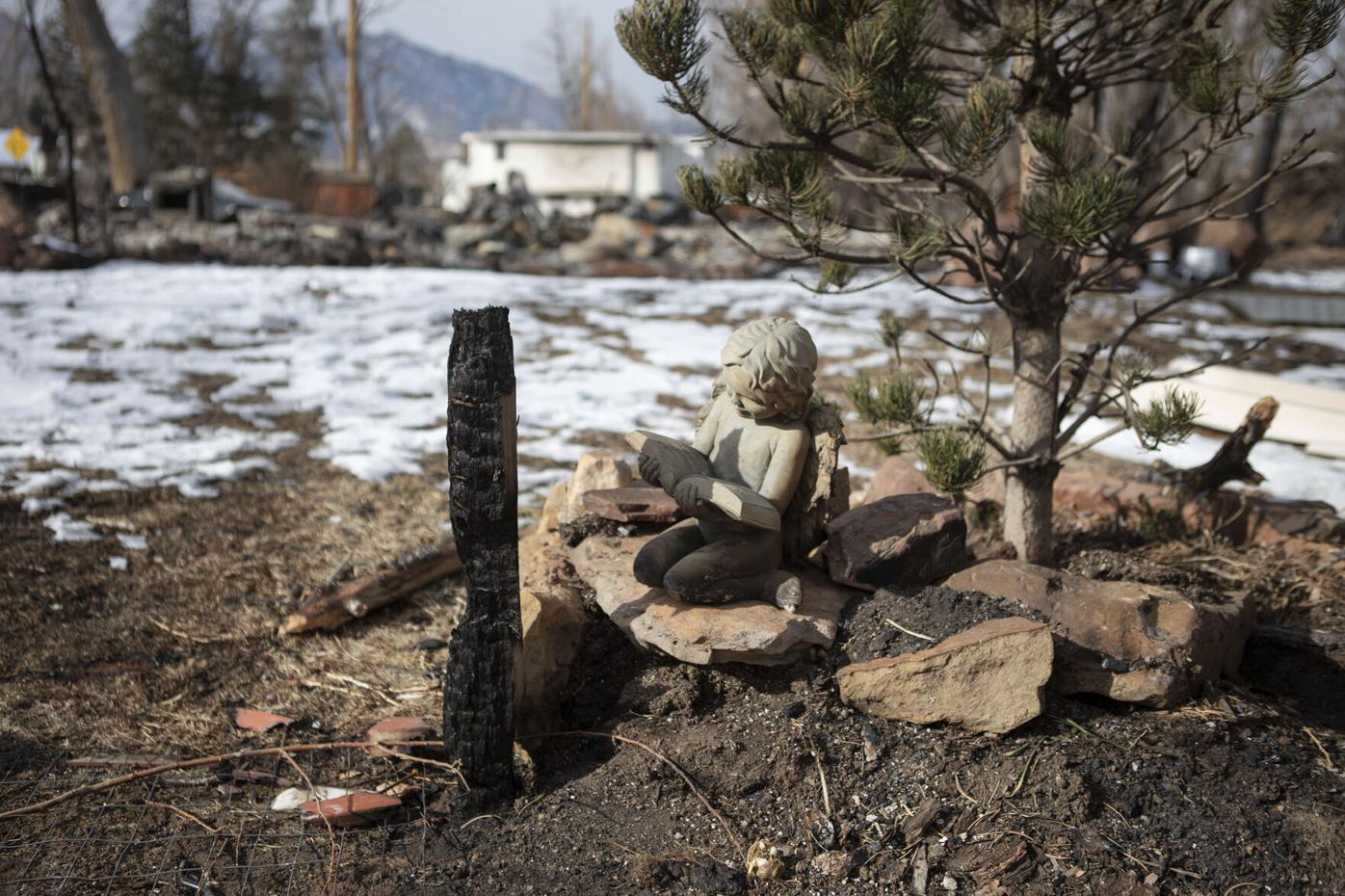 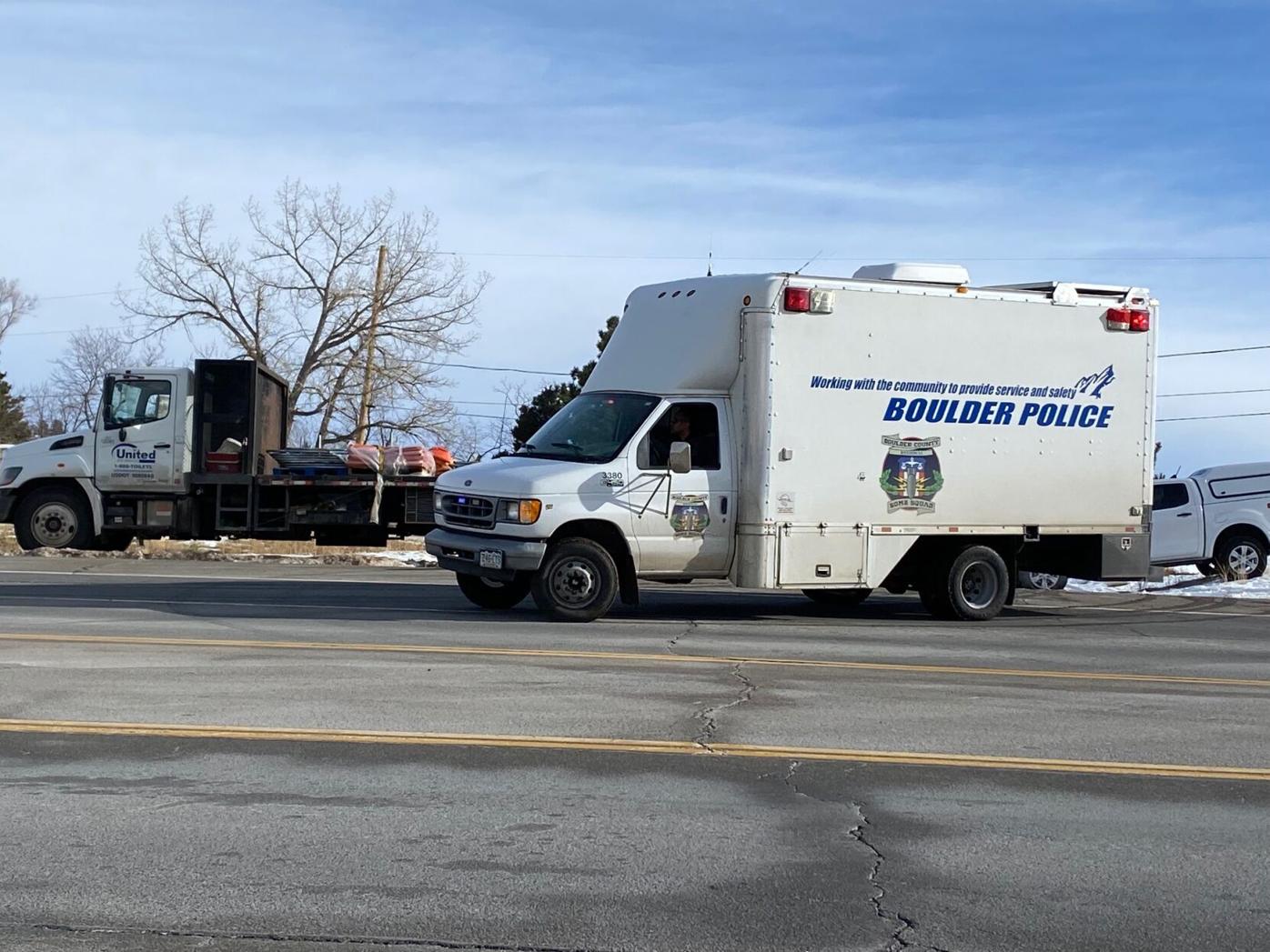 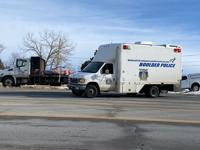 Empty fire extinguishers used by resident Bob Gabriella during the onset of the Marshall Fire hang from a vintage tractor where many of his family’s homes and buildings burned on Marshall Road on Wednesday, Jan. 5, 2022, in unincorporated Boulder County, Colo. (Timothy Hurst/The Gazette)

Resident Bob Gabriella, whose family has lived on Marshall Road in what is now unincorporated Boulder County for generations, stands in front of the burned remains of one of his family’s building originally built in 1865, while surveying damage on Marshall Road on Wednesday, Jan. 5, 2022, in unincorporated Boulder County, Colo. (Timothy Hurst/The Gazette)

A vintage truck sits on resident Bob Gabriella’s property in the aftermath of the Marshall Fire on Wednesday, Jan. 5, 2022, in unincorporated Boulder County.

Neighbors at ground zero of Colorado’s most devastating wildfire traded stories of urgency, confusion, helplessness and anger as Old Marshall Road opened to the public for the first time Wednesday.

Bob Gabriella, whose family was the first to build on the historic rural street in 1865, said he saw a wisp of smoke coming from the Twelve Tribes property on Dec. 30 at around 9 a.m. “The wind was blowing pretty hard. I was scared. I told my wife to get the suitcases,” he told The Gazette as he surveyed the grey, ashy outline of what used to be two vintage motorcycles. “That one is a 1936 Harley my dad used to ride,” he said.

He didn't have time to save the vintage cycles as the barn everyone on the block compares to a museum went up in a hideous ball of flame. Three fire extinguishers hung from a bucket on a charred tractor in the yard: two of them are red and one is burned up. “I used them all up trying to save this barn. I sometimes hang stuff there for people to see,” he said. On Sundays, neighbors say, scores of weekend bicycle riders use the eclectic road as a byway for their weekend journeys because they loved to look at the old buildings. A white concrete structure that used to be a brothel for miners was luckier than the barn.

A survey of neighbors scoping out the damage on their block gave the same approximate time for the moment they noticed the fire on Dec. 30. Some smelled smoke before they saw it, at around 9 a.m.

A woman named Brie, who asked not to give out her last name, told The Gazette that her sister was driving by the compound at Highway 93 and Marshall Road at around 9 a.m. and texted that it looked like there was a bonfire on the Twelve Tribes property. “She couldn’t believe it because it was a red flag day,” said Brie.

An hour or so later, people at the Sans Souci Trailer Park across Highway 93 saw billowing smoke coming from the Twelve Tribes’ land. Ryan Davis, who says he keeps an eye on the area as a rule, decided to walk his dog toward the fire sometime in the middle of the morning. He said that a shed at the back of the five-acre compound was burning from the outside and that at that time the roof was intact. “Something made the shed catch fire and it was burning but no one seemed to notice. There was no one up there. No fire trucks.”

How to help those affected by the Marshall fire

Mike Zoltkowski, who lives nearby and took video of the burning shed as the winds were kicking up said that he saw the first fire trucks arrive to block the roads at around 11:15 a.m. By 11:45 a.m., he witnessed the shed engulfed in flames and saw three people huddled around a truck. One of the men had separated his shoulder and the other two were helping him get to safety. He asked what was going on and he said they told him that one of their buildings had caught fire, and that “everything was under control,” remembers Zoltkowski. “It sure didn’t look under control to me.”

Still another neighbor who wished only to be identified as June because of the sensitive nature of the investigation, told The Gazette that there’s a fire pit on the Twelve Tribes property that is often burning and at times, it would spit embers into the air which wafted to her yard. “I’ve called the sheriffs on this issue for a year and they kept telling me that there was nothing they could do,” said June.

She said she was so furious about the “on and off burning in the fire pit” that she once walked over to the property to ask the people who live there to put the fire out. “They told me that they could do whatever they want to on their land. When I told the sheriffs, they agreed.”  June said that she often saw people on the compound burning something in the fire pit. “They have a front-end loader and they’d scrape their crap or whatever they’re burning together and put it into this pit.” She said that there have been nights that she could see the orange flames from the fire pit lighting up the darkness.

Was there anyone tending the fire during those nighttime sightings? She shrugged her shoulders. “I am going to give the sheriff some time to sort this out and if he doesn’t I told him I’m going to the media,” she said.

June said that at 4 p.m. on Dec. 30, the front end loader was furiously dumping dirt on the fire pit to try and put the fire there out. She called the fire department who she reports told her that the fire truck had run out of water.

A log on the Mountain View Fire Department website shows exact times and locations of what one of its firetrucks was working on in the area of Marshall Road and Highway 93 on the morning of Dec. 30.

“At 11:39, Louisville Battalion 2760 arrived and assumed Marshall Command, requesting additional resources from the City of Boulder. Command advised of a shed on fire north of the Park-n-Ride and requested next due united to respond there,” reported the log.

There are varying accounts as to whether Dec. 30 carried a Red Flag warning. Boulder County Sheriff Joe Pelle has said publicly that there was a warning, but Boulder Regional National Weather Service told Colorado Public Radio that it did not call for a Red Flag warning for Dec. 30 because though the winds were high and the fuels were cured and dry, a third element required for the Red Flag classification, humidity levels, were not lower than the 15% threshold. Pelle has said in press conferences that the neighborhood at Marshall Road and Highway 93 is at the center of the investigation. Numerous requests to the Boulder County Sheriffs for records of the number of times deputies were called to the property was denied by authorities citing that this is an ongoing investigation.

The National Weather Service reports that winds were gusting from 81 miles per hour in South Boulder and up to 99 miles per hour at Highway 93 and 72, which is within a mile of the Twelve Tribes property. By noon, that spot had a peak gust of 115 miles per hour. Those strong winds shifted east toward all of Superior and most of Louisville between 12:30 and 2 p.m. The winds started calming down “through the afternoon and late evening hours, but unfortunately, much of the destruction had been done,” according to the NWS Boulder website.

On Old Marshall Road, Jeff Giddings was watching as firefighters across the street sprayed water on the first casualty of the 2021 Marshall Fire. “We don’t have hoses here. We are on a well. The trucks were running out of water,” said Giddings. The flames so red hot, his face hurt. At 4:30 p.m., firefighters had to give up.

“That’s when we realized we might not make it, said Giddings. "We grabbed our computers and some papers and got out of there, but we figured our house would be gone when we got back." His house, which used to be a gas station, was spared.

He remembers that once the fire was out, and homes were smoldering, his neighbors came over to borrow a shovel. “I thought they wanted to put out the embers. But they needed help burying their dog.” Giddings showed a reporter a charred limb sticking out of the black dirt. Behind it was a statue of cherub. “It was a little black mutt…some kind of lab I think,” said Giddings as he walked past melted metal doors and patio furniture.

Tuesday afternoon, a home assessor from American Family Insurance was questioning residents, an Excel truck was working on gas meters and crews on ladders assessed power lines. Dozens of law enforcement vehicles parked on the perimeter of the Twelve Tribes property including the Boulder Police Department bomb squad van, several fire K-9 trucks, and Boulder County Sheriffs vehicles. Investigators blocked off an adjacent dirt road and new fences protected structures which dot the inside, most of which were still standing. A group of law enforcement vehicles surrounded the shed on the western edge of the property which has been shown in videos taken by residents and gone viral.

Bob Gabriella’s son lost his home on Old Marshall Road and didn’t keep up with his insurance. He cries at strange times when a moment hits him, like when he realizes the stucco home his family built on Old Marshall Road is still standing. Out front is the restored Studebaker he saved.

He said the car his dad took his mom out in for their first date is in the garage. He was able to get those treasures out of the fire as it raged around him the afternoon of Dec. 30.

Bob Gabriella knows that neighbors are talking about the Twelve Tribes fire pit; but he has a different view.

“They have been excellent neighbors,” he said, explaining that they saved one of his rental homes from a swarm of invasive bees. “They took the bees and the hive away and brought me back a candle,” he said, adding that children from the compound “march up and down the street.”

He pointed to a bench on his now-ruined property where they like to sit.

As the sun set and snow fell Wednesday evening, the investigators had gone but sheriff's vehicles were still stationed on the corners of the empty Twelve Tribes property.

'Hard parts are ahead of us': Recovery efforts continue for Marshall fire

State officials are working to provide relief for the thousands of Coloradans whose lives were upended by the Marshall fire, the most destructive wildfire in Colorado history that burned 6,000 acres and destroyed nearly 1,000 homes and businesses in Boulder County.