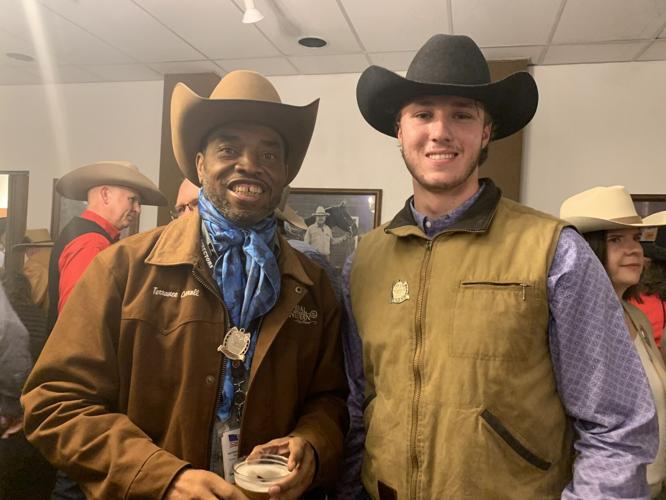 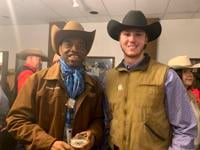 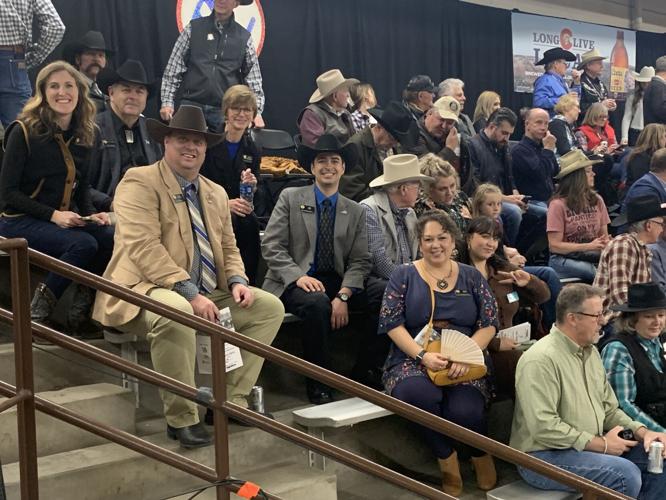 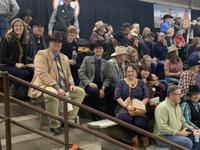 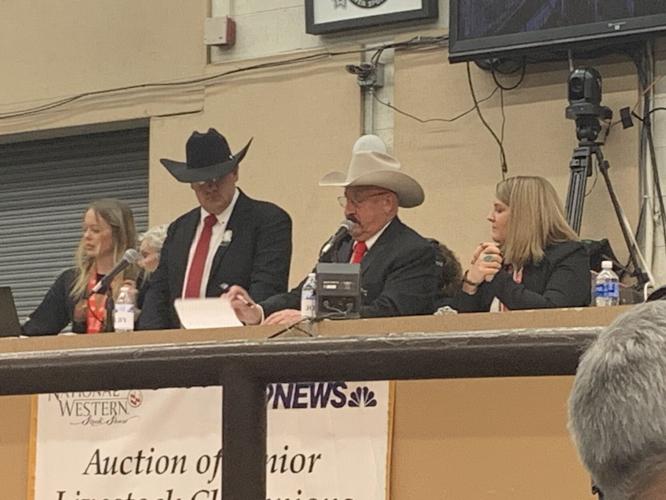 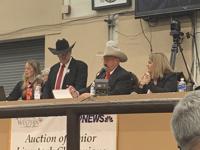 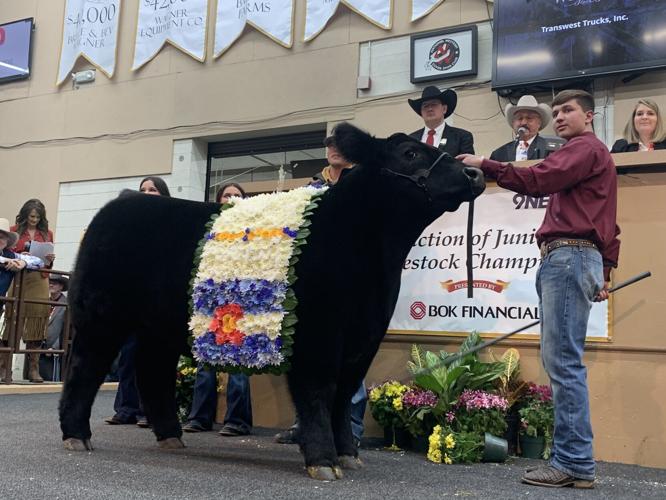 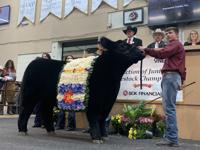 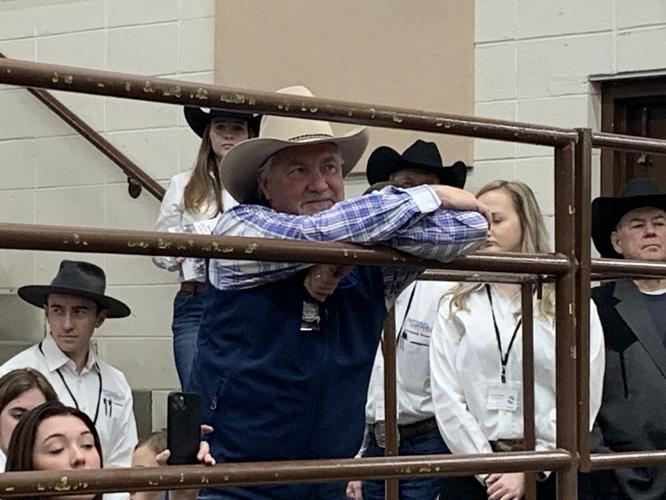 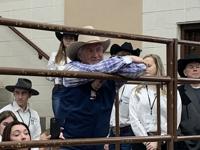 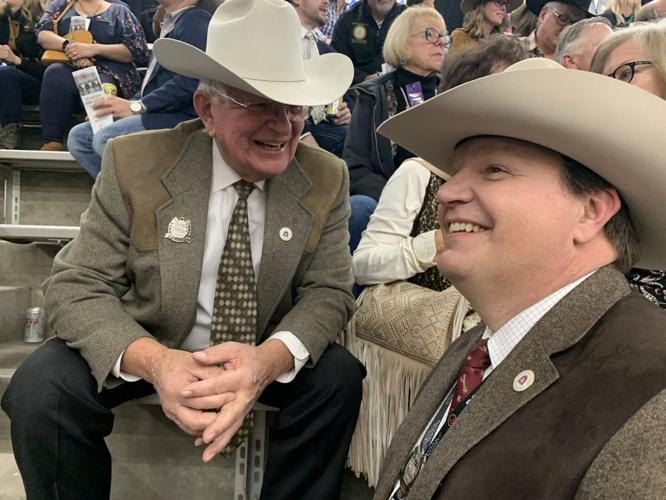 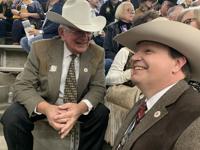 Former Commissioner of Agriculture and state Sen. Don Ament of Iliff, chatting with his son, J.J., president and CEO of the Denver Metro Chamber of Commerce, during the 2023 Junior Livestock Auction, National Western Stock Show. 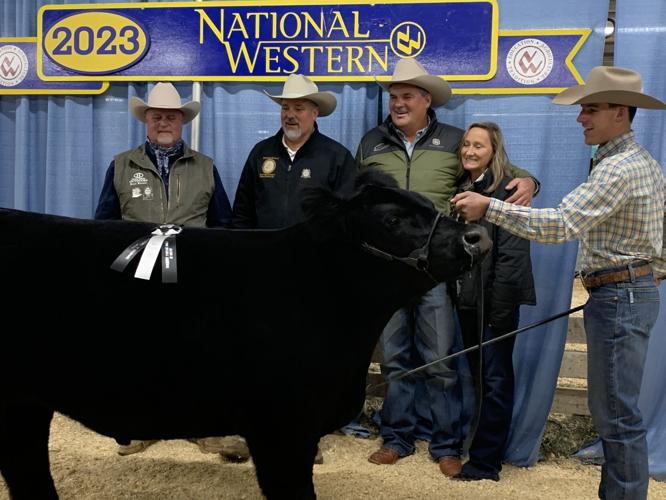 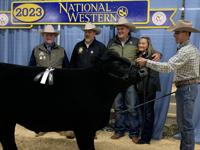 State Rep. Richard Holtorf (second from left) with Nash Richardson of Yuma and his 2nd Place steer, purchased by Holtorf on behalf of the Yuma County Cattle Feeders. 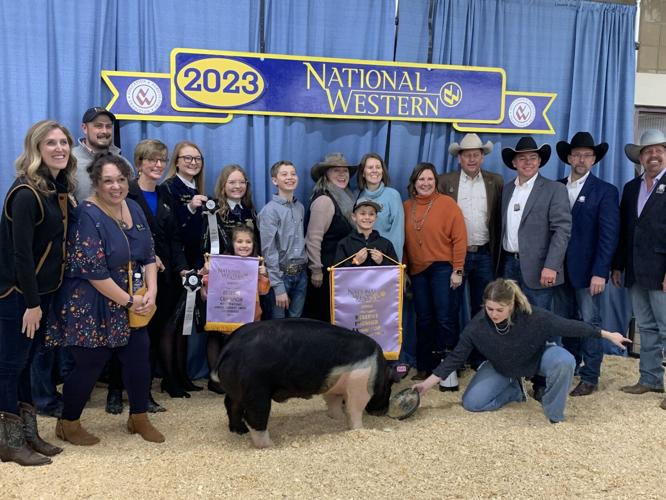 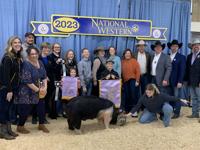 State lawmakers with Landon Charles of Flagler and her 1st place hog. Lawmakers, along with the statewide Future Farmers of America, bought Charles' hog for $21,000 at the 2023 Junior Livestock Auction, National Western Stock Show. 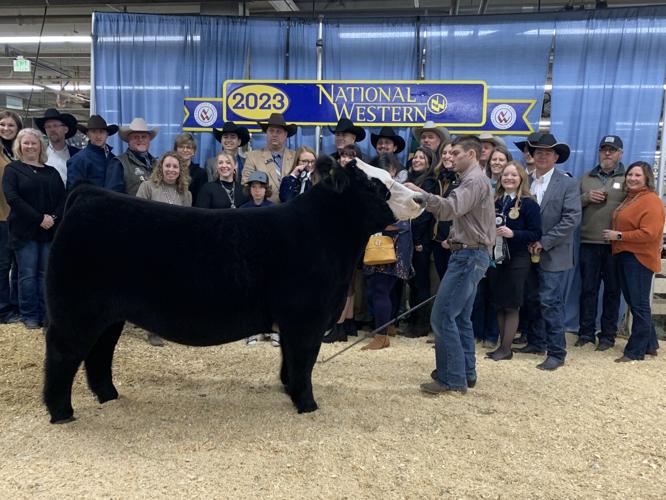 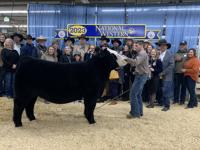 Former Commissioner of Agriculture and state Sen. Don Ament of Iliff, chatting with his son, J.J., president and CEO of the Denver Metro Chamber of Commerce, during the 2023 Junior Livestock Auction, National Western Stock Show.

A record bid of $200,000 for a Grand Champion steer led off the highlights for Friday night's National Western Stock Show Junior Livestock Auction.

That the exhibitor — 18-year-old Justin Pfannebecker — is from LaSalle, Colorado, made it all the sweeter. Pfannebecker is the first teen from Colorado to win the title of the Grand Champion steer in more than a quarter-century.

Pfannebecker and his mom both shed tears after the winning bid. Justin has been showing steers and hogs since he was eight and plans to use the money to attend college at West Texas A&M.

Ames Construction of Aurora made the winning bid for "Stan the Man."

Colorado teens did very well Friday night, with their livestock driving up prices into record territory during the three-hour auction at the National Western Beef Palace auction arena.

The Reserve Grand Champion hog, "Lil G"," shown by 16-year-old Karsyn Fetzer of Kersey, won $75,000, a bid from Occidental Petroleum. That, too, set a record for the highest price ever paid for a hog.

Ninety percent of the proceeds goes to the exhibitor, and many said they would put those funds toward their college educations. Ten percent goes to the National Western Scholarship Trust, which funds agriculture studies and rural medicine scholarships at colleges throughout Colorado and Wyoming. This year, 110 students received funds to aid their education.

Weekend things to do around Denver and beyond

Eight lawmakers from the Colorado General Assembly, with $23,000 in hand, won bids on two livestock exhibited by Colorado teens.

The state Senate, with its 35 members, collected about $3,500 in donations for the auction; the state House fell woefully behind, with its 65 members contributing only about $1,500. The rest came from the lobby corps, collected by Landon Gates of Capitol Focus, LLC, who counts the Colorado Cattlemen's Association among his ag clients.

The first animal to be won by legislators was a first place crossbred hog, exhibited by Landon Charles of Flagler. While he cheered the teen, House Minority Leader Mike Lynch of Wellington bemoaned his colleagues' choice of a hog. "Bad optics," he joked.

The winning bid of $21,000 was split between the lawmakers and the statewide Future Farmers of America.

Ninety-five animals were auctioned off in all, and with at least $12,000 still burning a hole in lawmakers' pockets, it came down to the very last animal of the auction: a third place steer crossbred exhibited by Jake King of Cope, in Washington County, who showed off his steer while hobbled by a broken foot. King said he broke it playing basketball.

The winning bid of $38,000 was a collaboration between the lawmakers, FFA and Occidental Petroleum.

Former Speaker of the House Terrance Carroll, a member of the stock show board, also attended the auction.