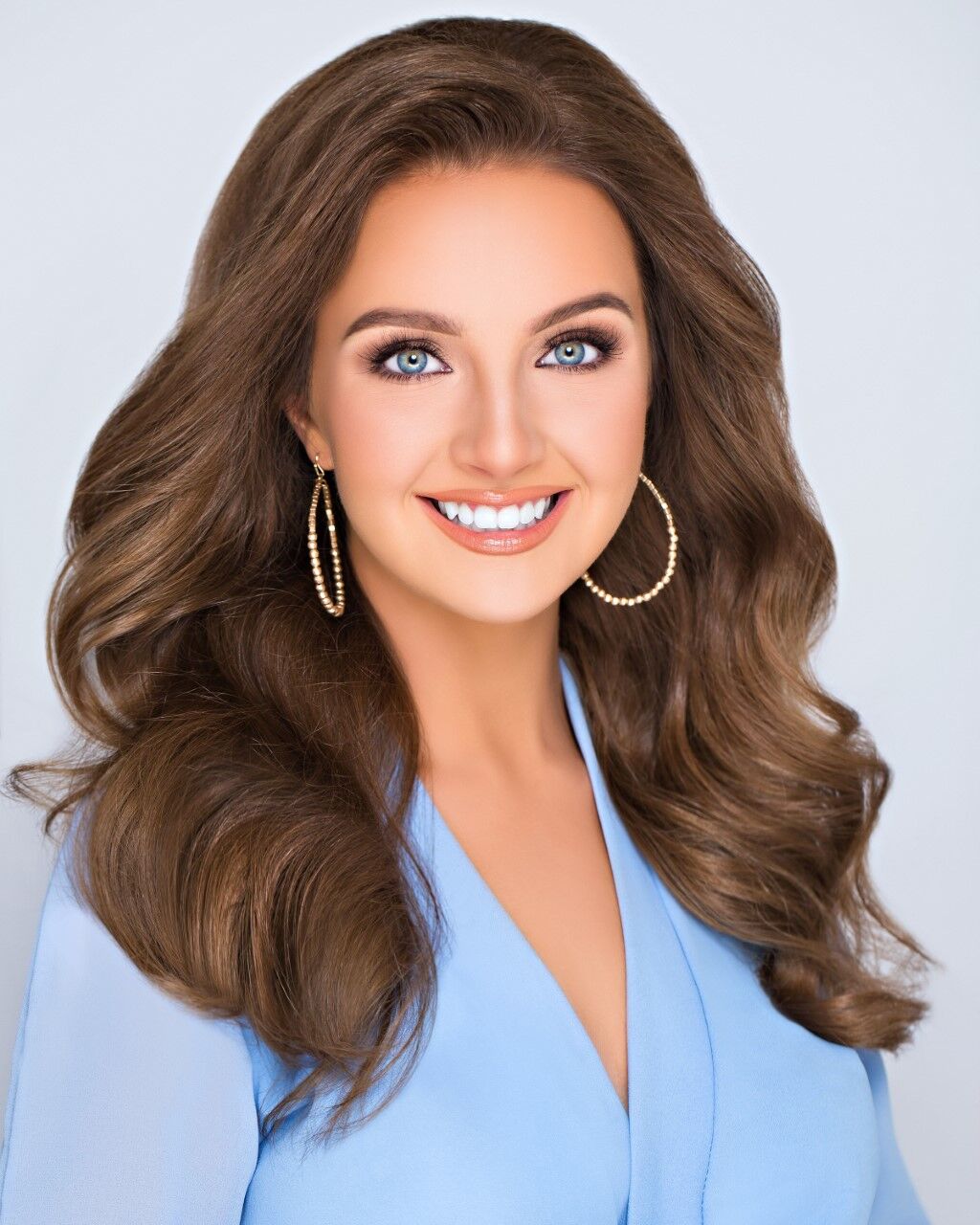 Spc. Maura Spence-Carroll, 21, of Katy, Texas, works as an intelligence analyst at Fort Carson. She will be competing in the Miss Colorado pageant on June 8, 2021. 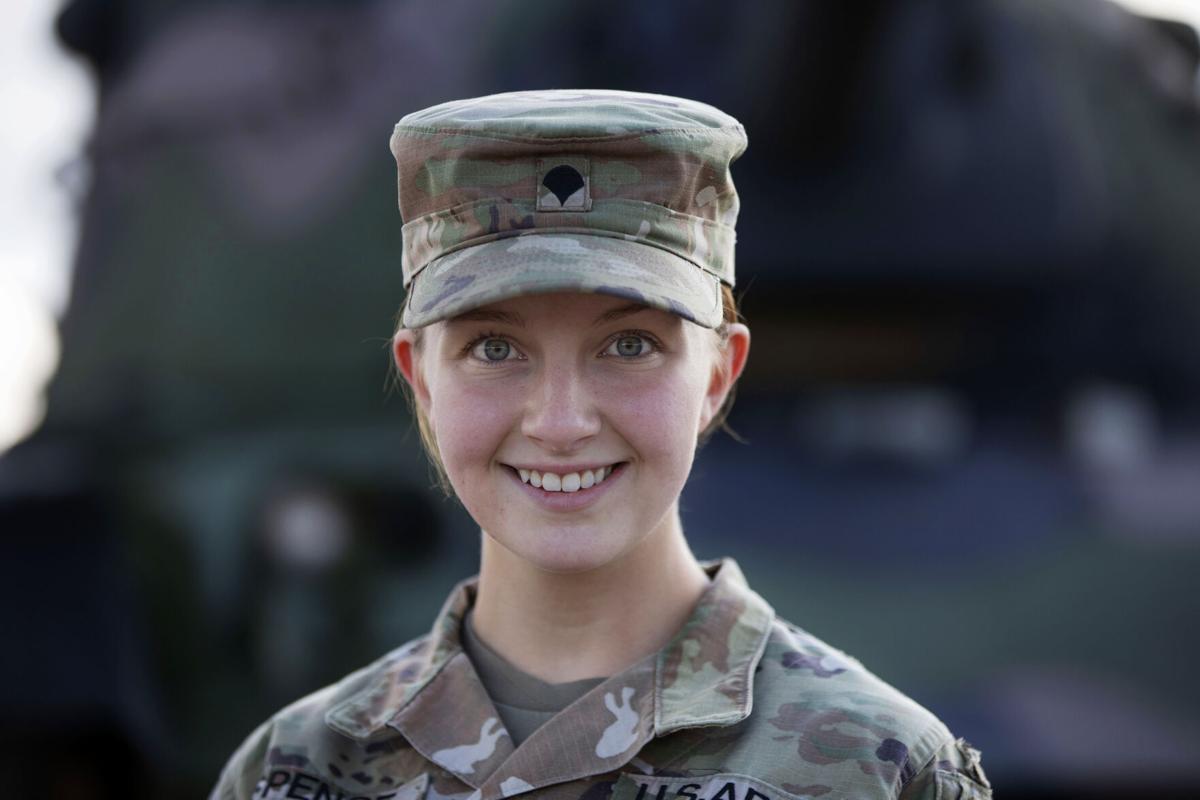 Spc. Maura Spence-Carroll, 21, is competing for Miss Colorado. She earned the title of Miss Fort Carson in February. (Chancey Bush/ The Gazette) 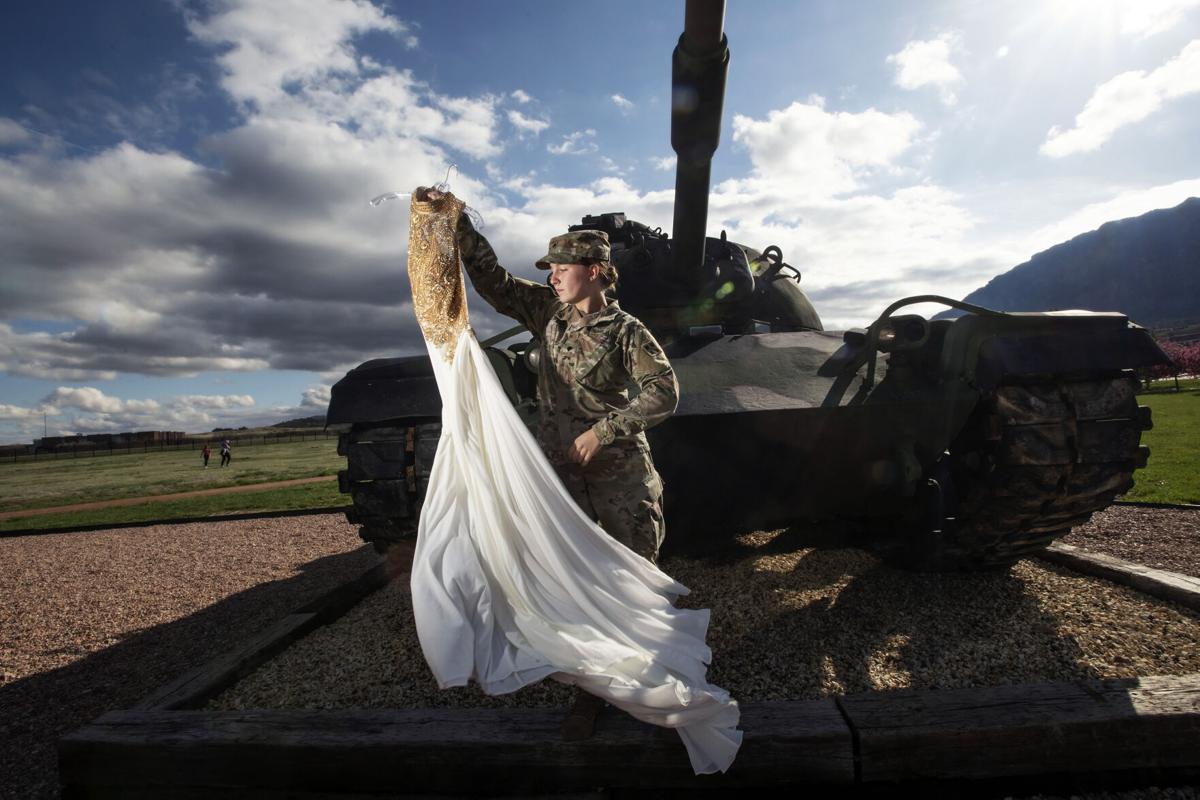 . Spence-Carroll joined the Army in 2018 and is competing for Miss Colorado. She earned the title of Miss Fort Carson in February. 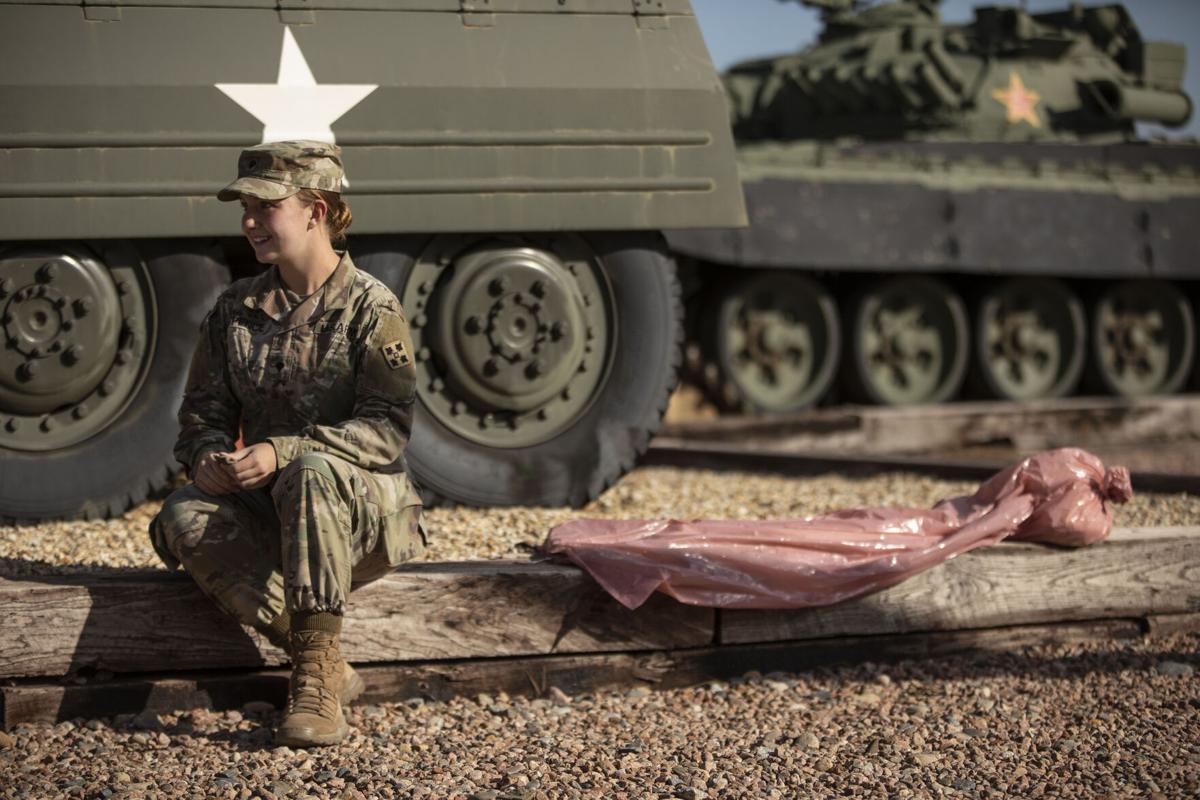 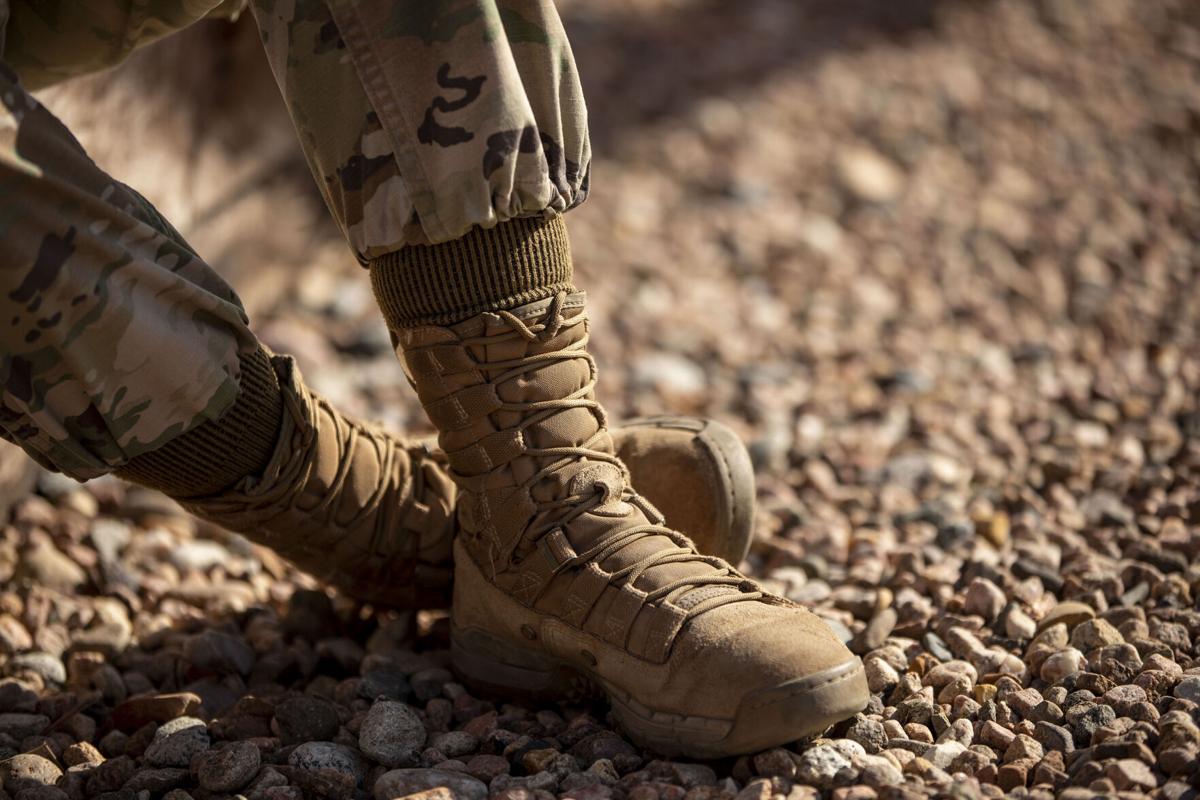 Spc. Maura Spence-Carroll, 21, is competing for Miss Colorado. She earned the title of Miss Fort Carson this past in February. (Chancey Bush/ The Gazette) 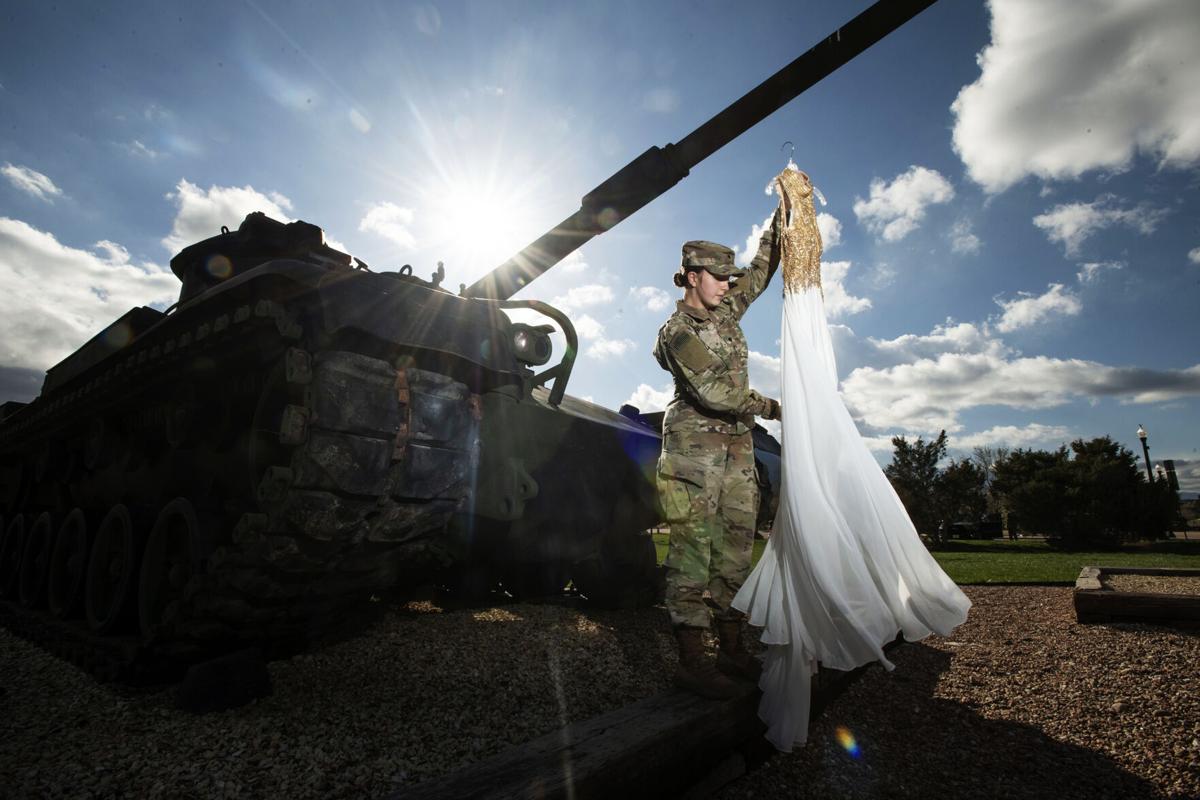 Spc. Maura Spence-Carroll, 21, holds her gown at Fort Carson military base south of Colorado Springs on Wednesday, May 12, 2021. Spence-Carroll joined the Army in 2018 and is now competing for Miss Colorado. She earned the title of Miss Fort Carson this past in February. (Chancey Bush/ The Gazette)

Spc. Maura Spence-Carroll, 21, of Katy, Texas, works as an intelligence analyst at Fort Carson. She will be competing in the Miss Colorado pageant on June 8, 2021.

. Spence-Carroll joined the Army in 2018 and is competing for Miss Colorado. She earned the title of Miss Fort Carson in February.

Spc. Maura Spence-Carroll, 21, is competing for Miss Colorado. She earned the title of Miss Fort Carson this past in February. (Chancey Bush/ The Gazette)

Living with anxiety, depression and undiagnosed attention deficit hyperactivity disorder was hard enough, but when her 5-year-old sister drowned after falling off a dock in 2015, Maura Spence-Carroll was devastated.

“That was the first time I had ever experienced monumental loss. It changes you,” she said. “I was more depressed than I had ever been in my life because I was already living with a chemical imbalance that led me to being lethargic and sad all the time. Now I needed to accept the fact that my sister was gone — this person who I thought was going to be going through life with me forever.”

Life became even more challenging the following year when her grandfather and veteran Bob Boyett died. Boyett served in the Air Force in the 1960s, working in military intelligence at NORAD in Cheyenne Mountain in Colorado Springs before being hired by the CIA.

“He had a great deal of pride in serving his country well,” said Spence-Carroll — who is stationed at Fort Carson and this year was named Miss Fort Carson — during an interview with The Gazette. “It is really important to me to carry on his legacy, serve well and make him proud.”

Spence-Carroll graduated from homeschooled high school in 2017 in Katy, Texas. She attended one semester at Houston Community College but quickly realized the cost and debt she would have to take on to earn a degree was too much. One day she was scrolling through Facebook at home when an advertisement for the Army popped up. She talked with a friend, a retired veteran who said she loved her time in the Army.

"I wanted to do something that would make people proud, that was kind of cool and would give me life experience," Spence-Carroll said.

She joined the Army in 2018, and the now 21-year-old specialist is thrilled to be based at Fort Carson, working as an intelligence analyst for 2nd Battalion, 23rd Infantry Regiment, 1st Brigade Combat Team, 4th Infantry Division.

Though she loved her job, Spence-Carroll was still struggling.

“I felt like I was barely treading water, trying to keep up with everything,” she said.

She reached out for help and was diagnosed with ADHD last October.

“Because of treatment and because I have a great support system, I am thriving,” she said. “I’m so incredibly thankful to the providers I have and especially the leadership I have because if it weren’t for them, I would still be struggling.”

With May being Mental Health Month, Spence-Carroll would like all military personnel to embrace mental health care to reduce the number of suicides.

“An estimated 1 million Coloradans (roughly 20% of the population) live with a behavioral health condition and we know the compounding traumas of the last year have only worsened mental health,” Gov. Jared Polis said when he signed a bill into law last month tasking the Colorado Department of Human Services to establish the Behavioral Health Administration by July 2022.

“It is important to destigmatize mental health care, especially in the military,” Spence-Carroll said. “It is very important because that is the first step that’s preventing service members from receiving care. They feel like there is going to be a stigma, either socially, through their chain of command or professionally, and that should not exist.”

“The problem is the DOD is doing a lot of really good things … but you need to attack the stigma from every level. You need to make it clear that jokes that are calling people weak … aren’t OK.”

Spence-Carroll struggled at school, constantly talking in classes and not paying attention before her mother pulled her from traditional public school in the eighth grade in favor of home-school.

When Spence-Carroll was 5, she watched the Miss America pageant for the first time. By fifth grade, her mother, Cidnie — a singer in a Celtic rock band for many years — began teaching Spence-Carroll how to sing classical music.

Spence-Carroll learned "Con te Partirò" by Andrea Bocelli and fell in love with it.

She has been competing in pageants for nearly a decade and continues getting help from her mother via Zoom, where they often discuss musicality, technique and phrasing.

Spence-Carroll will be singing "Con te Partirò" as her talent June 8 in Parker at the Miss Colorado pageant.

She earned the title of Miss Fort Carson in February after going through a competitive application process the Miss Colorado Scholarship Organization uses to select representatives ahead of the state pageant. She is excited to potentially be the first, or one of the first, active-duty soldiers to win the crown of Miss Colorado.

Spence-Carroll had COVID-19 and was quarantining in her barracks, “sick as a dog,” when she learned she was selected to compete for Miss Colorado.

“I was so excited. I called my mom, friends and grandma,” she said.

Pageants have been a huge benefit for Spence-Carroll, who says she has learned to be a better public speaker, has gained confidence, is more self-assured and is willing to take bigger risks.

She loves the friends she makes at pageants and likes meeting people with a similar mindset and work ethic to her own.

"That’s another thing people don’t realize about Miss Colorado, Miss America, there is so much work put in,” she said. “I’ve told my coworkers I don’t just show up and be pretty. I put a lot of work in. I speak to children at Boys and Girls clubs and YMCAs. I fundraise and raise awareness and on top of that I work full time. I wish people understood it is a valuable hobby in that you grow. You get out of it what you put into it. I wouldn’t have the growth that I’ve had if it wasn’t for the fact that I was willing to work for it and willing to grow."

“I’m going to put my heart into it and compete the best that I can,” Spence-Carroll said. “If it’s just not my day, then it’s not my day. That’s OK, because I’ll deploy and then come back and compete again. If they do choose me as Miss Colorado, I’ll be thrilled and I’ll represent Colorado to the best of my abilities and go to Miss America and have the time of my life and fulfill a lifelong dream.”

Thank you.  That's the message first lady Jill Biden shared with military spouses during a visit to Fort Carson on Thursday, a day ahead of Military Spouse Appreciation Day.