The judge who would have presided over Barry Morphew's murder trial has resigned from the 11th Judicial District, citing health reasons.

In his resignation letter, dated April 26 and addressed to Colorado Supreme Court Chief Justice Brian Boatright, Judge Ramsey Lama wrote: "After about six years on the district court bench, it is time for me to move on."

Morphew, 54, walked out of the Fremont County Courthouse a free man April 19 after Lama dismissed the case without prejudice. Morphew was arrested May 5, 2021, but was released from jail on $500,000 bail in September.

When a case is dismissed "without prejudice," the process grinds to a halt, but the case can be refiled. 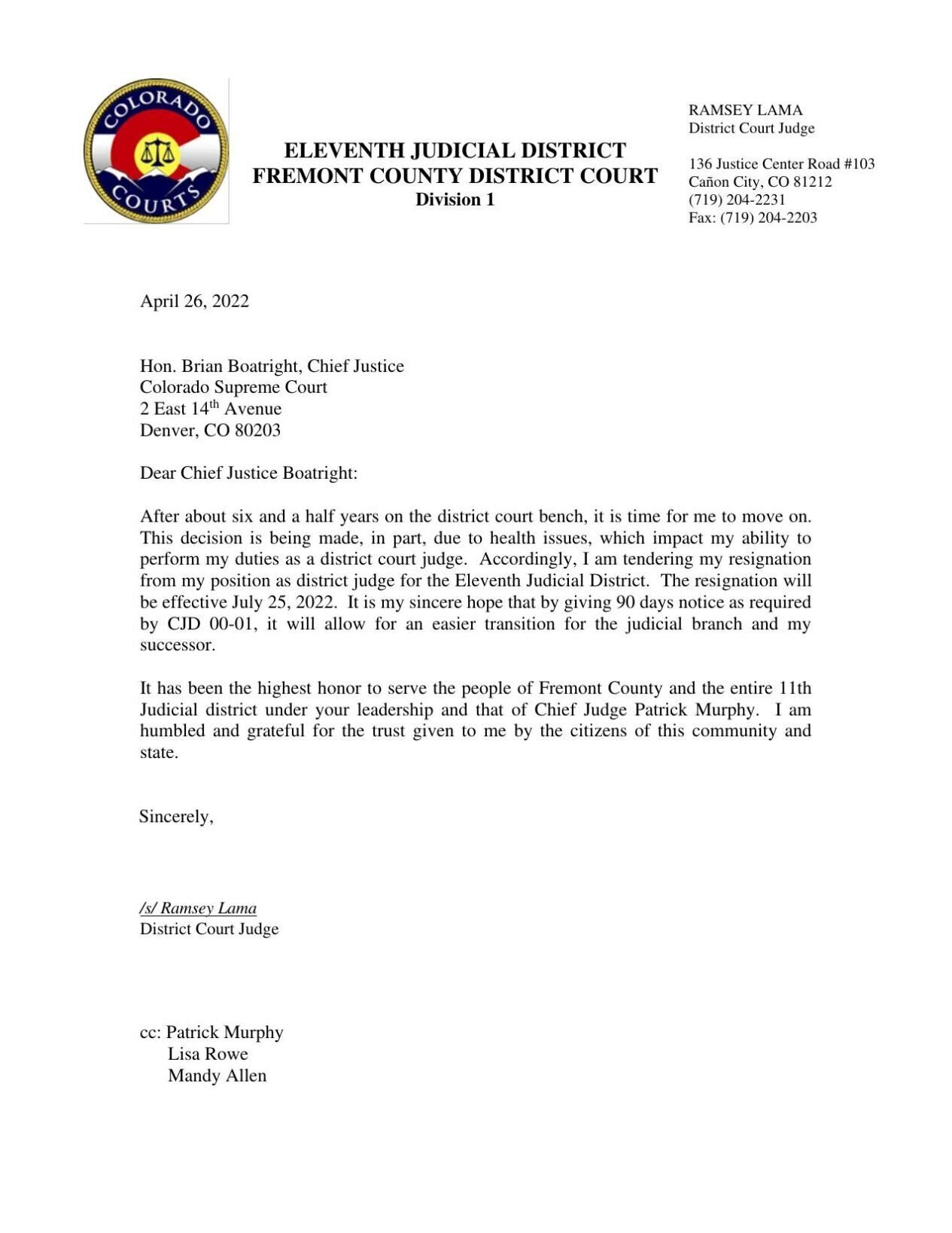 If the prosecution decides to refile the case, it will go to the judge who is next in the rotation, said Jon Sarche, a spokesman for the State Court Administrator's Office. Still to be determined is whether a second attempt at trial would be held in Chaffee County, where it was originally filed, or in Fremont County, where it was moved after Lama was appointed to preside over the case when Judge Patrick Murphy recused himself in January.

Murphy was a lifelong friend of one of the attorneys who represented Morphew's girlfriend in a related court matter, which has since been thrown out.

Barry Morphew was accused of murdering his wife, Suzanne Morphew, and jury selection was set to begin this week in Fremont County. Court officials had already sent 1,000 summonses to prospective jurors by the time Lama approved the prosecution's request for dismissal without prejudice. Prosecutors said they did not have enough evidence to obtain a conviction, largely because authorities have not found Suzanne Morphew's body.

"If they were to refile the case, it would be refiled as a new case. All prior issues would be viewed through fresh eyes, but technically the prior rulings would not stand," former New York and Colorado prosecutor Ryan Brackley said. "It's my guess that if the case is refiled, it would stay in Fremont County."

In a move that had prosecutors fuming and defense attorneys pumping their fists, Lama rejected 12 expert witnesses for the prosecution in a ruling April 8, chastising prosecutors for being "reckless" and missing deadlines. The order crippled their case because the barred opinions included cellphone, telematics and DNA experts.

In an email confirming Lama's resignation, Robert McCallum, a spokesman for the Office of the State Court Administrator, said Lama plans to enter private practice.

"About a year ago, Judge Lama began to consider stepping down from the bench. Prior to making his announcement at that time, Judge Lama was assigned a number of murder cases in Fremont County and agreed to see those cases through," McCallum wrote. "When People v. Barry Morphew was reassigned by the Chief Justice, Judge Lama agreed to take that case and intended to make it one of his last assignments on the bench."

Suzanne Morphew, 49, disappeared between May 9 and 10, 2020. Prosecutors have said they believe they know where her body is but that they're waiting for the spring thaw to excavate in an area near the Morphew couple's former home near Salida.

"Even if they do indeed find Suzanne's body, refiling is not that simple," Brackley said. "The defense will likely argue that the original case was dismissed and refiled strategically to get around the rulings Lama made that they didn't like."

CAÑON CITY • After months of uncertainty, including a change of venue, musical chairs with two judges, and the dismissal of 14 of 16 expert wi…