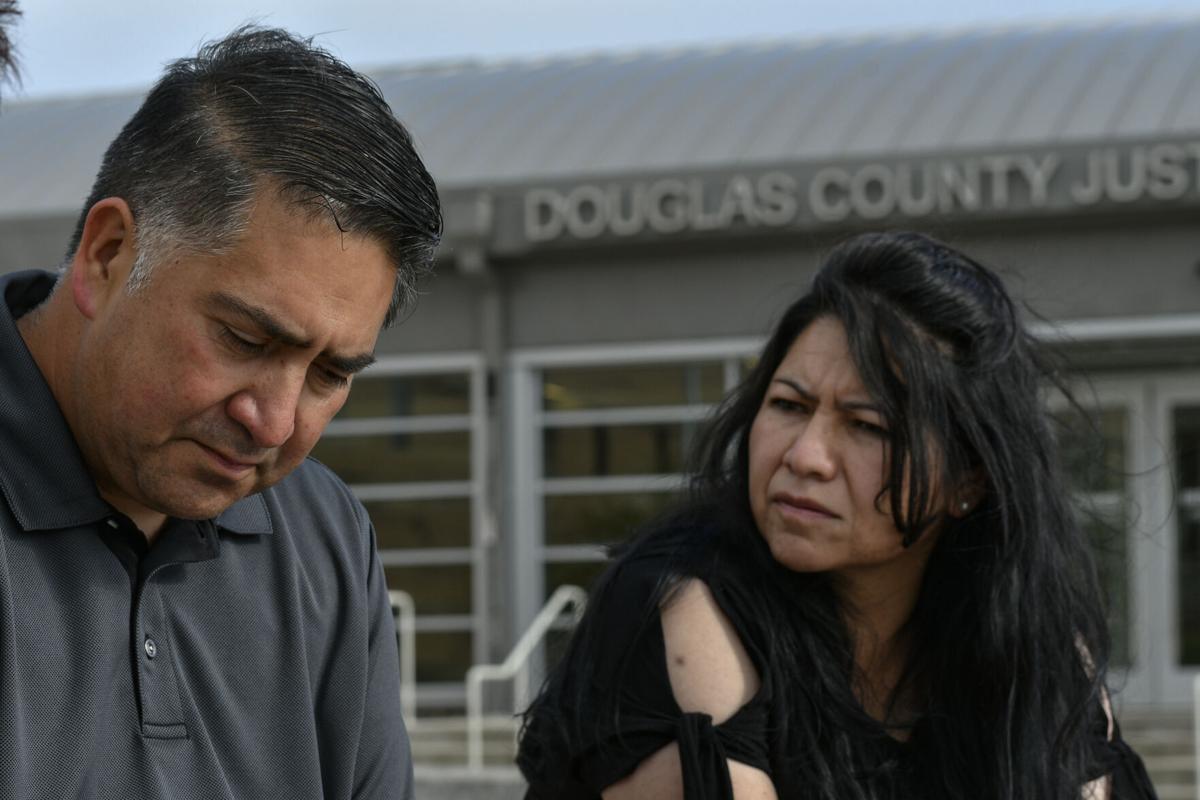 John and Maria Castillo, the parents of Kendrick Castillo, speak after the May 28 hearing outside the Douglas County Justice Center in Castle Rock. 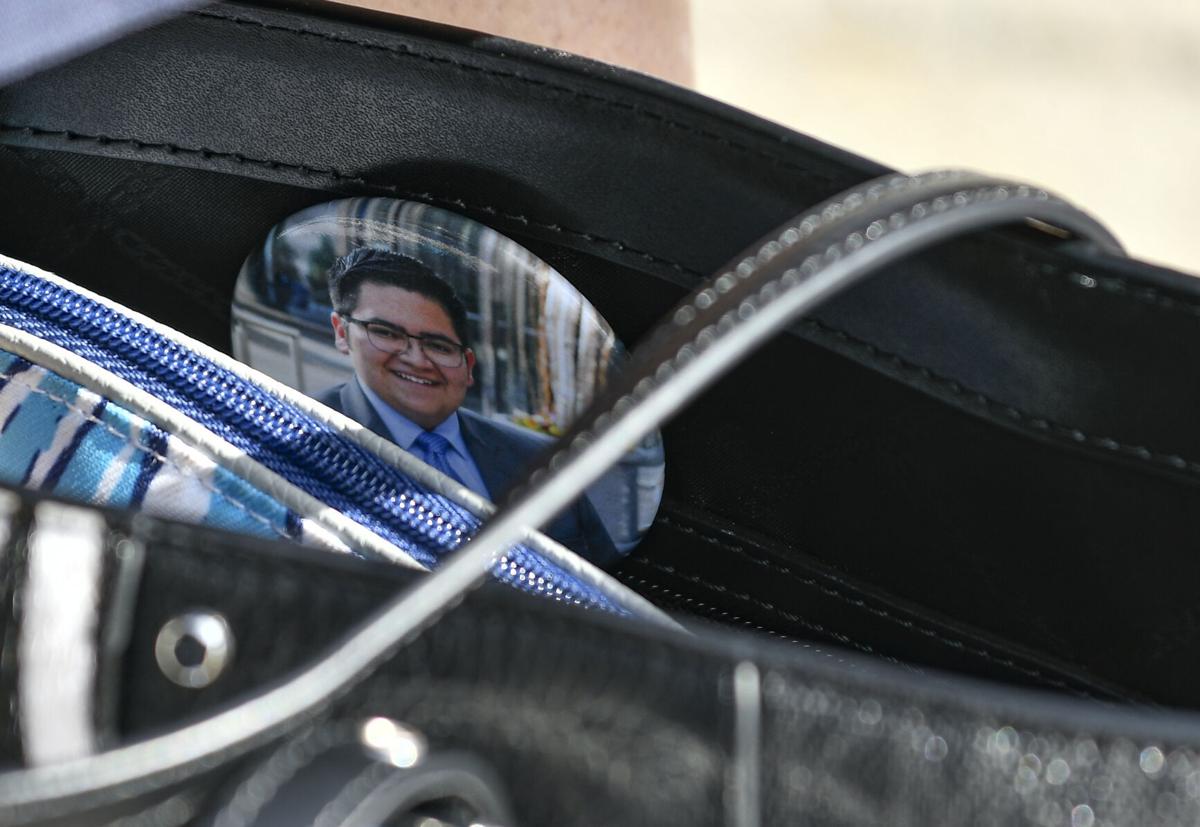 outside the Douglas County Justice Center in Castle Rock. Kendrick Castillo was killed in the STEM School Highlands Ranch shooting in May 2019. Eight were wounded. 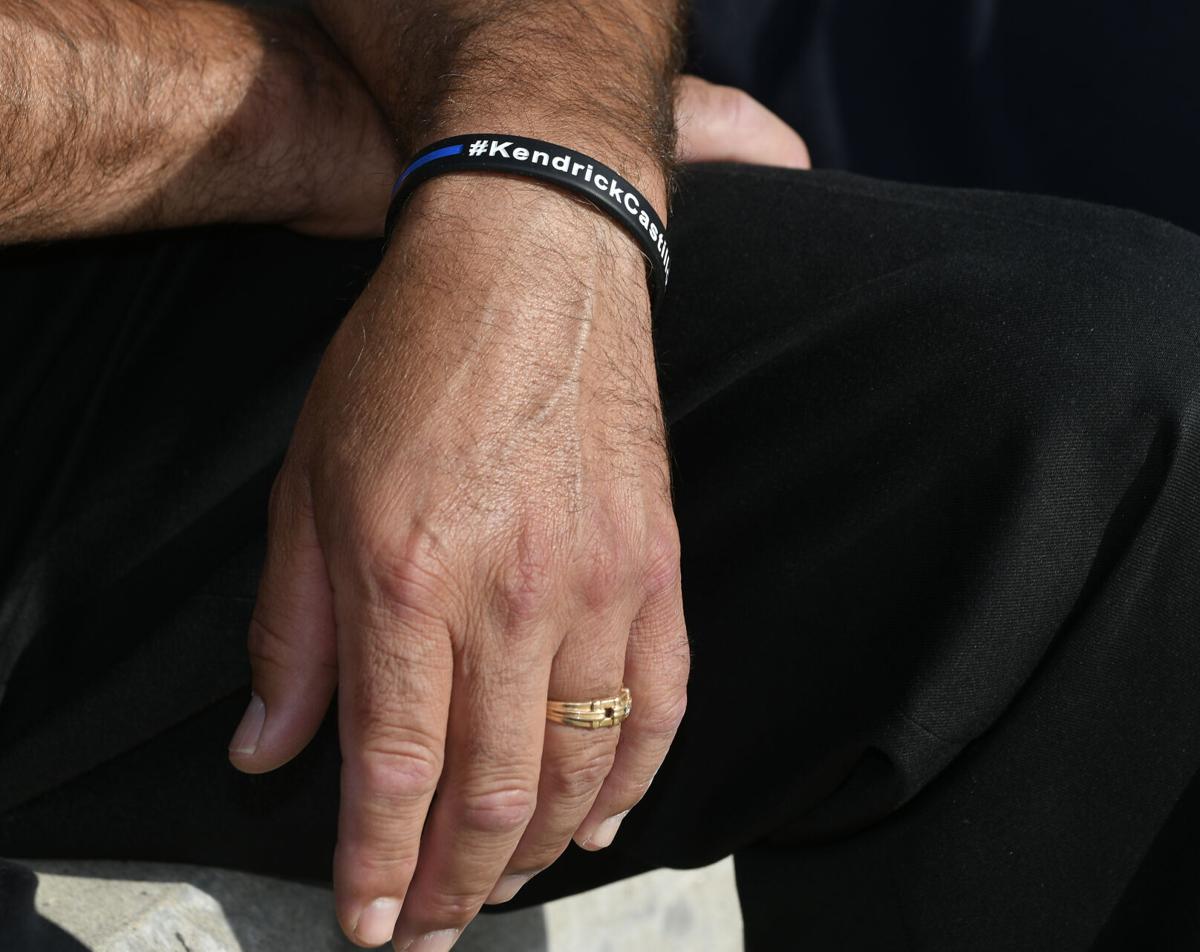 John Castillo wears a #KendrickCastillo wrist band in honor of his son. John and Maria Castillo took time for an interview after the hearing

outside the Douglas County Justice Center in Castle Rock

John and Maria Castillo, the parents of Kendrick Castillo, speak after the May 28 hearing outside the Douglas County Justice Center in Castle Rock.

outside the Douglas County Justice Center in Castle Rock. Kendrick Castillo was killed in the STEM School Highlands Ranch shooting in May 2019. Eight were wounded.

John Castillo wears a #KendrickCastillo wrist band in honor of his son. John and Maria Castillo took time for an interview after the hearing

outside the Douglas County Justice Center in Castle Rock

The trial of the second person accused in 2019’s mass shooting at STEM School Highlands Ranch started with emotionally charged testimony from former students and staff members, with many details coming into the public eye for the first time.

Kendrick’s parents, John and Maria, sat down with The Denver Gazette at the end of the trial’s first full day on May 28. Maria Castillo broke down when talking about hearing details of her son’s death for the first time from testimony. When John Castillo talks about that struggle reconciling the principles of their Catholic faith to be forgiving with their inability to forgive Erickson, the conflict is evident in his tone of voice and furrowed brow.

They talked about the “roller coaster” of emotions they’ve gone through during the the beginning of the trial, thinking about the emotional weight survivors of the shooting have to carry, and their view that their guilt over struggling to forgive the defendant is evil still at work.

Gazette: Walk me through the emotions you've been going through in the last, say, 24 or 48 hours as we've been coming up to the start of the trial.

John Castillo: We both talked about what we would be facing and what we should expect with each other. But even with those conversations, it's still not enough to prepare you.

So with that said, the things that we're hearing just are unbelievable. The testimony from the brave students who witnessed what they witnessed that day of our son being murdered; hearing faculty describe how he was laboring with breathing, trying to speak; nothing prepares you for that. It's hard to hear those things.

And then it goes from sorrow and pain to anger. I wonder how you can have defenders and the defense trying to paint an opposite picture than (what) we feel to lessen the charges for the defendant. So there's a whole rush of emotions that we can't even begin to describe in detail. I think they just come upon you.

Gazette: And if you're comfortable talking about it, can you tell me, in terms of (emotionally) preparing for the trial, did the prosecutors help prepare you for what was coming up, or was the preparation more just from going through this for the last two years and knowing the roller coaster of emotion?

John Castillo: On the first shooter, the preparation was there and what to expect. For this one, I think it was just knowing that we had been through it the last time and that it would be the same, but it's intensified. So there was brief conversation about what we can expect, but I think that we just kind of knew inherently what we were going to be doing.

Gazette: Can you just talk a little bit more specifically about what part of the proceedings these last several days brought up the strongest emotions for you?

Maria Castillo: Seeing my son’s blood in the classroom. I didn’t know much about it; how he died. When I hear that he was trying to talk; what was he trying to say?

Note: Prosecutors have not shown any photos of Kendrick Castillo's body, but have shown images of the part of the classroom where he was shot.

John Castillo: I agree. Those are new things that we've never heard before.

There's that. And in my mind, I see all these other opportunities that could have taken place that could have changed this event, and were ignored. And it makes me angry and hurts me.

I wonder why, if somebody was so sickly and they were seen by so many people, they weren't held or (weren’t) sent home or they didn't examine them more. We've heard of the use of drugs, cocaine and other things. And I just think, if you're a physician and you're trained on seeing somebody and they have sleep deprivation for days earlier, that you would take a deeper look.

Gazette: Of course, hearing about Kendrick's death is going to be really difficult. Was there anything you've heard over the past couple of days that brought up emotions that you just didn't expect?

John Castillo: Yeah, lots of things. Seeing Mitchell (Kraus) on the stand and having him talk about these events.

Note: Mitchell Kraus is a former classmate of the defendant who received a gunshot wound to his back and testified the first day of the trial.

We're close, and we know this community and these families. But we've never really spoken about it, and it's not our place to ask or pry, I guess. So under their own willingness and testimony, to hear the things that are coming out (that) are just so powerful, it's unbelievable.

When you see what these kids are reliving and what they're going to carry with the rest of their life, our hearts go out to them because they're never going to be the same. We know through our own experiences with the loss of Kendrick that it's a day-to-day thing. I can only imagine for these kids what's going to happen five years from now, 20 years from now. What's going to trigger what took place on May 7, And how is it going to affect their lives?

We're not the type of people that can let that go. It's not somebody else's problem. They're part of us now, and seeing their pain and the unknown is just unbelievable.

Gazette: I saw the two of you talk a little bit within the last couple of days about how you're not in a place right now to forgive Devon Erickson. Can you just tell me a little bit about that feeling, whatever you want to say about it?

Maria Castillo: There is not enough hate in this world for me. I hate him with all my heart, and I can scream it to the world.

John Castillo: It's what this domestic terrorism has done to continue to produce evil. I'm a faithful person, and our religion and our faith tells us to forgive. But unless you're me or you're Maria — the evil is still working, if you will. It's pitting us against something that we're devout to. I carry a rosary in my pocket and I pray it, but I also feel guilty sometimes. Our love was so strong for our son.

And you feel judged. I don't think we're judged by the faith community; I think that's just the feeling that I get. Our priests, they support us and they pray for us. But what a hard thing. I have never been in a place where you have to make choices like that.

Gazette: When you say making choices like that, you mean between what your faith says and then versus the reality of how you're feeling?

That’s right. We're pro-life people. And we talk about protecting the sanctity of innocent life. But people will paint us as being hypocrites because somebody murdered our son, and we don't want to forgive them. And that's a struggle that we'll have to take to the grave, but it's a struggle nobody should have to do. And again, that's what evil does. That's where we're at, and that's a hard thing.

Gazette: Is there anything that either of you would say to the defendant or his attorneys?

Maria Castillo: I’d rather wait until the end.

John Castillo: I know it's our system, but it's hard for me to understand how somebody can distort an event. I'm not going to call it truth or lack of truth; it's just through this process we've seen how a story can be well-scripted. And if that is your craft, it's like an actor or an actress in a movie. If you can paint an image of a situation to try to save somebody who committed a crime or lessen the punishment, I just don't know how people can sleep with themselves at the end of the day. It's a hard thing for me, and that's what I would say to them.