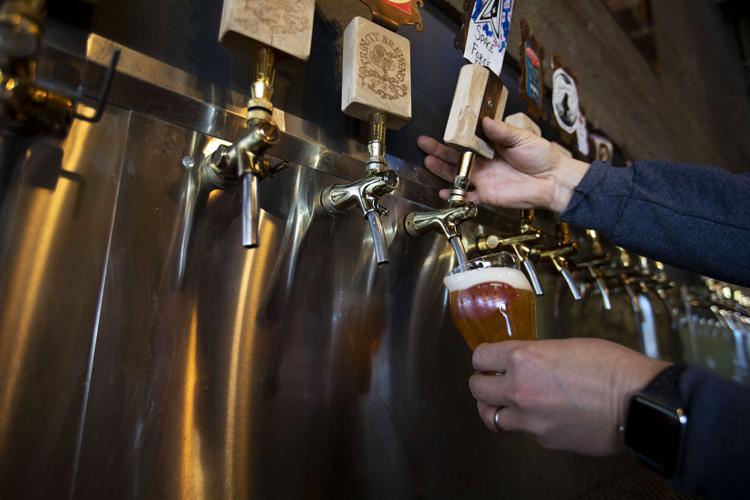 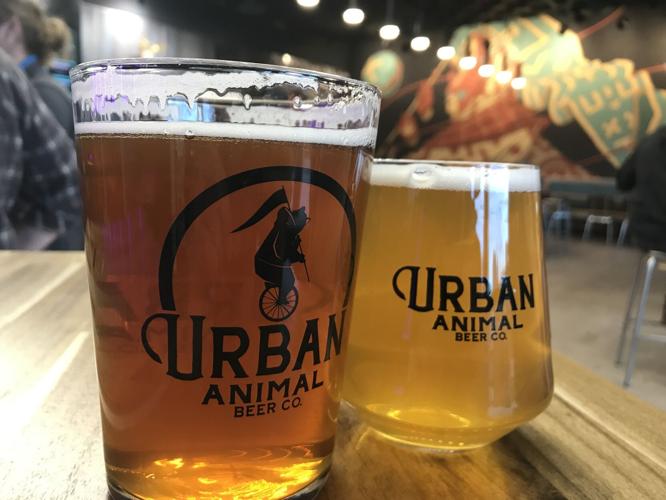 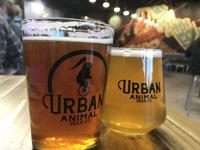 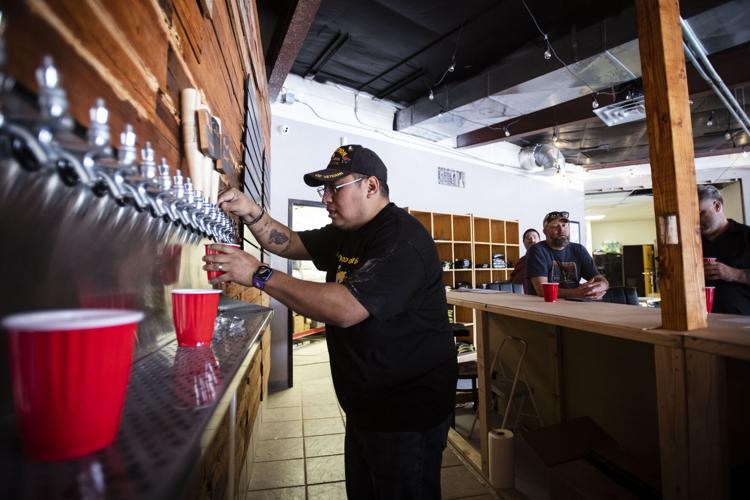 Army veteran Felix Ramirez pours a cup of hand-crafted root beer during a Soda Pop Special event organized by 22 Until None, a nonprofit that helps support veterans and provides resources for veterans and their families, at Wackadoo Brewing. The veteran-owned-and-operated craft brewery opened at 5158 Centennial Blvd. in April 2022. 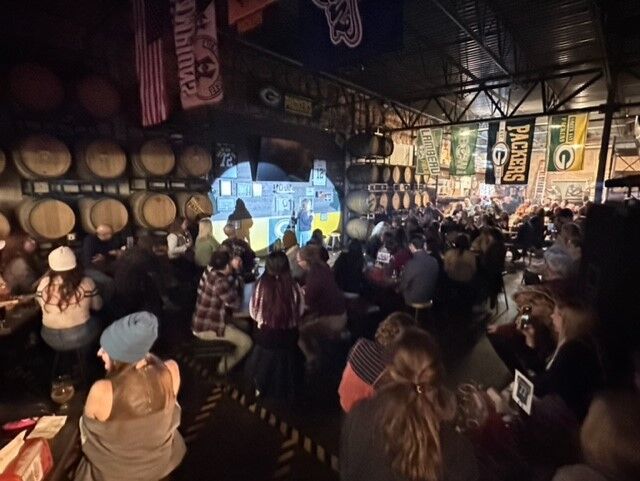 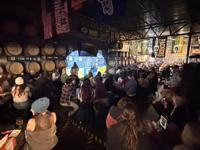 Matt Dettmann bought Trinity Brewing Co. during the height of the pandemic, in 2020, and despite the storms that have swept in since in the forms of supply and workforce shortages, and rising prices — and those looming on the horizon — he's optimistic about the future. 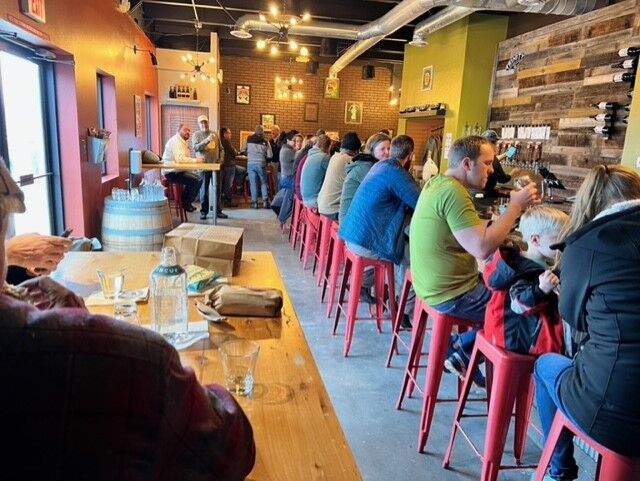 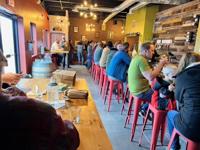 Army veteran Felix Ramirez pours a cup of hand-crafted root beer during a Soda Pop Special event organized by 22 Until None, a nonprofit that helps support veterans and provides resources for veterans and their families, at Wackadoo Brewing. The veteran-owned-and-operated craft brewery opened at 5158 Centennial Blvd. in April 2022.

Matt Dettmann bought Trinity Brewing Co. during the height of the pandemic, in 2020, and despite the storms that have swept in since in the forms of supply and workforce shortages, and rising prices — and those looming on the horizon — he's optimistic about the future.

Even before the pandemic rogue wave swept in to maroon everyone, it was easy enough to live on an island in Colorado Springs. The state’s largest city by area is less urban sprawl than a sprawling archipelago of distinct communities and neighborhoods, which makes it tough to pigeonhole and problematic to parse.

That quality is also a big part of its appeal, as a place to live and — especially — to start a business.

“I’ve been here for 14 years and it still feels like a small town to me. OK, maybe not a small town … but a bunch of small towns, instead of some massive city with a booming population,” said Matt Dettmann, of Trinity Brewing Co., who purchased the award-winning brewery on Garden of the Gods Road during the height of the COVID-19 pandemic two years ago.

He said he thinks the city’s “tapestry” nature makes it something of an urban oddity, as well as a business and brewing mecca that doesn’t feel like it’s tapped out.

“I don’t know how or why, but there’s something about Colorado Springs that is just energetic, inspiring, and very encouraging to people like me,” he said. “We had a really good year, and we’re excited about what’s to come. We have room to grow, and I think we’re going to grow.”

As the sun set on a stormy 2022, not every American brewery owner probably would say the same.

The overall news about brews was far from heady, with industry mavens noting trouble behind and ahead. The once-booming industry, like many, continues to struggle to get its bearings after the pandemic shut downs and subsequent storms that arrived in the form of supply and workforce shortages, and inflation that’s driven prices at the tap and stores to record levels.

According to an annual lookback by the Boulder-based Brewers Association, more than 9,500 breweries were operating in the U.S., a number that reflects more than 500 openings and more than 200 closings through mid-December. The total is higher than it was in 2021, but nothing like the exponential year-over-year growth of recent memory.

The association’s predictions for 2023 are even more sobering. While the nonprofit advocacy group said it expects average prices will dip from 2022 peaks, supply-chain issues will continue, and new brewery openings will be the lowest in “over a decade.”

Let us pause here for a moment of local brewing history and perspective.

In 1991, Colorado Springs had a single brewery, the erstwhile Judge Baldwin’s Brewing Co., which operated out of a brewpub at The Antlers hotel.

The city now is home to more than three dozen craft beer makers, including 2022 debuts Urban Animal Beer Co., off Broadmoor Bluffs Drive, and Wackadoo Brewing Co., in the city’s Rockrimmon neighborhood. Expand the search to include nearby environs, and that number is closer to 50.

More brewers are on the way, as Colorado Springs continues to check the boxes for inspired locals dreaming of startups, as well as established out-of-towners looking for a fresh, and still-thirsty, audience.

Lakewood’s WestFax Brewing Co. is one of them.

“We knew from reading some national articles about Colorado Springs that it had a reputation as being a great place to live, and it was growing tremendously over the last few years,” said Anthony Martuscello, the founder and president of WestFax, which plans to open its second location, a taproom, on the city’s west side in fall 2023.

The south Denver metro company originally had planned to plant those roots closer to its home base, Martuscello said, but property farther south ultimately drew their attention, and investment.

“The market up here (in the Denver area) is getting to that saturation point where not everyone is able to grow at significant rates anymore,” said Martuscello, who opened his brewery in Lakewood in 2016, next door to Casa Bonita, the iconic Mexican restaurant slated to reopen in May under the aegis of new owners and "South Park" creators Trey Parker and Matt Stone.

“I think the Springs has more of an opportunity to grow, grow faster, grow more. I think it’s craving some more attention within the beer market,” Martuscello said. “There are definitely some folks down there doing some great things, but I think the consumer down there wants more.”

Which means the southern Front Range isn’t yet saturated.

But what, exactly, is saturation?

“For me, it’s a point where the pace of breweries opening is outpacing population growth,” said Martuscello.

It’s that feeling of being squeezed, and worrying about a squeeze to come.

"All of a sudden all those breweries that were in planning since 2019 are all starting to go through the process and open their doors,” Martuscello said. As for those who'd already opened those doors pre-pandemic, “I think it feels that a lot of breweries that I know were doing really well up here and are still doing fine. ... They’re not seeing significant growth anymore.”

The potential in the Springs also appealed to Voodoo Brewing, a craft franchise from Pennsylvania that operates on a model similar to BJ’s Brewhouse.

A Springs Voodoo taproom is due to open next year on Garden of the Gods, a few blocks east of Trinity’s flagship brewery and a stone's throw from Trinity's new(ish), second location on Forge Road.

Dettmann opened the expansion in March in the former Red Leg Brewing Co. home base, less than a mile from Trinity’s original location.

Elsewhere, such a move might have inspired worries, whispered utterings of that taboo and oh-so-fluid term that rhymes with maturation. Not in the Springs, and, says Dettmann, not for him.

“There may not be any empirical data to support it, but just going off of a sense and vibe. … Here, it’s a different universe even six blocks away,” said Dettmann, who said the Forge Road business draws a “totally different crowd” whose tastes in brews don’t necessarily align lockstep with drinkers a few blocks west.

He said he believes there’s still room for all, and room for more, in craft brewing in Colorado Springs.

“Even in a year where everything is just beyond expensive in terms of the cost of goods … I’m very hopeful,” he said.

He's not worried about competition.

That doesn’t mean he’s not worried about the future.

“The challenges to optimism right now are very high,” he said, pointing to policy changes in the new year that will impact already shaky bottom lines, including new laws regarding paid sick time and family and medical leave.

“It was harder to make money this year, by far ... and those policy changes could be devastating, because now we’ve got to find room for those expenses, and there just isn’t any more room,” he said. “These are very difficult challenges for brewers and all small businesses. I don’t want to raise prices. I’m not a guy who says $10 a beer is a good value for my customers.”

On that note, and in closing, some historical perspective about the cost of a beer:

A 2013 analysis of the affordability of alcohol and the impact on heavy drinking published in the American Journal of Preventive Medicine found that “alcoholic beverages sold for off-premises consumption are more affordable today than at any time in the past 60 years.”

In 1950, Americans earning the “U.S. mean per capita disposable income” could expect to spend 4.87% of it if they drank just one “popular beer” each day.

The new Studio 32 Discotheque, designed to pay homage to the iconic nightclub Studio 54 in New York City, is now open in the downtown space vacated in June by Latin-American fusion restaurant and club Epiphany. Founder Marie Richard transformed the 5,000-square-foot club into a landscape of pinks and silvers with rotating DJs playing Thursdays through Saturdays.