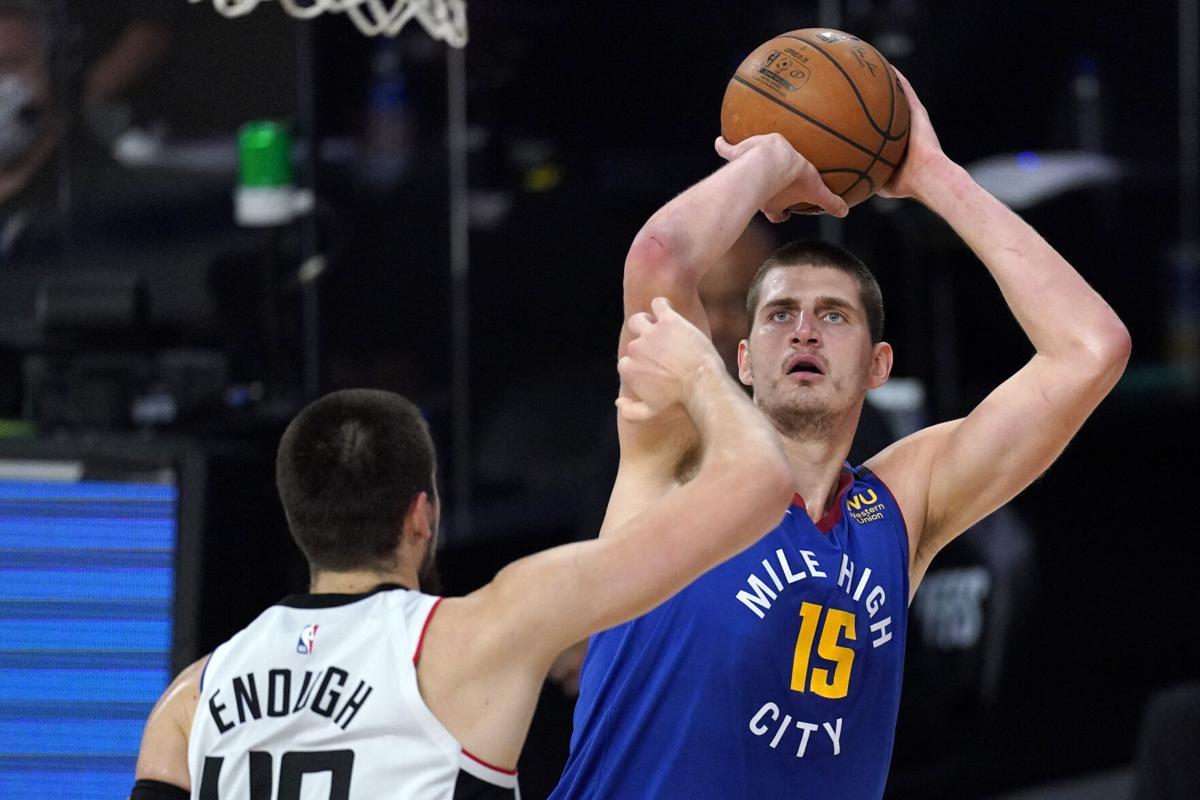 The Nuggets’ Nikola Jokic, right, goes up for a shot against the Clippers’ Ivica Zubac during the first half of their Western Conference semifinal playoff game Friday in Lake Buena Vista, Fla. 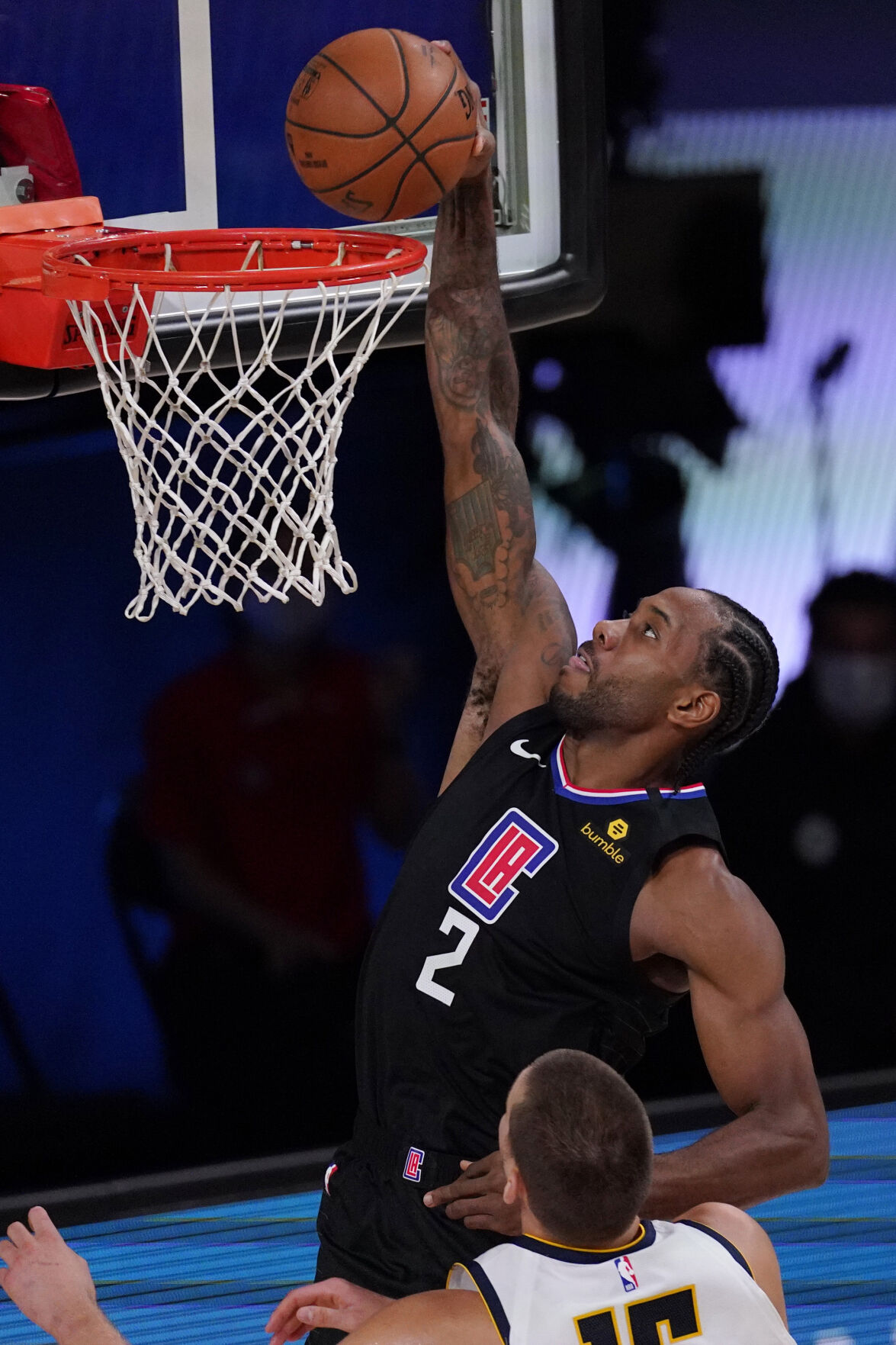 The Clippers’ Kawhi Leonard goes up for a dunk against the Nuggets in the first half of a Western Conference semifinal playoff game Sept. 3

The Nuggets’ Nikola Jokic, right, goes up for a shot against the Clippers’ Ivica Zubac during the first half of their Western Conference semifinal playoff game Friday in Lake Buena Vista, Fla.

The Clippers’ Kawhi Leonard goes up for a dunk against the Nuggets in the first half of a Western Conference semifinal playoff game Sept. 3

DENVER — It's the Sombor Shuffle, and all the cool kids are doing it.

You put one dribble down, you step one foot back. You do the Joker-Joker and shake the big, bad Clippers all about.

And while the NBA does everything but lay down a red carpet for a Lakers-Clippers series that’s made for Hollywood, the Nuggets are hell-bent on taking Mile High Basketball mainstream.

“We’ve enjoyed playing the role of spoiler. Hey, it’s all about the Boston Celtics, the Miami Heat, the Lakers and everybody can’t wait for the L.A. Western Conference Finals,” Nuggets coach Michael Malone said on Monday. “But there’s a little city in Colorado called Denver ...”

And there’s a big Game 7 Tuesday: Nuggets vs. Clippers, which could send Denver to a conference finals for only the second time in Paul Millsap's 35 years on earth. To reach this point the Nuggets had to go 5-0 in elimination games and become the first team to take four straight playoff series to a Game 7. They had to win consecutive games in which they trailed the Clippers by 16 points.

If there’s a single play that illustrates how the Nuggets have beaten back all odds to push the Clippers to the brink, it’s Joker’s unorthodox fadeaway. Like so many acts of genius, it came about from necessity. Colorado is not an NBA destination and built a contender through the draft — out of necessity. Jokic patented his go-to jumper the same way — out of necessity. As Jokic once told Adam Mares of DNVR.com, Joker invented the Sombor Shuffle after suffering an ankle injury.

“Shooting off his right (foot) like that allowed him to balance without putting pressure on his sore left foot,” Mares wrote.

The Sombor Shuffle is the kind of move you bust out when the neighbor kid stands 6-foot-10 and insists on 1-on-1 games in the driveway.

Is it on track to become one of the most unstoppable moves since the Dream Shake?

We’ll leave that to the NBA historians among us.

But the NBA bubble has revealed more about the Nuggets than advanced analytics or the eye test ever could. It revealed Bol Bol’s got next. It revealed much of the roster disrespected the process before the bubble, and rookie Michael Porter Jr. disrespected coach-player protocol by unloading on Malone's staff.

What it really revealed, though: for the rare time in Nuggets history, a front office has assembled a collection of talent that can run with the big boys. When you’re operating in NBA flyover country, that’s the hard part. By forcing a Game 7, they proved the hard part’s done.

To survive in this series, the Nuggets followed a blueprint that usually ends with an early exit: fall behind by double digits, exhibit the worst body language possible, pout at the officials.

“I was thinking a lot about it, and this is going to sound really funny: I almost feel like we’re the 'Bad News Bears',” Malone said.

Come to think of it, Malone would fare just fine cast as Walter Matthau’s Morris Buttermaker.

“I’ve just got to start carrying around a cooler of beer, Pabst Blue Ribbon,” Malone said.

Here’s a better idea: scrap the blueprint. If the Nuggets gift Kawhi Leonard and Paul George a 16-point lead in Game 7, they might as well board the charter flight back to DIA. But it won’t surprise loyal readers when I say the Nuggets have a star player who is Leonard’s equal.

Peep these digits from the playoff bubble:

The Nuggets will know they’ve made it when the spoiler role no longer fits. Beat L.A. in Game 7, and the Nuggets shuffle the NBA’s hierarchy.

You put one dribble down, you step one foot back ...

The Denver Nuggets, the youngest team left in the NBA’s Lake Buena Vista, Fla., bubble, forced a Game 7 in their conference semifinal series against the Los Angeles Clippers with a 111-98 comeback win Sunday. It was their second consecutive win featuring at least a 16-point deficit while facing elimination.