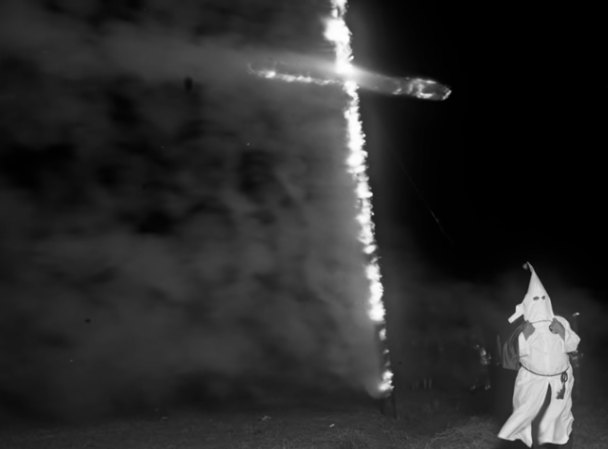 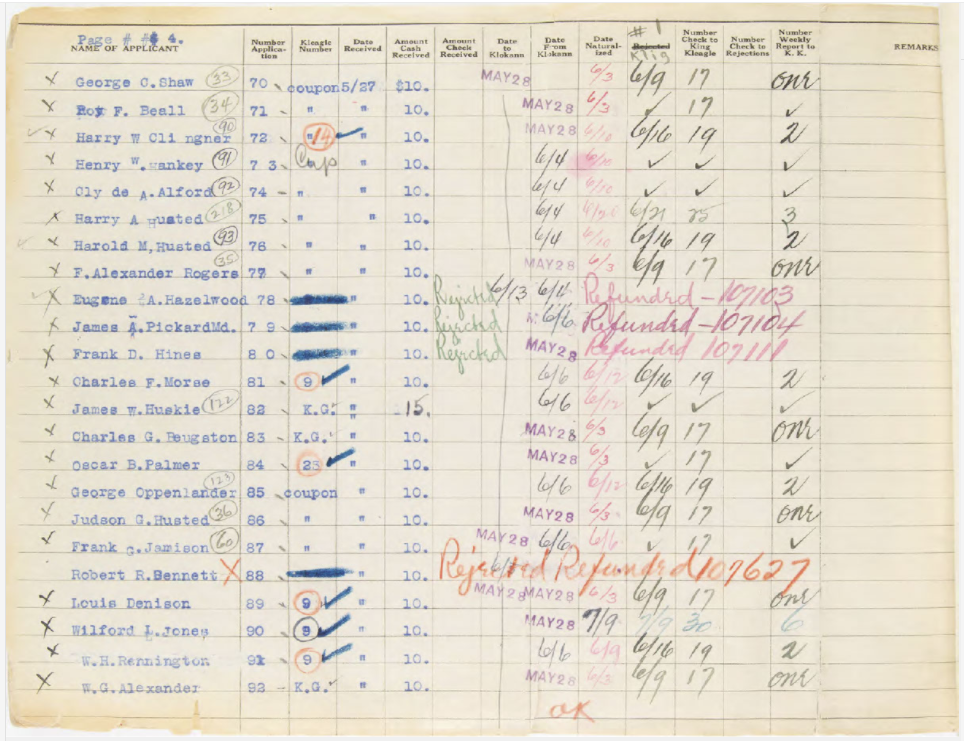 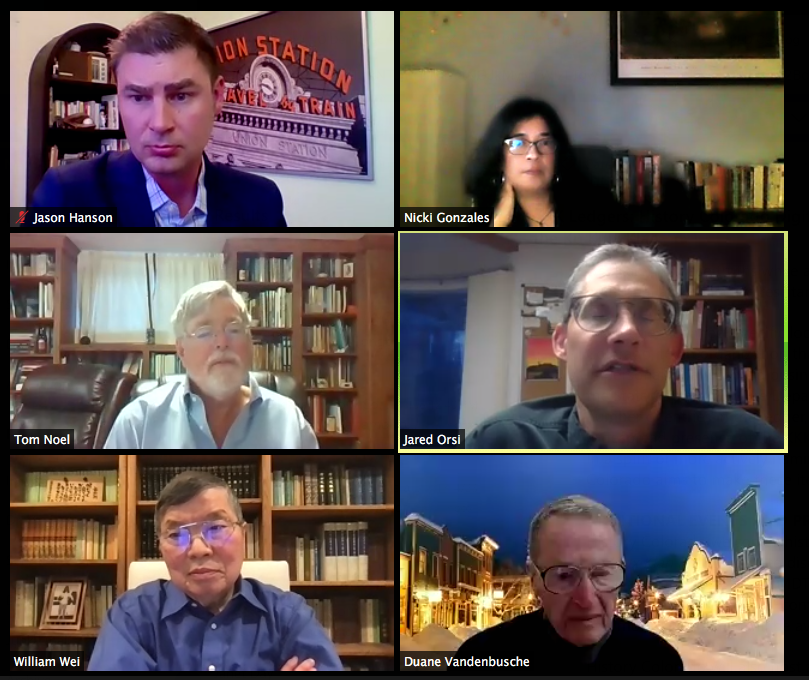 A century ago the Ku Klux Klan was a thriving entity in the state of Colorado. Tens of thousands of Coloradans swore their allegiance to the Klan in the 1920s, including prominent public officials like Denver’s then mayor and chief of police. According to History Colorado, the state’s preeminent historical society, Colorado had the nation’s 2nd-highest per capita Klan membership in the 1920s, with a chapter — or klavern — in each of its 64 counties.

History Colorado recently released a massive record of the Ku Klux Klan’s presence in Denver and other cities in the 1920s, when the white supremacist group was at the height of its power and influence.

The historical society has digitized 1,300 pages of Klan ledgers containing more than 30,000 entries — including names, addresses and other personal information about KKK members and affiliates in Denver and other areas in the state. The ledgers were made public in 1990, but were digitized just last year and made available online in 2021.

“This historic record demonstrates the pervasiveness of white supremacy in Colorado's history and impels us to examine how it persists today,” said Dawn DiPrince, History Colorado’s chief operating officer. “Working towards equity and justice requires that we examine these truths while also learning from the powerful Colorado stories of individual and collective resistance.”

Last Wednesday the History Colorado State Historian’s Council hosted an online roundtable discussion titled “Lifting the Hood: Denver’s KKK Ledgers.” More than 500 people attended the virtual conversation as six historians discussed the content of the ledgers, the breadth of the KKK’s reach in Colorado in the 1920s, and how one of the darkest periods of the state’s history continues to cast a shadow nearly 100 years later.

Panelist Jared Orsi, a history professor at Colorado State University, said the KKK of the 1920s was not the same group that was founded in the post-Civil War South in the late 19th century.

“(The Klan) is a periodic welling up of deep and dark waters in the American soul,” Orsi said. “In that darkness lurks a very narrow and excluding definition of who is an American, and a suspicion and fear — even a hatred — of anyone or anything that seems to lie beyond that definition.”

The Ku Klux Klan, Orsi explained, was originally founded in 1866 by Southerners who were opposed to post-Civil War Reconstruction. The group disbanded in the 1870s, but experienced a rebirth in 1915 after D.W. Griffith’s film “Birth of a Nation,” which portrayed the Klansmen as heroes.

The second Klan incarnation spread beyond its oppression of Black people to include atheists, Catholics, Jews and nearly everyone who wasn’t white and protestant. Where the first Klan was almost exclusively a Southern confederacy, the reborn KKK was a national phenomenon that touched many American cities, including Denver.

Tom Noel, who specializes in the history of the Rocky Mountain West, said some people joined the Klan for more nuanced reasons than race- or religion-based hatred.

“Many people joined because they thought this was a way to restore law and order,” Noel said, adding that certain churches encouraged membership. “Klansmen would come into churches regularly, interrupt a service — with the permission of the preacher — and recruit members.”

Some people were pressured to join by their employers, Noel said.

“If your employer was a devout ‘Kluxer,’ you might have to sign up in order to keep your job,” he said.

Nicki Gonzales, an associate history professor at Regis University, said Klan membership also expanded when certain whites became uneasy with the growing number of immigrants entering the country. More than 23 million immigrants came to the U.S.  between 1880 and 1920, she said.

“They came into the country to find work in industries like steel, mining, railroads, smelting and agriculture,” Gonzales said. “Here in Colorado, we had all of those.”

Many of the immigrants were Catholic and Jewish, which didn’t always sit well with white protestants in the state, Gonzales said. The KKK message of racial and religious purity appealed to some of these residents.

Duane Vandenbusche, a history professor at Western Colorado University, said that as the KKK’s numbers grew, so did their power and influence. Klan members began to infiltrate state and city government, school boards, police departments and other centers of leadership.

“It was very big out here in Western Colorado in places like Grand Junction, Durango, Montrose and Gunnison,” Vandenbusche said.

Orsi said the Klan didn’t take root as deeply in Colorado Springs as in other cities, partly because there were very few non-white people in the city in the 1920s. Because the majority of Colorado Springs was white and Protestant, there were few targets for the Klan’s hatred, and recruitment efforts quickly fizzled out.

“The Klan in Colorado in the 1920s was an organization that was designed to exploit divisions in the populace in order to gain political and economic power,” Orsi said. The fewer divisions there were, the less effective the Klan was, he explained.

In Pueblo, where there was a growing Hispanic community, certain white people were more receptive to the Klan’s xenophobic ideology, Orsi said.

“The Klan’s racist argument about the ‘threat’ of the Hispanic community was a claim that white folks in Pueblo could understand and respond to,” he said. “In Colorado Springs, however, which was much more racially and religiously homogeneous, it wasn’t a credible claim … so the Klan had a lot less success there.”

Vandenbusche said journalists and newspaper editors began investigating and exposing some of the Klan’s illegal activities, including liquor sales during Prohibition. The stories attracted the attention of the Internal Revenue Service and ultimately helped lead to the downfall of the KKK in Colorado.

“They got a lot of the members of the Klan the same way they got Al Capone — on income tax evasion — and sent them to prison,” Vandenbusche said.

Former state historian William Wei said that while the KKK no longer exists in its 1920s form, its shadow continues to hang over the American consciousness and occasionally shows itself in certain kinds of political rhetoric. Politicians whose platforms promise a return to the “good old days” or “old-fashioned values” are often taking their strategy right out of the Klan’s old playbook, Wei said.

“The kind of xenophobia that existed in the past continues right up to the present, and people have seized upon that with fair regularity,” said Wei, a professor at the University of Colorado in Boulder. “The names may have changed, but the attitudes are in many ways the same.”

Wei added that the recent spate of anti-Asian violence — a nearly 150% increase in the past year — can also trace its roots back to the anti-immigrant ideology of the 1920s Klan.

“We believe that we will never learn from the past — especially a past that has been intentionally kept in the dark — unless we bring it into the light and confront it,” Hanson said. “We hope that this does play a positive role in shaping a better Colorado going forward.”