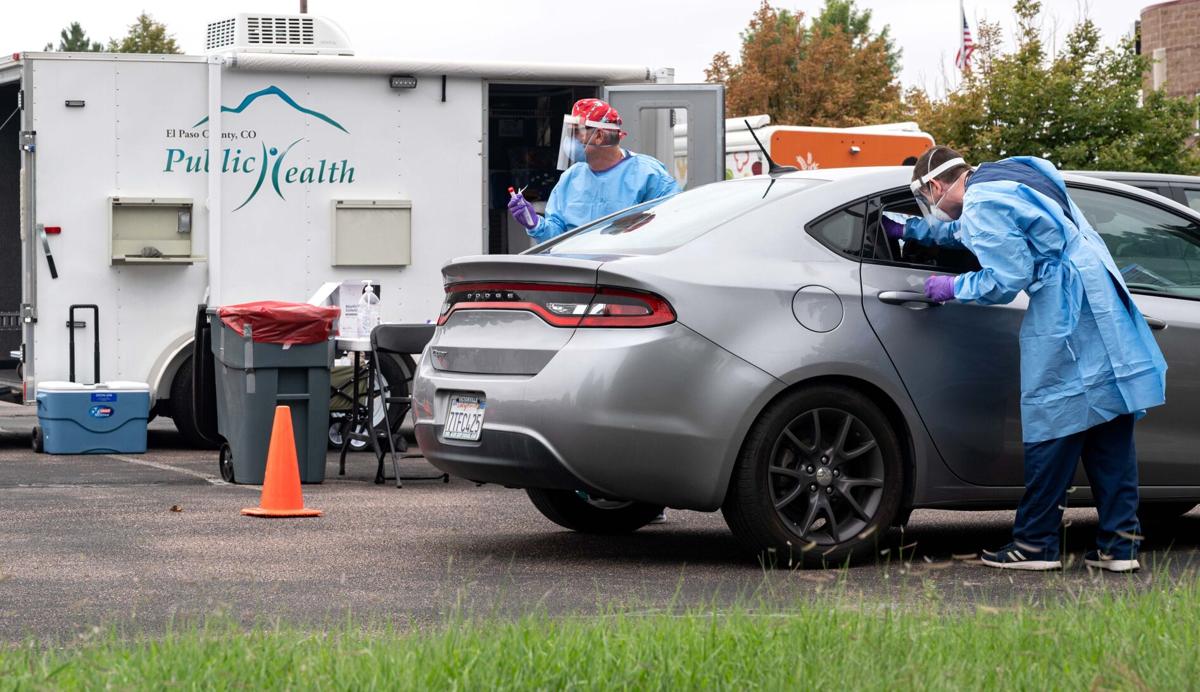 Rajko Anic, left, and Aaron Hueser with El Paso County Public Health test patients for COVID-19 at a drive-up testing site Monday, Aug. 3, 2020, during the weekly food distribution center outside the Southeast Armed Services YMCA in Colorado Springs. The site was set up to reach more Hispanics, including undocumented members in the community. (The Gazette, Christian Murdock) 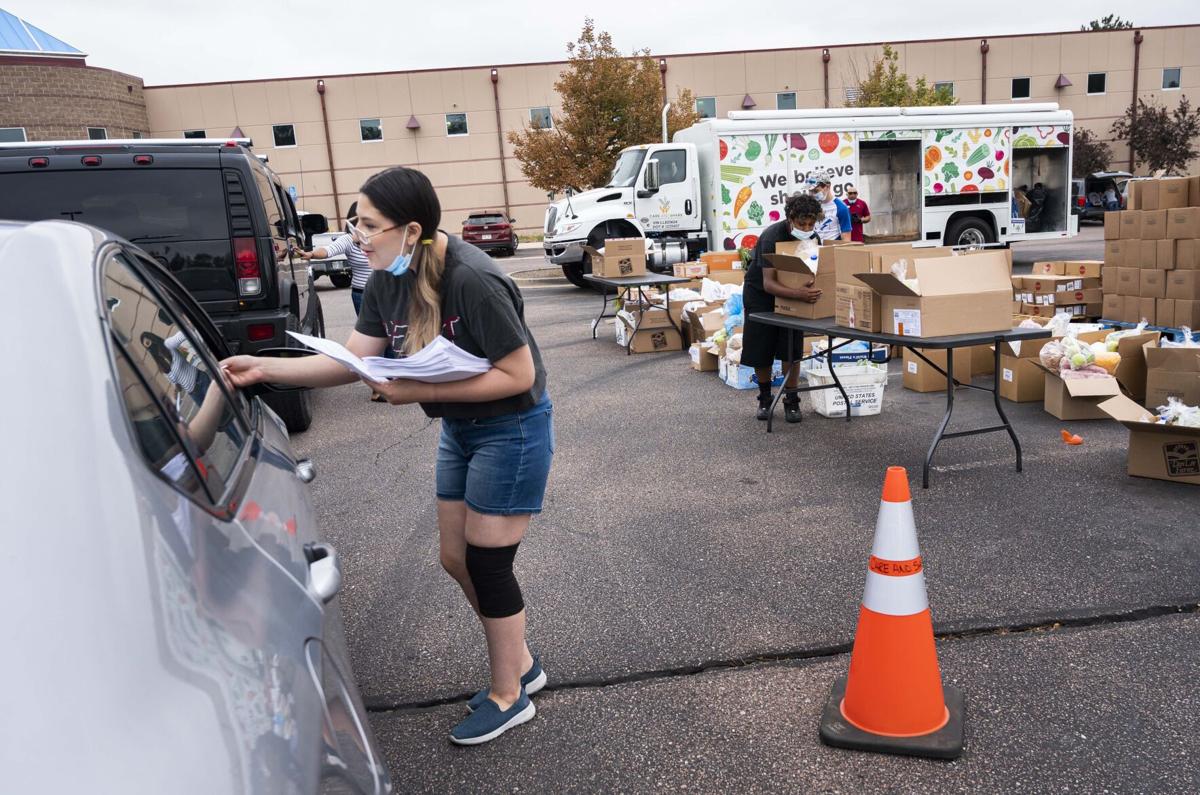 Volunteer Thaenna Perez hands out literature in Spanish on COVID-19 testing this month at the weekly food bank outside the Southeast Armed Services YMCA in Colorado Springs. 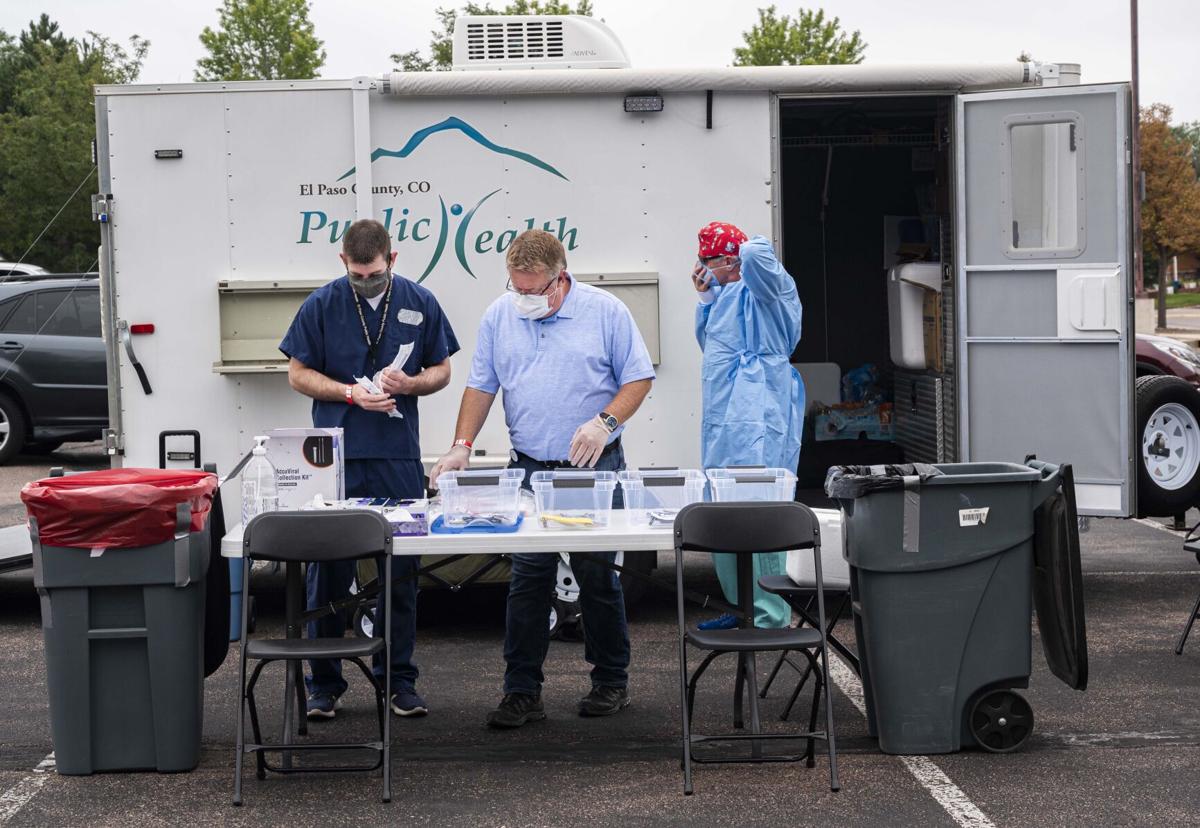 Rajko Anic, left, and Aaron Hueser with El Paso County Public Health test patients for COVID-19 at a drive-up testing site Monday, Aug. 3, 2020, during the weekly food distribution center outside the Southeast Armed Services YMCA in Colorado Springs. The site was set up to reach more Hispanics, including undocumented members in the community. (The Gazette, Christian Murdock)

Volunteer Thaenna Perez hands out literature in Spanish on COVID-19 testing this month at the weekly food bank outside the Southeast Armed Services YMCA in Colorado Springs.

COVID-19 continues to affect Hispanics at a disproportionately higher rate than other ethnic groups in El Paso County and statewide, a reflection of their vulnerability because of their jobs and unequal access to health care, advocates say.

While Hispanics make up about 20% of the county's population, they account for about 30% of local COVID cases, she said.

Statewide, of the nearly 49,500 people who have tested positive for the virus, 38% are Hispanic, according to Colorado Department of Public Health and Environment statistics. Hispanics comprise 22% of Colorado’s 5.7 million residents.

One reason for the disparity could be that many Hispanics are front-line workers who may not have health insurance or access to health care, said Julissa Soto, director of statewide programs for Servicios de la Raza, or Services for the People.

“There is much health inequity,” she said. “We must meet people where they are at, where they live and play, where everything seems familiar to them.”

Since April, her organization has run a free weekly food giveaway at the Southeast YMCA for undocumented and other low-income residents. The program started with 25 families showing up and has grown to serve 500 families weekly.

About half of those who use the testing site each week receive positive results, she said. Normally, between 15 and 20 people are being tested each week, Soto said.

Cars start lining up in the YMCA parking lot and spilling over onto South Chelton Road at 10:30 a.m. each Monday for the food distribution and testing that begin at noon.

Some queued up to be tested this past week were worried they had contracted the virus. Others said they possibly had been exposed.

Susana Carreno's 21-year-old daughter had lost her sense of taste and smell. Carreno said through a translator that she went to other clinics but was told she needed an appointment.

At the Servicios de la Raza site, no appointment is necessary and the test is free, Soto said.

Carreno’s daughter had self-quarantined in her room so as to not spread the virus to her other five children. But the family was concerned because the daughter and her husband are the only ones with jobs.

“She needs a negative test to go back to work at a cellphone retail center,” said Cindy Marroquin, program manager for Servicios de la Raza, who translated.

Carreno said her family is on the verge of homelessness because their landlord wants to evict them.

“She has a lot of stress,” Marroquin said. “This pandemic is crazy, a very stressful time.”

Teenagers and young adults have been lax with social distancing rules and covering their faces, Carreno said.

A worker at Andrea Quiroz’s job in a fruit and vegetable packing plant in Colorado Springs tested positive for COVID, so now all employees have to be tested.

The issue has affected her family of three tremendously, she said through as Marroquin.

“They have very little work. They pretty much only have money for rent.”

Quiroz’s employer shut down operations and told workers not to return until the business could figure out who is infected and who’s not.

Quiroz said she didn’t have any symptoms as she waited patiently in line to be tested.

As to why Hispanics have higher infection rates, Quiroz said undocumented people without proper paperwork to be in the United States aren’t receiving unemployment benefits or federal stimulus money.

Some people just don’t care about the pandemic and the regulations, said Catalina Cholico. Her 13-year-old daughter was tested at the bilingual site a few weeks ago and received a negative result despite having some of the symptoms.

“We’re not taking the right measures we should be taking as a (Hispanic) community,” she said. “We’re in crowded places, around a lot of people, and not wearing masks like we should.”

Cholico’s five-member family took precautions before hearing the outcome of the daughter’s test because they were worried, she said.

The daughter was quarantined in her room for more than a week.

“She went from her room to the bathroom, and that was it,” Cholico said through Marroquin. “She was nervous about the test.”

Spanish-speaking volunteers ask every driver whether anyone in the car has symptoms or needs to be tested. Results are returned in a about a week, Marroquin said.

Access to information about the disease might be another reason Hispanics and Latinos are contracting COVID at a higher rate, Marroquin said.

“There’s a lot of information, and I don’t know if it’s readily available in Spanish,” she said, adding that the information sheets should help.

“People are afraid to get tested or go to the doctor, and some don’t have papers, so they fear ICE (Immigration and Customs Enforcement) looking for them.”

Servicios de la Raza will re-evaluate its ability to continue both the food distribution and the testing after Aug. 17, Soto said.

Kenia Uparela said through Marroquin that she was grateful for the assistance during “these hard times.”

She and her family relocated to Colorado Springs from Belgium just as the pandemic was taking hold and has been unable to find a job or child care. Her husband is working, and the family is relying on savings to get by.

“We’re the ones doing the hard jobs, the cleaning, the agriculture,” Uparela said of Hispanics. “This kind of help is necessary now and after the pandemic ends.”

Since deaths due to the novel coronavirus began being tabulated, an unusually high number of deaths that weren’t classified as COVID-19 deaths…