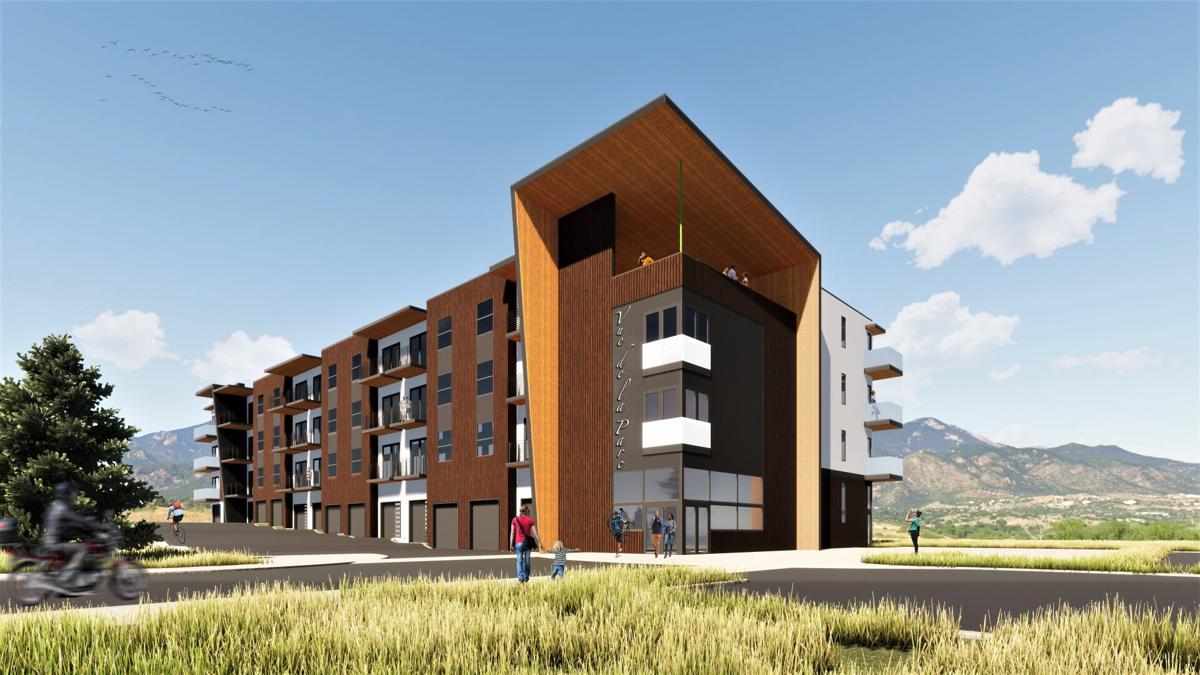 A four-story, 53-unit apartment building, to be called Vue De La Parc, has been proposed for Colorado Springs’ west side, southwest of 8th Street and Motor City Drive. The project would be developed on 1.7 acres adjacent to Bear Creek Regional Park.

The four-story, 53-unit Vue De La Parc apartment building would be built southwest of 8th Street and Motor City Drive on Colorado Springs’ west side. The project, with balconies, a dog run and barbecue areas, would be developed on a vacant 1.7-acre parcel that backs up to Bear Creek Regional Park.

A four-story, 53-unit apartment building would be developed next to Bear Creek Regional Park on Colorado Springs’ west side, a project that would buck the trend of large, suburban complexes in fast-growing parts of town.

Viceroy Development of Colorado Springs plans the upscale Vue De La Parc Apartments for 1.7 acres on the west side of South 8th Street, about one-quarter mile south of Motor City Drive, according to a proposal submitted to city officials.

Many apartment complexes of several hundred units have been built or proposed in areas such as InterQuest and Polaris Pointe in northern Colorado Springs or along Powers Boulevard, Woodmen Road and other northeast side growth corridors.

Apartment rents in Colorado Springs soar to another record high

The multiple-building projects boast pools, clubhouses, fitness centers and other trendy amenities to entice renters, and typically are developed on sprawling 12- to 15-acre sites.

It will have barbecue pits, a dog run, a combination of surface parking and private garages and a community balcony that will serve as a gathering spot for tenants, he said. Some west-facing penthouse units also will have floor plans and balconies that are larger than other apartments.

But his project’s biggest amenity will be its location, Long said.

The project’s site backs up to scenic Bear Creek Regional Park, will be five minutes from downtown and a short drive from U.S. 24, which provides a westward link to Ute Pass and the mountains, he said.

“You’ll have views of both the park and the mountains on one side and the city on the other,” Long said. “I think it’s a great spot for apartment residences.”

The building’s exterior has been designed by Echo Architecture in Colorado Springs with a mix of natural wood, weathered steel siding and stucco that blend in with Bear Creek Regional Park and nearby commercial uses, according to the proposal submitted to city officials.

The area’s zoning would allow for a 45-foot tall building; Long’s group is seeking city permission to exceed that limit by 1.8 feet.

Although rents haven’t been set, apartments will lease at market rates, Long said. Colorado Springs rents averaged nearly $1,334 a month in the first quarter, according to a report from the University of Denver’s College of Business and a Denver economic research firm.

Long’s company is supposed to complete the site’s purchase by year’s end. In a best-case scenario, construction would start next year and the apartments would open in 2023, he said.

Long said he suspects the site had been envisioned for commercial uses, such as office or retail. But few office projects are being planned because so many employees have worked remotely from home during the COVID-19 pandemic and retail probably isn’t a fit, he said.

Instead, he believes his project will appeal to renters in an underserved part of town where few apartments have been built in recent years and at a time when many people want the advantages of multifamily living, such as a maintenance-free lifestyle.

“It’s too big for a lot of smaller builders and it’s too small for many big apartment developers,” Long said of the site. “They want to do those 250-unit, amenity laden complexes that are right off InterQuest or Powers or you name it. This absolutely wouldn’t fit their profile at all. Hopefully it’s a niche I can make work.”

Long received approval this year for a 72-unit apartment project at Lower Gold Camp Road and West Moreno Avenue, also on the west side. He hopes to begin construction on that project this summer.

Surging housing costs pushed the cost of living in Colorado Springs to a record 106.8% of the national average (6.8% above the average) in the…