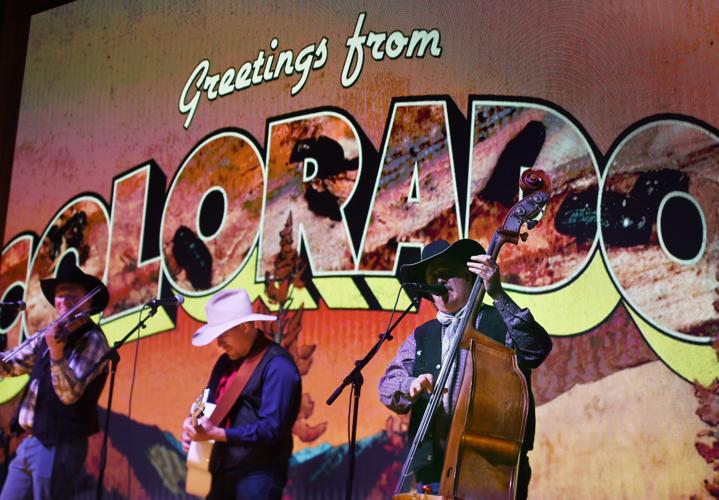 The Flying W Wranglers perform for visitors at the ranch on Monday. 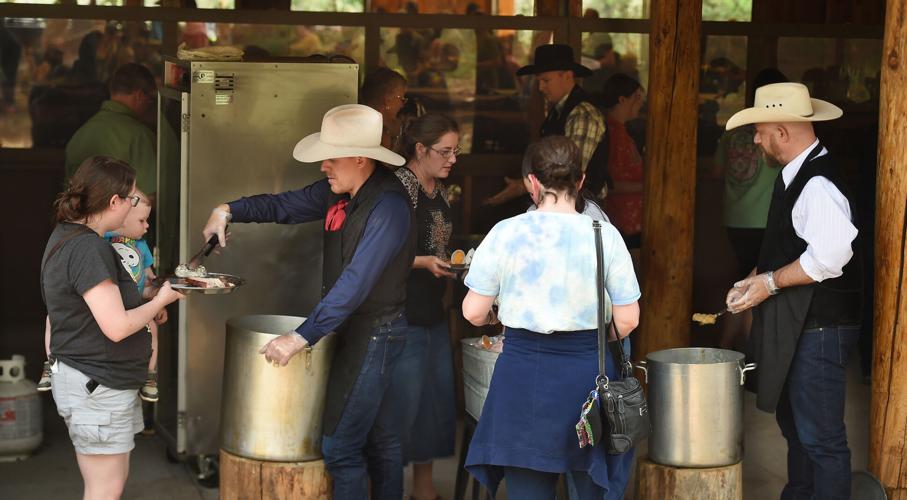 Employees at the Flying W Ranch have kept the serving chuckwagon-style meals in the newly rebuilt ranch. 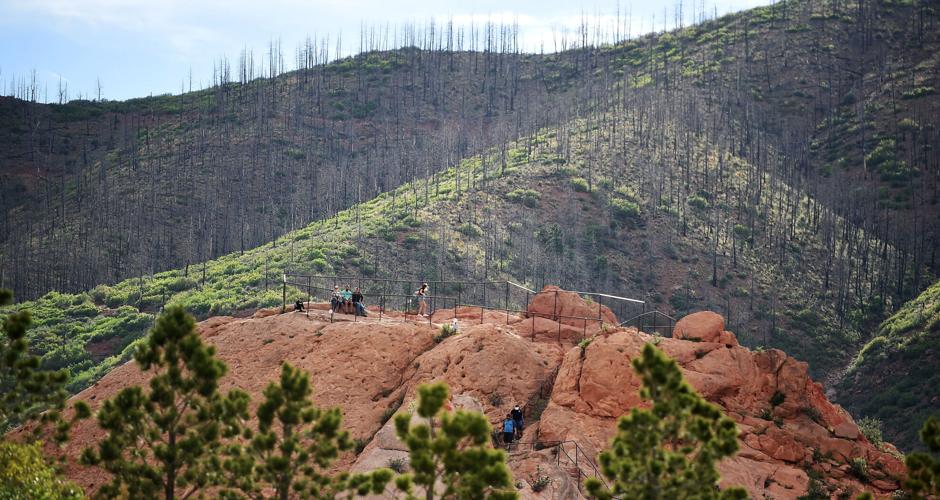 Visitors to the Flying W Ranch can climb to the top of one of the rock formations and look out over the ranch and the new growth coming through the burned trees from the Waldo Canyon fire 10 years ago. 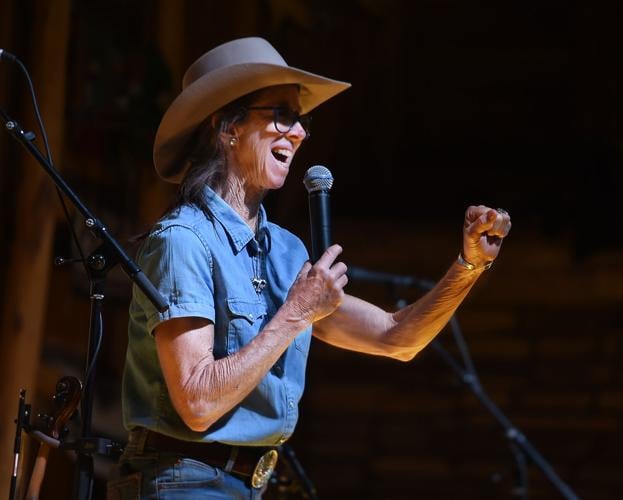 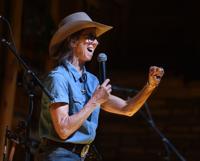 Leigh Ann Wolfe, owner of the Flying W Ranch, addresses the crowd every night to talk about how they rose from the ashes of the Waldo Canyon fire. 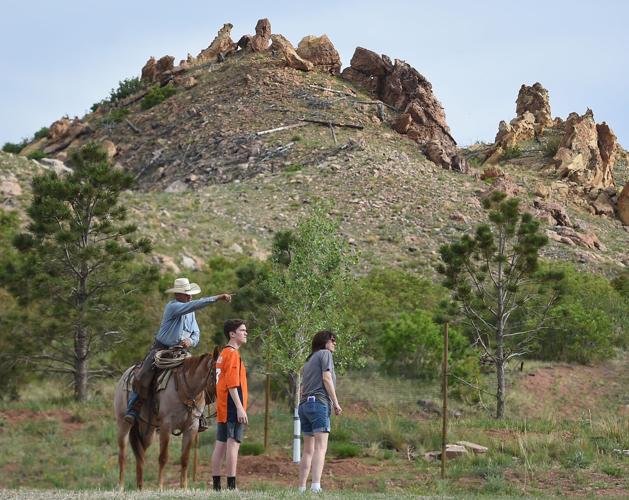 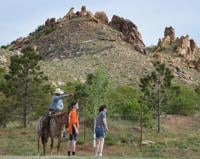 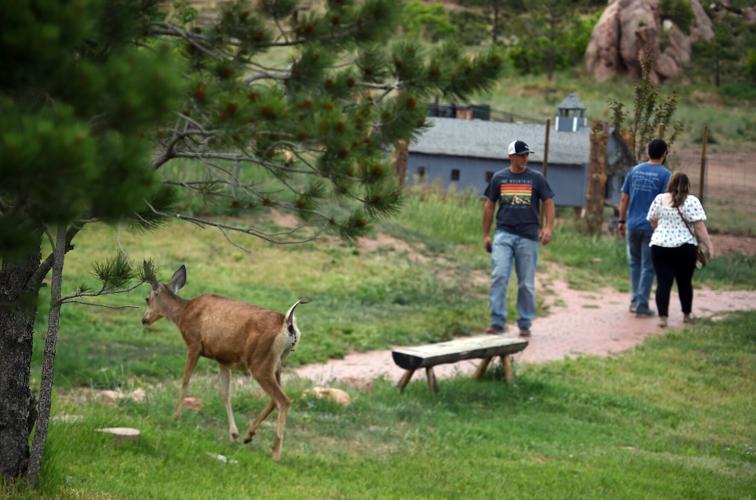 Visitors roam the grounds of the Flying W Ranch and might see a few wild or domesticated animals. 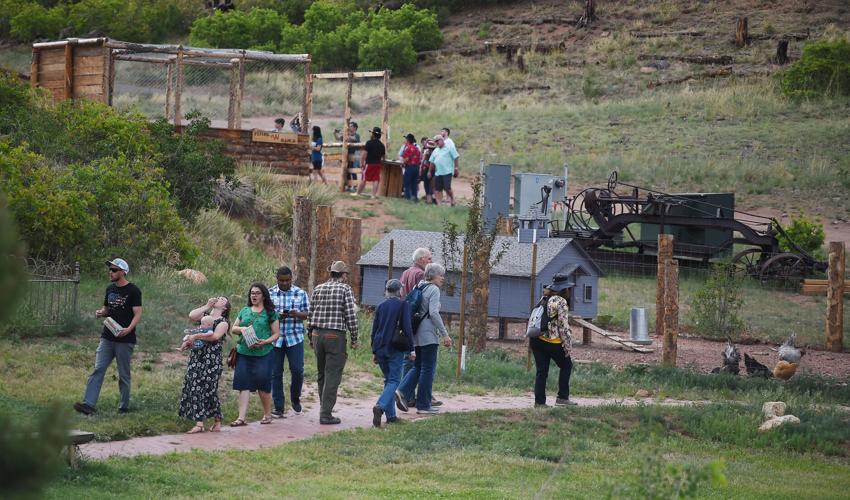 Visitors roam around the grounds of the Flying W Ranch. 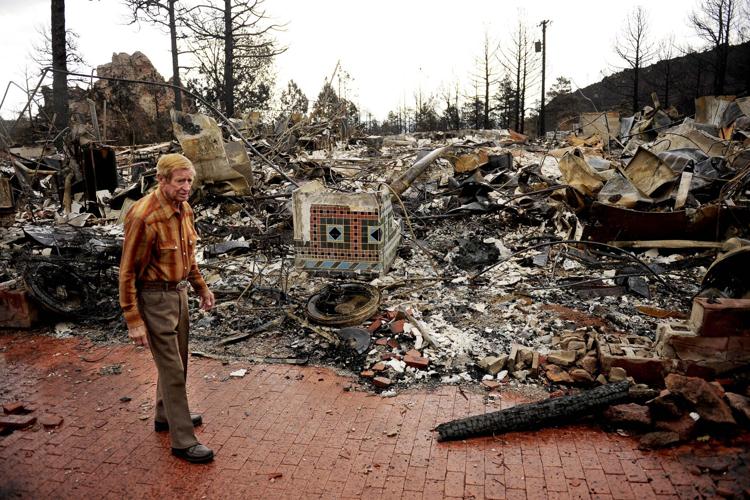 Photo by Susannah Kay, The Gazette 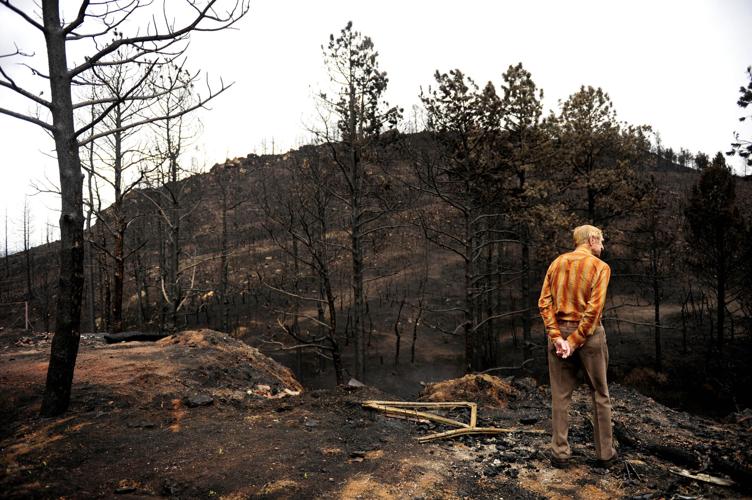 Russ Wolfe surveys the remains of the Flying W Ranch as a result of the Waldo Canyon Fire on Monday, July 9, 2012. Photo by Susannah Kay, The Gazette

The Flying W Wranglers perform for visitors at the ranch on Monday.

Visitors roam the grounds of the Flying W Ranch and might see a few wild or domesticated animals.

Visitors roam around the grounds of the Flying W Ranch.

Russ Wolfe surveys the remains of the Flying W Ranch as a result of the Waldo Canyon Fire on Monday, July 9, 2012. Photo by Susannah Kay, The Gazette

Six days a week, the Flying W Ranch offers a window to the Old West.

Located on Chuckwagon Road near the foothills of Pikes Peak, the ranch boasts a throwback to frontier days, with its cowboys, blacksmiths, cows, goats and oxen. Visitors can practice archery — shooting arrows into massive hay bales — or, if they’re feeling adventurous, they can try their hand at ax-throwing. After a chuckwagon-style dinner of brisket, sausage and baked beans, guests are treated to a serenade from a Western (not country) music band called the Flying W Wranglers.

In this bucolic, Western-style setting, there are few hints that 10 years ago, the Waldo Canyon fire reduced the ranch to ashes along with scorching more than 18,000 acres and destroying nearly 350 homes.

The blaze ignited west of Colorado Springs on June 22, 2012, triggered evacuations the next day and reached the ranch on the 26th — demolishing nearly 30 buildings on the property as well as multiple authentic Old West artifacts.

“For a while, it didn’t look like we would ever come back from it,” said owner Leigh Ann Wolfe. “But I had to try.”

It took eight years of painstaking labor, but the ranch is back now, and in some ways it’s better than the old place, she said.

“One silver lining is that now you can see the rocks very clearly,” said Wolfe, who took over operations after her father, Russ, died in 2019. “There used to be massive trees in front of all those rocks. Now, the view is more like Garden of the Gods.”

“There’s more to do now than there was pre-fire,” Wolfe said. “We’ve got ax-throwing, we’ve got cowboys running around, and we’ve got the American Milking Devons — a highly endangered species of oxen. And the eating area is a big improvement over the old place.”

Wolfe prefers not to elaborate on the blaze and its immediate aftermath. The emotions, even 10 years later, are still too raw.

But the impact of the fire, on the ranch and on the city, was too great to ignore entirely. So in acknowledgment of the event, the ranch has put together a brief video, which shows the charred, smoldering remains of the original ranch as a visual reminder of how far it has come.

Wayne Humphrey, a member of the Wranglers, still remembers where he was when he heard the ranch was in danger.

“(The band was) at a recording studio working on a new CD when I got the call from Terry Wolfe, Leigh Ann’s sister, saying the fire was coming down the hill and the Flying W wasn’t gonna make it,” said Humphrey, the sole remaining member of the pre-Waldo band.

“Everyone was trying to get out of here, so we couldn’t really go anywhere. So we just stood down on the corner of Centennial and Garden of the Gods and watched the fire come down the hill.”

When Humphrey and a few staff members were allowed to return to the ranch two days later, the place was a smoking ruin, he said.

“There were still firemen here, and you could still smell the smoke, but they let us walk through the village, and it was devastated. There was nothing — just ashes everywhere.”

Marian’s Cooking Library (named for Wolfe’s mother), a small building tucked beneath a rock structure, was virtually untouched by the fire. A small chapel, called the Church on the Ranch, was wiped out, but a large wooden cross was spared. It’s blackened and debilitated, but the cross remains standing to this day.

“In that area, there was nothing but black, flat ash — and that wooden cross,” Wolfe said. "There is no doubt in my mind that God has His hands on this place.”

Ranch hand John Hendrix returned to the destroyed ranch two days later and found about 45 head of cattle, all of which had survived the fire.

Some cattle suffered minor burns, but one cow — which turned out to be pregnant — could barely stand for weeks, and her udders had been scorched, and couldn't feed her newborn.

Hendrix and his wife, Candy, hand-fed the calf — named Waldo — for four months. Waldo flourished in the family’s loving care, and he grew. And grew, until he was finally too big to keep at the house. When they took him to the Wolfe family ranch, he tipped the scales at 400 pounds, they said.

“He eventually grew into a 2,000-pound menace,” Wolfe said, laughing.

Waldo died two years ago, but he still has an undeniable presence at the ranch. Most of their calves are “Waldo’s babies,” according to Hendrix. And the bull is mounted on a wall next to the stage where the Wranglers perform six nights a week. As the son of a Waldo Canyon fire survivor, he’s a visual testament to the resiliency it took to rebuild.

The ranch reopened in July 2020 and was faced with another unforeseen challenge.

“We had finally gotten back on our feet, and COVID hit, and almost everything in the town shut down,” Wolfe said. “It really took a toll on us.”

“We rose from the ashes,” Humphrey said. “It took a lot of doing, but we’re back, and the city needed this. Those eight years we were closed, there was a hole here. This is a staple in Colorado Springs.”

“Every night we have people coming up to us in tears, telling us what this place means to them,” Wolfe said.

Jonni McCoy and her daughter, Jessica, stood on their driveway and looked at the flattened mess of twisted metal and crumbling brick that used…

Colorado's state sport? Burro racing. Here's where you can catch the races this summer

It’s not baseball. Not football. Not hockey. Not basketball, cycling, golf or pickleball (though that last one sure is getting popular). It’s not even mountain climbing.