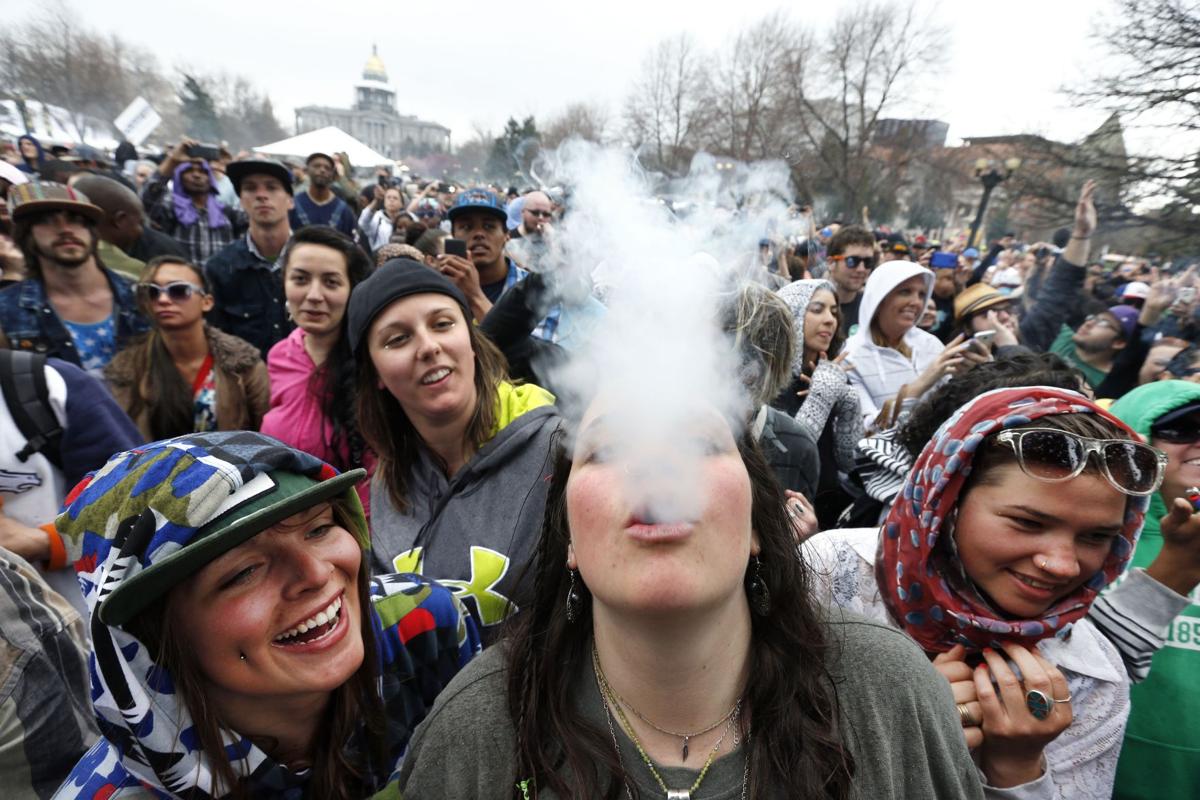 With the Colorado state capitol building visible in the background, partygoers dance and smoke pot on the first of two days at the annual 4/20 marijuana festival in Denver, Saturday April 19, 2014. The annual event is the first 420 marijuana celebration since retail marijuana stores began selling in January 2014. (AP Photo/Brennan Linsley) 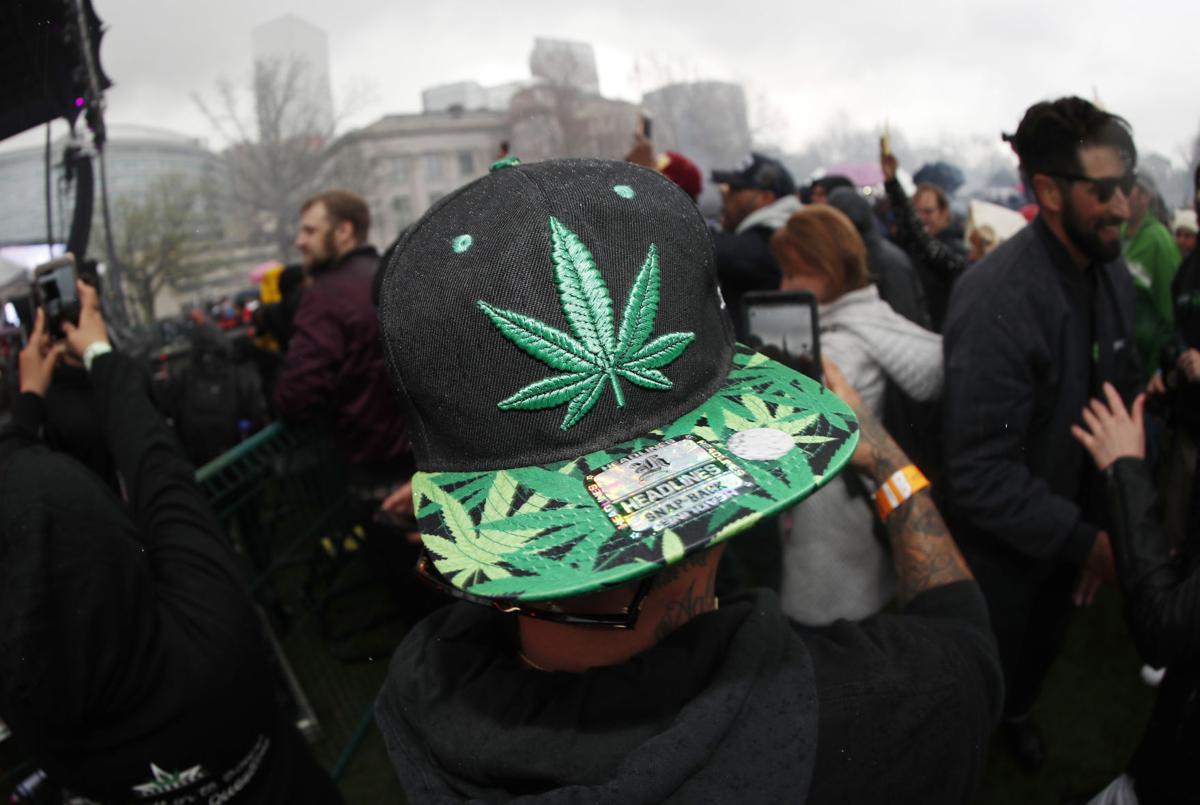 In this April 20, 2018 file photo, an attendee celebrates at 4:20 p.m. by lighting up marijuana during the Mile High 420 Festival in Denver. (AP Photo/David Zalubowski, File)

With the Colorado state capitol building visible in the background, partygoers dance and smoke pot on the first of two days at the annual 4/20 marijuana festival in Denver, Saturday April 19, 2014. The annual event is the first 420 marijuana celebration since retail marijuana stores began selling in January 2014. (AP Photo/Brennan Linsley)

In this April 20, 2018 file photo, an attendee celebrates at 4:20 p.m. by lighting up marijuana during the Mile High 420 Festival in Denver. (AP Photo/David Zalubowski, File)

It was only a matter of time before Big Marijuana’s pot peddlers would recast themselves as Colorado’s justice warriors. And it didn’t take much effort for an industry with mountains of money and no scruples.

It can afford the well-oiled, shape-shifting, myth-making machinery of a prolific propaganda mill. It can pay minions and hired guns to posture for politicians and pal around with the press — all the while giving a knowing, cynical wink to the industry’s customer base.

Of course, it doesn’t hurt to have a state and local political establishment that is so oddly enamored of legalized recreational marijuana as to proudly play its patsy.

The latest example is the Denver City Council’s unanimous vote this week to allow marijuana delivery and hospitality businesses — i.e., smoking / dabbing lounges — to open this year. Neighboring Aurora beat Denver by a few months; it approved pot delivery and hospitality businesses in December. (As a reminder not all elected policymakers on the Front Range have gone to pot, the Colorado Springs City Council — which has yet to allow even retail storefront sales of marijuana — nixed the idea of deliveries in September.)

This new wave of pot liberalization comes with a whole new premise — distinct from the original case for legalization when it passed on the statewide ballot in 2012.

Back then, it was about “keeping kids out of jail,” though in truth not many were winding up there for mere use. It also was, unabashedly, about creating a cash cow for government coffers. Amendment 64 did indeed accomplish both those things.

This time, however, pliant pols are doing the industry’s bidding by sanctimoniously rolling their pot in the wrapper of “social equity.” Yes, social equity, that abracadabra-like catchall that has crept into just about every policy debate lately — and that has been used as the rationale for just about any action, however ludicrous.

Social equity in this case means giving preferences for pot hospitality, delivery and other retail licenses to people who, among other considerations, have a criminal history involving marijuana.

You read that right. The upside-down thinking here is that such “victims” were unduly punished for actions that are now legal. So, this is how the Denver City Council among other lawmaking bodies is going to make things right.

Or, to put it another way: The marijuana trade didn’t make enough of a shambles of their lives the first time around, so let’s give it another try.

Here’s Eric Escudero, the spokesman for Denver’s Department of Excise and Licenses, as quoted by The Gazette: “We’re really pleased to see this City Council vote … They demonstrated with their vote tonight that they support social equity and making sure all Denverites can benefit from this multibillion-dollar industry.”

Drug money for everyone! It’s self-parody worthy of “South Park.”

That’s not the only backward logic in the new policy. As if the social-equity eyewash weren’t enough of a cover for letting local government further line Big Marijuana’s pockets, City Hall also decided to let weed be smoked indoors.

A generation after Colorado’s General Assembly banned indoor smoking statewide in most places open to the public, pot’s pull on politicians is so great, they are walking back their concern for public health, too. That part of the policy has brought out advocates for health and clean air in force.

Groups that led the battle against Big Tobacco have spoken out. The American Lung Association and GASP, among others, have weighed in with opposition on these opinion pages in recent weeks. Char Day with Americans for Nonsmokers Rights spoke to the council against the hospitality businesses that are allowed in this policy leap. Her point: Employees as well as patrons of the hospitality businesses will be endangered by prolonged exposure to the acrid, carcinogenic clouds of marijuana smoke.

“Given the current public health concerns and the spread of COVID-19 … we strongly suggest maintaining 100% smoke-free environments to protect workers’ and citizens’ lung health,” Day said. It was to no avail.

Besides, that was before, you know — social equity.

Also known as smoke and mirrors.

It’s all a recipe for even more of an economic meltdown — on the heels of COVID’s economic crunch. All because the party in power in Colorado seems to think businesses have bottomless pockets.