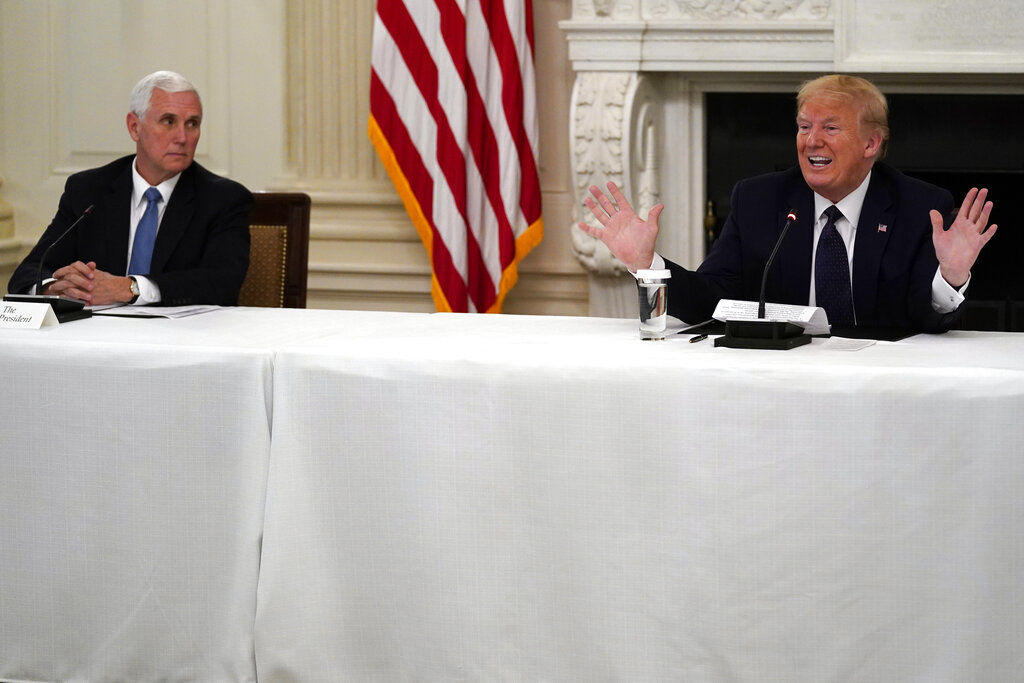 President Trump told reporters in May that he was taking zinc and hydroxychloroquine during a meeting with restaurant industry executives about the coronavirus response Monday in the White House. Vice President Mike Pence listens. 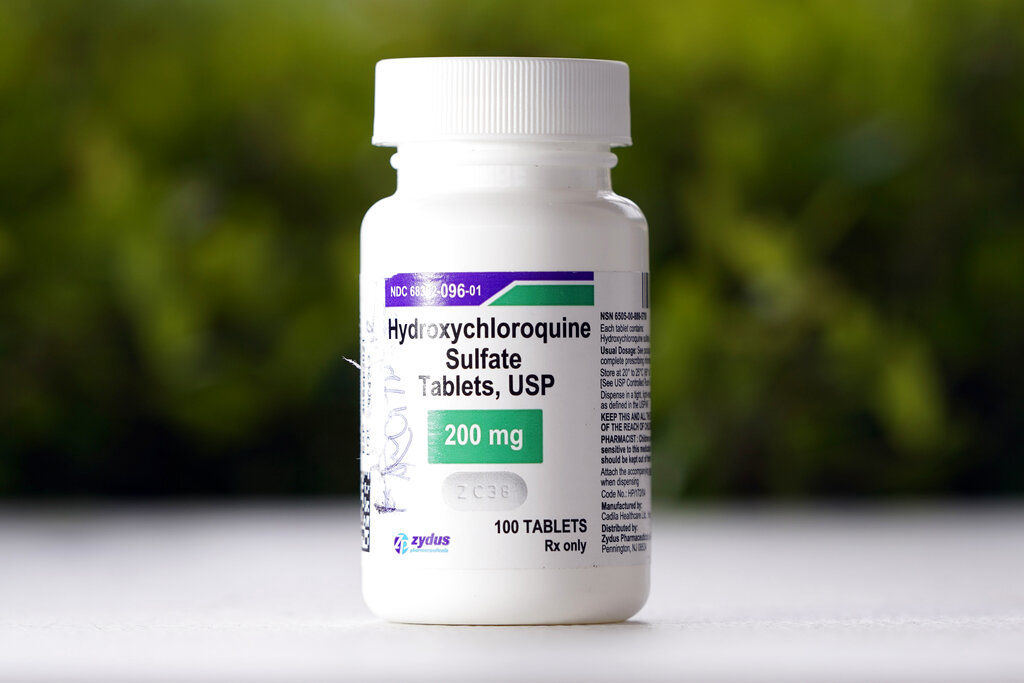 A bottle of hydroxychloroquine tablets. 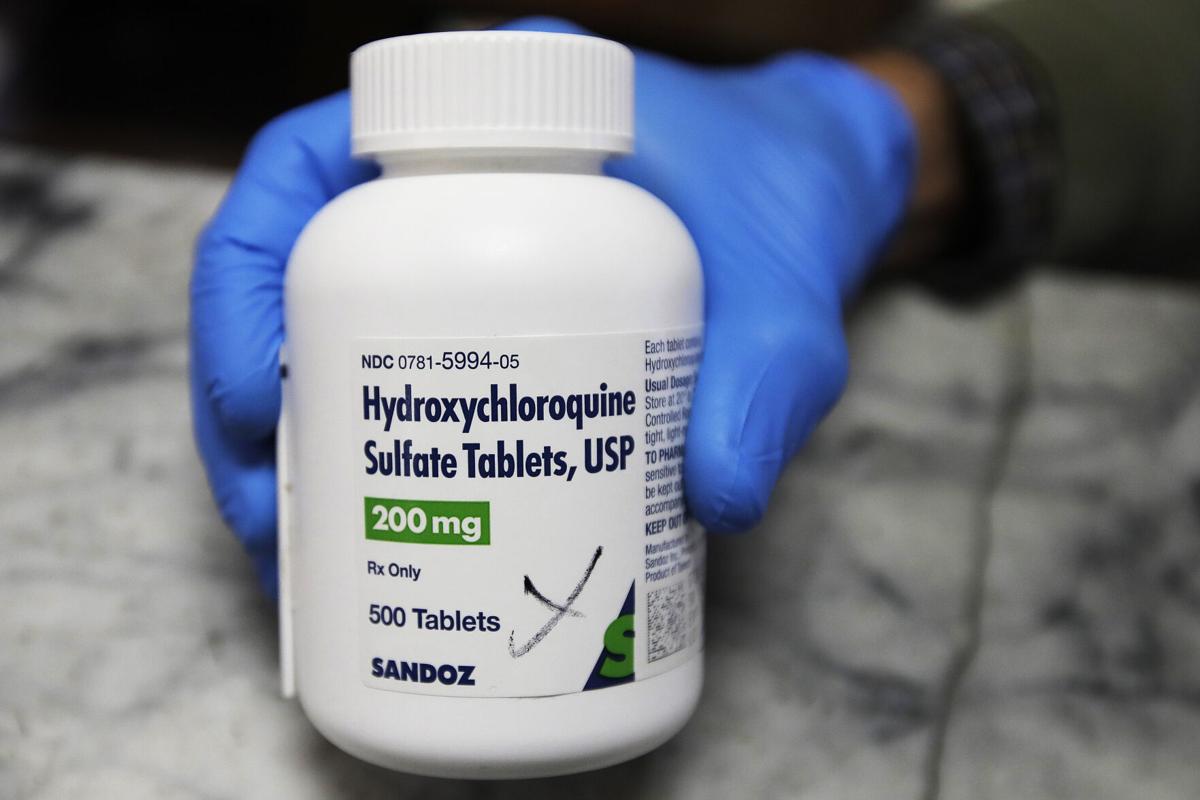 Results published Wednesday by the New England Journal of Medicine show that hydroxychloroquine was no better than placebo pills at preventing illness from the COVID-19 coronavirus.

President Trump told reporters in May that he was taking zinc and hydroxychloroquine during a meeting with restaurant industry executives about the coronavirus response Monday in the White House. Vice President Mike Pence listens.

A bottle of hydroxychloroquine tablets.

Results published Wednesday by the New England Journal of Medicine show that hydroxychloroquine was no better than placebo pills at preventing illness from the COVID-19 coronavirus.

The China virus threatens to kill America’s First Amendment. Without free speech, we are not free.

The latest assault on speech forcibly silenced a group of physicians who dared state their belief in the efficacy of hydroxychloroquine in treating COVID-19. After footage of the physicians’ pro-hydroxy statements went viral, Facebook blocked it. YouTube (owned by Google) and Twitter followed Facebook’s lead.

The government-protected social media monopoly censored a message that challenged the popular crowd.

The physicians, who call themselves “America’s Frontline Doctors,” had a website that went dark after the social network monopoly censored the video. Visitors to the site see a message that says “website expired.”

Twitter punished President Donald Trump’s son, Donald Trump Jr., for tweeting the physicians’ video. The corporation ordered him to delete the tweet and blocked him from tweeting for the next 12 hours.

The physicians swear by a combination of hydroxychloroquine, zinc, and Zithromax as a treatment for COVID-19. The doctors include:

• Dr. Robert Hamilton, M.D., who earned his medical degree at UCLA and has practiced as a pediatrician for 36 years in Southern California.

• Dr. Simone Gold, M.D., J.D., who has practiced for 31 years since earning her medical degree from the Chicago Medical School.

• Dr. Dan Ericson, D.O., who has practiced for 16 years since earning his osteopathic degree from the Western University of Health Sciences medical school.

• Dr. Stella Immanuel, who says she has treated 350 COVID-19 patients in Texas after practicing medicine for 30 years. She graduated with honors from the University of Nigeria and completed her residency at Bronx-Lebanon Hospital Center in New York.

The ad hominem crusade focused mostly on Immanuel, probably because she’s a Black woman from Africa who speaks with an accent. No one found material to question her professional competence, aside from one unresolved malpractice case in a 30-year career, so they attacked her religious beliefs with a slightly veiled appeal to xenophobia.

“Immanuel says she was born in Cameroon and describes herself as ‘God’s battle ax and weapon of war,’ ” says a disparaging report by CNN.

Other media blasted Immanuel, who is also a minister, for believing in aliens, demons, and assorted faith-based conspiracy theories. Surveys consistently find more than 70% of physicians have religious beliefs, all of which sound weird to atheists and secularists in the anti-religion mainstream media.

Members of America’s Frontline Doctors are not the only physicians who champion hydroxychloroquine as a COVID-19 treatment. Physicians all over the country are quietly prescribing it to their patients, friends and family members.

Among them is Dr. Harvey Risch, a medical doctor and professor of epidemiology at the Yale School of Public Health. Dr. Risch has written more than 300 peer-reviewed medical articles and holds senior positions on the editorial boards of several leading medical journals. We can take his word, or that of journalists at CNN, the Washington Post, and the New York Times who haven’t spent a day in medical school.

“Tens of thousands of patients with COVID-19 are dying unnecessarily. Fortunately, the situation can be reversed easily and quickly,” Dr. Risch wrote in Newsweek on July 23. “I am referring, of course, to the medication hydroxychloroquine. When this inexpensive oral medication is given very early in the course of illness…it has shown to be highly effective, especially when given in combination with the antibiotics azithromycin or doxycycline and the nutritional supplement zinc.”

Dr. Risch describes eight peer-reviewed studies that attest to the efficacy of hydroxychloroquine as the key element of a pharmaceutical cocktail.

“I myself know of two doctors who have saved the lives of hundreds of patients with these medications, but are now fighting state medical boards to save their licenses and reputations,” Dr. Risch wrote. “The cases against them are completely without scientific merit.”

The mainstream media and other left-wing activists waged war on hydroxychloroquine the moment President Trump expressed hope for it on March 19. He must be wrong, no matter what, and damn the consequences.

“It is viewed as a marker of political identity, on both sides of the political spectrum,” Dr. Risch says. “Nobody needs me to remind them that this is not how medicine should proceed.”

We are not doctors or scientists and have no idea whether hydroxychloroquine has a legitimate role in treating COVID-19. But our society should value the scientific method and let it run its course before politics condemn this or any drug. The doctors who defend it should not be silenced and punished in a country built on the guarantee of free speech and the free exchange of ideas.

The Gazete editorial board