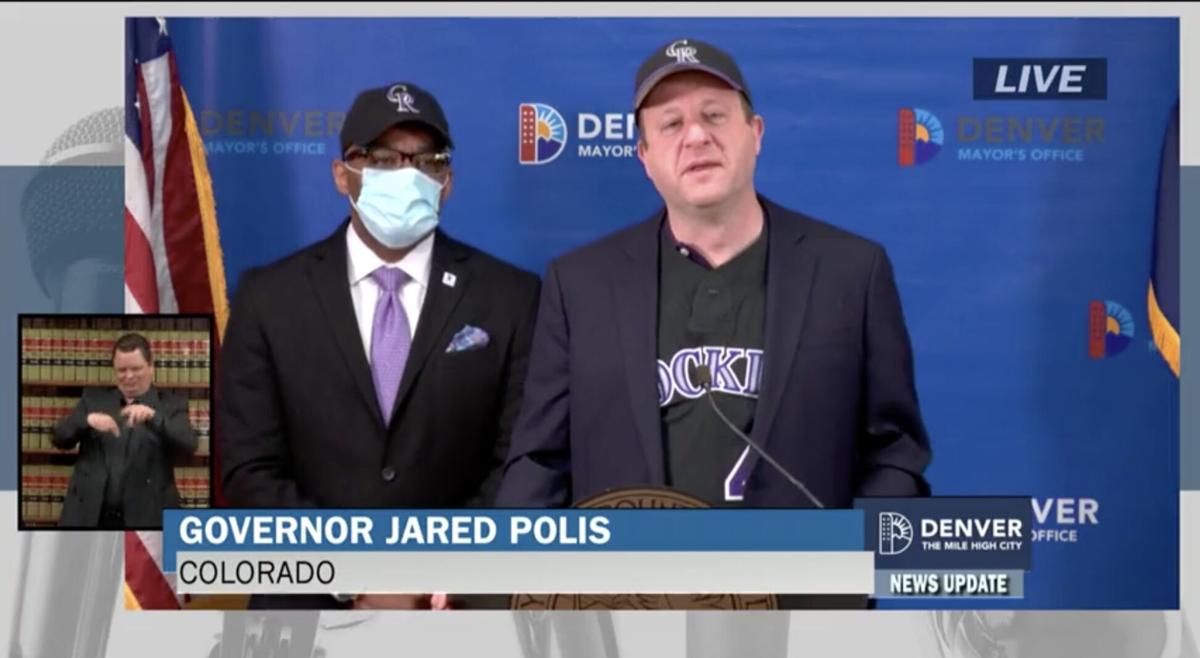 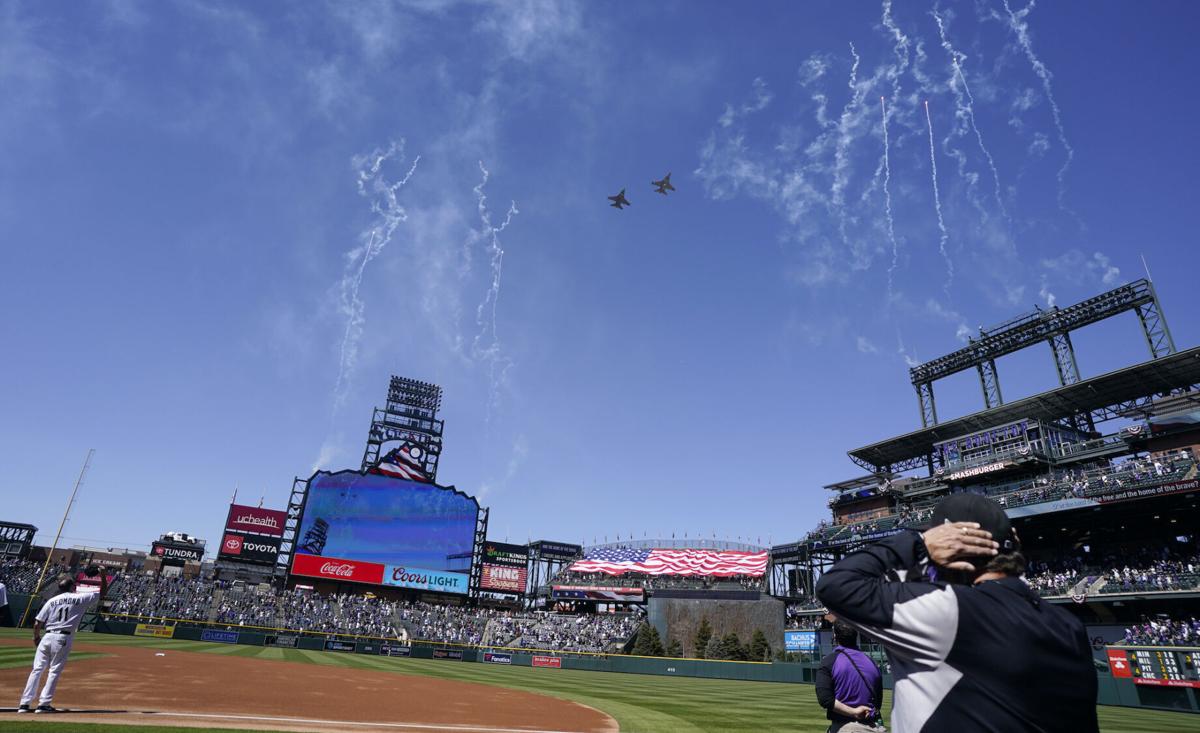 Two F-16 fighter jets from Buckley Air Force Base in Aurora, Colo., fly over Coors Field as part of festivities to mark the regular-season opening game as the Colorado Rockies host the Los Angeles Dodgers in a baseball game Thursday, April 1, 2021, in Denver. The Rockies won 8-5. 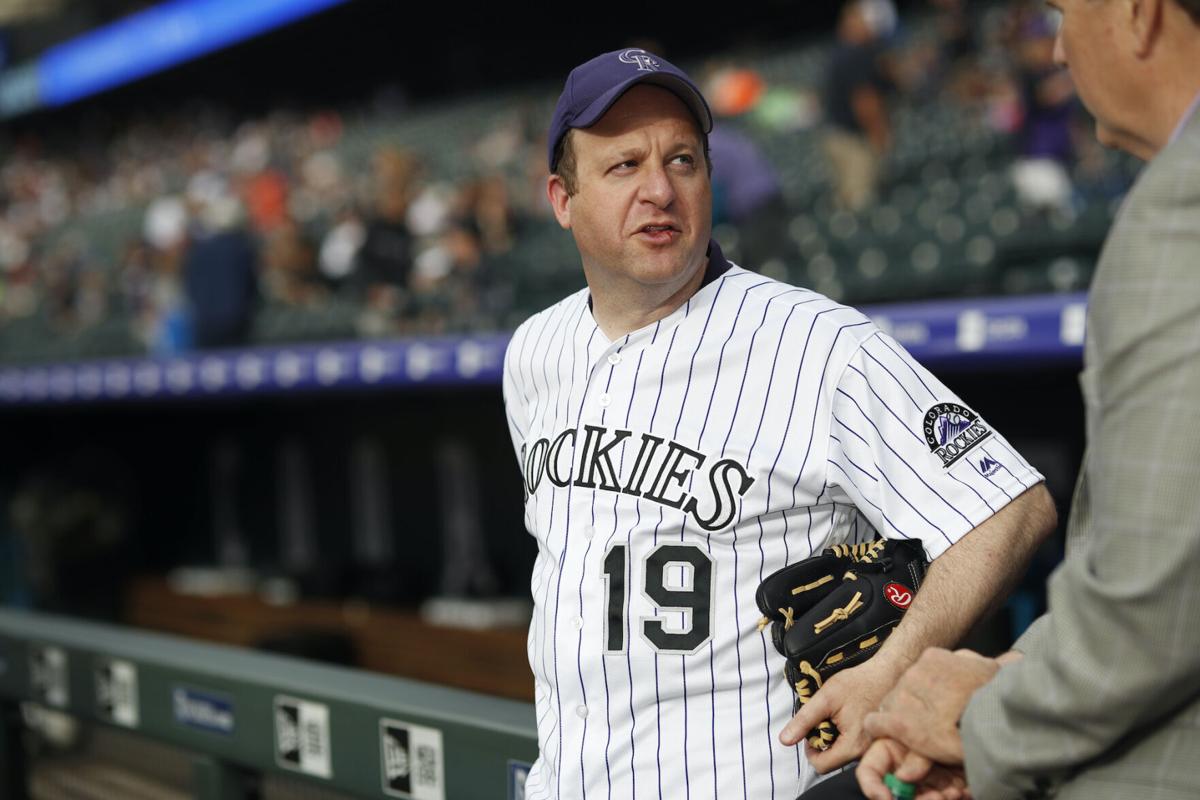 In this Friday, June 14, 2019, file photograph, Colorado Governor Jared Polis prepares to throw out the ceremonial first pitch before the Colorado Rockies host the San Diego Padres in Denver.

Two F-16 fighter jets from Buckley Air Force Base in Aurora, Colo., fly over Coors Field as part of festivities to mark the regular-season opening game as the Colorado Rockies host the Los Angeles Dodgers in a baseball game Thursday, April 1, 2021, in Denver. The Rockies won 8-5.

In this Friday, June 14, 2019, file photograph, Colorado Governor Jared Polis prepares to throw out the ceremonial first pitch before the Colorado Rockies host the San Diego Padres in Denver.

It was no accident that Denver's Coors Field landed this summer's All-Star Game after Major League Baseball pulled the event from Atlanta over recent changes to Georgia's voting laws. But the feat had more to do with preparation and hustle — and possibly the Mile High City's high, dry air — than the state's election system.

Colorado's "national gold standard" all-mail balloting and consistently high voter turnout made sure Denver was a viable option to host the Midsummer Classic, say insiders, but it was the Colorado Rockies' owners, a governor with a lifelong affinity for the sport and a city with tourism and special events industries poised to handle a week's worth of festivities on short notice that scored the game.

The league made it official Tuesday and the All-Star Game will be held July 13 in Denver, for the first time since 1998.

“This is fundamentally about baseball and it’s about the fans," Gov. Jared Polis said at a Tuesday news conference. "And I couldn’t be more excited that we're gonna be able to highlight Denver as the venue."

Polis, who played for the congressional baseball team during his decade as a member of the House — and holds the team record for RBIs, he was quick to point out Tuesday — stressed the importance of the game, leaving the political points to others.

"Colorado has really knocked one out of the park on this one," he said.

Noting that he's always felt that the crack of the bat means springtime, Polis added, "This year's particularly special to be able to hear the real thing at the ballfields, not just a recording, not just on TV."

The timing, he said, couldn't be better. The state is on track for almost every resident who wants a COVID-19 inoculation to be fully vaccinated by late May and fully immune by mid-June, he said, well before crowds descend on Denver and surrounding areas, pumping more than $100 million into the local economy.

"Everybody expects a fully packed, sell-out stadium in July," Polis said. "That's going to be good for Major League Baseball, good for Colorado and an exciting experience for fans."

Added Polis: "Get ready for a truly epic Home Run Derby at a mile above sea level. This is going to be a lot of fun."

Veteran political consultant Rick Ridder, founder of RBI Strategies and a member of the Denver Metropolitan Major League Baseball Stadium District board, said it would be a mistake to ascribe political considerations to MLB's decision to pick Denver when it had everything to do with baseball, including the Rockies' beleaguered owners, the Monfort family.

The league decided to move the game from Truist Park in Atlanta on Friday, joining corporate icons Coca Cola, Delta Airlines, Citigroup and dozens of other companies denouncing regulations signed into law on March 25 by Georgia Gov. Brian Kemp.

The decision to relocate the game, baseball commissioner Rob Manfred said in a statement, was “the best way to demonstrate our values as a sport."

As soon as MLB let it be known the All-Star Game needed a new home, and fast, Polis and Denver Mayor Michael Hancock extended an invitation publicly while "burning up the phones," according to a Polis spokeswoman. At the same time, a supporting cast of Democratic officials and politicians hit social media, touting the state's record of expanding access to voters while maintaining elections touted as among the nation's most secure.

Manfred left no doubt why Georgia's new law, which critics say limits access to the ballot, had prompted the move.

"We proudly used our platform to encourage baseball fans and communities throughout our country to perform their civic duty and actively participate in the voting process. Fair access to voting continues to have our game’s unwavering support," he said.

But when it came time to make it official on Tuesday that Coors Field would be the new venue, Manfred didn't mention voting or politics, and neither Polis nor Hancock strayed from their roles of baseball and civic boosters.

“Major League Baseball is grateful to the Rockies, the city of Denver and the state of Colorado for their support of this summer’s All-Star Game,” Manfred said in a statement. “We appreciate their flexibility and enthusiasm to deliver a first-class event for our game and the region. We look forward to celebrating our sport’s best players and entertaining fans around the world.”

"I think Colorado is simply the best place to showcase all the amazing talent of Major League Baseball," said Polis. He noted that Denver has been preparing bids to host a future All-Star Game and already had plans in place for hotels, events and security.

"Colorado's scrappy," Polis added. "We're ready to get this together."

Ridder acknowledged that the move took place in a political environment — "You can't take it to Texas, you can't take it to Arizona," he noted, naming two states considering new voting laws. "But from the baseball perspective, if you're trying to get eyes on the TV screen, those guys are sitting there saying the Home Run Derby at Coors Field will be must-watch TV. All of this is part of a factor that the governor and others played into."

Not that many teams pushed for it, he said — reportedly, Chicago, Kansas City and St. Louis were also in the running — but after some early lobbying from Polis and Hancock, Ridder said, "it became very clear by about 48 hours that Colorado was the front-runner."

"Colorado was a good choice, it enhances the game, it helps a management team, it is politically easy, and Colorado wants it — and you have a governor who will probably by July 1 have lifted all the restrictions on coronavirus, so you can get 48,000 people in the stadium."

"Those saying it's all about highest turnout — has nothing to do with it. It was not a political decision in that way," he said. "But it helped that there's a governor who once used to play baseball. He knows the game, he likes the game and is able to communicate how Colorado's going to put forward the opportunity for this."

Woody Paige: No Beanie Babies for Denver's second MLB All-Star Game; how about the humidor?

Woody Paige writes: The Midsummer Midseason Night’s Dream will play out in Denver again. No Beanie Babies this time. Turn off the humidor for the Home Run Derby.