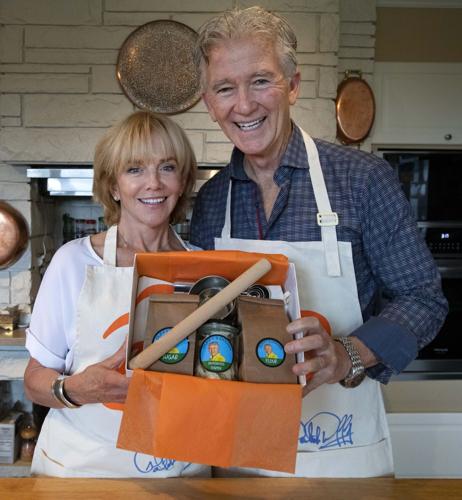 Actor Patrick Duffy and his partner, actress Linda Purl, launched Duffy's Dough last week, a new business that sells sourdough starter kits. The kits include a little bit of Duffy's family history; the dehydrated sourdough has been in his family since 1952 when his mother was gifted the starter when the family lived in Alaska. CHRISTIAN MURDOCK, THE GAZETTE 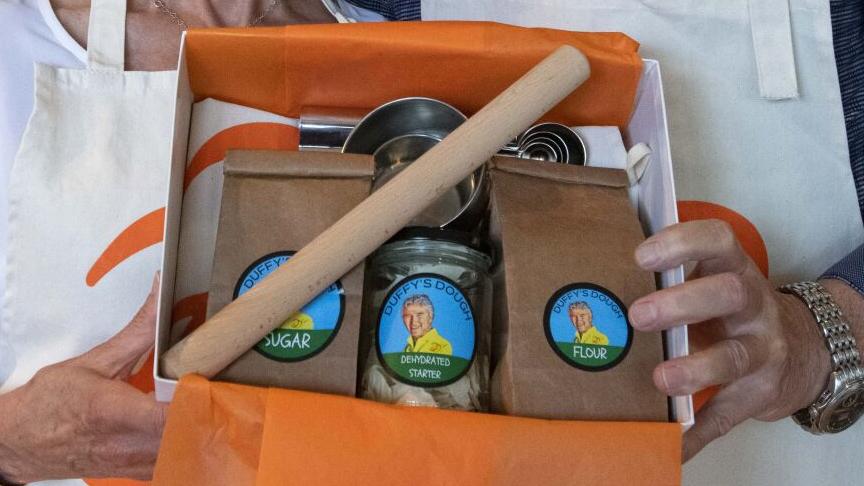 Actor Patrick Duffy and his partner actress Linda Purl launched their business Duffy's Dough in last week selling sourdough starter kids. The kits include a little bit of Duffy's family history. The dehydrated sourdough has been in his family since 1952 when his mother was gifted the starter when the family lived in Alaska. (The Gazette, Christian Murdock)

Editor's note: The sourdough starter kits are not available at Stellina Pizza Café but, as noted below, through the Duffy's Dough website, https://duffysdough.com/

Inspiration can be found in the unlikeliest of places.

For actor Patrick Duffy, best known as Bobby Ewing from the TV show "Dallas," and actress Linda Purl, from "Happy Days" and "Matlock," the inspiration to start their own bread company was rooted in family memories.

Duffy's Dough, as Duffy and Purl call their business, was launched last week. The inklings for their selling dehydrated sourdough starter kits began in Purl’s Colorado Springs home when Duffy made sourdough pancakes for her; the couple have been dating for about two years.

Since that first day in the kitchen eating pancakes, their experience with sourdough has expanded to producing hundreds of sourdough starter kits in the commercial kitchen of Stellina Pizza Café in Colorado Springs' Mid-Shooks Run neighborhood.

The beginnings of their business date back over 70 years, Duffy and Purl say.

In 1952, Duffy’s parents drove him and his sister from Montana to Alaska in a GMC pickup, towing a trailer house behind them while traveling on a gravel road.

It was in Alaska that Duffy’s mother received a sourdough starter — a leavening agent that enables bread dough to rise, according to online recipe sites — as a gift from a neighbor.

The lore around the starter was that the spores used in the starter dated back to the days of the Alaska Gold Rush miners.

“I don't know if that's true, but I'm sticking with that story because they can't prove it wrong,” Duffy said. “But we've had it in our family since 1952 and it's been a pure sourdough starter with nothing added to it but flour, sugar and water for 70 plus years.”

Duffy said his mother kept the sourdough starter even when she had to scrape bits of the dough from the inside of a suitcase full of clothing after it exploded from the pressure of the airplane when they flew back from Alaska.

Duffy himself didn’t bake until he graduated from college and inherited some of his mother’s sourdough starters from his sister.

With his own starter, Duffy made everything from bread to tarts.

After making his sourdough pancakes for Purl during their pandemic-born romance, the two thought it would be worthwhile to sell the sourdough starter as their own business.

Without an entrepreneurial background, Purl, 67, and Duffy, 73, said they needed friends to help them give their business legs.

From creating a website to learning the ins and outs of business, the couple leaned on friends along the way, such as local bike and tire business owner Steve Kaczmarek.

“Everybody has jumped in,” Duffy said.

United to suspend nonstop service from Colorado Springs to LA

From January through July, Purl and Duffy worked on every aspect of their business while they were on tour together in the United Kingdom doing 152 theatre performances.

Purl would sit backstage with crayons scribbling out potential logos for the business — taping together mock-ups of their marketing plans with Band-Aids.

“Every bit of it has been hands on,” Duffy said.

And it has been.

From working together in the kitchen wearing hairnets, to learning how to make their starters into a dehydrated form, to packaging the first 1,000 kits, they’ve been involved in every detail.

Buyers can order the dehydrated sourdough starter kit (so it can travel by mail), a Duffy family recipe book and other cooking accouterments for $78.

Duffy and Purl’s goal for the business is to make enough money to give their net proceeds to charities that focus on food scarcity.

“That is absolutely our hope and desire if we succeed,” Purl said. “Right now, we're a long way from having any net proceeds.”

Either way, Duffy hopes that the business can be a tribute to honor the memory of his mother and his family as a whole.

“We have this company thanks to Linda and her perseverance and her knowledge and her friends and everything that has given birth to a way of giving back the memory that I have of my parents on our trip to Alaska,” Duffy said.

Linda Purl, formerly of 'Happy Days' and now living in Colorado Springs, returns to the Conservatory

7 p.m. Friday, Colorado Springs Conservatory, 415 S. Sahwatch St., 80903, tickets $35 at coloradospringsconservatory.org Of all the art she's immersed herself in, Linda Purl considers herself an actress first and foremost. Which makes sense considering where acting took her: to roles in premier television shows, perhaps most notably "Happy Days," in which she played Fonzie's girlfriend. She also starred in "Matlock" and appeared in "Hawaii Five-O" as well as, more recently, "The Office" and "True Blood." But all throughout her career spanning back to the 1970s, Purl, 60, prided herself as a singer who took her talents to Broadway in between her TV work.