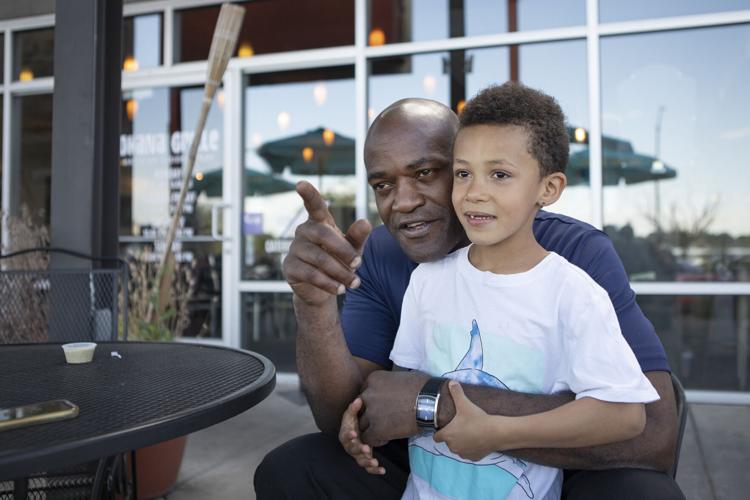 Above, Quasey Vinson points out the Denver skyline beyond Sloan’s Lake to his son Tyrese Vinson while the two wait for their food at Ohana Grille in Edgewater. Below, Quasey Vinson stands prepared to march in a parade in his dress greens while in the Army Corps of Engineers. 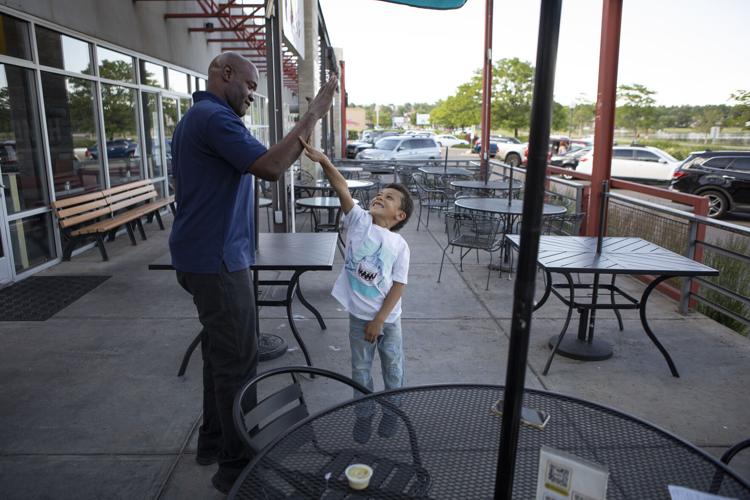 Quasey Vinson gets a high five from his son Tyrese Vinson, 5, while the two wait for their food at Ohana Grille in Edgewater. 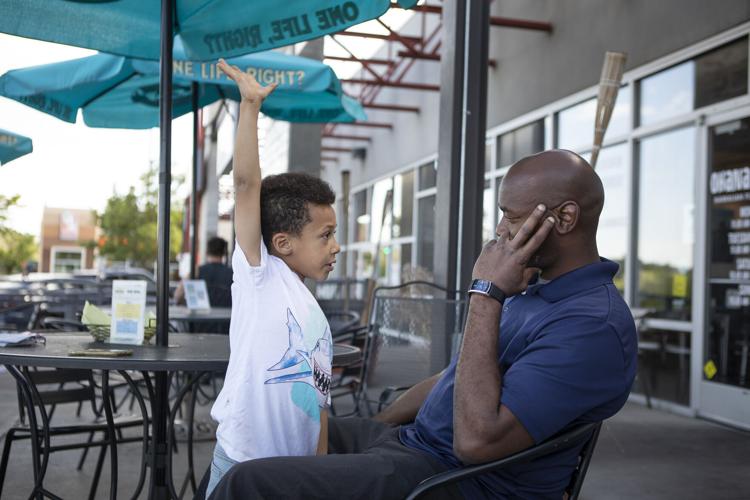 Tyrese Vinson, 5, tells his father Quasey Vinson all about his day while the two wait for their food order on Tuesday, June 7, 2022, at Ohana Grille in Edgewater, Colo. (Timothy Hurst/The Denver Gazette) 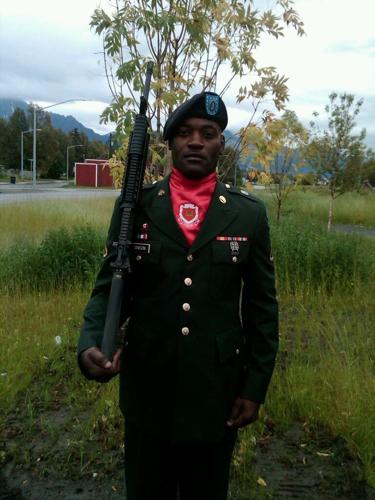 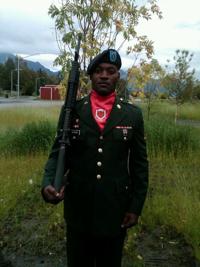 Quasey Vinson prepared to march in a parade in his dress greens while in the Army Corps of Engineers. The veteran served three years of active duty in Alaska before he came to Colorado to transition to civilian life.

DENVER • Quasey Vinson gave his kindergartner a taste of a faraway place. “Could you possibly mix pineapple juice with apple juice?” he asked the waitress.

“And a mahi-mahi taco?” asked Tyrese, who is missing his two front teeth. Vinson ducked his head at the extra expense. "One mahi-mahi, please, and the rest chicken."

The request was in line with the 5-year-old’s preschool graduation bucket-list wish: a trip to an exotic island. The tropical treats were a father’s compromise. “You want to go to an island? We can’t do that now. Someday, we’ll do that.”

Vinson, 47, feels pretty good about his chances for a full life with Tyrese now that he has a new career in computer technology. After a life of jobs that were leading nowhere, he took on a program to learn computer skills that he knew would increase his value to employers salivating to fill urgent needs in information technology.

The fact that he landed in Denver after leaving the Army was a happy coincidence. Denver Metro’s share of national tech jobs grew by 2% from 2015 to 2019, according to the Brookings Institute, and the city is considered a rising hub in the industry.

El Paso County is also a tech hub and is  hurting for IT experts. Numbers from the Colorado Springs Chamber & Economic Development Corp. show that of about 28,500 openings last month, nearly a tenth of those were for software developers, systems engineers and information security analysts.

According to the Department of Labor and Employment, Colorado is suffering from a critical IT worker shortage. The latest numbers show that of 115,000 openings in Colorado, 15,863 are in the computer technology and mathematical fields.

Vinson filled one of those when he accepted a job three weeks ago.

“I’m in a better spot as far as having my own place, an apartment. My son can stay with me so I'm with him on every weekend instead of sparingly,” said Vinson, who credits an unconventional training and placement program called Activate Work for his recent good fortune.

The journey hasn’t been easy.

Just two years ago, the Army Corps of Engineers veteran was down after having moved to Colorado to start a family with Tyrese’s mom. That failed relationship, plus the pandemic, had him struggling even though he was working two jobs.

“I worked as a restaurant line cook, and I was also working at a warehouse. I enjoyed those jobs, but I wasn’t going anywhere.”

The kicker? It was free.

Vinson found out that Activate Work was for real. But that the commitment would require a dramatic lifestyle change. Vinson went through two interviews just to be accepted into AW’s program.

“They liked my eagerness to learn and my willingness to do something different,” said Vinson. When he graduated in November 2020, he was part of AW’s second class. “After COVID hit and everything was shut down, I wanted to add to my skills. I wanted to add something else to my resume for when the economy opened back up.”

Activate Work’s founder and president, Helen Young Hayes, was on the same thought wave. When COVID-19 began, Hayes predicted that once the pandemic was over, employers would be starving for reliable employees; also, that not only would people lose retail and fast-food jobs to automation, but that IT could provide a firm landing for those displaced workers.

“What we saw during the pandemic was a bigger move to working from home. And 40% of the people who were in economically cyclical industries and displaced in Colorado during the pandemic say they were looking for a career before it started,” said Hayes. “There is a difference between a job and a career.”

Her solution? A focus on a population struggling to achieve financial security. It appeared to be a win-win.

Activate Work recruits marginalized workers whom she calls “diamonds in the rough,” who have been laid off or are disillusioned in their job. AW trains and coaches them, placing them with Colorado companies desperate to fill thousands of empty IT positions.

People like Vinson who are accepted to Activate Work go through a fast-track IT program as opposed to getting a college degree, which Hays believes is an unnecessary expense for that particular discipline.

“IT used to recruit four-year computer science graduates. But there’s a million-person IT talent shortage in the U.S. We have a real macro problem for IT,” said Hayes. “This is what employers tell us they want. This program moves people to the middle class really quickly.”

Among the Colorado companies using Hayes’ placement program are First Bank, Ping Identity, Bank of America, Trimble and Denver Health. Companies pay a fee for the service and for continued training, and Hayes supplements that with philanthropy.

Learners, as AW calls its trainees, have been known to triple their annual salaries once they are placed. The average starting pay for prospective workers who go through Activate Work’s program begins at $20 an hour and the retention rate is one year, which is around 35% higher than the industry average.

Hayes said all it takes for people like Vinson is the willingness to go through the training and a desire for a better life. “We look at individuals who are struggling to make ends meet. Historically, Colorado ranked 12th in overall prosperity, but we ranked 37th in terms of racial inclusivity.

"We don’t target diversity for diversity’s sake. Our goal is to get them to the point where they can take care of their families and are driving wages instead of barely getting by wages.”

Besides the training, AW devotes one day a week to help learners target their goals and write resumes. Behavioral health also is a component of the training.

A mental health turnaround was exactly what Vinson needed. With his unemployment money, he bought a computer for virtual classes. His next goal is to buy a car. He resolves technology issues hands-on at 9th Way Insignia, a cybersecurity and software development business within the VA, which has a branch in Colorado.

One day, he’ll take Tyrese to build castles in the sand.

“I’m in awe. I get tears sometimes when I think about the journey,” said Vinson. “Things are moving up.”

Driving through the desert of far western Colorado, something like a dream appears. Between the dirt and rock faces of buttes and mesas, there’s an ocean of green waving along Interstate 70.