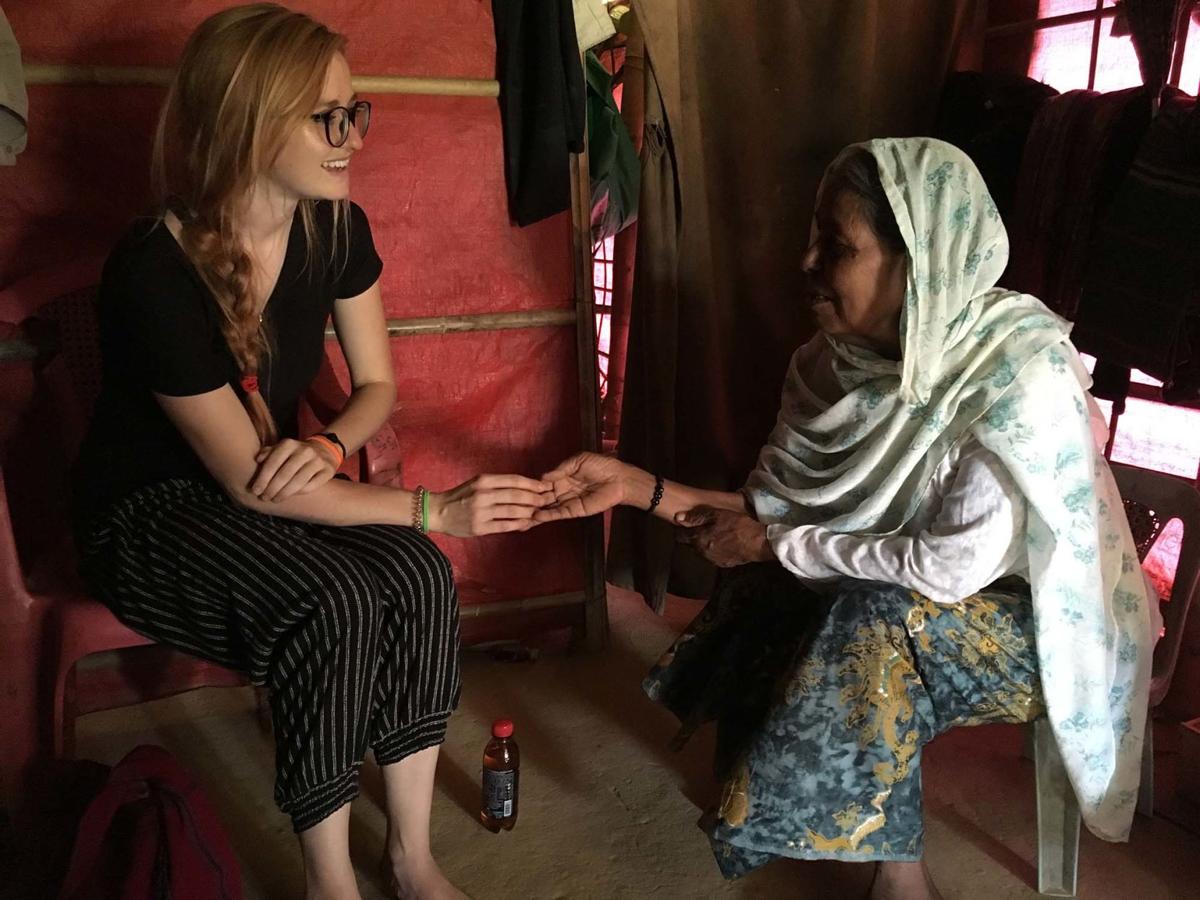 Air Academy High School graduate Sophie Danielson, 22, visits with a Rohingya Muslim refugee at a refugee camp in Thailand. Danielson took a job teaching English at the camp after high school and has taken an active role in reconnecting separated families. 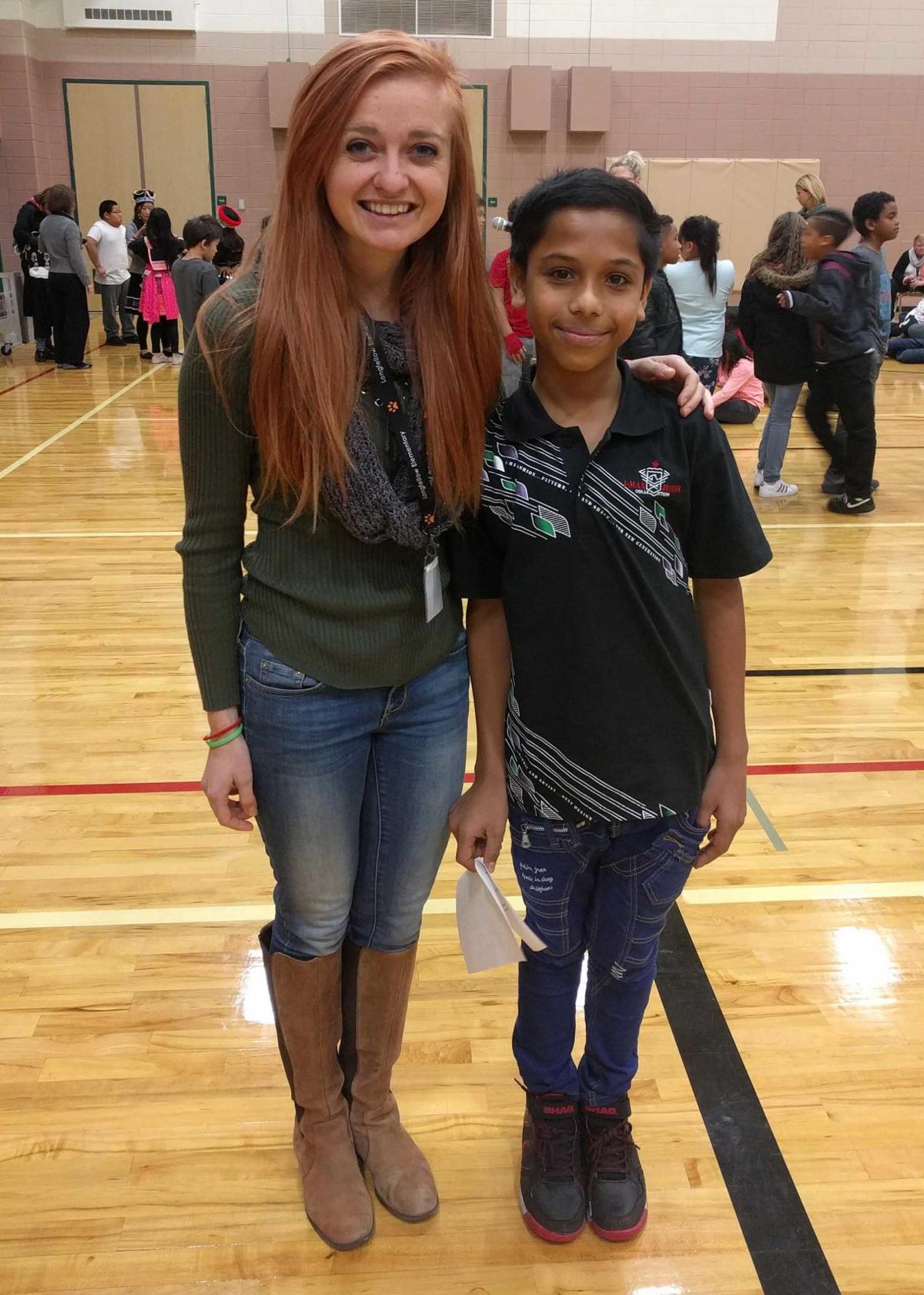 Air Academy graduate Sophie Danielson stands with Rohingya Muslim refugee Yasin after the 10-year-old told his story to his classmates in Sheboygan, Wis. Danielson met Yasin at a camp in Thailand. 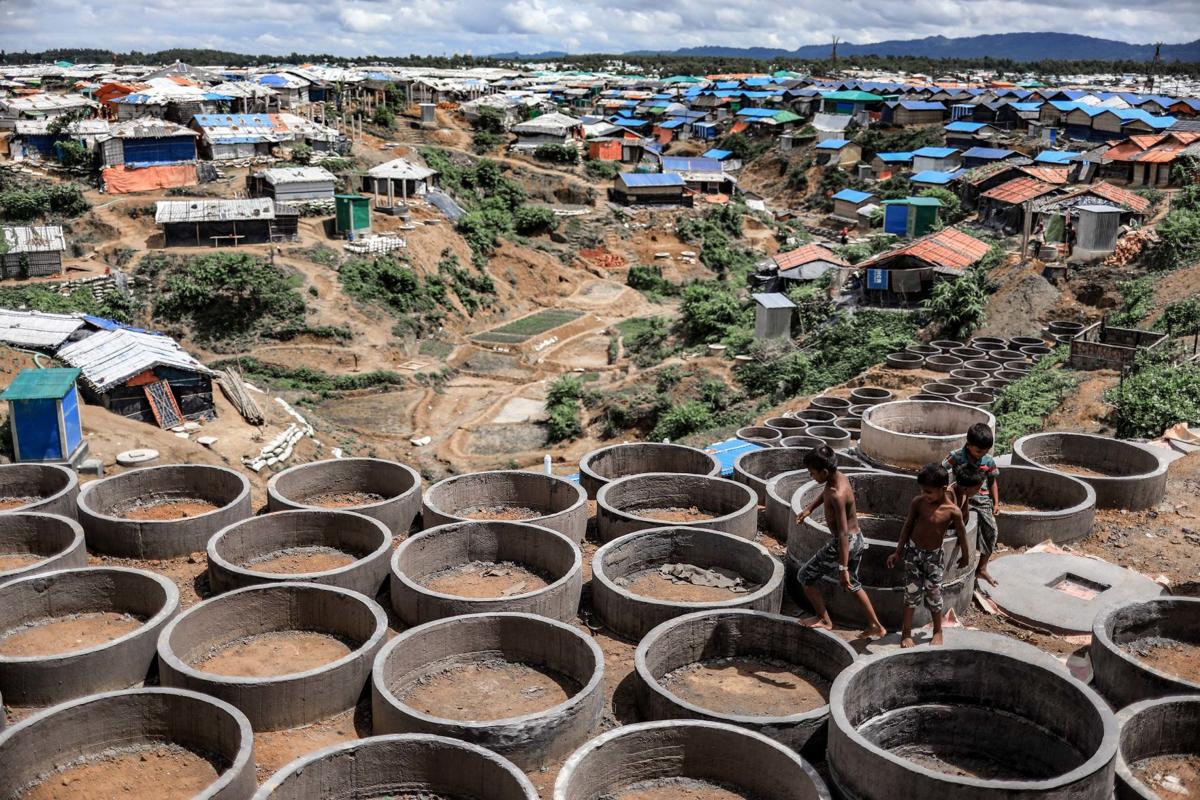 Rohingya Muslim children play in September at a refugee camp in Thailand. Air Academy High School graduate Sophie Danielson took a job teaching English at the camp after high school and has taken an active role in reconnecting separated families. Danielson has reconnected families spread across eight states and seven other countries. She now does her work from Colorado Springs.

Air Academy High School graduate Sophie Danielson, 22, visits with a Rohingya Muslim refugee at a refugee camp in Thailand. Danielson took a job teaching English at the camp after high school and has taken an active role in reconnecting separated families.

Air Academy graduate Sophie Danielson stands with Rohingya Muslim refugee Yasin after the 10-year-old told his story to his classmates in Sheboygan, Wis. Danielson met Yasin at a camp in Thailand.

Rohingya Muslim children play in September at a refugee camp in Thailand. Air Academy High School graduate Sophie Danielson took a job teaching English at the camp after high school and has taken an active role in reconnecting separated families. Danielson has reconnected families spread across eight states and seven other countries. She now does her work from Colorado Springs.

A few weeks ago, with his teacher, his mother, two sisters, brother and two cousins at his side, a boy began to tell his story.

The group had miraculously reunited in a Sheboygan, Wis., living room after the horrors of a life far, far away.

“I am a Rohingya Muslim,” the 10-year-old Yasin started. The teacher, Sophie Danielson, transcribed.

Danielson, 22, was visiting from her home in Colorado Springs. “It was surreal,” she recalls, as surreal as all of the other visits she’s made around the world with the people she came to know at a refugee camp in Thailand.

They are the scattered victims of ongoing persecution in Myanmar. The situation has turned to genocide in recent years, a crisis that Vice President Mike Pence recognized earlier this month during a meeting with the country’s civilian leader. It marked the Trump administration’s most high-profile criticism of the state-run violence to date.

It was the kind of moment Danielson had for more than three years been waiting for, since she became aware of the Rohingya as a wide-eyed graduate of Air Academy High School. College didn’t seem right. “She wanted to do something more,” her older sister, Jenna, says.

So Danielson took a job teaching English in Thailand, having no knowledge of the kids she would meet there. She didn’t know about the Rohingya, about their escaping to sea from Myanmar, about families like Yasin’s. Fathers and husbands and brothers and sons have been taken to prisons to be starved and tortured, while women and children are whisked away to refugee camps.

In Danielson’s classrooms, “the pictures they drew were of boats, men with guns, bodies in water,” she recalls. “Violent images. I was like, these kids are very traumatized.”

Danielson had no idea. Which is why she does not blame her fellow Americans for not knowing.

“How could they?” she says. “That’s why I’m sitting here. It’s part of my job to tell people about it.”

She’s in between her next “Rohingya reunion,” as she calls them, keeping an eye out for cheap flights to buy with the money she makes as a piano teacher in town. Her job, she feels, is to track down broken families, to record their stories and to share them, and also to serve as a bridge.

She is “dear Sophie” to Khairul Boshor, Yasin’s uncle who lives in the Netherlands after fleeing the killing fields of Myanmar. “I look upon her as my family member,” he writes in an email.

And while Boshor waits for America, “believing that one day America (will) bring a sustainable solution for our crisis,” Sophie is a source of hope. “She is representing my family and other Rohingya,” he writes.

Danielson has reconnected families spread across eight different states and seven other countries. One young woman she knew in Thailand has settled in Atlanta, while her mother remains at a camp in Bangladesh. Danielson flew to meet the old woman, to show her pictures of her daughter and to hug and cry with her.

“You are my daughter,” the woman said in broken English. “You will always be part of my family.”

Also in Bangladesh, Danielson befriended a young photographer, both of them helping each other to tell stories. While taking pictures, Nihab Rahman has also assisted NGOs at the crowded camp close to his home.

“[F]or these Rohingyas they don’t get the chance to meet and talk with their families again after separation,” Rahman writes in an email. “In that case, I feel very proud (of) Sophie for the work she’s doing.”

While raising awareness in her own country, Danielson wants to reach refugees with the nonprofit she launched this month.

Books Unbound aims to build an English-based learning program for the Rohingya. Danielson is developing a picture dictionary, with relatable images conveying nouns and verbs. An example: “A woman squatting over a fire cooking is more relatable than a woman in some cute skirt, cooking on an electric stove,” she says.

Doing the work from Colorado Springs is strange, Danielson admits. Sometimes home doesn’t feel like home. It hasn’t ever since she finished teaching in Thailand at the end of 2015.

In high school, Danielson was “a little socially awkward, kind of intense,” by her own description — an overachiever in the classroom and a devoted leader of the human rights club she started. She and her siblings were taught early on to keep perspective, to think beyond their own problems. In post-apartheid South Africa, their father worked to develop poor townships, introducing his daughters to people living in shacks.

The family bounced around the United States. Wherever they arrived, Danielson felt like a stranger, “kind of on the outskirts,” she says. This was especially the case upon her return from Thailand. “It was difficult to relate to other people,” she says. “I kind of kept to myself.”

Then, last January, her phone buzzed. “UNKNOWN,” read the caller ID. She answered.

“Teacher! Teacher!” shouted the woman on the other end. “Sheboygan! Sheboygan!”

Danielson had given Yasin’s mother her phone number before leaving Thailand. She never thought she’d hear from her, but there she was.

“She literally burst out crying,” Jenna says of her sister.

That led to another Rohingya reunion, each one ending and setting Danielson on another path to find a loved one displaced elsewhere.

“Sharing their stories to the world will make more awareness,” Boshor says. “It could turn the destiny of unfortunate children lives to the fortunate ones.”

So Danielson sat with Yasin one evening this month, typing his recollections.

Of his father being banished from teaching. Of him leaving to find work in Malaysia, where Yasin and the others tried to go. Of stalling for 24 days on the voyage, abandoned at a secluded island, where they believed they would die. Of another ship picking them up. Of landing in Thailand, confused and hungry. Of meeting the U.N., needing clothes, shoes and more. Of meeting teacher Sophie. Of being cleared, finally, to come to America, to find a new home in Sheboygan. Danielson kept a recorder running.

The next day, Yasin’s elementary school gathered in the gym, where he was to tell his story. Danielson was beside him.

“I am a Rohingya Muslim,” he started.

Sophie Danielson will be speaking on the Rohingya situation and her nonprofit, Books Unbound, at 1:30 p.m. Sunday at The Commons downtown (332 N. Tejon St.). Free to the public and refreshments will be served.

The Colorado Springs City Council passed a proclamation Tuesday afternoon declaring June as Immigrant Heritage Month, which one advocate said didn't go far enough. "I hope this is not just for show when our immigrant communities are currently under attack from the current federal administration down to our Sheriff's Office," said resident Jerima King said, referring to President Donald Trump calling immigrants "animals" and El Paso County Sheriff Bill Elder's willingness to detain suspected undocumented immigrants at the request of Immigration and Customs Enforcement. King asked the council to make Colorado Springs a sanctuary city, a city that designs policies to lessen the fear of deportation or family breakups for