As western wildfires have started to burn at unprecedented speeds, emergency managers should be preparing for blazes that previously seemed unimaginable.

"You have to plan for something even faster and more intense than we have seen," said University of Utah Professor Tom Cova, who has studied wildfire warning and evacuation systems.

The East Troublesome fire, the state's second largest blaze, burned 6,000 acres an hour in October 2020, growth Grand County Sheriff Brett Schroetlin called "unheard of" at the time. As fires keep breaking records, emergency managers should be modeling evacuations to understand what would happen if residents needed to get out in far less time than in the past, Cova said.

If the model for evacuation has been two hours, he said, they should consider an hour or a half an hour, he said.

However, in Colorado Springs, the idea of using a computer to model potential evacuation traffic to determine how long an evacuation could take has been at the center of controversy in recent months.

The meeting is scheduled 10 a.m. - 6 p.m.. Click or tap here to watch it. Representatives from Westside Watch, The Maverick Observer, an online news site, and experts, including Utah professor Cova, plan to give comprehensive presentations Monday at the Colorado Springs City Council meeting that will include how long it could take to get out of certain neighborhoods at risk.

Residents concerned about safely leaving their homes in a fast-moving fire have pushed for the models, while city and regional officials have said they do not intend to complete them because they cannot account for all the variables that drive fire behavior. Evacuation maps within the county are developed for each fire, officials maintain. 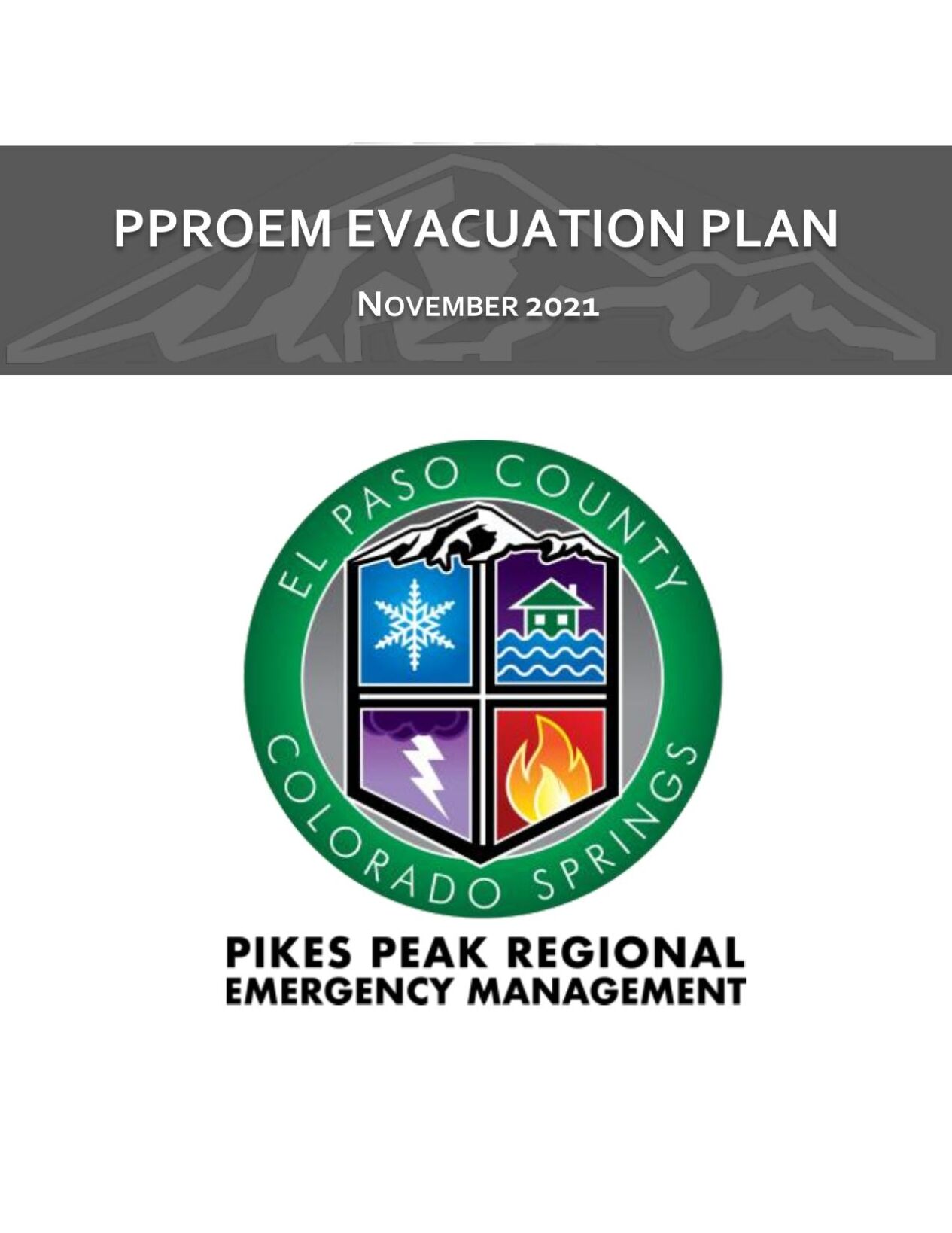 Both citizens and news outlets spent months trying to get the city's most current evacuation plans and maps to better understand how a fire would be handled and faced numerous denials, including one from the Colorado Springs Police Department that said releasing the evacuation maps from 2010 would be contrary to public interest.

The opportunity to view the maps and documents was offered, so long as no attempt was made to replicate them.

The city and El Paso County's recently released evacuation plan dated November 2021 did not include evacuation maps, details that residents want to see and information the city has included in previous studies, such as whether road capacity would be challenged. Dana Duggan, founder and board member for Westside Watch, a Colorado Springs group that advocates for wildfire safety, called the document a description of an inadequate process.

"It also does nothing to report to the public, in advance, how long it will take them to get out (their clearance evacuation times) and what routes they should take, depending upon the cardinal direction of the hazard," Duggan said.

Representatives from Westside Watch, The Maverick Observer, an online news site, and experts, including Utah professor Cova, plan to give comprehensive presentations Monday at the Colorado Springs City Council meeting that will include how long it could take to get out of certain neighborhoods at risk. Documents posted ahead of the meeting on the city's website show the models found lengthy delays.

Controversial Colorado Springs apartment project on Garden of the Gods Road denied, a win for protesters

The city pushed back on the value of evacuation models in a written response to questions compiled by several officials, including Jim Reid, director of the Pikes Peak Regional Office of Emergency Management.

"While modeling is one tool in the toolbox, it is only mildly valuable because models are inflexible and do not allow for the variables of an emergency — especially a wildfire. It does not and should never replace the expertise of the boots on the ground first responder who is on scene in a real life situation. Currently we have out of state, paid consultants who are pitching a product to City Council and the city that they would present as the singular answer to evacuation," the statement said.

The city encourages residents to be familiar with all the exits out of neighborhoods so they can leave safely on their own, the email said.

The residents also plan to propose an ordinance Monday that would require the city to consider the time it takes to evacuate an area to be a factor in considering whether new development projects can be allowed.

The ordinance is modeled on the city's rules that govern building on soils that might pose a geological hazard, said Bill Wysong, with Westside Watch.

"What’s the difference between a slippery slope or building in a WUI (wildland urban interface) where you have got a problem if it catches fire," he said.

The issue of whether infill development projects potentially create inescapable neighborhoods has been a core part of the ongoing debate over evacuation planning since earlier this year, when residents organized to oppose 400 proposed apartments along Garden of the Gods Road.

Many of the people who spoke against the increased density recalled fearing for their lives as they fled from the Waldo Canyon fire. Many residents were trapped in gridlock trying to leave and worry that densifying the area could compound the problem.

The Colorado Springs City Council denied the project, a decision that has been challenged in court.

The idea that the city would approve more development close to the mountains, but not run a simulation to see how it could change evacuation seemed "strange," Cova said.

"You don’t know what you are creating when you keep adding," he said.

While the federal government doesn't require local governments to do evacuation planning or involve the community at all, it can help in an emergency.

"It’s hard to move troops that don’t know they are in the Army," Cova said.

In a written response, city and county officials said evacuation drills are completed annually to educate residents about finding evacuation routes of their neighborhood among other aspects of evacuation.

The Office of Emergency Management also just launched Pikes Peak Prepared, a new app to help the community prepare for disasters, among other outreach efforts.

Officials said the sign up rate for emergency notifications is extremely low.

"The awareness of the public continues to be apathetic and limited despite our intensive education efforts," the statement said.

Wysong with Westside Watch noted the community approved a city request in the November election to retain up to $20 million for wildfire mitigation, while turning down a similar measure for county roads.

"That ought to tell the city we are not apathetic," he said.

Other communities, such as Irvine, Calif., have posted highly detailed evacuation maps online so that residents are aware of what routes they could use in an emergency.

Bobby Simmons, emergency manager for Irvine, said he has heard arguments similar to those posed in Colorado Springs that maps should only be developed once a fire starts based on the particular conditions, but he pushed for the city's highly detailed prepared map with predetermined evacuation zones and routes following the review of numerous after-action reports following devastating fires in California.

The map was put to the test during the Silverado fire in October 2020, when officials evacuated 100,000 people in four and a half hours from the city and worked extremely well, he said. The pre-planning allowed city officials to work much faster than they would have huddled around a paper map, he said.

No one was calling out the need to evacuate east of a certain street because the pre-designed zones put everyone on the same page, he said. The routes do not indicate that residents should go a certain direction, because officials will be in place to direct them based on the direction a fire is moving, he said.

The map can also be updated in real time so that all officials and the public could be looking at the same information, he said.

"When you are telling people to evacuate they need a map in front of them that moment. … It needs to be live, it needs to be interactive," he said.