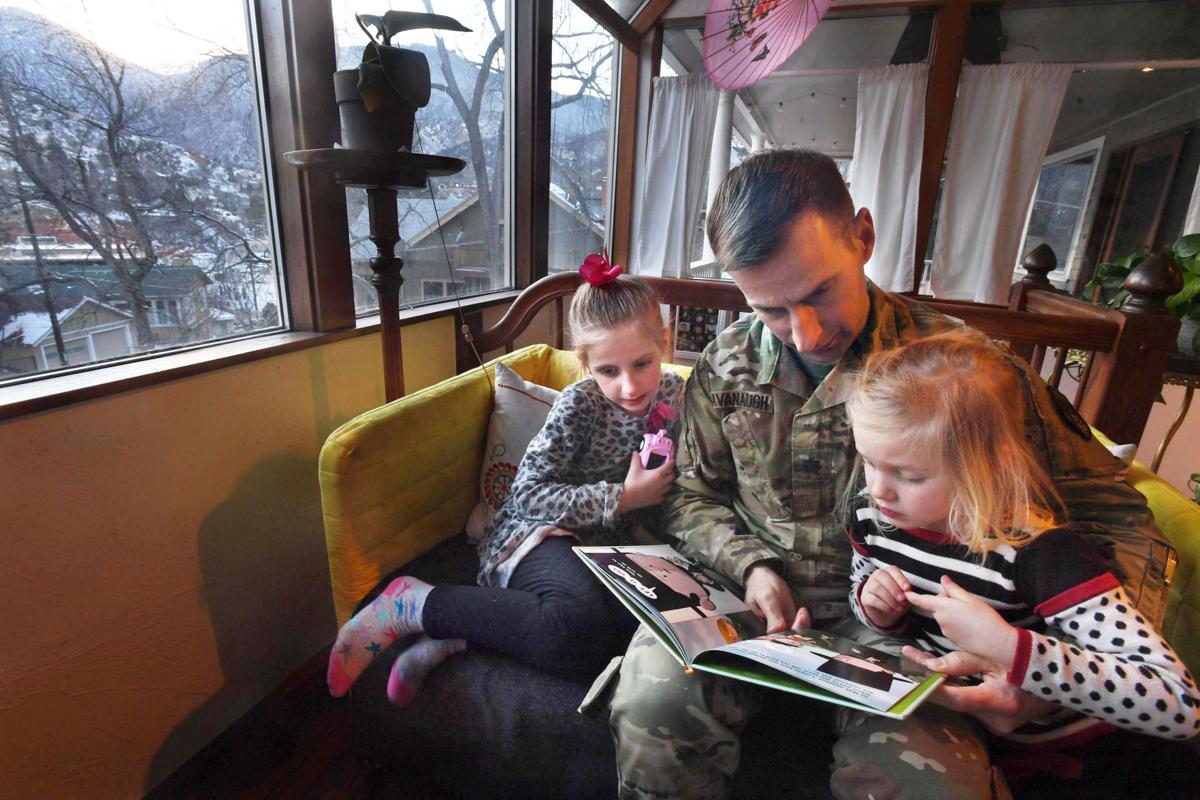 When Matt Cavanaugh gets home in the evenings, he gets to spend time with his little girls, Georgie, right, and Grace. Sometimes they walk to the library, and they read books virtually every day. Cavanaugh, a senior military strategist, is a West Point graduate and works at NORAD. He’s brought in a bunch of military and intelligence people to do a collection of essays comparing modern war with Star Wars. 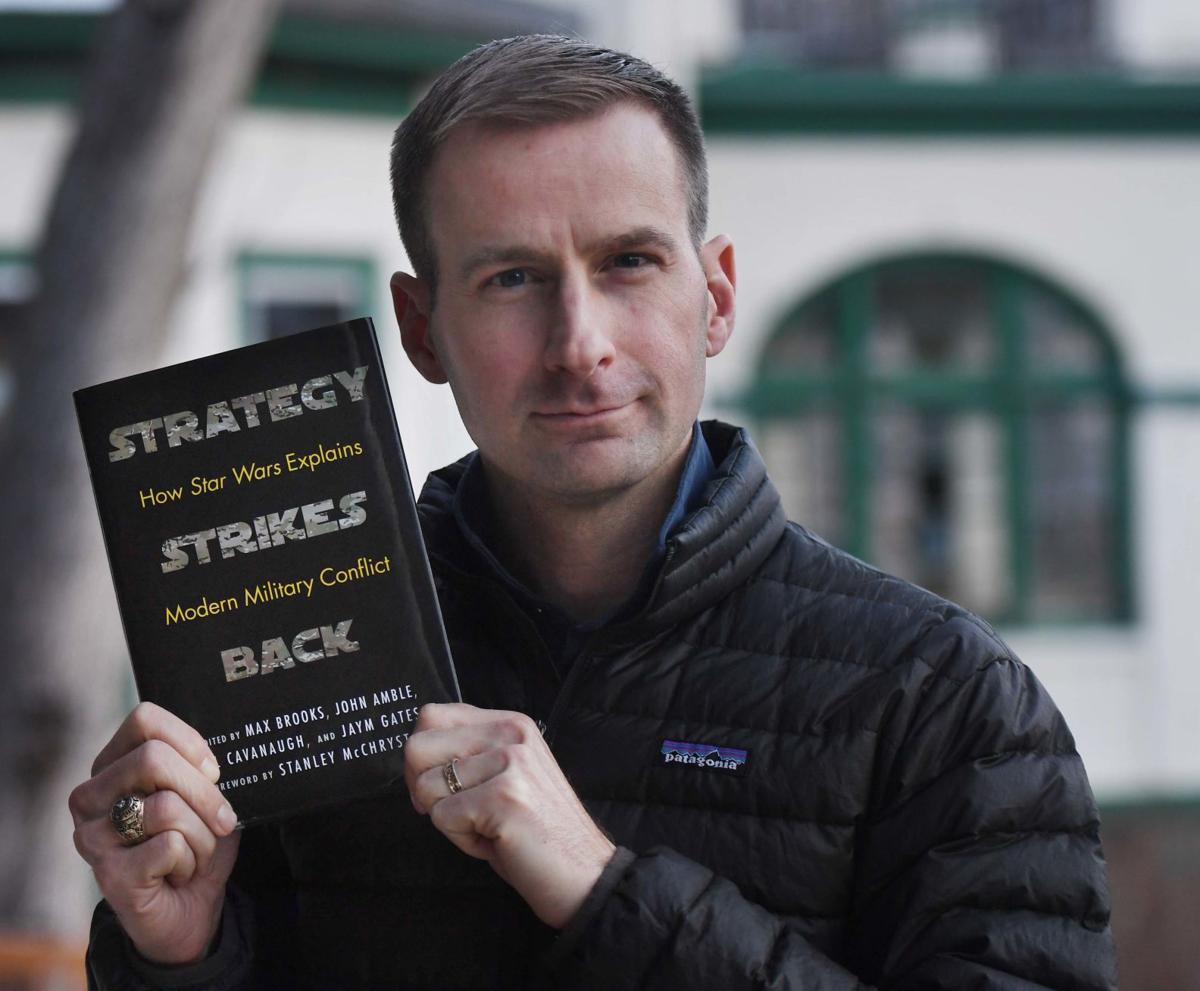 Matt Cavanaugh is a senior military strategist, a West Point graduation and works at NORAD. He’s brought in a bunch of military and intelligence people to do a collection of essays comparing modern war with Star Wars.

Matt Cavanaugh was caught in a holding pattern, as it goes for American military personnel leaving a place like South Korea. He had spent most of 2015 and some of 2016 away from his wife and two young daughters, and he had to wait a few more days before finally returning home to Manitou Springs.

“You’re just in a crummy hotel room doing nothing,” he says.

So the time was perfect to delve into a new project that had come to mind over the past year: a book comparing modern war with “Star Wars.”

It was an unlikely idea, especially considering the events that unraveled during his deployment. At a time of artillery exchange, at a time when two South Korean sergeants each had a leg blown off, how could the mind drift to a galaxy far, far away?

But Cavanaugh’s mind has always wondered. That is, after all, part of the lieutenant colonel’s job at North American Aerospace Defense Command, the underground outpost of Cheyenne Mountain.

“At NORAD, we’re often contemplating things that have not come to pass. In a lot of ways, we’re dreaming up fictions and then figuring out how to counter them before they ever become real,” Cavanaugh says. “Which is not all that dissimilar from the script of a film or the words in a fiction novel.”

And Cavanaugh always has found time for side projects, whether historical research, an op-ed or essay. At West Point, he started a think tank, the Modern War Institute, alongside John Spencer.

“He reminds me of one of these McChrystals,” Spencer says, referring to retired four-star Army Gen. Stanley McChrystal, who commanded U.S. forces in Afghanistan and is known for his regimented lifestyle.

“They run like 10 miles a day, read this, write that. ... It’s like he doesn’t sleep. He’s just constantly learning about himself and continually producing.”

During one early morning run in Korea, Cavanaugh was listening to a podcast with Randall Munroe. The cartoonist and physicist explained his attempt to get kids interested in the sciences with the help of Yoda: Using gravitational constants provided by Wookieepedia, Munroe’s class concluded the level of force required to pull Luke Skywalker’s spaceship from the muddy waters of Dagobah.

And then it clicked for Cavanaugh. As an Army strategist insistent upon explaining warfare to civilian society — like a mathematician before a bored classroom — “Star Wars” could help. It made sense right there in Korea, where foreign counterparts weren’t all that familiar with wars abroad, historic and present.

“But they all knew about the rebels and the Empire,” Cavanaugh says.

That’s the same for people across generations back home, he figured. “Star Wars really is the universal war. ... That’s what makes it so useful and powerful to use as a device to have a conversation about real issues.”

And coming this spring, the next in the anthology: “Winning Westeros: How Game of Thrones Explains Modern Military Conflict.” The book is set for release after the HBO show’s highly anticipated series finale, beginning in April.

Contributors this time include retired Admiral and NATO Supreme Allied Commander James Stavridis. For his part, Cavanaugh draws on the Night’s Watch, who from their wall send warning of a destructive army marching on.

“Nearly nobody listened,” he writes, asserting that’s to do with the socio barrier between the soldiers and the rest of the realm. The wall could represent the same invisible divide in America, Cavanaugh proposes.

“Here, instead of a ‘Wall,’ though, when we describe the distance between civilians and soldiers, academics prefer a term like ‘the gap,’” he writes.

Back to edit “Winning Westeros” is Max Brooks, whose hit zombie book, “World War Z,” landed him surprising spots at military conferences and study groups. Cavanaugh admired his thinking and asked him aboard “Strategy Strikes Back.”

Brooks called himself “a tourist in this world” while talking about the book last summer at the Commonwealth Club, the prestigious public affairs forum. He referenced a chapter by a former senior military strategist, who argues that the Jedi became too elite, insulating themselves from the republic.

“And so when a big crisis came, the republic didn’t know what to do,” Brooks said. “The Jedi simply didn’t have the numbers, and they didn’t have the public outreach, and that’s happening today.”

John Amble is another editor on the project. He’s the editorial director at the Modern War Institute who, like Cavanaugh, deployed to the Middle East in the war’s early years.

Bridging “the gap” is one intent of the books. But there’s a personal aspect, too.

“I think especially for people who have been operationally active over the past couple of decades, it’s been tough. It’s been tough because we don’t really know what victory looks like,” Amble says.

“So using science fiction or a blockbuster television series, I think we’re kind of just searching for any tool to better understand these conflicts that, frankly, we’ve struggled to understand even when we’ve been in the midst of them.”

Out of high school in Minnesota, Cavanaugh wanted to go to a liberal arts college in a little town that had a welcome sign reading: “Cows, Colleges and Contentment.”

But West Point offered him a hockey scholarship, so off he went to New York.

“It was a horrible four years, it really was,” he says. “It’s not a pleasant place to go to school. But it was meaningful. It opened doors to me that I really enjoyed passing through.”

He pauses for a moment. “Some of them were frankly horrible.”

On Sept. 11, 2001, he could see the smoke from campus. He knew his fate was sealed before graduation the following summer, reinforced only by the words George W. Bush spoke at the ceremony. “... History has also issued its call to your generation … Our war on terror is only begun …”

Cavanaugh was deployed to Iraq the next year, in 2003, his unit arriving right after the invasion. “Which seemed fortunate at the time,” he says.

But they were stationed west of Baghdad, where the fighting raged. He lost classmates, commanders, subordinates. He lost more on his next deployment in 2005, just months after the first.

“I can see their faces right now,” Cavanaugh says, driving home one recent day from NORAD. “It’s the question that never gets answered, or the gap that never gets filled. Why them? Why were we there doing this?”

Back home in 2007, he started down another path, the one he thought he’d take before West Point: He went to law school. But within a year, he felt out of place and left.

And so he returned to his path of understanding. The Army sent him to New Zealand to pursue his masters in strategic studies. Just last year, he achieved another degree.

“My Ph.D was on supreme military command. It was on war,” he says. “So, personally and professionally, my curiosity is how war almost has no end. Because, see, my most jarring experiences in life happened in 2003 and 2005. Those first few years in Iraq when I was 24 and 26. It’s almost as if it was so disorienting that 10, 15 years later, I’m still trying to understand what the heck that was all about.”

What he’s learned is that suffering continues.

The war in the Middle East goes on. Innocent Syrians are dying. Nuclear threats persist. This “is an age when deadly technologies become less expensive and more destructive — insanely cheap and ridiculously powerful,” Cavanaugh writes in “Winning Westeros.”

Does “Game of Thrones” offer any hope? he shrugs. Hard to say.

But like everyone else, he’ll watch the last season and root for a happy ending. A lot of bad things have happened, and it seems they’ll continue.

But Cavanaugh has hope. As he writes at the end of his chapter: “The good guys usually do win in the end ...”

DENVER • Outdoor Retailer’s winter extravaganza returned to the Mile High City for a second January since the move from Utah, where tradespeop…