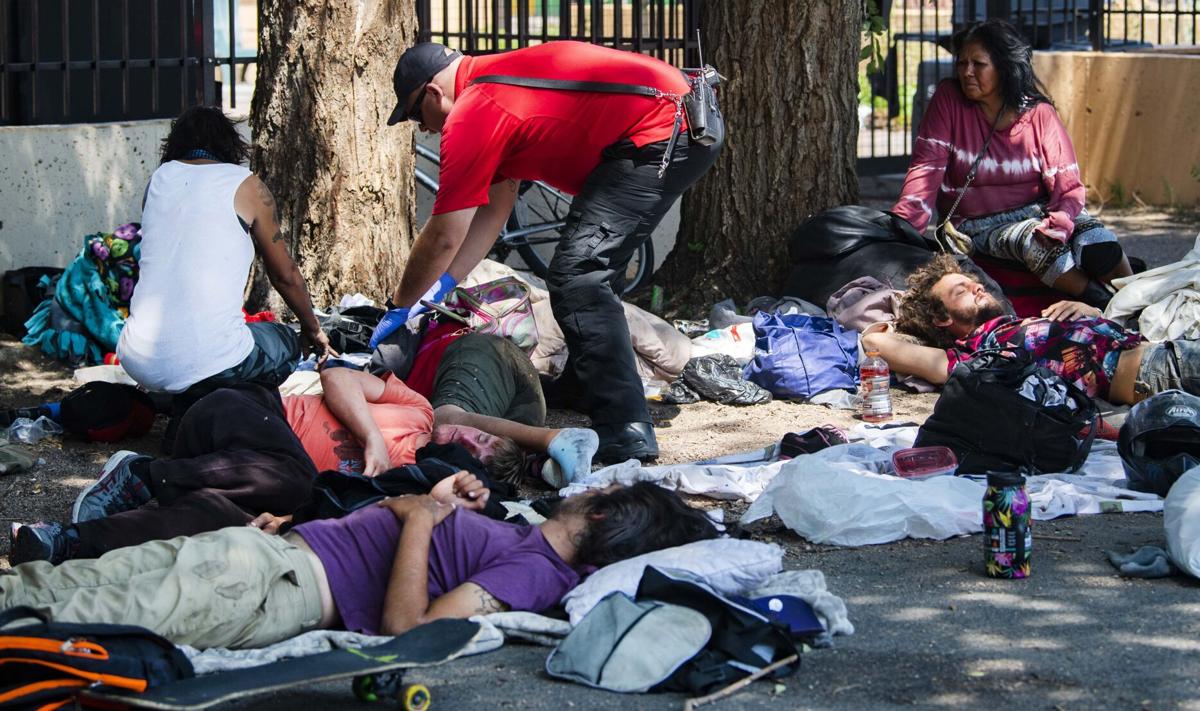 Paramedic Scott Essigmann checks on a woman who was passed out in Dorchester Park Wednesday, July 28, 2021. Essigmann and Steve Gold, a behavioral health clinical navigator, are members of the Colorado Springs Fire Department’s Homeless Outreach Program and were at the park to meet another homeless man who was ready to get off the streets and enter a treatment program for substance abuse. The HOP team treated the woman until firefighters arrived at the scene. The woman was transported to the hospital. (The Gazette, Christian Murdock) 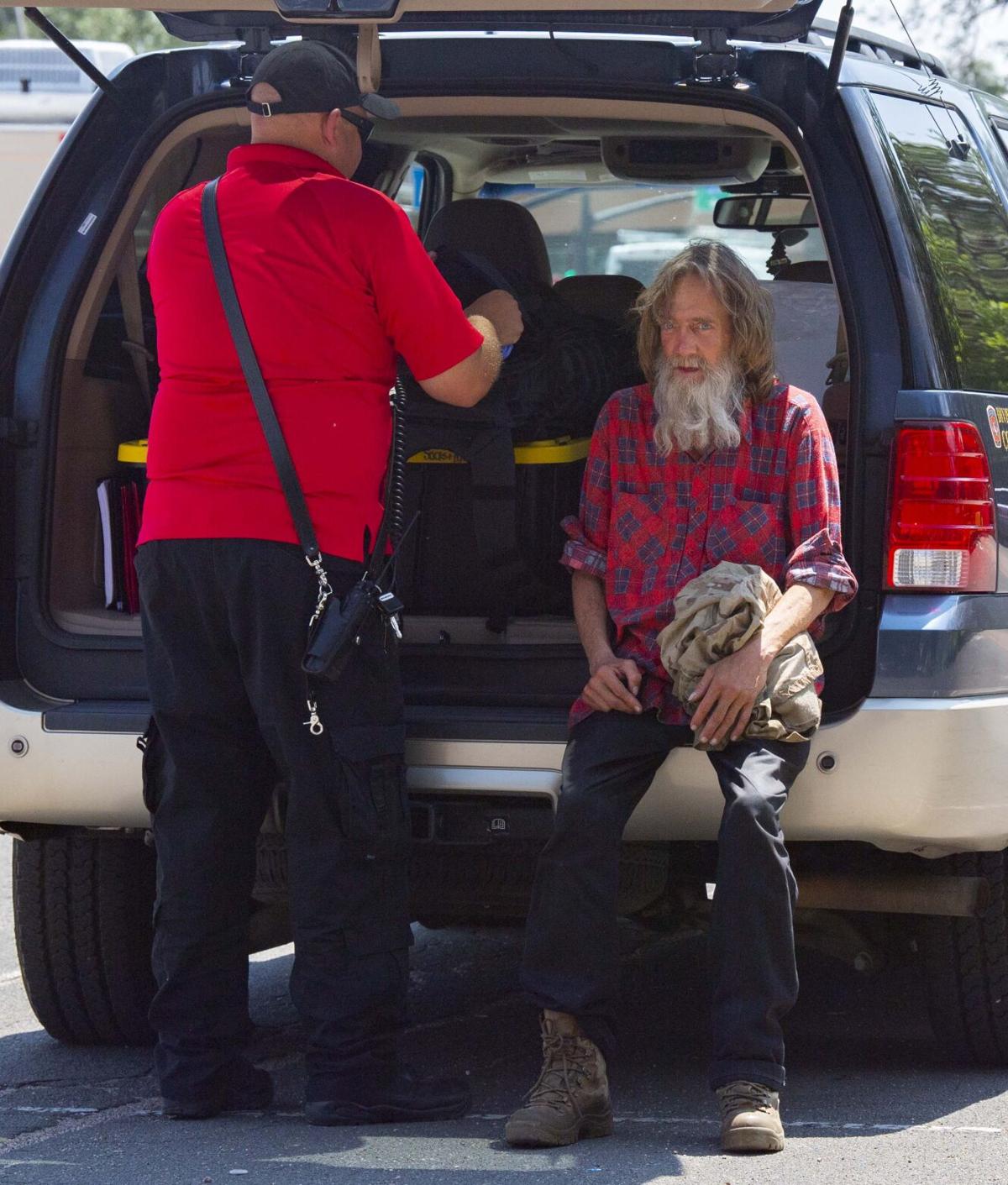 Paramedic Scott Essigmann exams William Fox, 60, in Dorchester Park Wednesday, July 28, 2021, before arranging an ambulance to take the homeless man to a detox center and then to treatment program for substance abuse. Essigmann and his partner Steve Gold, a behavioral health clinical navigator, have been working with Fox since the January. (The Gazette, Christian Murdock)

He swung his dangling legs as a paramedic checked his vital signs and asked questions about his health.

“I’m ready,” he said, exhaling a long breath. “I’m just tired of being out here.”

Fox sleeps on a bus bench south of downtown and relies on free meals and other services for the homeless to get by.

He wants to find an apartment and a job, but amphetamines and alcohol are vices he's decided he cannot overcome on his own.

Fox says he has seizures when he tries to stop. So he’s voluntarily going by ambulance from the park to a local hospital before entering a treatment program for substance abuse.

Fox, 60, said he wouldn’t have made it to this point, though, without assistance from the Homeless Outreach Program of the fire department's Community and Public Health Division.

Paramedic Scott Essigmann and Steve Gold, a behavioral health clinical navigator, have been talking with Fox since January about going into recovery.

They and another team of two have helped hundreds of homeless people navigate the complicated system and fix issues that keep people from moving off the streets.

Those include: getting an identification, birth certificate or Social Security card; signing up for food stamps, social security, disability income or pension; getting on a waiting list for housing or assisted living; obtaining bus passes and medical appointments; meeting with case workers; and dealing with outstanding court cases.

“They’re very kind people and help you get in the system,” Fox said. “They’ve directed me to places to get help and I’m very grateful. They’ve definitely got a passion for their work.”

The pilot program grew out of the city’s 2019 homeless initiative, a multi-pronged plan to increase the number of shelter beds, camp cleanups and outreach, and improve services.

Numbers show the theory behind the approach is proving to be correct, said Andy Phelps, the city’s homelessness prevention and response coordinator who came up with the idea.

Providing nonjudgmental, non-punitive outreach has built trust among the homeless population, he said, leading to decreased crime and increased life progression among chronically homeless who have been identified as “super utilizers” of emergency calls with high criminal behavior.

Since the program began in mid-2019, Colorado Springs police issued 71% fewer tickets for illegally trespassing, camping in parks, urinating or defecating and other common infractions, among a cohort of 20 homeless people who were flagged for such behavior in the past, Phelps said.

Tickets or arrests of those individuals dropped from 156 to 45 over six quarters from the summer of 2019 through 2020, according to statistics.

And seven of the 20 people targeted for assistance are now housed, Phelps said, not only because of the fire department’s efforts, but also the network of homeless service providers who work in collaboration with the teams.

"The answer to homelessness is housing and services, and not just more tickets," Phelps said. "I understand enforcing our camping ban and other ordinances — they have detrimental effect on the community and the environment — but I think we need to look further downstream and have less myopic view and implement evidence based practices that have been proven to be effective."

Tickets and arrests decreased even more substantially among a second cohort of 10 individuals who had previous records of criminal behavior, dropping from 89 to seven arrests or tickets, from the fourth quarter of 2019 through 2020, according to statistics.

“One thing is clear: Whenever the homeless outreach program targets people with navigation services and gets them signed up for housing, we see a drastic decrease in police interaction with people who before were at the top of the list,” Phelps said. “That’s taxpayer dollars saved and time police have to respond to more serious crime.”

The program costs about $375,000 per year for the two teams. Grants primarily have funded the program, but Phelps hopes going forward the program will become part of the city's general fund.

Out of monthly meetings with city, county and downtown business representatives came the need for  homeless outreach beyond what the community provided, Phelps said.

“People were being made to feel uncomfortable shopping downtown because of some behavioral-type issues they were witnessing,” he said.

The Downtown Development Authority kicked in $50,000 to launch the program.

“Before the Homeless Outreach Program, our merchants had no one to call when they saw someone who was troubled and needing aid,” she said by email.

“The kind of intense, one-on-one relationship-building and listening provided by the Homeless Outreach Program team is a deliberative process that is reaping results in the long term.”

“We to get them back on track and help people’s quality of life improve and make the community safe,” she said.

“Some weeks we get a couple people into housing, and some weeks we’re called to the morgue to identify a body,” Gold said.

Some days they’re dealing with maggots in boots and other days they’re picking up mail at the soup kitchen and taking it to someone who’s holed up in a corner of a sidewalk. Other times, they're waiting on hold for an hour on the phone to find out the status of someone's application for a Social Security card.

An estimated three-quarters of people living on the streets have mental health problems like schizophrenia or bipolarism and overuse drugs. Alcohol is the main drug of choice, Essigmann said, although meth also is popular.

“Addiction is very frustrating,” Gold said. “You do a lot of work, they do a lot of work, and they might relapse. But, hey, maybe it’s four weeks they had sober. They got a taste of sobriety and know what it’s like to get self-respect back and into clean clothes. It’s a step.”

Many of the homeless also are grieving the loss of a career or job, their families, their identity, their possessions and some might say their dignity, Gold said.

“We’re trying to re-establish some dignity,” he said.

In the minutes before Fox decided it was time for him to enter drug rehab, a group of homeless people sitting in the shade in the parking lot of Dorchester Park motioned the team for assistance.

A homeless woman lying on the ground had “limited response,” and Essigmann tended to her, as he waited for an ambulance to arrive.

“She’s my street mama,” said onlooker Shellie Rosentreader, who lives among the group of 15 to 20 homeless people that the woman hangs out with.

Rosentreader said she rolled the woman over on her side, when she noticed she was foaming at the mouth.

“We take care of each other,” she said.

Rosentreader is familiar with the fire department’s outreach team, and said she appreciates their helpfulness, since being homeless “sucks.”

But getting off the streets can be “a losing battle,” she said, with the amount of government bureaucracy and paperwork.

“If you don’t have an ID, it’s so hard to get anything done,” agreed Bryan Humphrey, who also lives with the group.

The outreach team comes across an emergency situation nearly every week, Gold said.

“In the last couple of weeks because of the heat, that’s increased these types of situations,” he said. “We don’t like to wake people up, we respect their privacy. But with these temperatures, we’ll see if they’re breathing, or in distress, and if they don’t look good, we’ll wake them up and help them.”

'Bending on both sides'

Despite the efforts, issues regarding the homeless remain one of the top complaints the city receives, Phelps said.

He’s not sure why. Enforcing laws that prohibit such activity as camping in city parks, along rivers and on other public property is “increasing exponentially” every year, he said.

Emergency shelter beds have increased for individuals and families, and programs are continually improving, he said.

“We’re trying to do all we can to get people connected to services,” Phelps said.

Still, “homelessness is visible in our community,” he said.

Just as residents don’t like people camping in public, homeless people don’t want to sleep on trails, sidewalks or benches, said Lawrence R. O’Daniel, who two weeks ago got into a transitional motel room after two years of waiting for housing.

“But we’re gonna sleep somewhere,” he said. “It’s a necessity.”

The team stopped by the motel to remind O’Daniel, 57, about an appointment for housing he had the following day.

“It’s difficult being on the streets in Colorado Springs,” O’Daniel said. “I understand the city’s position and what the community’s saying, and I understand our side of it because I’m living it.”

Playing "hardball" with the homeless isn’t the answer, O’Daniel believes.

“We’re not homeless, we’re just houseless,” he said. “Home is wherever we are, and the Supreme Court has made decisions on our behalf, like the cops can’t just through your bags or poke their head into your tent. We have rights, too.”

Most end up homeless through adverse situations such as divorce, abuse, illness or other catastrophe, Gold said. A small number choose to live on the streets because they don’t want to have bills or pay taxes, or they like to camp, he said.

“It’s not a quick fix,” Gold said. “There’s a lot of barriers that can trip them up. They may have to take two buses to get to one appointment and panhandle for the bus ticket because they didn’t get a voucher that day.”

O’Daniel’s immediate goals are to stay out of jail and continue on the path to housing. He dreams of getting his teeth fixed and starting a nonprofit organization to unite the homeless and the community at large using a “happy medium” model he said he’s working on.

“Everybody’s got to work together instead of pointing fingers,” he said. “Walk in our shoes for a month. That’ll open everybody’s eyes. It’s going to take some bending on both sides.”

Steve Handen, the 'conscience of Colorado Springs' leaves a legacy of work for the homeless and the poor

Steve Handen, who founded the city’s first soup kitchen and other long-lasting endeavors to give the homeless and the destitute a chance to su…