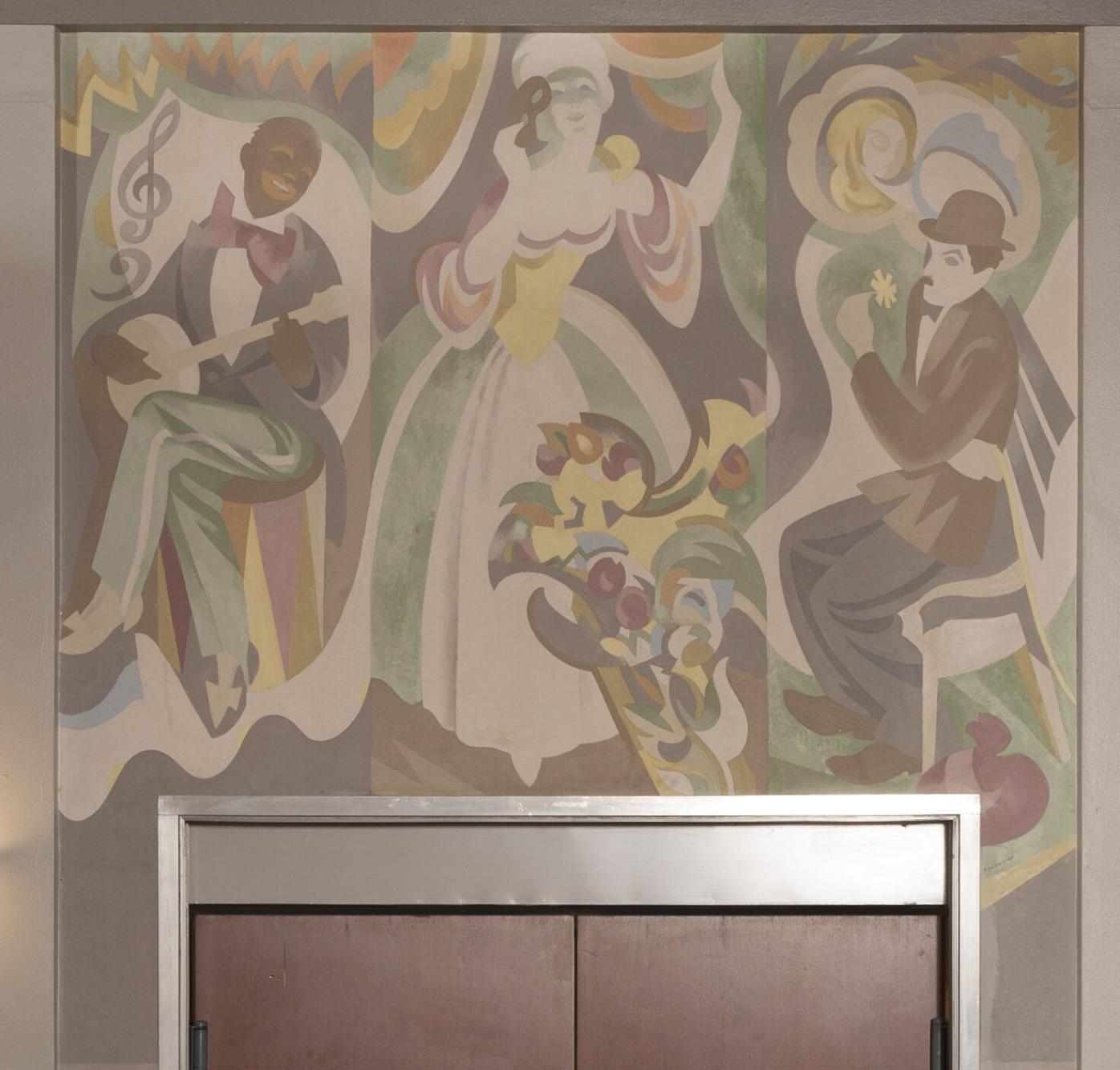 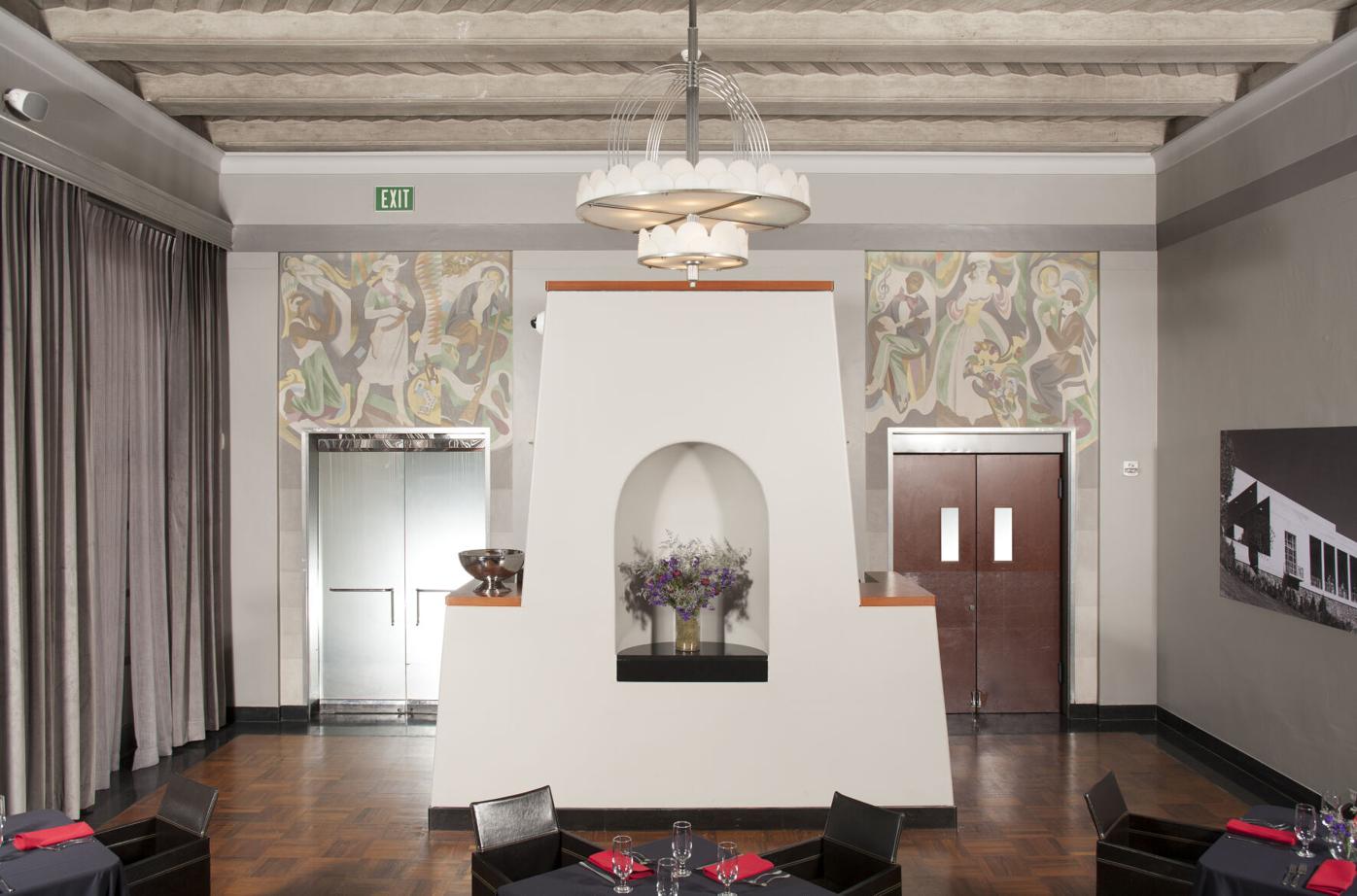 Two Ward Lockwood murals are at the center of controversy at Colorado Springs Fine Arts Center at Colorado College. The

murals, painted in 1935 and revealed when the FAC opened in 1936, feature two Black figures — a grinning minstrel playing a banjo and a slave on his knees with a white angel above, representing the main character in a theater production based on Harriet Beecher Stowe’s 1852 anti-slavery novel, “Uncle Tom’s Cabin.” 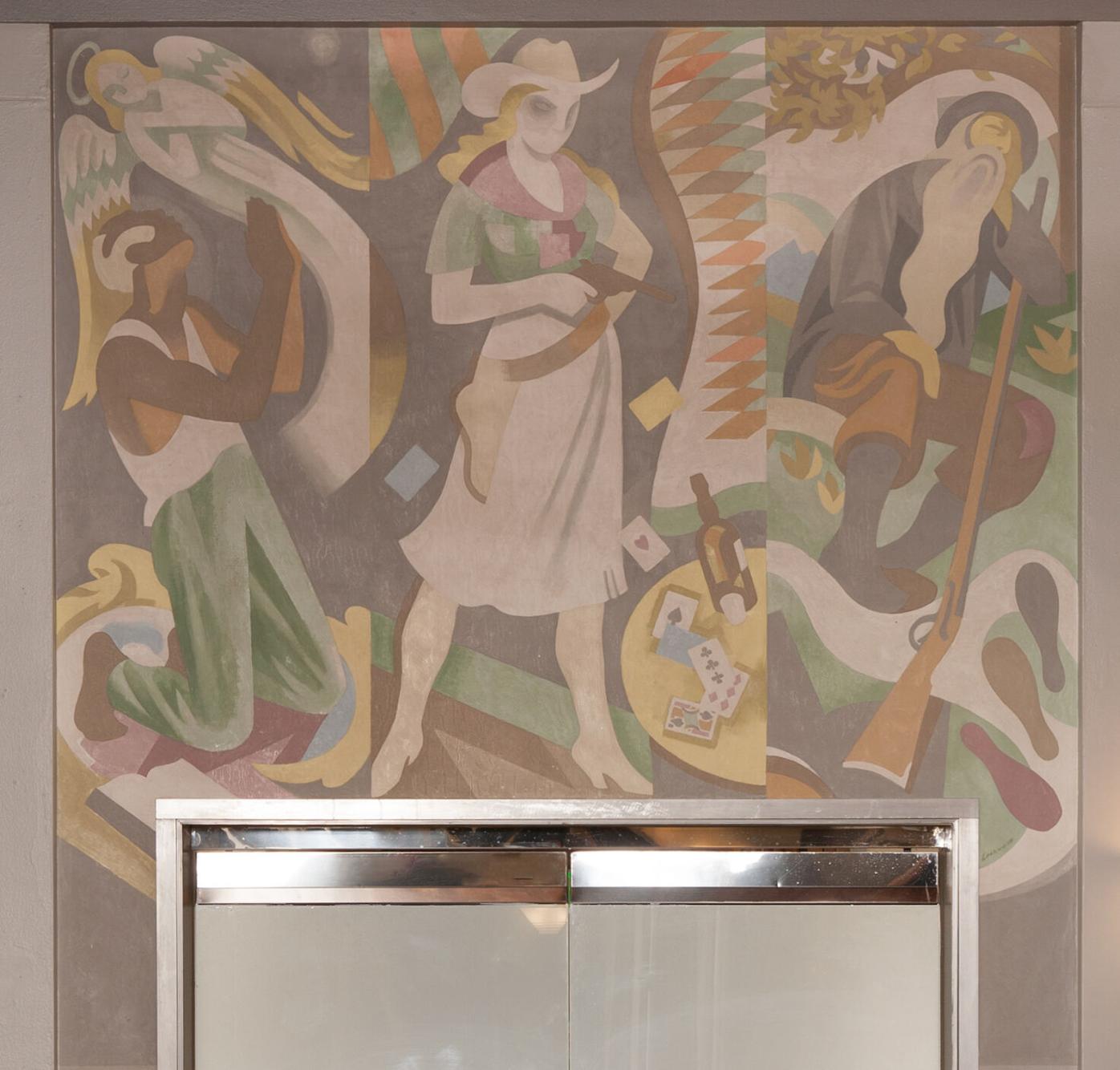 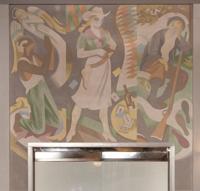 Painted in 1935 and revealed during the FAC's grand opening in 1936, the art deco-style works will be taken down due to racist imagery and damage accumulated from their location in a food service area. The timeline for removal is unknown, but depends on a timeline from a conservator, said FAC's Director of Visual Arts and Museum Michael Christiano.

The works feature two Black figures — a minstrel playing a banjo and a slave on his knees with a white angel above, representing the main character in a show based on Harriet Beecher Stowe's 1852 anti-slavery novel, "Uncle Tom's Cabin."

"I’d never want to show work that advanced a racist agenda," Christiano said. "It is our responsibility to understand how racism operates in the visual arts, and how we can better do our work in order to become a more anti-racist institution. In this instance, someone in Blackface is a force of dehumanization for Black people. It’s our responsibility to engage with that history and not cause harm in showing work to someone who might have experienced that form of racism or dehumanization."

Jim Raughton, former Chair of the Trustees of FAC and longtime philanthropist, who has promised to leave an endowment and art collection to the museum, disagrees that the murals are racist and damaged enough to be removed. He wants to see the works remain on the walls, and contextualized with two accompanying written statements on how to view them. One statement would explain how the murals can be viewed as racist and the other would explain how to see the historic murals within the context of the time in which they were painted.

"That would lead to a teachable moment," Raughton said. "Lockwood was arguing for the inclusion of Black culture in this new magnificent theater. This is a guy who wasn’t trying to be racist as they have implied these murals are. They do depict two scenes offensive to some people. It was a brand new modern theater and four artists were invited to do murals. He was the only one who went out of his way to include African Americans in one form or another."

At an October Curtain Call event, a membership group at the FAC that gets together for dinner and a performance-related conversation before watching the show, Raughton asked for the murals to be unveiled so attendees could judge for themselves whether the imagery was racist.

Security was called for what staff deemed inappropriate behavior, and Raughton was escorted out of the building. He is banned from the FAC and CC campus until he offers an acceptable apology, the college said.

Both murals are located on the north wall of what was originally the FAC theater lobby, but is now Taste, a currently closed restaurant. The murals are covered and unavailable for public viewing. After the murals are removed and restored, there is no immediate plan to reinstall them. They will be placed in the museum's permanent collection and treated like other objects — available for research and reinstallation.

"Our understanding of racial dynamics has evolved over time, and it's incumbent upon us to understand how works of art produced in this time period relate to our current moment and sensibility of anyone who might come into the FAC today," Christiano said. "It is a work of art and we retain curatorial purview to put up and take down works of art in relationship to what we’re trying to achieve in our program."

Raughton calls Lockwood a progressive artist who participated in the Works Progress Administration (WPA) mural projects during the '30s, and whose work was noted for including minority groups and their contributions to American culture, as well as references to their repression. After painting the FAC murals, Lockwood traveled to Taos, N.M., where he had been commissioned to paint a set of murals for the Taos courthouse dealing with the oppression of Hispanics and American Indians, and became a member of the Taos Artist Society, a progressive modernist school of art.

"I have long since recognized that 'Justice for All' is a goal of our society that has not always been realized. It is my belief that the root of prejudice is the condescension that one group directs toward another based on inaccurate and incomplete information. It is my belief that this has been recently applied to the murals of John Ward Lockwood," he wrote in the summer edition of the journal.

The murals first came into question during a town hall meeting in 2018, where attendees expressed mixed opinions about what to do with the works. At the time, it was believed the works were frescoes and permanently attached to the wall — to remove them would be to ruin them. It was decided the works would be covered.

"These coverings are temporary while we investigate thoughtful alternatives to address the problematic imagery in these murals. We do not seek to whitewash the past, or the present; rather, we commit to grappling with and understanding our history while at the same time upholding values of justice, equity and inclusion. The presence of these two murals in our restaurant, a public space of gathering and community building, counters the FAC's work toward creating a welcoming and inclusive environment for all," reads part of a gallery guide for patrons inside Taste.

In August the conservator hired to assess the condition of the murals found the works were painted on canvas and applied to the walls, meaning the works could be safely removed, cleaned, preserved and placed in the permanent collection. It was decided to go ahead with the removal.

Raughton believes the murals can be restored where they are, and that they are being removed solely due to the imagery. He believes the FAC museum committee, an advisory group that helps monitor the museum's collection, was given no say in what happened.

"It's one thing to cover them and another to remove them," Raughton said. "This is an executive or administrative decision. That the removal is for restoration is their justification. Like other murals we’ve restored, you just go up and do it. You don’t have to remove them. It’s a device to get them down."

Blake Wilson, The Art Bank & Oriental Rug Center co-owner and a member of the FAC museum committee, has been part of several discussions about the murals. There is no vote by the committee to take action one way or the other, he said. Decisions about the museum's accessioned works of art are made by curatorial and administrative staff members.

"I support and understand their rights to do so," Wilson said about removing the murals. "Like many works executed in the '30s, the murals represent images commonplace at the time, but are offensive to many today. They are part of our history and deserve to be preserved and conserved. The manner in which they are exhibited is up to curators now and in the future."

The museum and CC, which assumed management of the FAC in 2016, are working to become anti-racist institutions, Christiano said. And the murals are an example of contending with a complex history. It's not an issue unique to the FAC. Many museums are now working to address problematic imagery in their collections. Colorado Springs Pioneers Museum Director Matt Mayberry called it a challenging time.

It’s probably no surprise to see cat videos on social media, but what about “CATS” videos?