The city of Colorado Springs is planning to support one multicultural event out of about 40 events and tourism attractions planned for next year that received money this week — a disparity that Councilwoman Yolanda Avila says shows the city is not working hard enough to reach diverse groups.

Avila said she did not think the city was intentionally excluding people of color or other diverse groups from funding opportunities from the Lodgers and Automobile Rental Tax revenues, which are intended to fund events that draw tourism and support the community. But it could do better to ensure the money supports more multicultural events that celebrate its diverse groups and bring people together, she said.

"We have to change our outreach. ... Whatever we are doing right now, it’s not working," she said.

The one multicultural event to receive funding this week, Fiestas Patrias, a downtown street festival to celebrate Hispanic culture, received $10,000 of the $40,000 it requested. The festival would be held for the first time next September and it's possible all the funding it received will go back to cover city services like police and barricades, Avila said. Fiestas Patrias commemorates Mexico's independence from Spain and a large event is held each year in Denver to mark the occasion.

Event organizer Moni Hernandez expects the Springs festival will feature, food, music and dancing and draw people who would otherwise make the drive to Denver.

Avila called the $10,000 for Fiestas Patrias a drop in the bucket compared to the overall tourism-funded expenses and voted against the distributions. Councilman Bill Murray joined her.

The council approved about $1.3 million in LART funding for events and tourist attractions this week, according to the budget. Much of the LART money, $4.4 million of the $7.8 million budget, goes to fund the regional tourism office, VisitCOS. 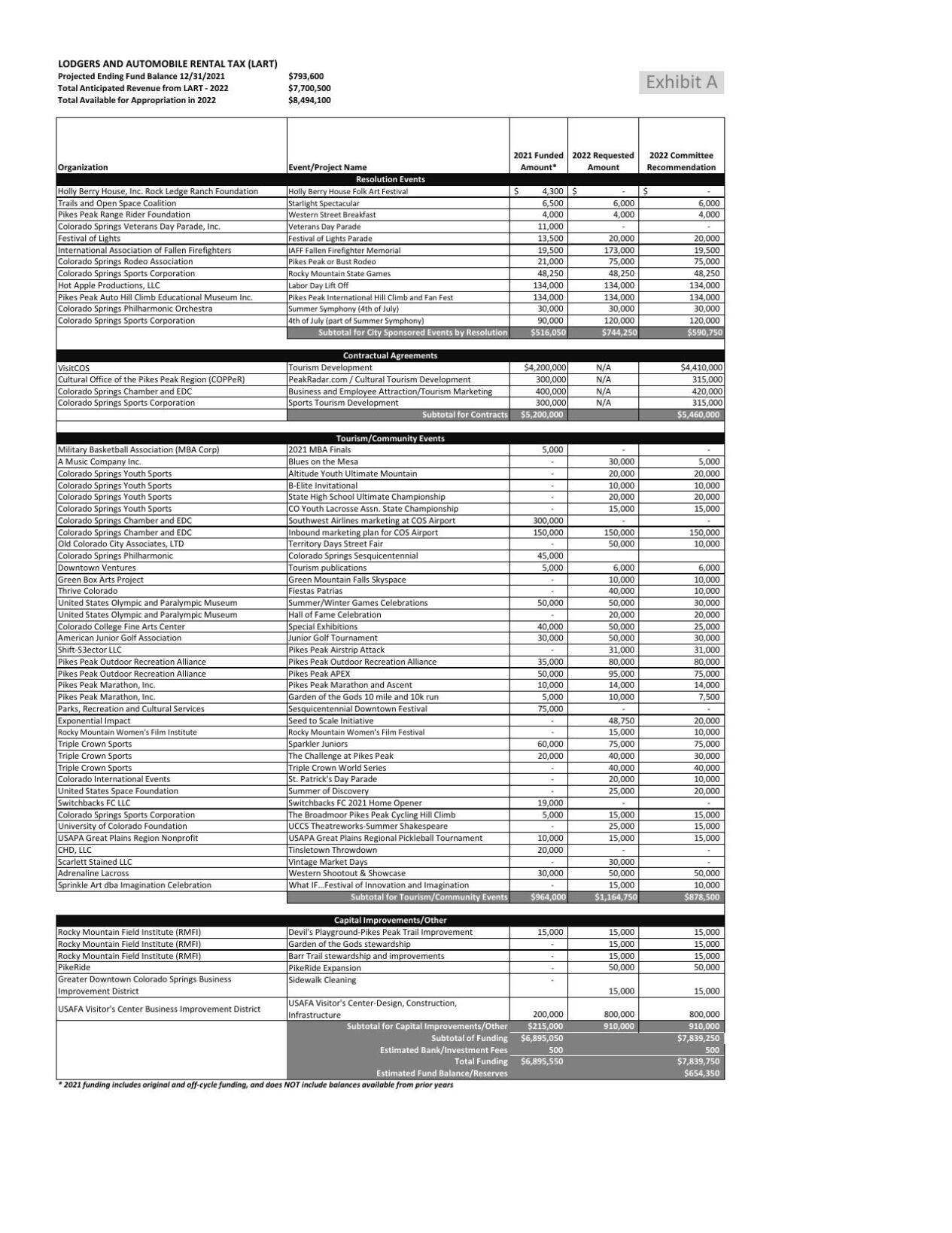 Councilmen Wayne Williams and Dave Donelson said the spending on events was carefully weighed by an advisory committee focused on bolstering tourism and the events are not exclusive.

"Everyone is invited to these different events," Donelson said.

Some of the most well-known events include the 4th of July fireworks, Labor Day Lift Off, the Pikes Peak or Bust Rodeo and the Pikes Peak International Hill Climb.

Avila noted that during the 4th of July Symphony On Your Porch event, no locations were set up in southeast Colorado Springs

LART advisory committee Chairwoman PK McPherson said awareness in the community about the availability of tourism-funded tax revenues is likely at the heart of the problem. The committee is responsible for reviewing applications for funding and recommending how much events and attractions should receive, not recruiting applicants.

"We had very thoughtful discussion about everything to make sure we were using the money as responsibly as possible," she said.

She noted the committee has funded the Pride Parade and dragon boat festivals in the past, but had not received applications for them in recent years. The committee supports events, such as sports competitions, that bring people to town to increase tourism spending, but the committee also supports more community-oriented events.

"We do fund a few community events because they are part of that greater tapestry," McPherson said.

If questions about the equity of the spending are coming up, they should be addressed, she said.

The city could use LART revenues to promote the opportunities to apply, with City Council approval, city spokeswoman Jamie Fabos said.

A dispute between factions of the El Paso County Republican Party over whether to ask school board candidates to answer questions about election integrity and voting equipment ramped up this week, with one party officer resigning, another finding his official party email address had been disabled and the county party distributing two competing sets of candidate questionnaires.