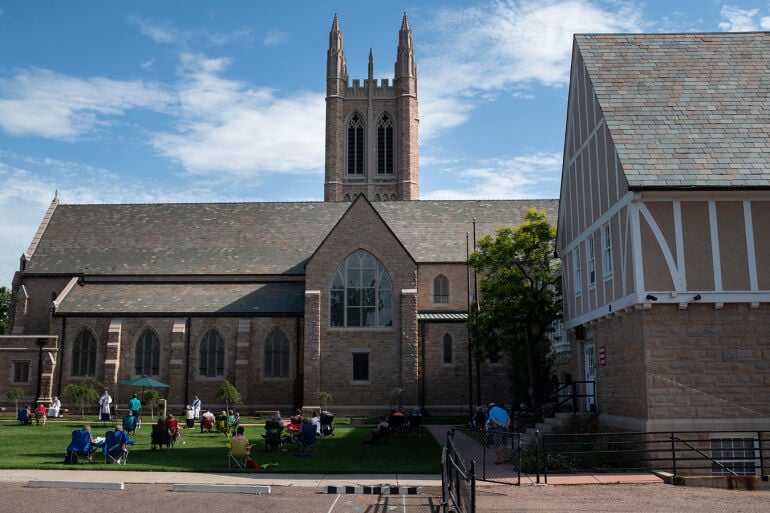 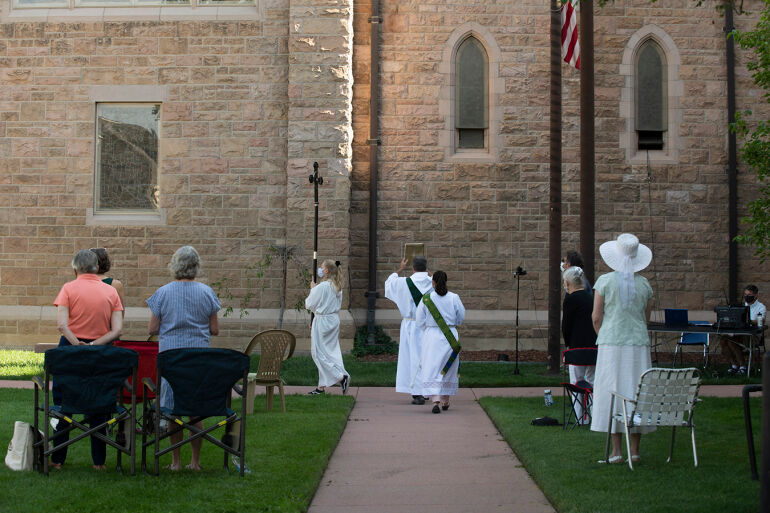 Abigail Sena, center left, leads the procession as an acolyte followed by Gary Darress, a deacon, and Claire Elser, a curate, during worship services in July.

Abigail Sena, center left, leads the procession as an acolyte followed by Gary Darress, a deacon, and Claire Elser, a curate, during worship services in July.

The lights dimmed. Guitars thrummed. And a nine-piece band kicked off what amounted to a rock concert inside an amphitheater of a church. “Shout for joy to the Lord,” one musician called out, quoting Scripture.

Any such shout could release the coronavirus to congregants. With some 500 people singing along, though, any concern about a deadly virus circulating was hard to find other than the spaced-out chairs in the 6,000-person hall. Although Colorado’s governor had issued a statewide order days earlier mandating masks, hardly anyone at this service at New Life Church obeyed.

“I’m finding this to be true at churches all over America: If they’re told they have to wear a mask, they’ll stay home,” said Brady Boyd, senior pastor of the 15,000-member New Life Church, a nondenominational megachurch that meets in five locations in Colorado Springs and across the Pikes Peak region.

Long considered one of the country’s evangelical strongholds, Colorado Springs returned to church in ways both guarded and full of gusto after the state lifted lockdowns June 4 with limitations on how many people could gather indoors. But as the county’s coronavirus cases and hospitalizations climb to their highest levels in months, many of the city’s largest and most well-known congregations remain undeterred — openly flouting the new statewide mask order and, in at least one instance, threatening not to stop holding in-person services again if ordered.

It all comes as church leaders across the nation navigate a growing set of political pressures. For months, President Donald Trump urged them to resume services despite pleadings from public health officials for caution and orders by some governors to stay home.

That pressure is particularly acute here at the base of Pikes Peak. Long the conservative bastion of Colorado, this city and surrounding El Paso County, home to about 720,000 people, overwhelmingly voted for Trump in 2016. (The county last voted for a Democratic candidate for president in 1964.)

The Republican sheriff has vowed not to enforce the statewide mask order that Democratic Gov. Jared Polis issued July 16. And several churches are as openly defiant.

But any indoor activities, such as worship services, pose a particularly high risk for coronavirus transmission even with masks, especially when they include singing, said Dr. Jonathan Samet, the Colorado School of Public Health’s dean. While coughing or sneezing can spread larger respiratory droplets, singing and talking release smaller infectious particles that can hang in the air and circulate in enclosed spaces.

“The circumstances of having large groups of people together without masks and doing things like singing is a setup that people talk about for superspreading events,” Samet said.

In Arkansas, for example, at least three people died and dozens of others tested positive in March after two people showed up at a church function with COVID symptoms. And in Washington state, dozens of choral group members were infected after a single symptomatic person attended a 2½-hour practice. Two people died.

New Life Church, where at least nine in 10 parishioners went without masks on the first Sunday after Colorado’s order began, was certainly not unique. Nearly all of the roughly 100 people gathered at Church for All Nations also skipped masks.

Its pastor, Mark Cowart, kicked off his sermon by questioning statements about masks from Dr. Anthony Fauci, the nation’s top infectious disease expert with the National Institutes of Health.

“We are not the mask police,” Cowart said, before warning state officials against trying to restrict their gatherings.

“If they come trying to tell us we can’t meet anymore, or we can’t sing, or we can’t have a Bible study anymore, that’s not going to go,” Cowart said to applause at the nondenominational church. “God does not want us to allow that to happen.”

Colorado health officials recently warned several counties that large worship services could be restricted if the rise in infections doesn’t ease. Average daily confirmed cases across the state more than doubled in July, rising from 215 a day in June to 451 as of last week, according to a state database.

The rise in COVID cases comes as residents disregard social-distancing guidelines. A recent report by the Colorado COVID-19 Modeling Group found that the share of Coloradans complying plummeted from 87% in May to 41% in late June.

Across the Pikes Peak region, dozens of pastors and parishioners described an intense and deeply spiritual desire to return to worship with their fellow believers. Meeting in person provides a unique opportunity to hug, to know they are not alone during such trying times.

“The church isn’t really a place — it’s a gathering of people,” said Brian Bone, while meeting with a dozen others at Woodmen Valley Chapel, where masks were common on a recent visit. “We get comfortable coming to a place we call church, but really it’s being with other people physically that’s important.”

And some ministers fear that not meeting regularly in person could lead to apathy among parishioners, causing them to drift away.

Not all congregations in Colorado Springs have been averse to the state’s new mask order. And the myriad approaches to reopening highlight the difficulty of placing a single label on churchgoers during the pandemic.

For the Rev. Jeremiah Williamson, masking up is the Christian thing to do.

“A lot of this stuff has been caught up in partisan politics, and I’m not interested in that,” Williamson said. “I’m interested in keeping our people safe. We’re one of those churches that believes science.”

At Grace and St. Stephen’s Episcopal Church, Williamson has forsaken his pulpit for the front lawn. There, on a recent Sunday, dozens of church members sat in folding chairs spaced 6 feet apart, inside white circles painted on the grass. No congregants sang. Everyone wore masks.

Nearby on North Tejon Street, more parishioners sat in parked cars, listening on their radios as the service was broadcast via a shortwave transmitter.

And, before attending, everyone was urged to provide their names and phone numbers, in case someone tests positive and public health contact tracers need to find those who may have been exposed.

“It just seems, as religious people, Christians, we would want to do our best for the common good, for the greater good,” Williamson said.

Across town, Payne Chapel AME Church also has opted not to gather indoors out of concern for its predominantly Black congregation; Blacks and Hispanics have been experiencing higher rates of hospitalization and death from the coronavirus. Church members recently met in their vehicles in the church’s parking lot, waving to one another through car windows and singing hymns together on a teleconference line.

For that 300-member African Methodist Episcopal church, to have met indoors also would have been “between ridiculous and stupid,” said Pastor Leslie White, who heads the congregation.

However, Calvary Worship Center, which has a racially diverse congregation, is meeting indoors and not enforcing the mask order, even though two staff members were confirmed to have COVID-19. Instead, the church, led by a team of Black and white pastors, only recommends they be worn.

For Joshua Stephens, 29, the key to staying healthy is his faith.

The pandemic hit just as he wrapped up earning a degree from Charis Bible College, headquartered in Woodland Park. The local religious school received a cease-and-desist letter in early July from the Colorado Attorney General’s Office for hosting a conference with 300 to 500 people in violation of the state’s lockdown orders that limited gatherings to 175 people. Nevertheless, the college’s pastor had vowed to ignore the order.

Stephens, who attends Church for All Nations, said his belief in God informs his approach to the pandemic, after saying he was miraculously cured of cancer four years ago.

“My personal conviction is, I don’t get sick,” said Stephens, who was not wearing a mask.

Kaiser Health News (KHN) is a national health policy news service. It is an editorially independent program of the Henry J. Kaiser Family Foundation which is not affiliated with Kaiser Permanente.

The Road @ Chapel Hills chose to close its doors for 13 days after one of its ministers tested positive for the coronavirus.