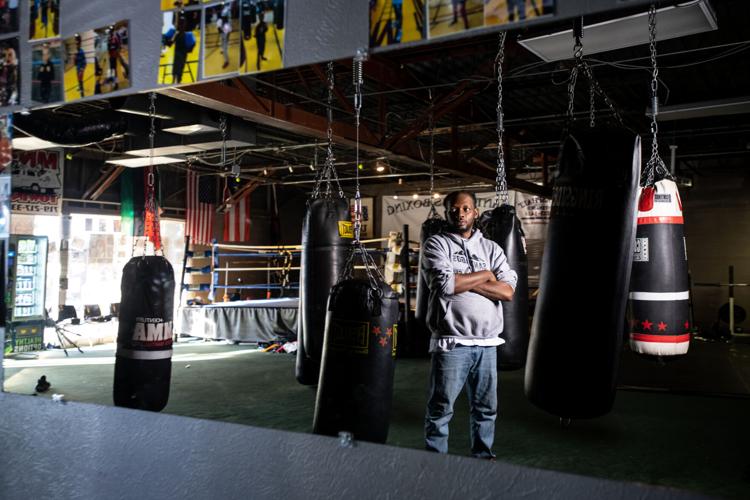 When the founder of Santiago’s Boxing Club, Jose Santiago, got sick, he passed the torch to Jerone Penrose, pictured, who is now the owner, a coach and a proud father of champions that train at the gym. 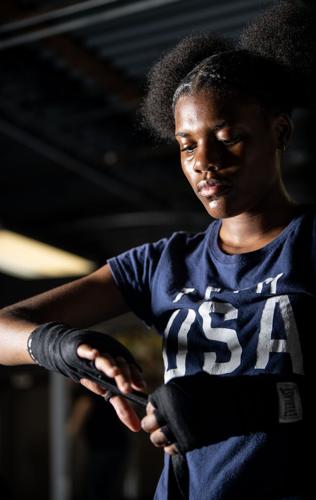 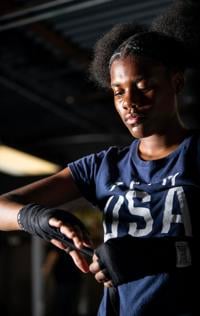 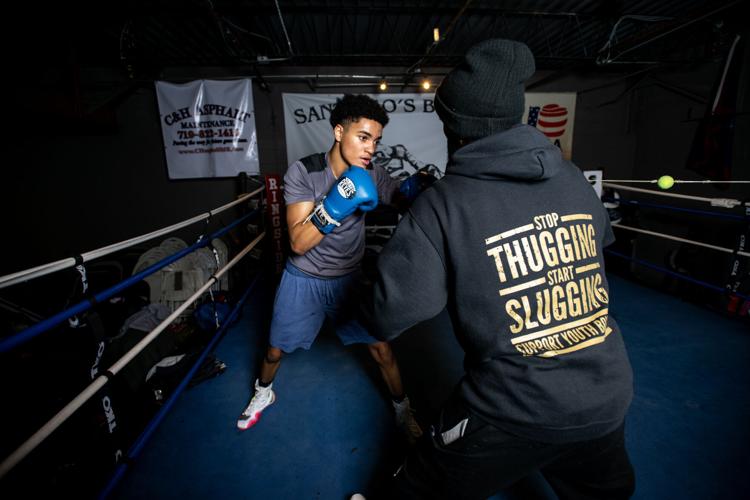 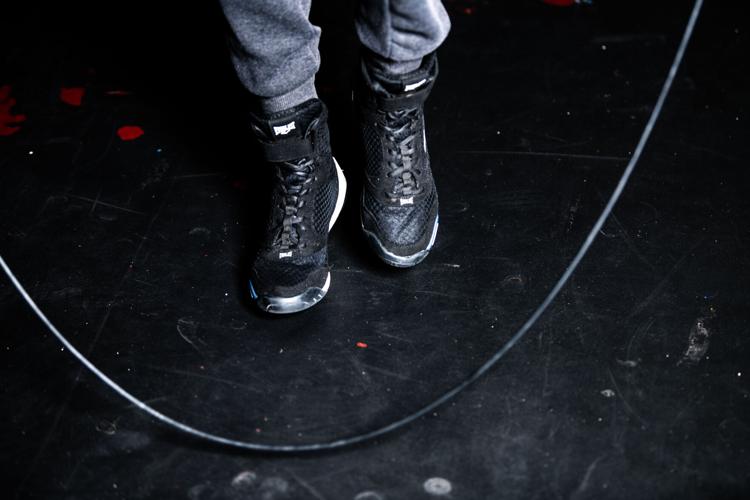 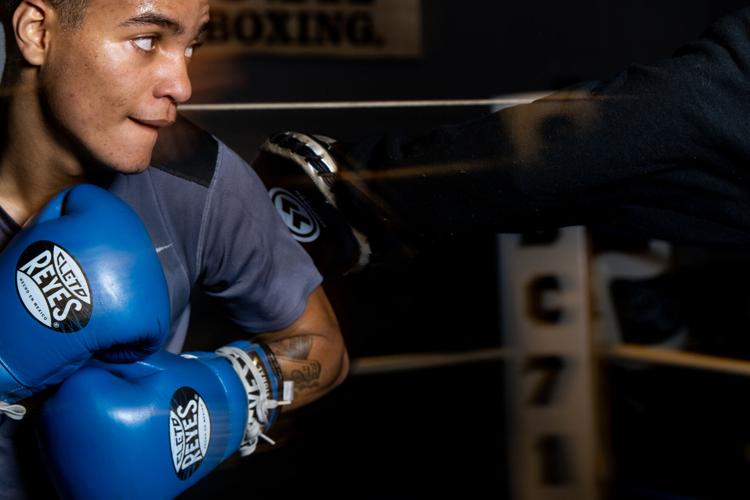 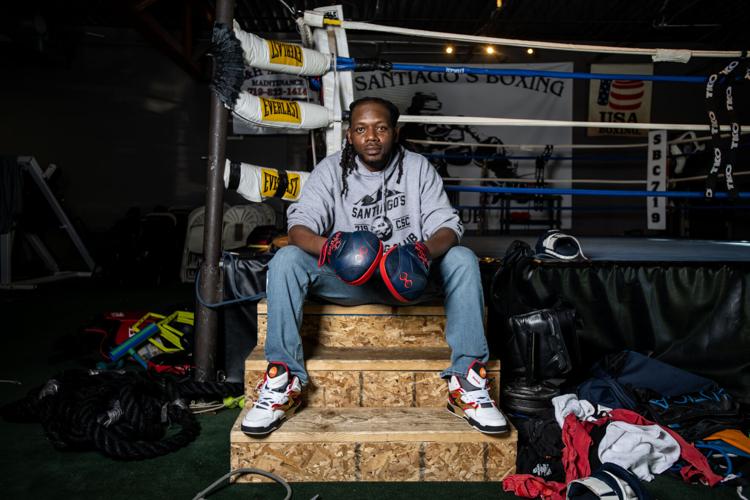 When the founder of Santiago’s Boxing Club, Jose Santiago, got sick, he passed the torch to Jerone Penrose, pictured, who is now the owner, a coach and a proud father of champions that train at the gym.

His older sister, Starr Penrose, is nearby, working combinations. In the boxing ring, Troy Nash holds a body bag to his chest and braces himself against the practice punches from a young boxer.

“Boxing showed him discipline, gave him purpose and got him in touch with who he was,” said Nash’s father, Troy Nash. “It made him more responsible and gave him maturity.”

The nonprofit Santiago’s Boxing Club is for the boxing curious, the boxing serious and everybody in between, and on this late afternoon in mid-December it’s a sweaty hive of energy in its strip-mall home at 2818 E. Pikes Peak Ave.

Jerone Penrose, father to Jerone III and Starr, stands quietly outside his corner office, an unassuming sentinel while members and coaches work throughout the dimly lit space. The boxing gym owner is a proud papa, not only of the boxing champs who call the space their home, but of the contribution the gym makes to the community and the way boxing can help improve lives.

“This is a method of giving back,” Jerone said. “Nobody gets paid for any of the work. Coaches here are volunteers. I spend a lot of time writing grants, putting proposals together and doing everything we can to make sure the doors stay open.”

For assistant coach Robert Meek, the boxing gym has become family. Meek, a retired amateur boxer who holds 10 Golden Glove titles and an impressive 289 wins and 32 losses record, has coached at the gym for 18 months.

“Boxing has taught me a lot in life,” Meek said. “It’s a good thing if you’ve got people guiding you, to help you in life, to get off the streets and out of trouble, to mentally prepare you.”

Kids as young as 5 can start boxing at Santiago’s. Everything is based off skill level, so a beginner adult might be in class with a beginner 10-year-old, though they would never go up against each other in a bout. The gym also offers competitive, weight loss, strength and conditioning and self-defense programs, as well as Box it Out, which teaches people how the tools they learn in the ring apply to daily life.

“If you listen to a boxer talk, they’re going to tell you between 80 and 90% of boxing is mental. The rest is physical,” Jerone said. “When a boxer steps in the ring, he has his coach, his trainer, parents, fans and supporters pushing him to do great. But that coach can’t throw a punch for you. Your trainer can’t throw a punch for you. It has to be that boxer. He has to take all the training and use it in the ring for himself.

“It’s the exact same thing in life. You have your parents, your teachers, counselors, all these people helping you succeed in life. But guess what? When you take the test they can’t do it for you.”

Jerone is no stranger to boxing. Growing up in Virginia, he constantly brawled with kids who picked fights with him, until a neighbor began training him in the sport of bare-knuckle boxing, a slightly more organized form of street fighting. A few years later he enlisted in the U.S. Army, followed that up with government contracting work, fathered 10 kids and found himself in Colorado Springs in 2013, lured by the mountain scenery, what he calls a muse for his writing. He’s written a book of poems and two books about heterosexual relationships — “Can I Be the Man?” and “Our Need of You” — and filmed two TV shows based on those books. The shows can be found on Sparkx TV on Roku, Discovered TV or online at facebook.com/KINGNAIB.

After landing in town, a serendipitous errand dropped him at the feet of José Santiago and his boxing gym, which opened in 2016. While taking Jerone III for a haircut, he let his 6-year-old practice punching at his hands. An 11-year-old Troy Nash happened to be there and invited them to stop by the gym.

“I came here on a Monday, met José and it was over from there,” Jerone said. “It’s just the spirit of all this. He had the same passion. I looked at him like a father.”

After Jerone’s son and two of his daughters started boxing at the club, Santiago offered to train Jerone and his wife to be coaches, and they were soon traveling to boxing tournaments around the country.

“Boxing has been part of my life for as long as I can remember, but he fine-tuned it for me,” Jerone said. “I learned the ways and the politics of boxing and everything that comes with it.”

But life took a hard turn. Santiago, a cancer survivor, was suddenly faced with a recurrence in 2018. He knew it was serious, so eight months before he died he and the coaches got together and voted for Jerone to take over the gym. And apparently, he’s good at it — Santiago’s is ranked No. 9 in coaching staff in the nation by USA Boxing, and the gym is ranked No. 24.

Some of that might be due to Jerone’s commitment to the community. The gym helps feed the homeless and clean up neighborhoods, holds a teen night at Hillside Community Center and recently did a turkey drive for Thanksgiving. Jerone also is a member of Men of Influence, a group of men who meet weekly with the purpose of opening the lines of communication between local gangs to prevent gun violence.

“When there’s a situation, before the gun violence takes place, we’re doing mediation,” Jerone said. “We get them together, sit them down, try to talk it out. If they can’t and there’s animosity, they get in the ring and we let them go until all the animosity is gone.”

Jerone knows the image people might have of boxing — the bloody knockouts, Mike Tyson chomping off ears, the general violence. But he wants people to look deeper. Boxing is more than that. It’s a way to rehabilitate wayward kids and help people develop confidence.

He likes to compare it to karate and other martial arts.

LAS VEGAS – The muted excitement level didn’t seem to jump up to meet the level of achievement, but it left a clear indication of Raquel Penni…