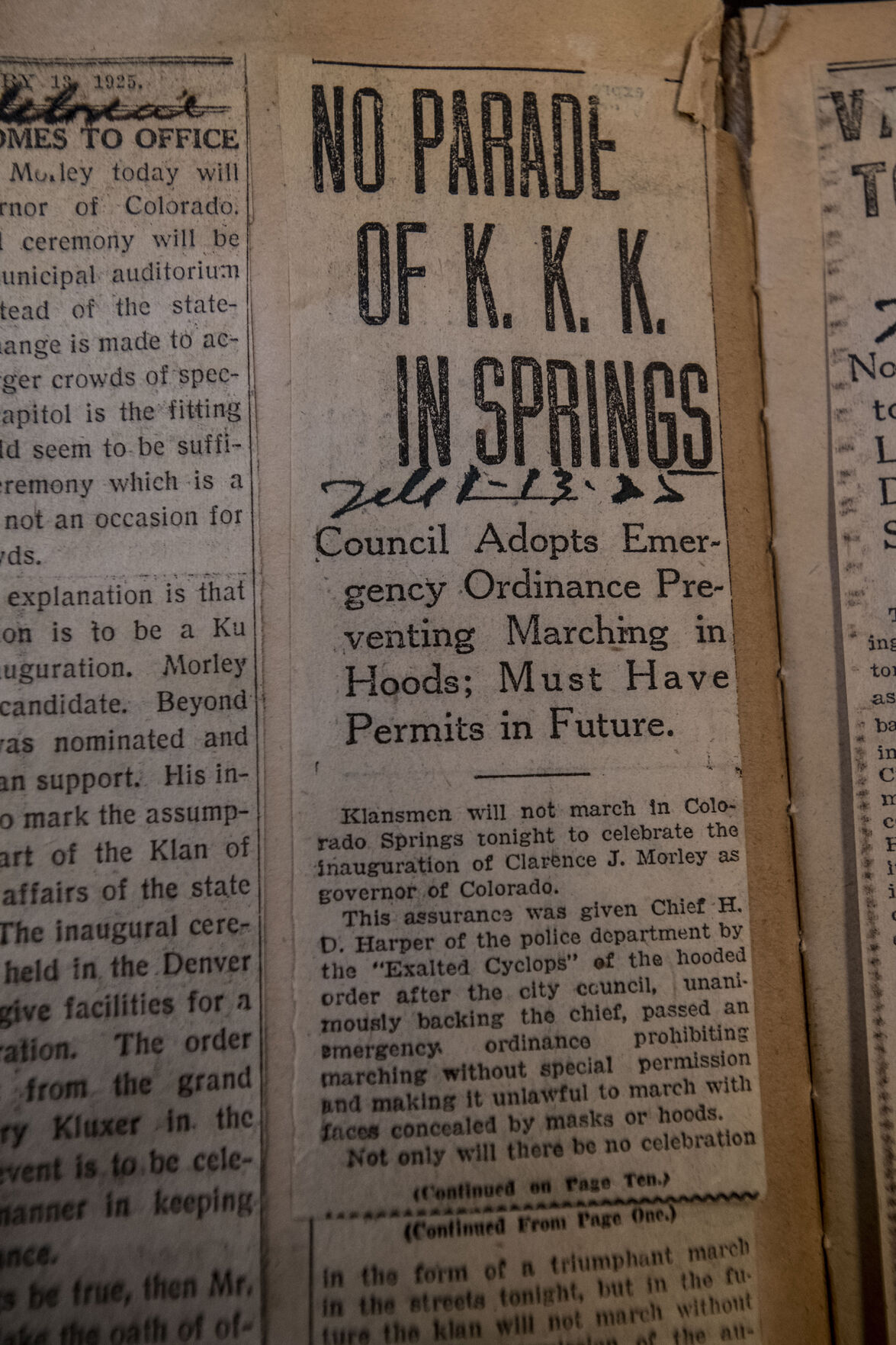 Archived newspaper articles from the Telegraph, dated 1925, from the Pioneers Museum in Colorado Springs. (Chancey Bush/ The Gazette)

Archived newspaper articles from the Telegraph, dated 1925, from the Pioneers Museum in Colorado Springs. (Chancey Bush/ The Gazette)

Colorado Springs stood out as an island of opposition to the Ku Klux Klan during the 1920s, a period when the organization rose to power in Colorado.

"They had a stronghold in Denver," Witherow said. "They truly did control the state."

The Klan infiltrated state politics in Denver, as well as other cities across Colorado, and set its sites on entering the Colorado Springs City Council and the city's school board but were unsuccessful, Witherow said.

The Klan tried to instigate unrest and social discord within communities by exacerbating religious and racial differences, she added.

"They did burn crosses on the west side; they burned a cross on top of Pikes Peak," Witherow said. "So this was a very real threat."

Despite the Klan's attempts at intimidation, citizens and significant community figures stood resolute against the Klan. The Gazette's publisher at the time, C.C. Hamlin, obtained Klan membership records and published one member's card on the front page of the paper as a shame tactic, Witherow said. The city's police chief, Hugh Harper, and department store owner, Ralph Giddings, also rallied against the Klan.

"They never gained the strength they had in other communities," Witherow said. "So it's actually a success story."

Some historians, such as John Harner, a professor of geography and environmental studies at the University of Colorado Colorado Springs, believed the strong opposition to the Klan in Colorado Springs was driven by economic and business motives.

"Business leaders saw the Klan as just harmful for business," Harner said. "They were worried about the effects upon the business environment in Colorado Springs, you know, attracting companies and workers and what not."

Community members also wanted to protect democracy in their city and state, and they saw the Klan in direct conflict with democratic values, Harner said.

"The clan up in Denver and all their power brokers were handing out government contracts and monies and positions to loyal supporters, and the El Paso County was getting passed over," Harner said.

Other historians, such as Robert Goldberg, a history professor at the University of Utah, thought the strong convictions of the city's Protestant elite contributed to opposition against the Klan.

The Colorado Springs community stance started to spread throughout the state thanks to the activists who stood up against the Klan, Harner said.

"We were really influential from that point of view," Harner said. "Colorado Springs spread the opposition."

Colorado Springs' story at 150th anniversary: One of desire and innovation