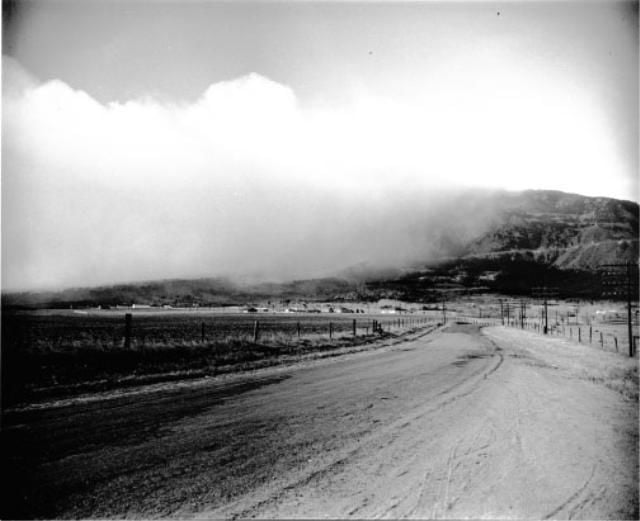 Fanned by severe high winds, a fire on Jan. 17, 1950, spread from land that is now The Broadmoor golf course down to Fort Carson. The worst wildfire in the Pikes Peak region’s history, the blaze claimed nine lives, injured more than 30 soldiers and destroyed 92 buildings on Fort Carson. 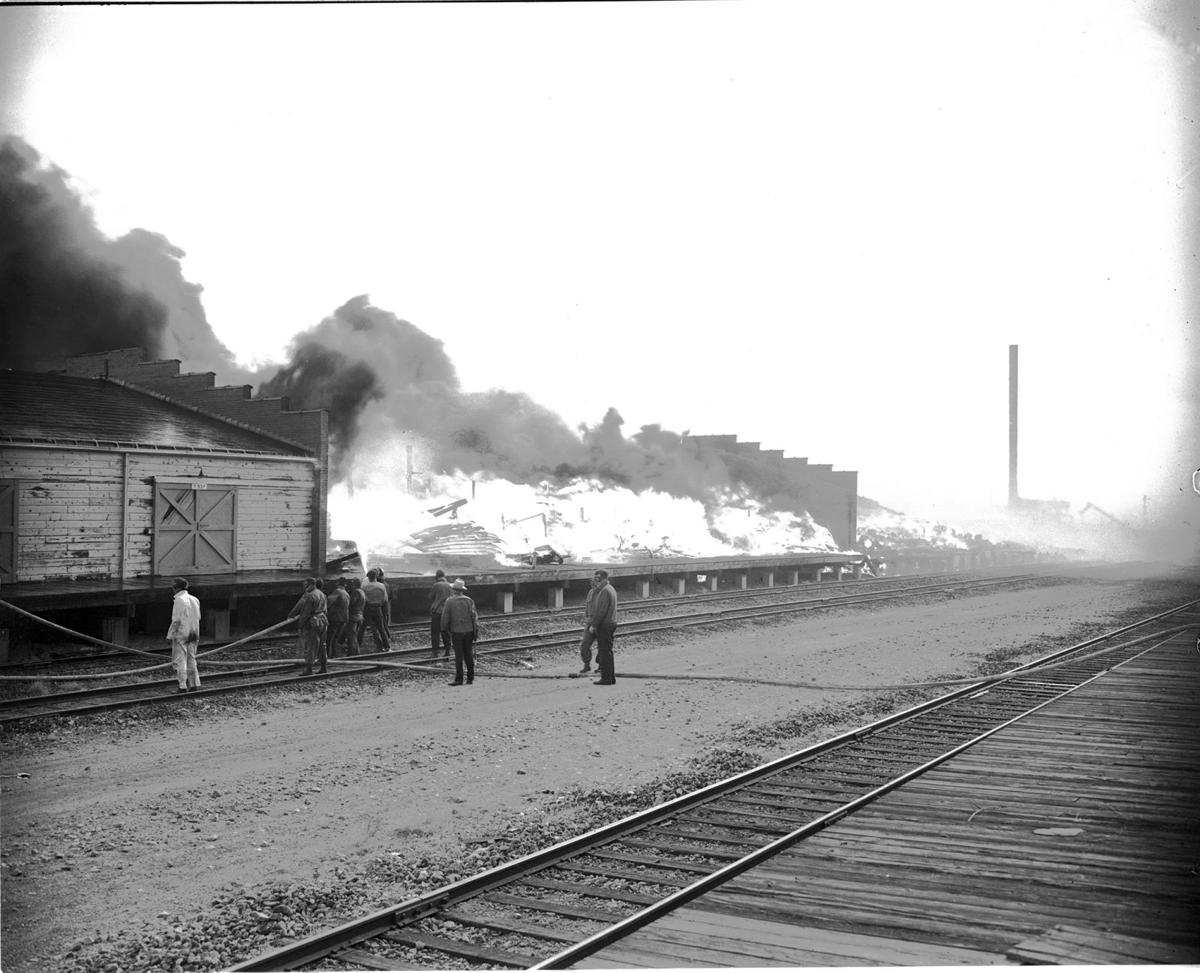 Men stand alongside railroad tracks in January 1950 and watch a fire destroy buildings behind. A lone smokestack rises at far right, and men hold fire hoses. The photo is identified as a fire near Camp Carson (now Fort Carson). 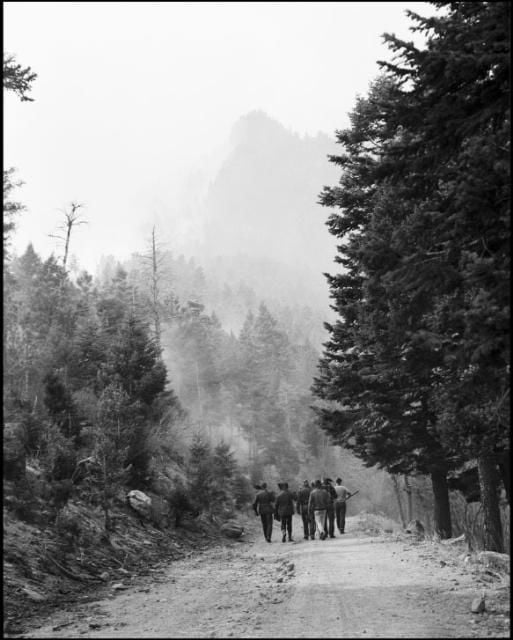 Firefighters in Cheyenne Canon during the Jan. 17, 1950, fire that engulfed Cheyenne Mountain and Camp Carson. Firefighters saved The Broadmoor hotel after fire came within yards of the hotel before moving toward Camp Carson.

Fanned by severe high winds, a fire on Jan. 17, 1950, spread from land that is now The Broadmoor golf course down to Fort Carson. The worst wildfire in the Pikes Peak region’s history, the blaze claimed nine lives, injured more than 30 soldiers and destroyed 92 buildings on Fort Carson.

Firefighters in Cheyenne Canon during the Jan. 17, 1950, fire that engulfed Cheyenne Mountain and Camp Carson. Firefighters saved The Broadmoor hotel after fire came within yards of the hotel before moving toward Camp Carson.

Editor's note: This July, as Colorado Springs gears up for its 150th birthday on the 31st, The Gazette has prepared a series of articles on the history of our city. Check back for fascinating glimpses into the people and events that have shaped Colorado Springs into the landmark it is today.

Wildfires have reshaped the Colorado Springs landscape in recent years, torching hundreds of houses and claiming lives in the heat of summer. But the town's deadliest wildfire didn't follow the same patterns as the Waldo Canyon and Black Forest fires, or many others in the West that start in the summer and rage for weeks.

High winds brought the fire to life from smoldering vegetation in the middle of a January night, when snow and cold typically stave off big fires. But in this case, dry conditions and extreme winds fed the fire that burned an estimated 50 square miles, destroyed 92 buildings at Fort Carson, killed nine people and injured many who fought the fire, according to historical news and military reports.

"Hardly a man who had been through the ordeal was unscathed," according to a military report about the fire that started on Jan. 17, 1950.

The fire started when the wind turned smoldering brush and stumps on the future Broadmoor Hotel golf courses into a raging blaze. Crews responded in the early hours of the morning, but couldn't control the fire that was driven by shifting winds up Cheyenne Mountain, south to Fort Carson, then known as Camp Carson, and southeast to an area north of Fountain in a day, said Walter Lawson, a Broadmoor area resident who has studied the fire. Hotspots from the fire on Cheyenne Mountain kept burning through Jan. 31, according to a military report.

The extreme winds made the fire tough and dangerous to fight and many of the men were not clothed or trained properly for such conditions, Lawson said.

The wind turned the air so dark with smoke and flying debris that it limited visibility to a few feet, newspapers reported at the time.

"The gusts of wind pick up stones, grass, small bits of wood — everything that is loose — and hurls them through the air with force enough to knock a man out," one story said.

Charles "Bud" Burrill was among those who fought the fire and was badly burned trying to take a fireman to the hospital, The Gazette reported in 2012. Burrill accidentally drove into a ditch because a wooden bridge had been consumed by fire and was severely injured.

"My face went right into the fire — I remember seeing these red ashes. It about burnt my face off. My right hand was real deep in the ashes. I pulled my hand out and all the skin fell off," Burrill told The Gazette.

Burrill, a private at the time of the fire, was one of about 7,000 soldiers and volunteers sent out to fight it. Many were woefully unprepared, some equipped with just wet burlap bags and shovels, Lawson said.

"They sent soldiers out with burlap bags, wet burlap bags to trap the sparks and of course the burlap bags froze because it’s January and were useless," he said.

Sending soldiers and volunteers out to attack a fire running through dry grasses head-on is a risk that would never be taken today, said Glen Silloway, retired Fort Carson Fire chief who collected documents on the fire.

That approach led to the deaths of nine people fighting the fire, Silloway said. Among them was Harley McCullough, 14, who volunteered to fight the fire and died after 45 days in the hospital. None of the families living on the post, about 600 women and children, were harmed, all were evacuated safely to Pueblo, according to the Associated Press.

Fort Carson, then known as Camp Carson, named streets on the post for those killed in the 1950s fire. These are the people who died in the fire:

Poor building materials likely contributed to the large number of structures and property that was lost — damage that totaled about $3 million at the time. In some cases, the buildings were roofed with tar paper, some were sided with fiberboard, and had no insulation, Silloway said. About 40 of the buildings were in a deserted prisoner of war area, the Camp Carson Mountaineer reported.

"The buildings on Fort Carson were pretty much tinder boxes," Silloway said.

Following the fire, the post put in a road 150 feet wide and a new 18-inch ditch around the post to act as a fire break and all new structures were built with fire resistant materials, the Mountaineer reported

While the Broadmoor area could burn again and a fire in that area could be even more devastating because of all the homes, it would behave differently because there are so many roads in the area that could help slow it down, Silloway said. When the 1950 fire erupted, open ranch land allowed the fire to run unimpeded, he said.

The firefighting techniques and equipment have also improved, Silloway said. Instead of fighting the fire head on, firefighters would likely concentrate on stopping a fire at a strategic place, such as a wide road, he said.

"Everything from building construction to firefighting tactics to prevention have improved immensely since the 50s," he said.

Residents can help prevent a similar tragedy by should cutting back brush and grass around their own homes, to improve safety, he said.

For Lawson, the speed of the fire across what is now a heavily populated area should serve as a warning for residents and the city.

"Today what would that be in losses of property? And the bigger, scarier question, lives?" he said.