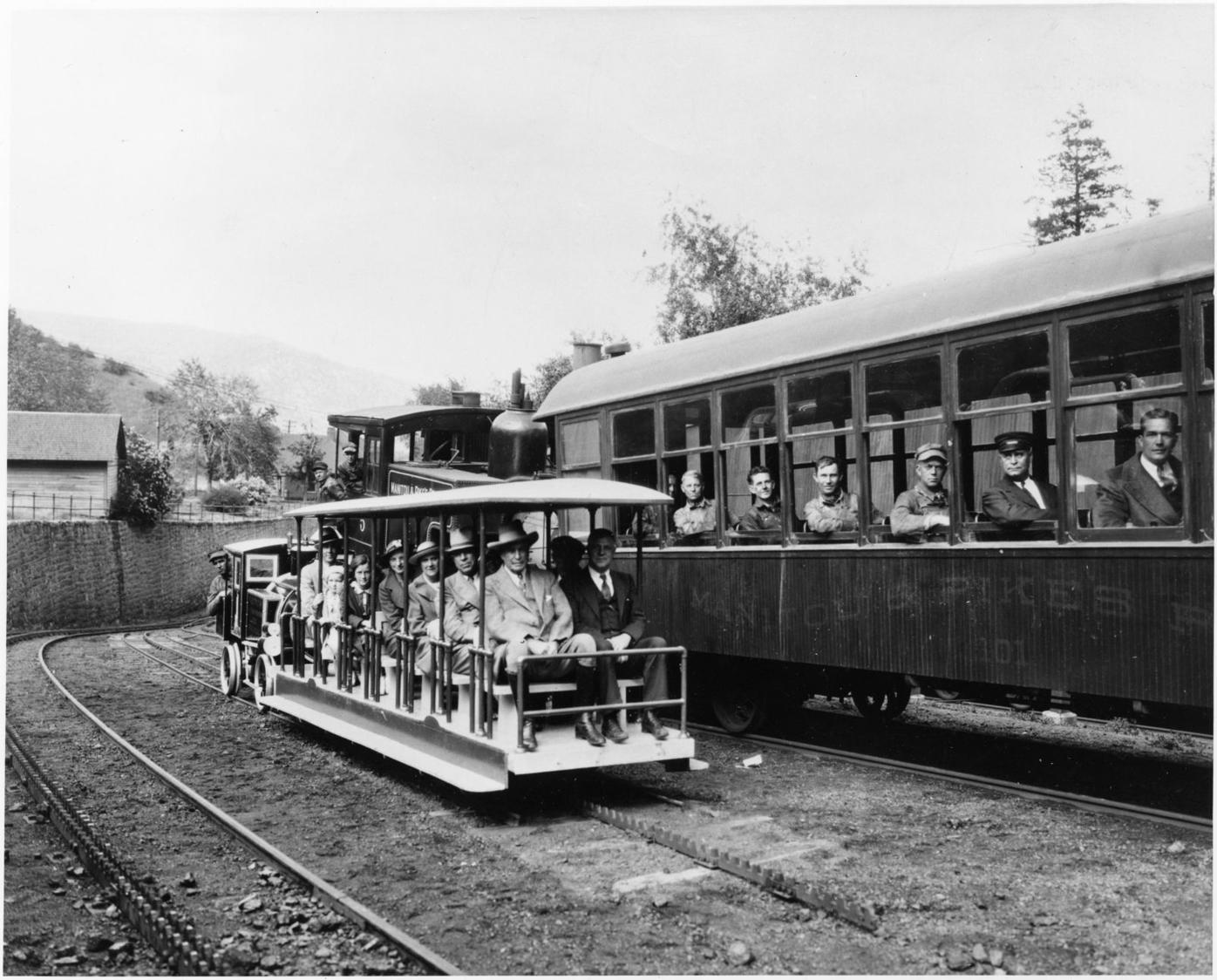 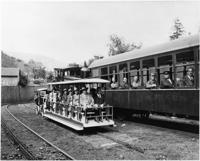 Spencer Penrose sits in the front left of his miniature railroad to the Cheyenne Mountain Zoo in 1938 in southwest Colorado Springs. The train sits alongside an engine and car of the Manitou & Pikes Peak Cog Railway, with crew members inside. Penrose, who was from a prominent Philadelphia family, graduated last in his class at Harvard in 1886. He later came to Colorado Springs and made a fortune in mining in Cripple Creek. Penrose built The Broadmoor hotel in southwest Colorado Springs and created the El Pomar Foundation in 1937 at the urging of his wife, Julie. 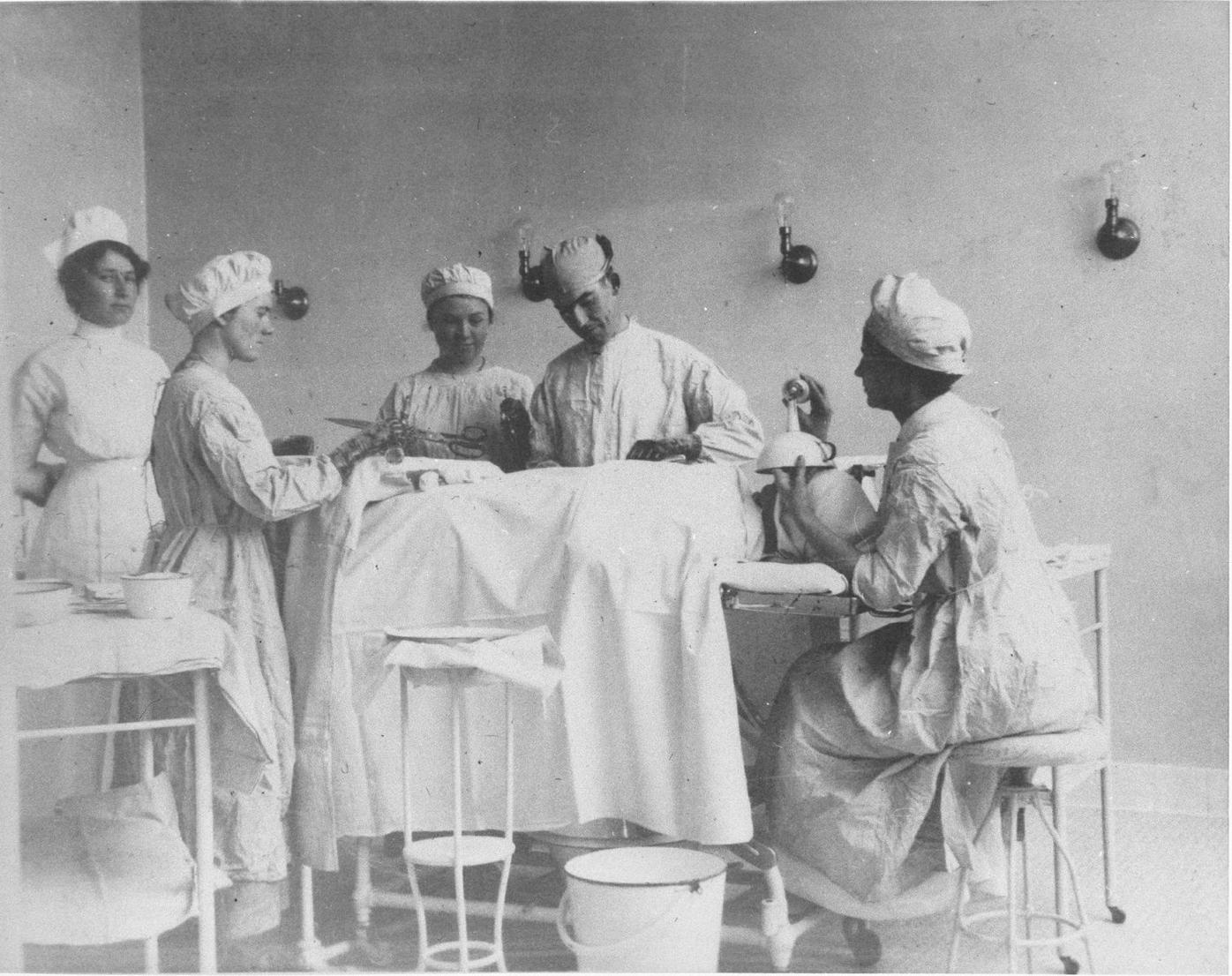 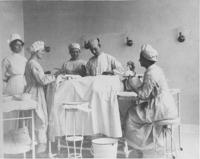 Operating room, a doctor and four nurses, wearing caps and gowns but no masks or gloves, operate on a draped patient at Beth-El Hospital in Colorado Springs, circa 1915. One nurse administers anesthesia using a cone. Another handles large scissors. Lightbulbs line the wall. Julia Work, third from left, is identified on the back of the photograph. 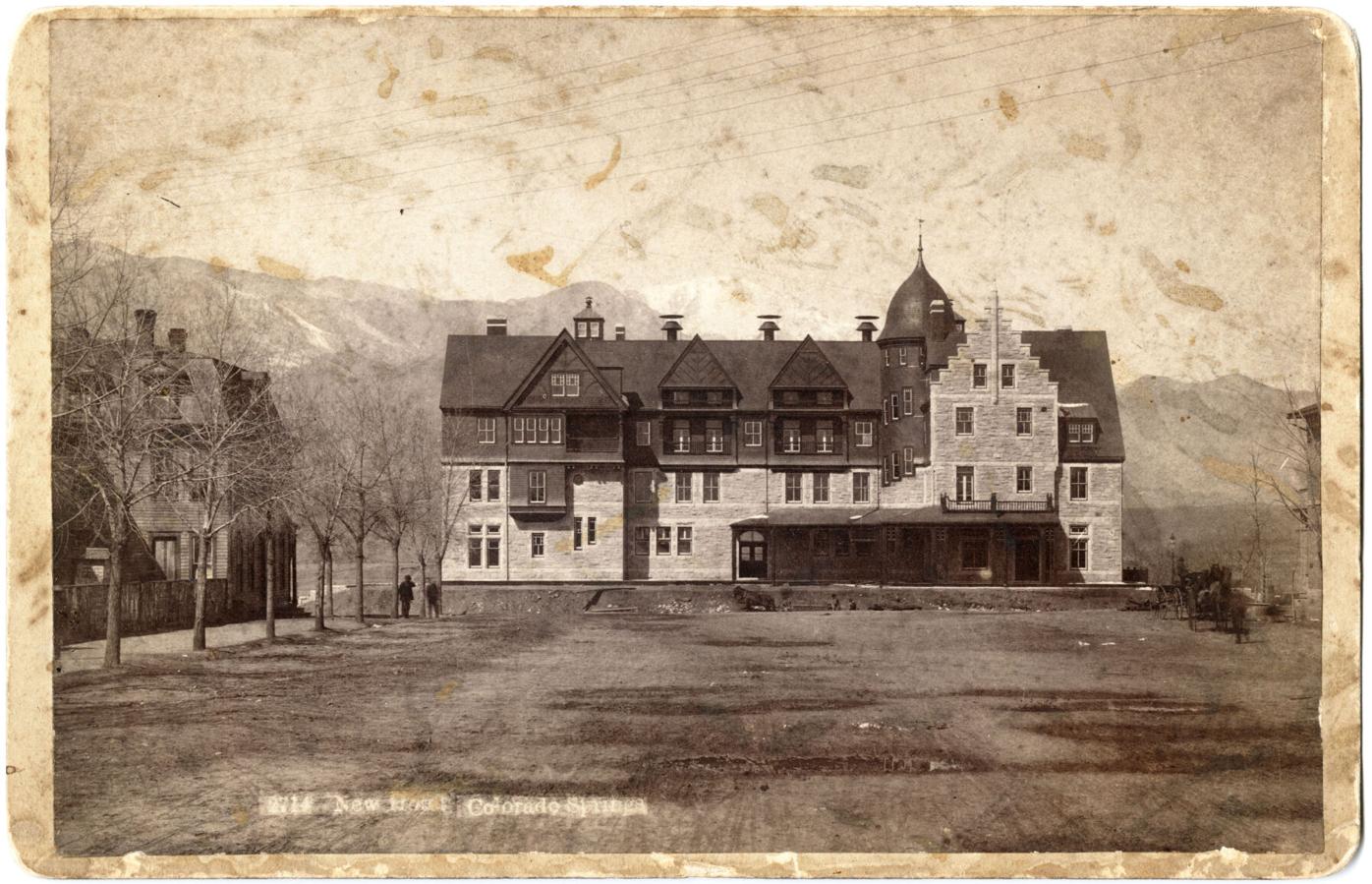 A view down Pikes Peak Avenue toward the first Antlers Hotel, circa 1883. Snow covers Pikes Peak in the background. Printed on the front is “2714. New Hotel Colorado Springs.” Printed on back [in part] “Artistic Views of Colorado” and “Photographed by H. W. Stormer, Catalogues sent Free on Application.” 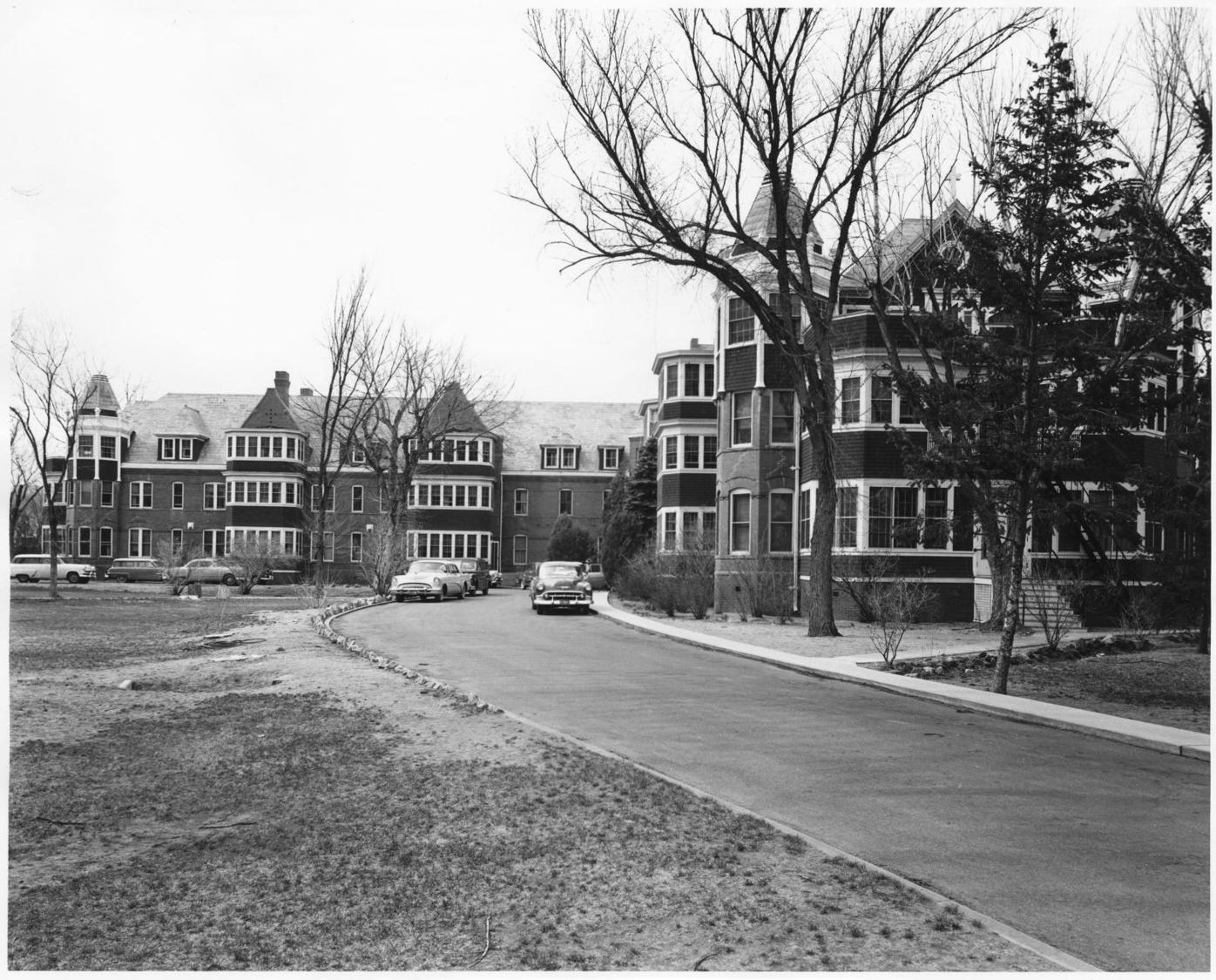 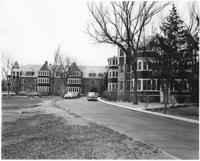 Glockner Penrose Hospital is pictured on April 6, 1956. Originally the Glockner Tuberculosis Sanatorium (founded in 1891), the facility eventually became Glockner Penrose, an acute care hospital, through the work of the sisters of Charity of Cincinnati and the philanthropy of Julie and Spencer Penrose. The building in the photo, in Colorado Springs’ Old North End, was replaced by a larger hospital building later in the 1950s and today is named Penrose Hospital and includes intensive care, emergency trauma and surgical facilities. 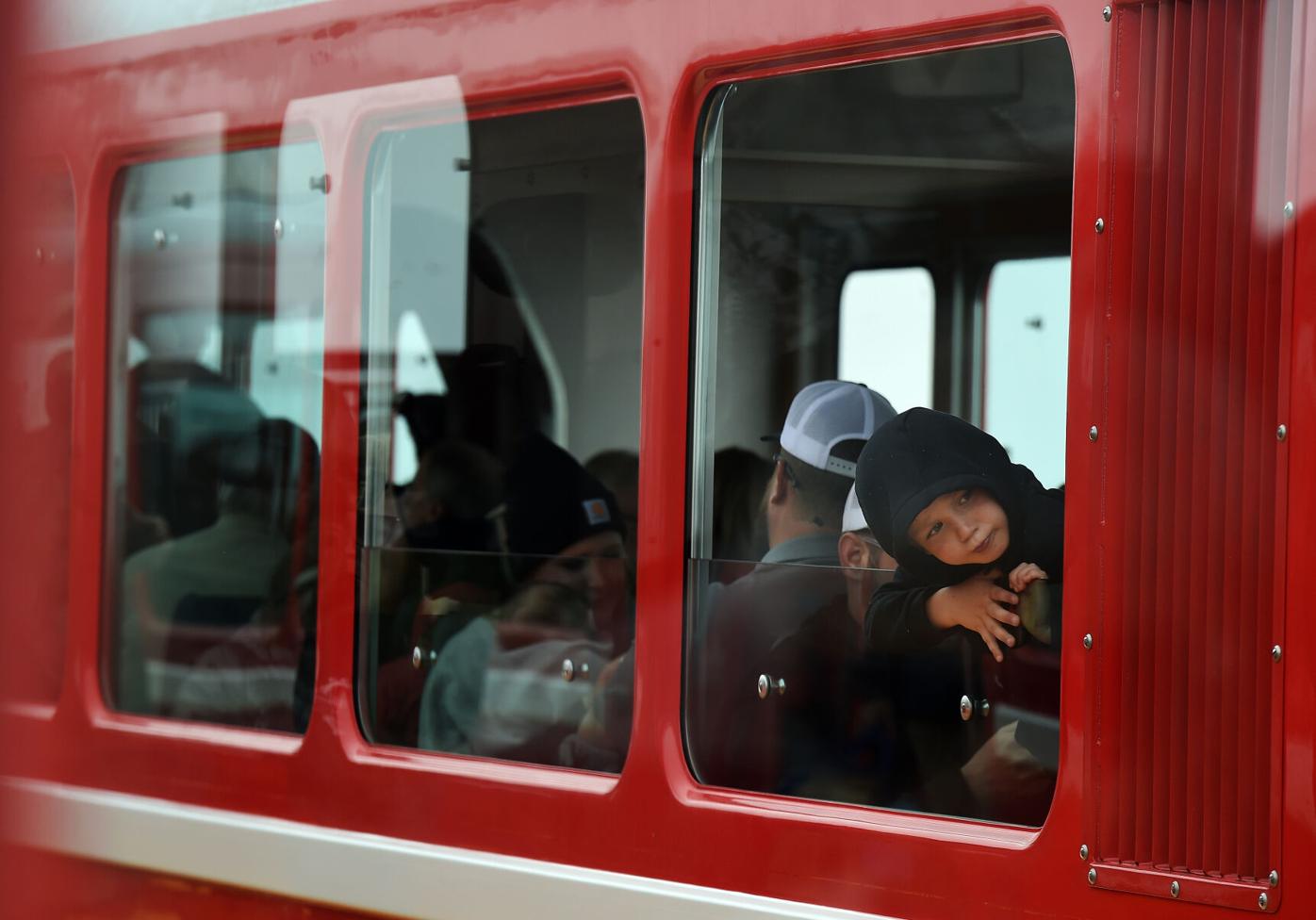 Blaise Minor looks out the window of the remodeled Broadmoor Manitou and Pikes Peak Cog Railway before heading down from the summit of Pikes Peak on Wednesday, June 30, 2021. 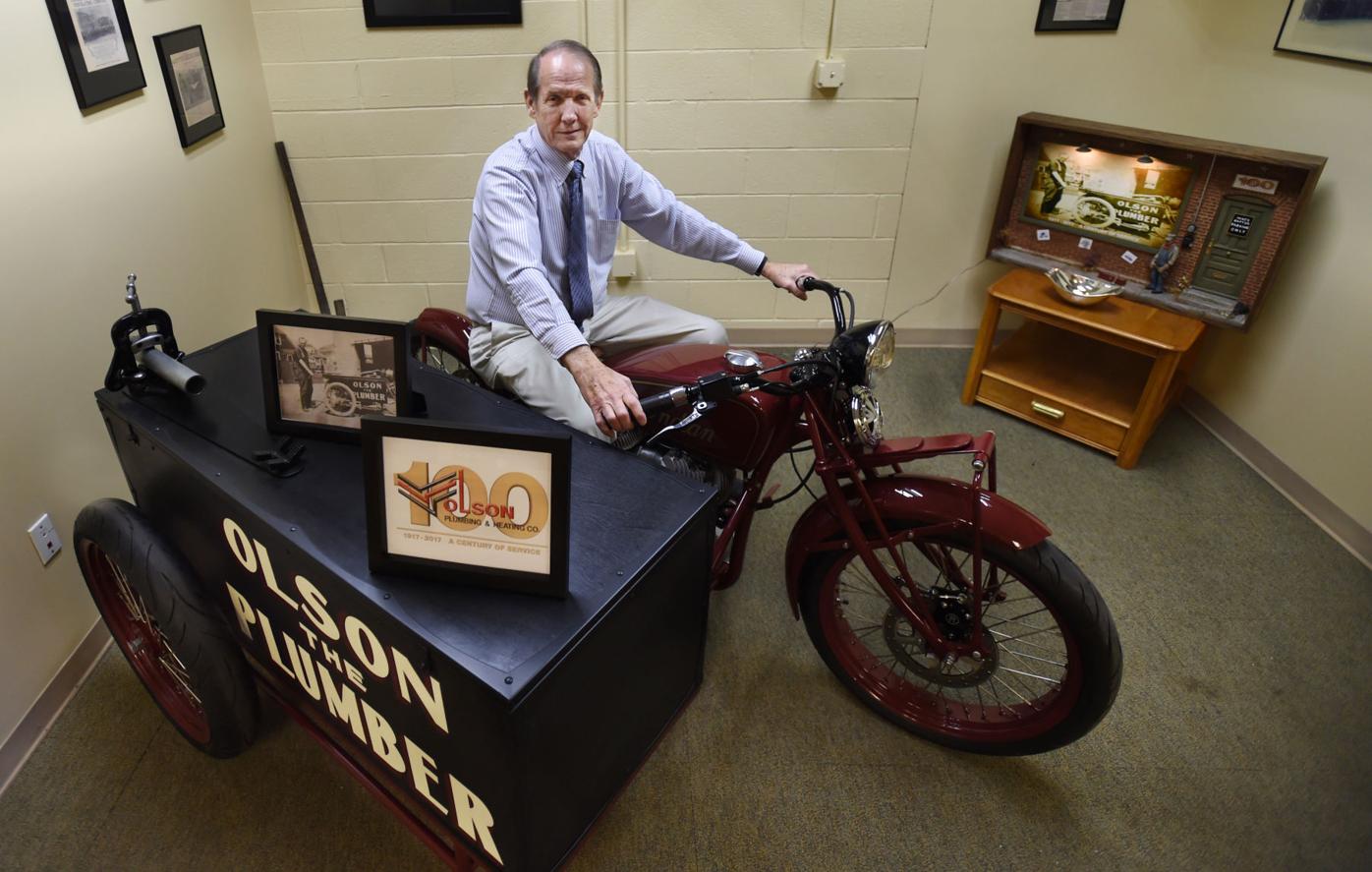 Olson Plumbing & Heating has been in business for more than a century. The current owner, Mike Trapp, has had five generations of his family work for the company. He sits on a replica motorcycle and trailer of the transport system used by the founder, Arthur Olson, in this 2017 photo. 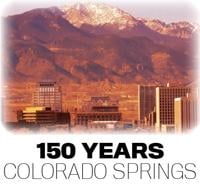 Spencer Penrose sits in the front left of his miniature railroad to the Cheyenne Mountain Zoo in 1938 in southwest Colorado Springs. The train sits alongside an engine and car of the Manitou & Pikes Peak Cog Railway, with crew members inside. Penrose, who was from a prominent Philadelphia family, graduated last in his class at Harvard in 1886. He later came to Colorado Springs and made a fortune in mining in Cripple Creek. Penrose built The Broadmoor hotel in southwest Colorado Springs and created the El Pomar Foundation in 1937 at the urging of his wife, Julie.

Operating room, a doctor and four nurses, wearing caps and gowns but no masks or gloves, operate on a draped patient at Beth-El Hospital in Colorado Springs, circa 1915. One nurse administers anesthesia using a cone. Another handles large scissors. Lightbulbs line the wall. Julia Work, third from left, is identified on the back of the photograph.

It didn't take long for businesses to sprout up in Colorado Springs after its founding 150 years ago.

This was in an overview in the first Colorado Springs City Directory, published in 1879: "A large mercantile business is done in Colorado Springs. During the year ended July 31, 1879, lumber, groceries, flour, feed, grain, dry goods, boots and shoes, hardware, drugs, etc., were sold in the amount of $2,000,000. In addition to this about $275,000 worth of wool was marketed here. El Paso County, of which Colorado Springs is the capital, now stands at the head of the wool producing counties of the state."

The directory also noted a large trade in horses and beef cattle, the presence of three banks and several mining and prospecting companies. And it featured ads from such companies as Macomber & Potter, wholesale and retail dealers in furniture; Anderson & Jost, blacksmithing, horseshoeing and wagon shop; and C.W. Church & Co, "prescription druggists" that sold "perfumery, combs, brushes, toilet items, trusses and shoulder braces" — and pure Kentucky whiskies for medicinal purposes.

Those names and countless others are long forgotten; the business landscape is constantly evolving as businesses fail, owners retire, fashions change and technology moves forward. But amid all those businesses that have come and gone, there are some that have persisted and even thrived for a century or more in the Pikes Peak region. Here is a look at some of the area's long-lived enterprises:

Following on the heels of the city's sesquicentennial, The Gazette celebrates its 150th anniversary next year. The newspaper's history dates back to Colorado Springs founder Brig. Gen. William Jackson Palmer's creation of Out West in 1872. Out West became The Weekly Gazette a year later, then The Daily Gazette in 1878. After a series of owners, the morning paper was sold in 1906 to Clarence Dodge, who also bought the evening Colorado Springs Telegraph. Decades of ownership by the Hoiles family began when family members purchased the two newspapers in 1946. A combined evening/Sunday Gazette Telegraph began publishing a year later. The morning edition was discontinued but returned in 1977; a decade later, the afternoon edition ended. In 1997, the newspaper dropped Telegraph from its name, becoming The Gazette. The Anschutz Corp.'s Clarity Media Group has owned The Gazette since late 2012.

The Antlers hotel, built by Palmer, opened in June 1883; it got its name from Palmer's extensive collection of deer and elk trophies.

"The original hotel had modern conveniences such as a hydraulic elevator, central steam heat and gas lights," a history on the hotel's website states. "In addition, the property had a billiards room, music room, barber shop, Turkish bath and children’s playroom. The hotel had 75 large guestrooms, some with balconies, and no two rooms were alike."

The first hotel was short-lived, though. It was destroyed by fire in 1898, rebuilt and reopened in 1901. It remained in operation until 1964, when it was torn down and rebuilt again, reopening on March 20, 1967. These days, it's The Antlers, A Wyndham Hotel.

The Broadmoor was the vision of Philadelphia-born Spencer Penrose, who made his fortune in mining and dreamed of a grand hotel nestled in the Rockies that matched the elegance and sophistication of the finest European resorts.

The hotel was built in 13 months at a cost of $2 million, and The Broadmoor formally opened on June 29, 1918. "World travelers and connoisseurs of high art who have seen the new hotel pronounce it the last word in hotel building," that day's Colorado Springs Gazette proclaimed.

The internationally known resort is now in the hands of the Denver-based Anschutz Corp.

Patsy Mahaney, an Irishman who immigrated to the United States in the late 1800s, was known for his candied popcorn. (One account says he worked for the originator of Cracker Jacks; another says he sold his own recipe to the company.) First settling in Indiana, he then came west. He opened the original Patsy's store in Manitou Springs in 1903, according to the company's website. In the early 1920s, he sold the shop to a local family, the Osborns. They grew the business, adding peanut brittle and saltwater taffy to the lineup, before selling it to Howard and Carolyn Niswonger in 1956; at the time, the business had the Manitou shop and one in downtown Colorado Springs.

The downtown store is now gone and the Manitou store is leased as a franchise; the treats are produced in a factory on South 21st Street that includes a storefront. The Niswonger family reclaimed the business, now called Patsy's Original, in 2017 after selling it to a Denver businesswoman the year before.

The seed for the popular tourist attraction was planted when Zalmon Simmons, founder of the Simmons Beautyrest Mattress Co., dreamed of a more comfortable way to the summit after an arduous mule ride up Pikes Peak in the late 1800s. He founded the Manitou and Pikes Peak Railway Co. in 1889. On June 30, 1891, a passenger train carrying a church choir from Denver was the first to make it to the summit. Broadmoor founder Spencer Penrose bought the railroad in 1925.

Its future was in doubt after The Broadmoor suspended the railway operations in late 2017 amid concerns over aging infrastructure and equipment. But it reopened this year after undergoing a mammoth, $100 million restoration; a tax-incentive deal with the city of Manitou Springs helped finance the reconstruction.

Touted as the oldest realty company in the state, the business began as the Bennett Co., established by Charles P. Bennett in 1890. The name change came after Harry Shellenberger joined Bennett in 1911. Today, Bennett-Shellenberger is owned by Thomas Gorab, who bought it from his father, Edmund Gorab. The business, now in the Memorial Park Office Building across from Memorial Park, has had different homes over the years, but never far from downtown; the original Bennett Co. was at Pikes Peak and Cascade avenues.

Colorado Springs at 150 years | The local legend of Lon Chaney

Now one of the largest residential and commercial plumbing, heating and mechanical contracting companies along the Front Range, Olson Plumbing & Heating began in 1917 as a one-man operation. That man was A.E. Olson — aka "Olson the Plumber" — who traveled from job to job on his three-wheeled motorcycle. Among early high-profile projects, Olson worked with Penrose at The Broadmoor hotel and was recommended by him to work on the City Auditorium in 1922. The company is owned by the Trapp family; Mike Trapp, who started at Olson Plumbing & Heating as a "shop boy," is president of the company.

Memorial's roots reach back to the Colorado Conference Deaconess Hospital and Training School for Nurses, established in 1904. It became Beth-El (a Hebrew word meaning “House of God”) Hospital in 1911 with the opening of a facility on East Boulder Street. In 1943, the Colorado Springs City Council voted to buy Beth-El for $76,500 and renamed it Memorial Hospital to honor those who died in World War II. In 2012, voters approved a 40-year deal to lease Memorial Hospital System to UCHealth. In addition to the hospital on Boulder Street, a north location opened in 2007.