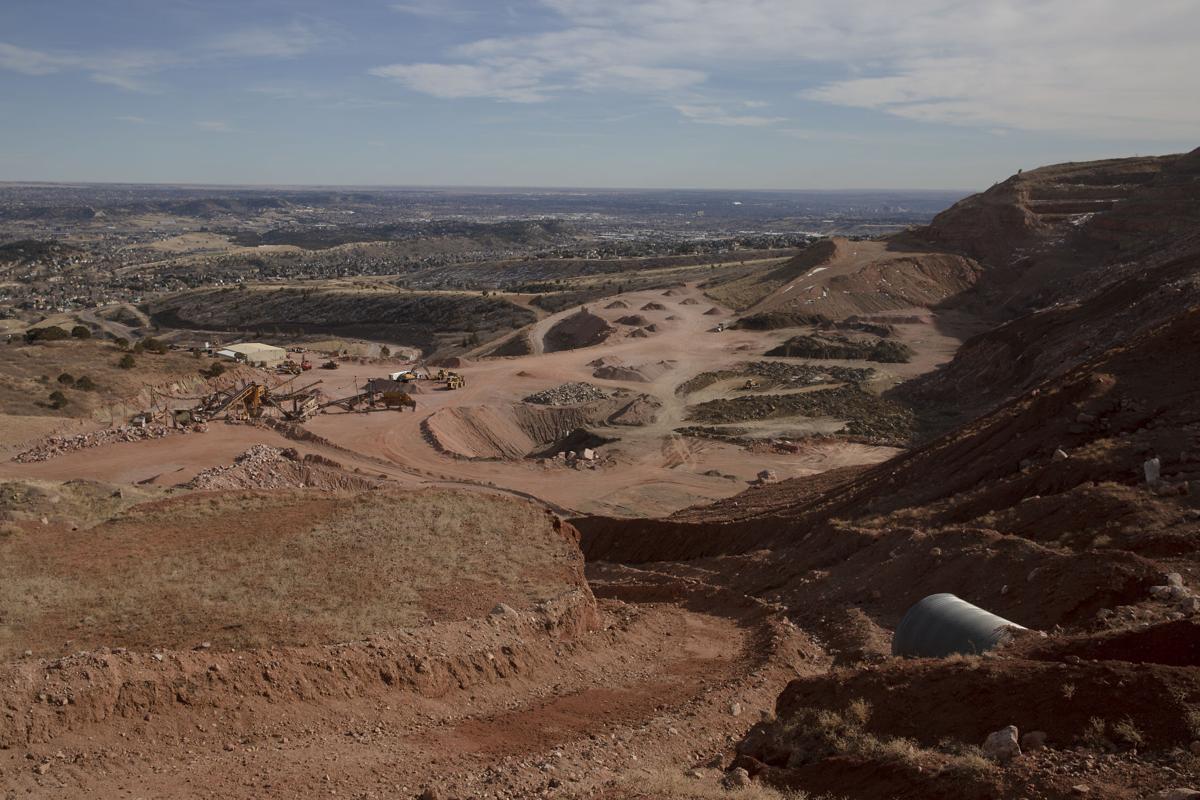 The view from the top of Pikeview Quarry in 2020. The city of Colorado Springs has agreed to allow the company responsible for quarry mitigation to take 2.2 million cubic yards of material from previously undisturbed land to the north of the quarry. (Katie Klann/The Gazette) 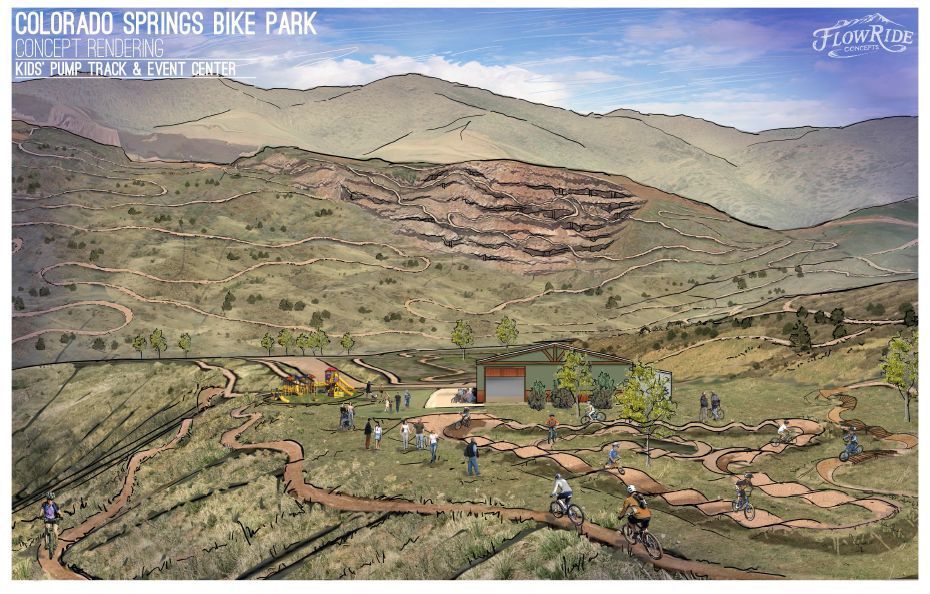 This is a rendering of the bike park the city of Colorado Springs would like to build at Pikeview Quarry. The city says excavation on the open space it purchased below the property could help prepare the area for a bike park.

The company responsible for reclaiming Pikeview Quarry will be allowed to take 150,000 dump trucks of dirt from open space recently purchased by Colorado Springs for $6.8 million — a deal an opponent sees as a giveaway.

The work is planned even though the company stated in documents submitted to the state it could do the reclamation without removing soil from the city's property.

The Colorado Springs City Council agreed in June to buy the 151 acres of open space from quarry operator Castle Concrete, expecting that the company, owned by Chicago-based Continental Materials, would use dirt from city property to help reclaim the quarry scar visible from Interstate 25. The city's purchase of the property helped close the quarry early, Castle Concrete President Jerry Schnabel said.

At the time of the vote, the city had not finished negotiating a set amount of dirt that could be removed.

City staff agreed in September to allow Castle Concrete to excavate 2.2 million cubic yards of dirt, or about 157,142 dump trucks full of material, from 9.3 acres north of the quarry— work that will lower the elevation of a ridge and require reseeding in the area, said Britt Haley, the city’s park design and development manager. The city also expects Castle Concrete to excavate an as-yet-unknown amount of dirt from a previously disturbed 23.87 acres because it is inside the boundaries of their state reclamation permit, she said.

Not everyone is happy with the deal.

“This is as if Continental Materials never sold this (open space) property and it irreparably destroys what the city bought and paid full retail for,” El Paso County resident Warren Dean said. Dean, a longtime critic of Continental Materials, has filed formal opposition with the state to the company’s Pikeview Quarry reclamation plan.

Haley contends Castle Concrete’s excavation of the open space could help set the stage for a future bike park that could be built on and adjacent to the quarry. Once reclamation is complete and approved by the state, Castle Concrete plans to donate the 100-acre quarry to the city for a bike park. The city's purchase also helped to limit excavation on the property that Castle Concrete would have had the right to do as the owner, she said. The current plan leaves about 118 acres facing a developed city neighborhood that will not be excavated.

However, plans Castle Concrete submitted to the Colorado Division of Reclamation, Mining and Safety state that quarry reclamation could be done without “a single cubic yard” of dirt from the property the city purchased. The same document goes on to say the company plans to use city dirt.

Schnabel said that while the company doesn't need dirt from the 9.3 acres north of quarry, the work will benefit the city by creating space for a parking lot that could serve future activities in the area. City inspectors are expected to sign off on the work, he said.

Haley said in a written response she was aware Castle Concrete had made statements about not needing dirt from city property, but she did not elaborate.

Castle Concrete has five years to complete reclamation after a decision is made on Dean’s opposition to the company’s reclamation plan. The Mined Land Reclamation Board could make a decision on Dean's opposition petition this month or next, said Chris Arend, a spokesman for the Colorado Division of Reclamation, Mining and Safety.

The reclamation plan calls for a total of about 3.2 million cubic yards of dirt to reclaim the Pikeview scar, said Michael Cunningham, a senior environmental protection specialist for the Division of Reclamation, Mining and Safety. The area will also be replanted with grasses, shrubs and trees, he said. The state will not sign off on reclamation until the vegetation can regenerate itself, he said.

Reclamation is designed to make the hillside look as natural as possible, blend in with its surroundings and eliminate the benches on the south end of the property, Schnabel said. The company also expects to leave the rock outcropping at the top that will look similar to Blodgett Peak, he said.

The city only has concept plans for the bike park and does not expect to start planning the park in detail until reclamation of the quarry is complete and deemed safe, she said.

The excavation of 2.2 million cubic yards of material from land to the north of the quarry is expected to change the topography of a double ridgeline. The ridge closest to the quarry will be reduced in height and the finished slope will be a 33% grade, Haley said. The city doesn't expect the work will leave a hole or depression, she said.

The area will be largely screened by another ridge. But neighbors in Mountain Shadows north of Rossmere Street will be able to see it, she said.

The additional 23 acres Castle Concrete can excavate cover an area near the bottom of the quarry, a city map shows. The excavation of this property will not be screened by topography, Haley said. 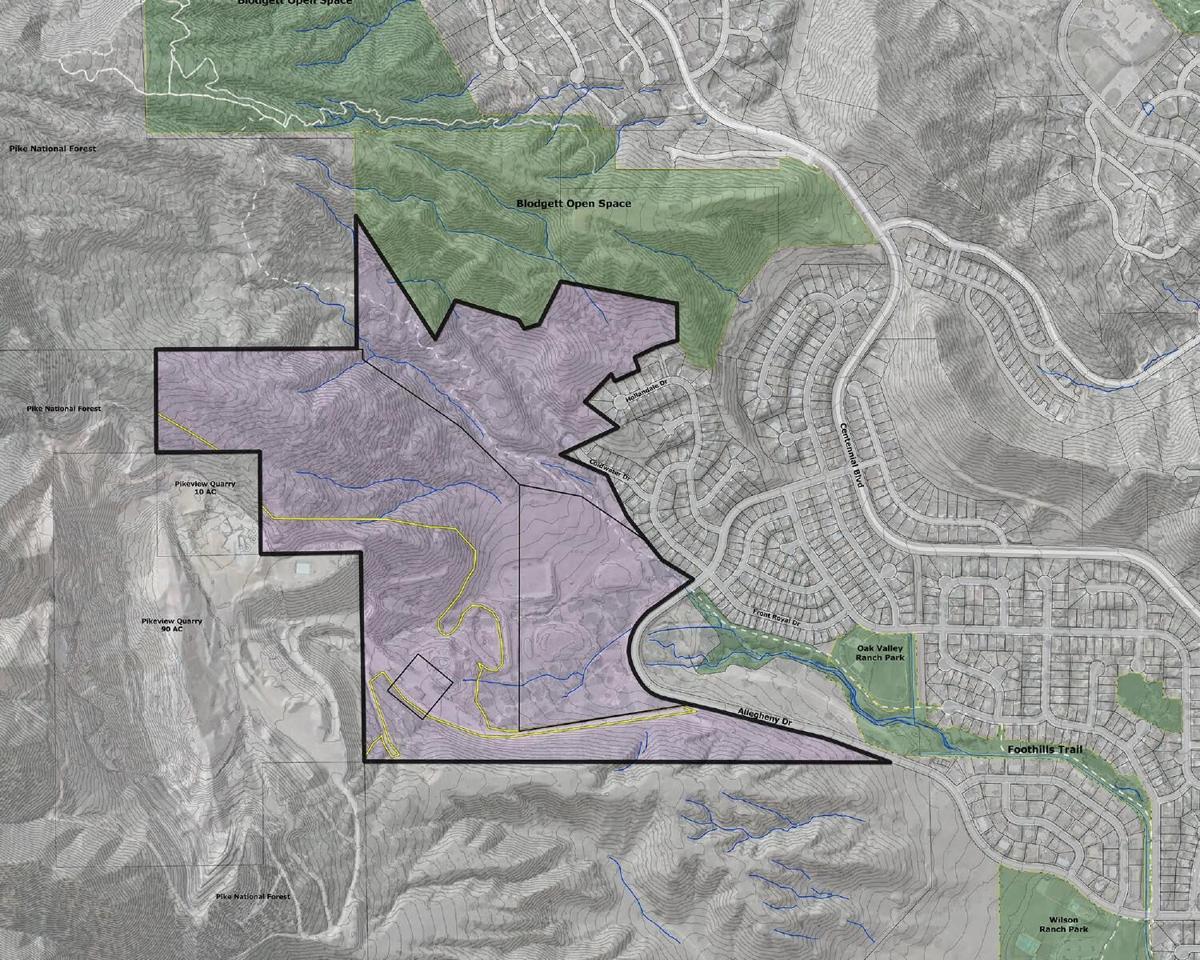 Top soil will be set aside to revegetate the disturbed areas and they will be later reseeded with native grass, she said.

"I have been assured they are not going to leave us a giant pit on our property," said City Councilman Don Knight, who represents northwest Colorado Springs.

The appraisal also took into account the city’s interest in building a bike park on the quarry as a boost to the value of the property the city purchased.

Lee Milner, a member of the city committee who reviewed the purchase, questioned the appraiser’s judgment, but was legally prohibited from sharing details from the document.

“I found it absolutely incredible the way he valued it. … He added value because of the lousy views to the west,” Milner said.

Haley said the analysis in the appraisal was consistent with the market conditions, particularly because it is one of the few developable parcels left on the west side.

"Its ultimate fate could be either open space for the citizens of our community or residential development. I am grateful that open space was the outcome in this case," she said.

The city purchased the Pikeview Quarry and the Black Canyon Quarry, near Manitou Springs, from Castle Concrete as one packaged deal and, in addition to paying the appraised value of both properties, the city agreed to pay about $430,000 extra because property values keep increasing, Haley said at the time.

Other bike parks in Colorado and elsewhere might seem a little tame in comparison to the 800-foot drop in elevation at Pikeview Quarry.

Plus, any trail headed straight down would lend itself to serious erosion, he said.

He would like to see a wide variety of trails to make the area family friendly. Currently, the trails on the city’s frontage property are “great, fun flowy trials,” he said.

To help lay the groundwork for the park, Castle Concrete’s engineering firm, Stantec has assigned recreation planners to help design the excavation of the city’s property so that the city will not have to redo earth work later, Haley said.

“We consider this cooperation and preparation a head start on any future recreational uses,” she said.