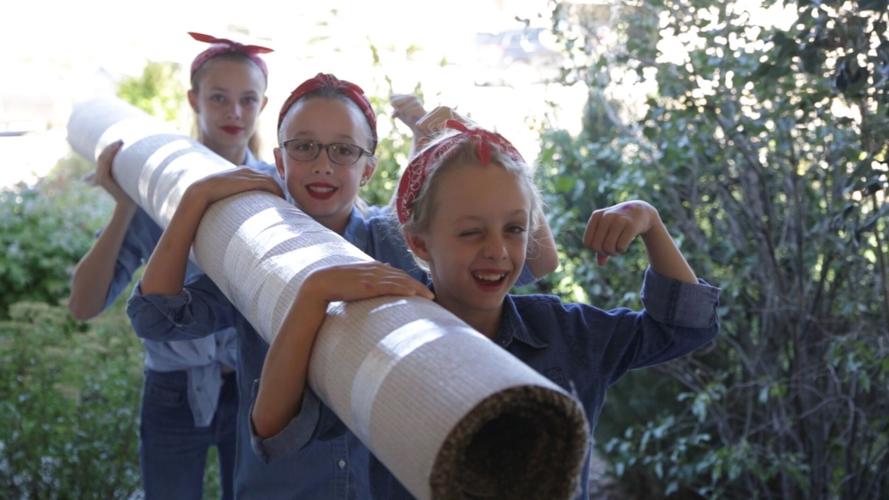 Amelia, Esme and Charlotte Echols, dressed in "Rosie the Riveter" costumes, carry a roll of carpeting in one of IQ Floors' television commercials. 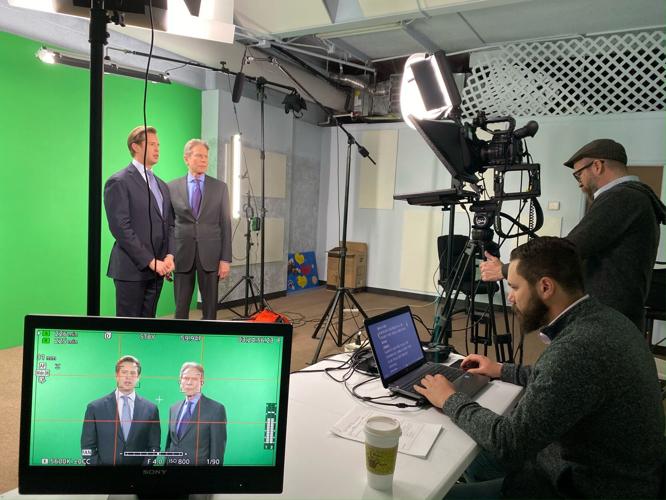 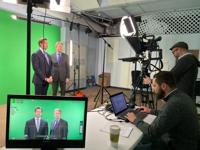 David and Mike McDivitt, stand before a green screen during the filming of a recent television commercial in McDivitt Law Firm's studio at its downtown Colorado Springs offices. 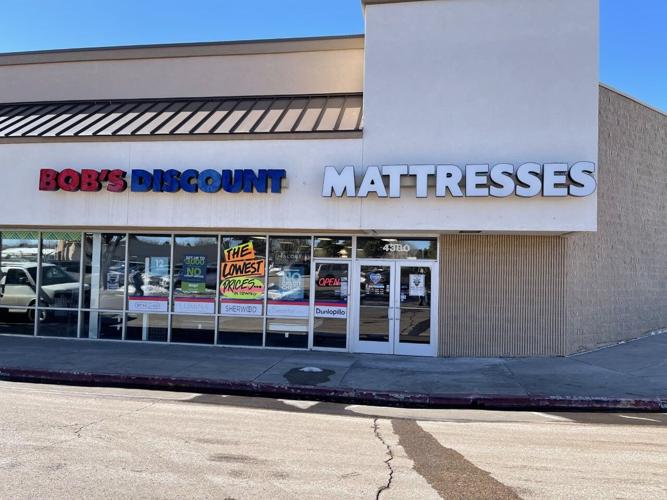 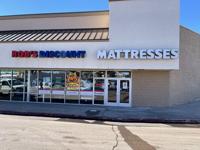 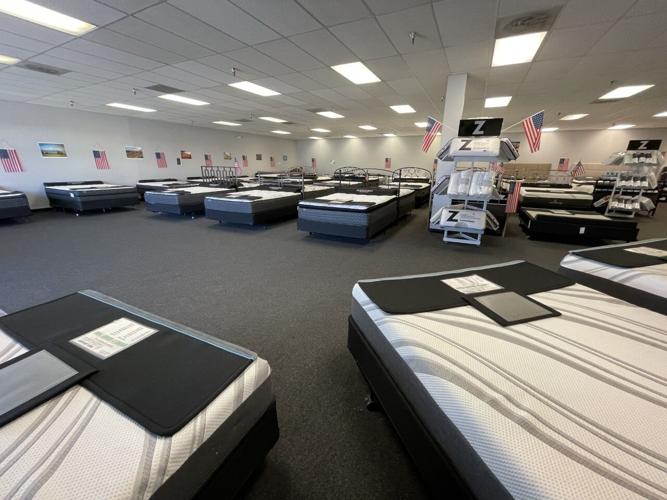 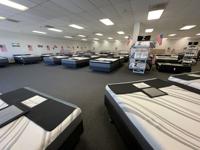 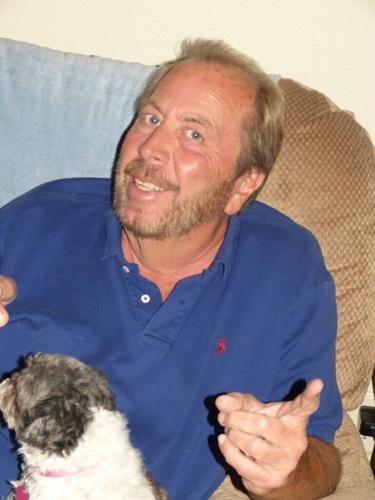 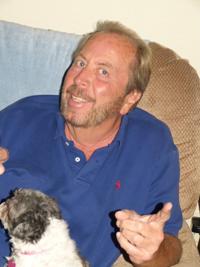 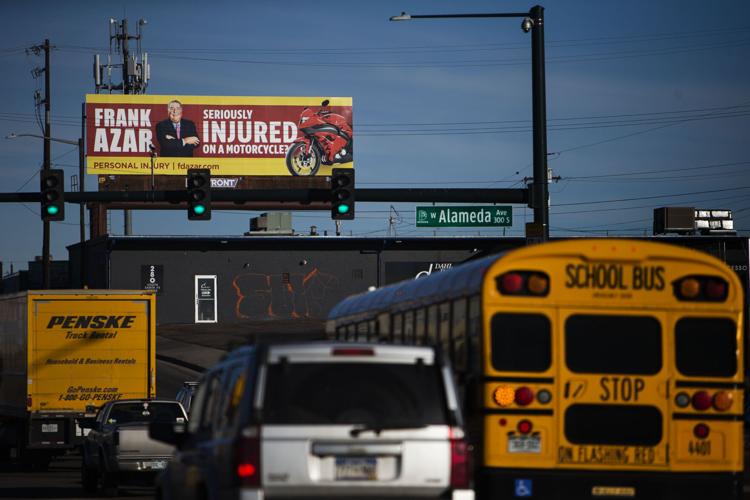 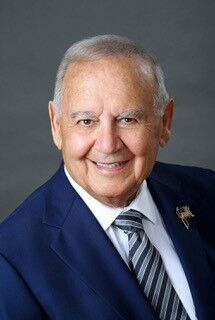 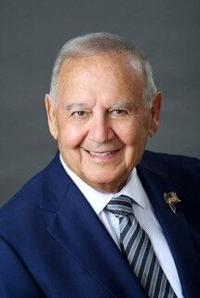 Amelia, Esme and Charlotte Echols, dressed in "Rosie the Riveter" costumes, carry a roll of carpeting in one of IQ Floors' television commercials.

For some, Sunday's Super Bowl will be as much, or more, about the commercials than the action on the field.

Some Super Bowl commercials in the past have launched long-lasting ad campaigns; others have become iconic moments in the history of advertising (Betty White's Snickers ad, the Coke ad with "Mean" Joe Greene, Budweizer's "Wussup").

We're taking this opportunity to spotlight some local advertising icons and longtime campaigns.

The ad is one of a series of commercials that feature Echols' three daughters — Amelia, Esme and Charlotte — wearing "Rosie the Riveter" costumes reminiscent of World War II. The first commercial was a takeoff on a well-known "Friends" episode in which characters Rachel and Chandler are moving furniture and Chandler screams "pivot" numerous times as they try to get a couch up a narrow staircase.

After the commercial aired, Echols said he started getting "hate mail," likely from viewers who had never seen the "Friends" episode. "They said my daughter was being rude to her sisters and we shouldn't put her on television like that. I almost pulled the commercial, but then the positive feedback started and people were saying that they loved it. That ad was our biggest success" — one that later won an award for KKTV.

Echols opened the Colorado Springs company in 2004 as a wholesaler to sell to carpet stores statewide and started making online video ads with his oldest daughter, Amelia, pretending to make snow angels in carpeting. KKTV helped him make the first television spot; the spots have since aired regularly, using all three daughters in their Rosie the Riveter costumes.

Customers, Echols says, "are so excited to tell us that they have watched our daughters grow up" in the advertising series."

All three daughters have worked in the store for several years. Amelia answers the store's phone and sets appointments. But the series will soon change as she heads off to college in a year or so. Echols said the next ad in the series likely will include a hint (in the form of a small suitcase) that Amelia will be leaving the commercials, which will continue with the two remaining daughters, who are 11 and 14.

You can't avoid “The Strong Arm,” Aurora-based personal injury, worker's compensation and product liability attorney Franklin D. Azar, if you tried — his firm’s advertising is on local television in both Colorado Springs and Denver, as well as radio stations, billboards, bus signs and sponsorships for the Denver Broncos, Colorado Avalanche, Colorado Rockies and Denver Nuggets.

Azar said he would choose a different one if he had to choose a moniker today.

“It’s just something for people to remember,” Azar said. “If I would have thought about it longer, I probably would have come up with something different. It just kind of snowballed.”

He’s been using the tag line “Strong Arm” for more than two decades. It started when he worked in Dallas with a former partner. The office was trying to compete with another personal injury law office that used “The Hammer” as its catch phrase.

His former partner never registered the name, so Azar did and brought it to Denver.

“A very small amount of the cases we get is from advertising; 60% or more is from former clients and word-of-mouth,” Azar said. “But also, you have to have your name out there or people forget about you. … We don’t even mention 'Strong Arm' much more in our advertising.”

Azar’s office has grown considerably in those 20+ years. He has more than 60 attorneys on staff, and 12 offices from Fort Collins to Pueblo. He’s a Trinidad native and said his business is strong in southern Colorado.

Asked if he ever gets tired of people calling him “Strong Arm,” or yelling at him on the street or at public events, Azar said no.

“I guess I’d walk down the street naked if it helps someone remember who to call so I can help them out,” Azar said. “I also get a lot of ‘Hey, you’re that attorney on TV.'”

When Bob Weikel roams his mattress store, it’s common for him to hear customers and their kids chirp the business’s slogan, “Bob’s got it!,” as they shop.

Bob’s Discount Mattresses is a locally owned and operated mattress store in Colorado Springs, with one location off Austin Bluffs Parkway and the other off South 8th Street.

Weikel, who transitioned his mattress stores from Mattress World to Bob’s Discount Mattresses after his business partner left the enterprise nine years ago, said it was during that transition that he developed his slogan.

He pondered at the time how he could make the business his own.

From then on, Weikel said he tried to focus his marketing on the fact it’s a local business with all American-made mattresses and low prices.

The Colorado Springs personal injury law firm has been airing its commercials daily since 1989, growing from a single office in La Junta to four locations with 14 attorneys and 70 employees.

Founder Mike McDivitt started the ads as a way to expand beyond La Junta and attract new clients. The commercials, which feature a cartoon frog at the end that croaks "McDivitt," all emphasize that clients don't have to make any upfront payment to hire one of the firm's lawyers, who all work on a contingency basis — meaning they don't get paid until they either win a case or agree to a settlement.

"Through the years, more people (attorneys) are advertising on TV and it is harder to stand out, so somebody mentioned to me that they think of a frog when they hear our name, so we added the frog at the end of the ad," said Lisa McDivitt Bush, the firm's marketing director and Mike McDivitt's daughter (her brother, David McDivitt, works for the firm and also appears in the ads).

The firm used marketing consultant and Methodist minister Rev. Richard Hendry to put together its early commercials and hired a Tennessee advertising agency to boost the production quality. The firm started making its own ads in its studios and production facility at its downtown Colorado Springs office seven or eight years ago, McDivitt Bush said.

"All of our TV ads are intended to convey our sincerity and the seriousness of what we do — we are a compassionate legal team that is accessible to you," McDivitt Bush said. "Mike is still involved in every aspect — he reviews the cases and is in all of the commercials. We use clients in our ads, on occasion, but every situation is different."

Phil Long Dealerships has continued to build its 76-year legacy in southern Colorado with company CEO Jay Cimino at the center of its advertising.

Since 1945, Phil Long Dealerships grew from one dealership to 16 throughout Colorado and New Mexico with more than 1,000 employees and added its own advertising agency known as AdPro 360, the company's website says.

Cimino, who’s been the face of the company in local commercials, joined Phil Long Ford in 1975 and continues to play an instrumental role in the company’s advertising.

“He's still involved in our corporate planning,” said Shawn Flynn, COO and partner of Phil Long Dealerships and founder of AdPro 360. “Every single month, he still has a say, at least at a CEO level, in the advertising that takes place at each of the store level(s) as well.”

Cimino came to Phil Long from a background in business administration and worked his way up the ranks at Phil Long from general manager to CEO, according to the company’s website.

“He's kind of the centerpiece of how we advertise,” Flynn said.

Flynn emphasized the impact advertising on TV, in newspapers and online has on the company and the community and pointed to the outpouring of people who used the free oil changes the company advertised during the pandemic.

“The response from the public was just tremendous,” Flynn said. “Because, you know, it goes to show that those, those mediums are still effective from an advertising standpoint, because the amount of response that we got from the public.”

Perhaps the most unusual commercial still airing in the Colorado Springs area is for Overhead Door, which features a father-son team who sold the business five years ago to an Olathe, Kan., company.

The commercial, which was produced by and featured the late Chuck Baker, was first broadcast 15 years ago and focused on then owner Jim McGuire forgetting his lines and laughing. Kevin McGuire, Jim McGuire's son, said the ad was part of a series of commercials, most with humorous themes, that had started decades ago to build name recognition for the local distributor for the national  garage door company.

"The ad was an enormous success. When we sold the business five years ago to D.H. Pace, they wanted the advertising and didn't want any disruption in the marketplace," Kevin McGuire said. "I didn't put a stop date on the ads and I should have as part of the transition. It makes it look like we still own the company. I still recommend them (to customers), but I have spoken to them several times about (continuing to use the ad). Time needs to march on."

Mike Leonard, general manager for Overhead Door in Colorado Springs, said the company hasn’t “determined how long these ads will continue. No decision has been made.”

Advertisers are paying big bucks to get their names in front of the nation's largest TV audience.  A 30-second network (this year's game will be broadcast on NBC) spot during this year's Super Bowl goes for $7 million, up 27% from last year and more than triple what a commercial went for 20 years ago.  In the local TV market, which includes Pueblo, KOAA-TV reportedly is charging more than $10,000 for its inventory of spots.

If you've lived in the area for some time, you likely remember Jake Jabs, owner of American Furniture Warehouse, wrestling with tigers. Or you've heard Tom Shane, owner of the Shane Co., assuring you “you’ve got a friend in the jewelry business,” or “Dealin’ Doug” Moreland, promising “nobody beats a Dealin’ Doug deal. Nobody.” Or seen the face of attorney Franklin D. Azar, the "Strong Arm," on a bus driving by.

“We call that a persona,” said Darrin Duber-Smith, a senior lecturer at Metropolitan State University of Denver. “They’re either the most well-loved, or loathed, pitch people out there.

Duber-Smith has been teaching the subject for decades, and specializes in issues around Super Bowl advertising. He uses the example of “Flo” for pitch people you either love or hate, but you sure remember Progressive Insurance either way.

“People are annoyed by her, and I think she’s one of the greatest characters of all time,” said Duber-Smith.

Sometimes the persona is the owner of the company, so they rarely have someone telling them when it’s “time to go,” or if the ads aren’t working anymore.

“On the other hand, they wouldn’t keep doing it for decades if it didn’t work,” Duber-Smith said.

Here are some fun facts about the Centennial State.For more Gazette lists, check out our lists page