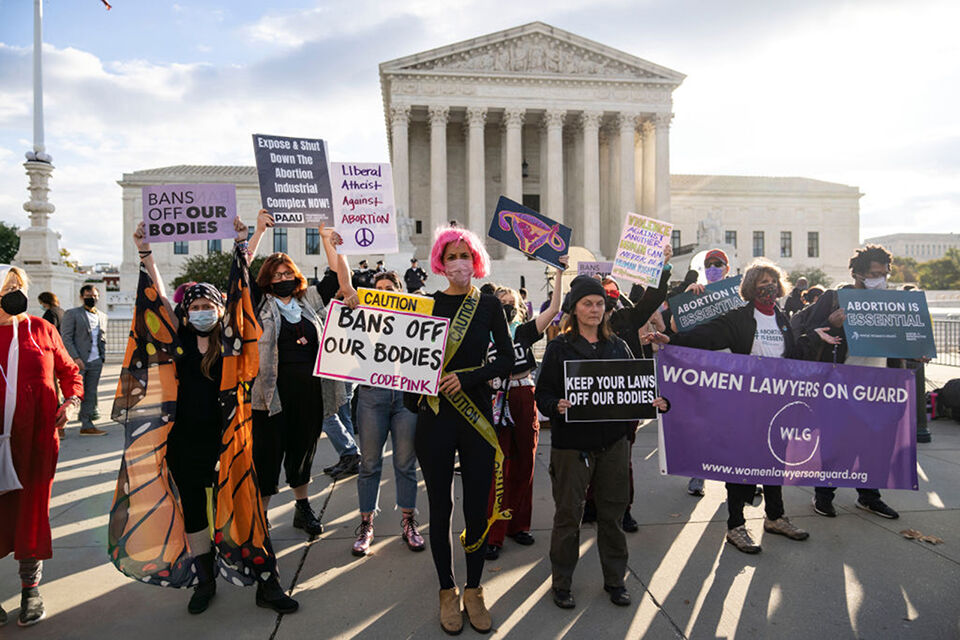 FILE - A group of anti-abortion protesters pray together in front of the U.S. Supreme Court, Dec. 1, 2021, in Washington. President Joe Biden insists that he strongly believes in the rights spelled out in the 1973 Roe v. Wade court decision, which are now under the most dire threat in decades. But he barely uses the word “abortion.” And when his administration has been asked about what it can do to protect reproductive rights, the response has mostly been that Congress must write the landmark court decision into law, a strategy that is highly likely to fail. To the women who rallied to Biden’s presidential campaign in no small part to protect the landmark court ruling, that’s not nearly enough.

FILE - A group of anti-abortion protesters pray together in front of the U.S. Supreme Court, Dec. 1, 2021, in Washington. President Joe Biden insists that he strongly believes in the rights spelled out in the 1973 Roe v. Wade court decision, which are now under the most dire threat in decades. But he barely uses the word “abortion.” And when his administration has been asked about what it can do to protect reproductive rights, the response has mostly been that Congress must write the landmark court decision into law, a strategy that is highly likely to fail. To the women who rallied to Biden’s presidential campaign in no small part to protect the landmark court ruling, that’s not nearly enough.

This is the 49th year for people who oppose abortion to gather for rallies and marches recognizing the January anniversary of the 1973 U.S. Supreme Court decision to legalize abortion in all states.

It’s a pivotal time, anti-abortion advocates say, with the possibility of the nation’s highest court overturning Roe v. Wade this year and giving states, not the federal government, control of abortion availability.

“We want more people who’ve maybe been sitting on the sidelines to see the importance to step up now more than ever,” said Diane Ferraro, CEO of the Colorado Springs-headquartered Save the Storks, a nationwide Christian nonprofit that operates mobile medical buses for pregnant women to receive free ultrasounds and other care.

Denver’s annual "Celebrate Life" rally begins at 1 p.m. Saturday at the west side of the Capitol building, followed by a march at 2 p.m.

This year's theme is “Honoring Courageous Mothers," and the event is hosted by the Catholic Archdiocese of Denver and Respect Life Denver.

Such rallies “give voice to the voiceless,” said Focus on the Family President Jim Daly.

“It’s an opportunity to pray and gather with a diverse group of people who are dedicated and committed to empowering women and reminding the community that life is the better choice,” he said.

Speakers and prayers for the unborn and pregnant women will be followed by a procession to Corpus Christi Catholic Church.

The National March for Life, with a concert, rally and march to Capitol Hill, happens Jan. 21 in Washington, D.C., with activities around the theme, “Equality Begins in the Womb.”

This year "promises to be the most consequential in the history of the pro-life movement,” said Daly, whose Colorado Springs-headquartered Christian organization supports families worldwide through various media.

Focus on the Family representatives will march and pray in Denver and Washington, D.C., he said. Ferraro plans to be at both events, too.

She joined like-minded activists on the steps of the U.S. Supreme Court building on Dec. 1, when the justices upheld a Texas ban on abortions after six weeks of pregnancy and indicated they would uphold a Mississippi law that bans abortions after 15 weeks of gestation.

The court’s 1973 decision, which was reaffirmed in a 1992 ruling, allows states to regulate but not prohibit abortion up to the point of fetal viability, at about 24 weeks.

With the Supreme Court's 6-3 conservative bent, this is the first time that unseating the longstanding law of the land seems in reach, supporters say.

In preparation, her organization, which was founded in 2012, is working to ensure pregnancy centers are equipped to serve a potential influx of clients.

"I encourage people to see how they can help their local pregnancy centers and maternity homes by furnishing apartments, paying for first and last months' rent, and making sure the woman is supported so when the baby arrives, she's ready," Ferraro said.

Daly said pro-life advocates need to gear up to support birth mothers before, during and after birth.

“The local church is in a unique position to provide housing, job training and other practical assistance,” he said. “We must work to make adoption an easier and more attractive option for both birthparents and adoptive mothers and fathers, encouraging and affirming the adoption tax credit.

“We must continue to champion pro-life laws in family-friendly states, recognizing these states will become a magnet for people to move to.”

If the Supreme Court were to rescind Roe v. Wade, there’s almost a 50/50 split among states that would either make illegal or limit abortion, or strengthen abortion laws.

Given the prevailing political winds, 26 states, mostly across the South and Midwest, could move to ban abortion, said Whitney Phillips, vice president of brand experience for Planned Parenthood of the Rocky Mountains.

If that were to happen, 36 million women, nearly half U.S. females between the reproductive ages 18-49, “could lose abortion access,” she said in an email, citing an estimate from the National Black Women’s Reproductive Justice Agenda.

“At Planned Parenthood, we stand with patients and will never back down,” Phillips said. “Abortion care is health care, and access to abortion care is essential.”

The new Texas restriction has prompted women seeking abortions to travel to other states.

Planned Parenthood of the Rocky Mountains, which operates 24 health and community centers in Colorado, New Mexico and southern Nevada, has seen 550 patients from Texas seeking abortion services since Sept. 1, said Neta Meltzer, spokeswoman for the organization.

The numbers reflect “a 1,200% or even 1,500% increase in Texas patients seeking abortion care compared to the same period of time last year,” she said in an email.

“We're doing everything we can to provide care to every patient who walks through our doors,” Meltzer said.

Women who can’t afford to abortion costs can apply for patient-assistance funds, she added.

Organizations such as the Cobalt Abortion Fund provide “the overwhelming majority” of travel money to out-of-state patients, Meltzer said.

Money donated to the independent fund pays for abortions “without judgment or question” to women unable to pay the full cost, according to Cobalt’s website.

Even if Roe v. Wade and its issues of personhood and personal rights are removed, the divide between those who oppose abortion and those who favor it will remain, said Raul Reyes, president and founder of Life Equip Global. The Colorado Springs-based Christian organization teaches pastors and church leaders in 10 countries on how to respond with compassion and hope to a pregnant woman in crisis.

“If all sides could share what they believe and not demonize the other side, we would see that ultimately, we all care about people and each other, and we should try to build bridges and work together,” Reyes said.

He laments the “political playground” the issue has become, saying if Roe v. Wade is tossed out “it will light a fire under the pro-choice movement, and unfortunately, the division will deepen, and I don’t think ultimately it’s going to change behavior.

“It’s not laws that change hearts. It’s the will of God.”

Said Daly: “We cannot predict what will happen but with prayer, God’s favor and hard work, we can deserve the victorious outcome we are praying for.”

Thousands of anti-abortion activists gathered at the Denver Capitol building Saturday to mark the Jan. 22, 1973 U.S. Supreme Court decision that allowed for legalized abortion in all 50 states.