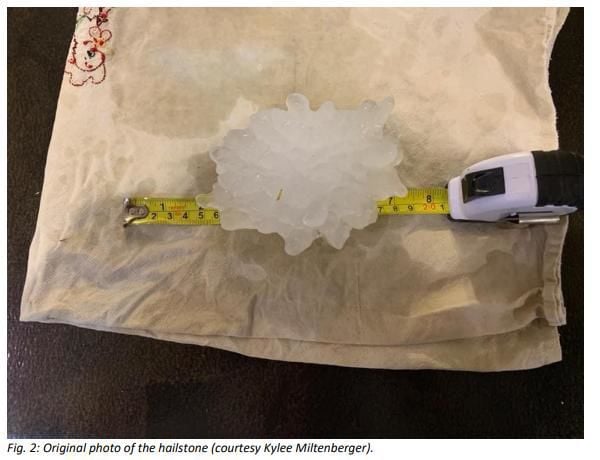 This photo of the largest hailstone was provided by Kylee Miltenberger of Bethune via the Colorado Climate Center. 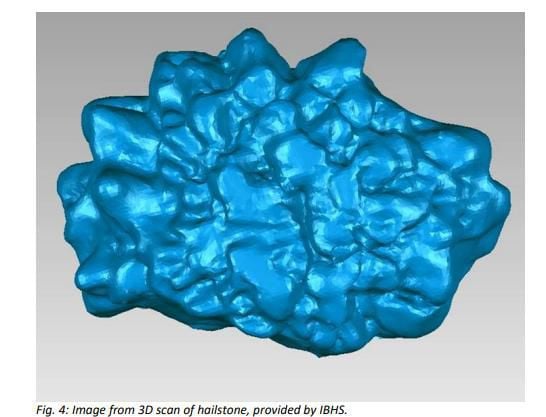 3D image of the Bethune hailstone that fell on Aug. 13. Image courtesy of the Insurance Institute for Business and Home Safety.

Colorado’s largest hailstone ever has been certified by state weather experts, and a second record — for the hottest day in state history — is days from being official.

The 8.5-ounce hailstone fell Aug. 13, 8 miles north-northwest of Bethune on the eastern plains. Its diameter measured 4.83 inches, bigger than a baseball.

The Colorado Climate Center at Colorado State University reported the record, saying the hailstone was produced by a “supercell” thunderstorm that hit Kit Carson County. The State Climate Extremes Committee, with representatives from the National Weather Service, examined several large hailstones, including the record-setter.

The previous, unofficial record was 4.5 inches in diameter. Huge hailstones have fallen in Colorado about 20 times since the mid-1900s, the center reported.

The record hailstone fell near the home of Kylee Miltenberger, whose family found several large hailstones after a 3 p.m. storm Aug. 13. Photos posted to social media, first reported by KKTV of Colorado Springs, indicated the record-breaking stone was even larger than was recorded by the State Climate Extremes Committee, since Miltenberger picked up the stones about 30 minutes after they fell after waiting out the dangerous thunderstorm.

The Colorado Climate Center estimated the hailstone’s original size at larger than 5 inches in diameter, based on the social media posts.

The hailstone was sent to a cold lab at the National Center for Atmospheric Research in Boulder for preservation and further study, including a 3D laser scan.

The other likely record for Colorado this summer was the 115-degrees temperature recorded at John Martin Reservoir in Bent County on July 19 by Ian Livingstone of US Tornadoes, a tornado-tracking service.

At the other end of the thermometer, the state’s record low of minus-61 degrees was set Feb. 1, 1985, in Maybell, in northwestern Colorado.

Verifying the record for the hottest day is more complicated than measuring a hailstone, said Becky Bolinger, assistant state climatologist.

“If you save the hailstone, anyone can measure that. Measurements are easy,” Bolinger said. “When you’re talking about temperature, there are nuances.”

You could put three thermometers in the same spot to see if they all come up with the same reading, she said. Officials also had to determine whether the sensor works at such a high temperature and what the observer recorded.

There’s also a question about siting. The sensor that recorded 115 degrees was in a sandy area, though the preferred sensor site is a grassy, open field, Bolinger said.

Another factor could be temperatures in the area, including nearby Lamar, which recorded a high that day of 111 degrees.

The climatologists checked the sensor by putting it in an oven at CSU in 115-degree heat. The sensor, it turns out, was accurate.

“We feel more certain about this than previous records,” Bolinger said.

Then the decision on whether to certify the hottest temperature was put to a vote by Bolinger, State Climatologist Russ Schumacher, a meteorologist from the National Weather Service in Pueblo, and representatives of the High Plains Regional Climate Center, the National Oceanic and Atmospheric Administration and the National Center for Environmental Information.

All agreed the 115-degree reading was valid.

The record becomes official when NOAA publishes the report, sometime this week, she added.

The Colorado Climate Center attributes the extremes to the state’s “interior continental location, combined with complex topography” that “results in dramatic climate differences from place to place and from year to year.”

12-plus inches of snow expected on Pikes Peak this week

Colorado is about to get its first big snowfall of the season, with parts of the state likely to get 8 to 12 inches or more by Friday.