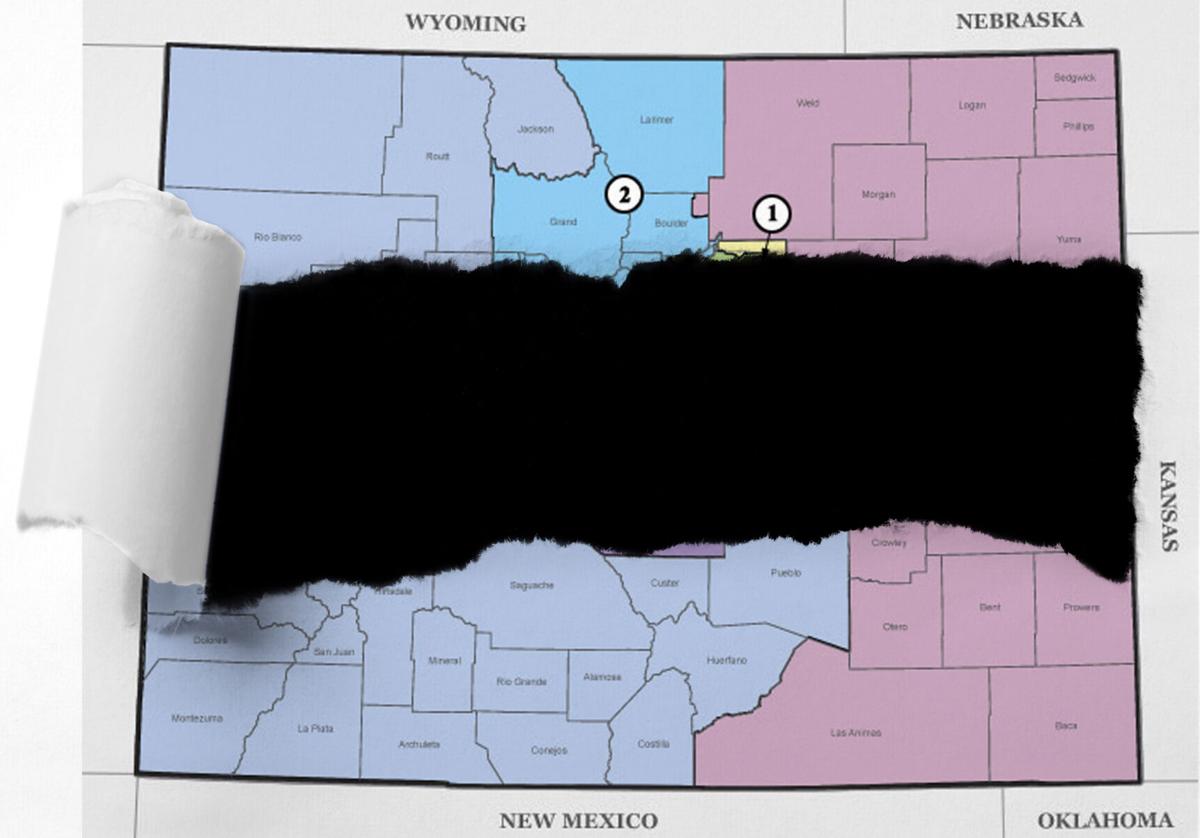 Colorado’s independent redistricting commissions are complete, but they are running into issues. Data needed to draw maps have been delayed, and some commissioners have been criticized for perceived political biases. 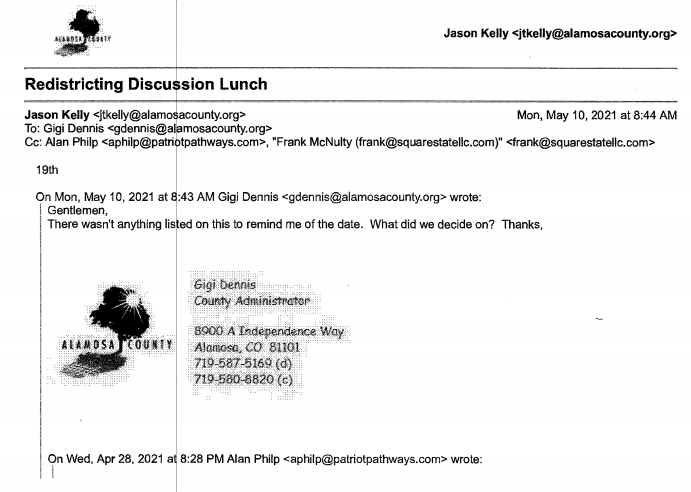 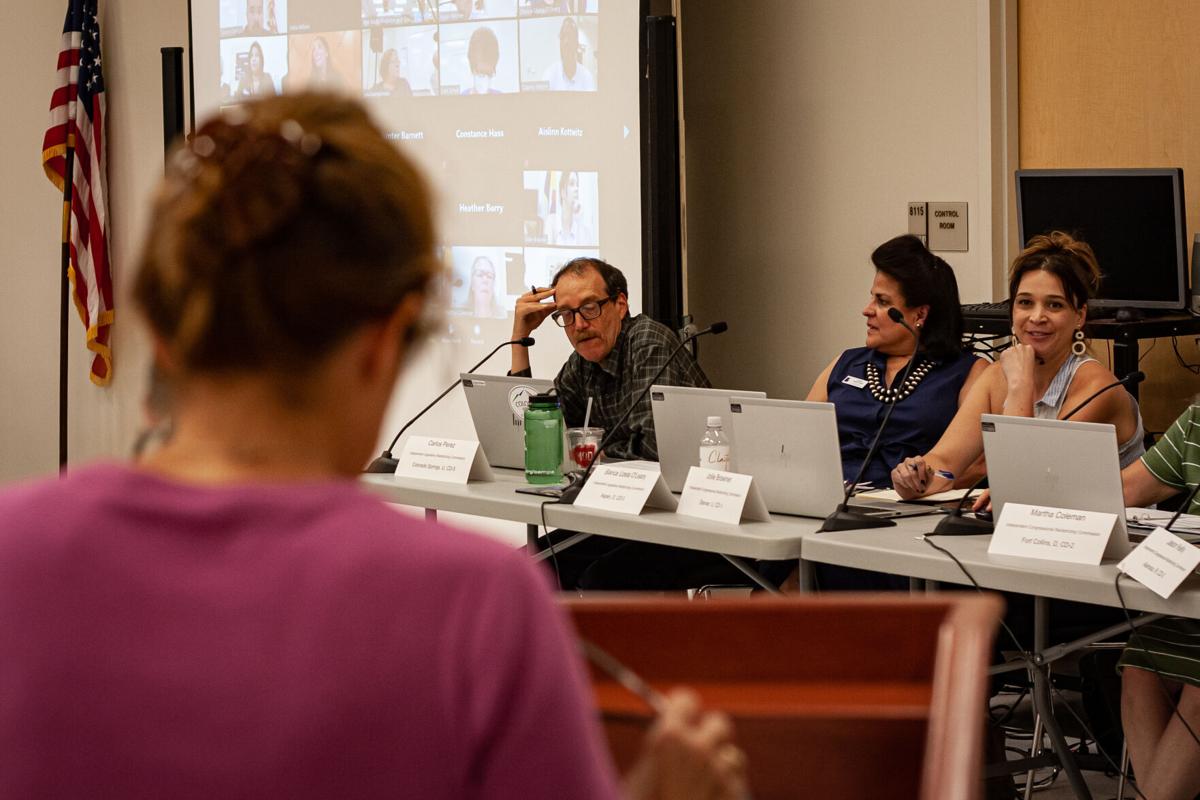 Rep. Matt Soper, a Delta Republican, explains during a July video training event for Western Slope Republicans, how they can try to persuade redistricting commissioners to draw him and other Republican incumbents friendly districts, under the guise of “community of interest” arguments.

Colorado’s independent redistricting commissions are complete, but they are running into issues. Data needed to draw maps have been delayed, and some commissioners have been criticized for perceived political biases.

An investigation into whether a secretly funded nonprofit organization has been illegally lobbying the state’s redistricting commissioners will move forward, after the secretary of state reviewed a complaint filed against the group and found enough evidence to warrant a full probe.

The decision to further investigate Colorado Neighborhood Coalition, the 501c4 nonprofit organization run by longtime Republican operatives at the center of the complaint, could have broad implications for the transparency now required around the redistricting process, and comes after several efforts to influence the redistricting commissions without full transparency have emerged.

The state's inaugural independent citizen redistricting commissions are in the middle of redrawing the state’s legislative and congressional maps, after the overwhelmingly voter-approved passage of the new system in 2018, which was designed to remove the process from the hands of politicians and the political class.

The lobbying rules that came with the new independent citizen commission system are also new, and designed to shed light on the once-per-decade political remapping process, which in most states is kept behind closed doors and outside public scrutiny.

The complaint cited examples of Philp addressing the commissioners, but without filing disclosures describing his interactions with them, as well as a private meeting with a congressional redistricting commissioner in May. The complaint details each interaction Philp had with the commissioners at public hearing, in addition to providing as exhibits emails that reference a lunch meeting with Alan Philp, Frank McNulty, Republican congressional redistricting commission member Jason Kelly and Alamosa County's Republican county administrator, Gigi Dennis, on May 19.

“Partisan Democrat secretary of state decides to move forward with a baseless complaint by partisan Democrat operatives. I’m disappointed, but not surprised," Philp wrote in an email in response to the announced investigation.

Philp added that he believes he was told in an email by the Secretary of State's Office, after the complaint was filed, that his disclosures were sufficient. A spokesperson for the secretary of state late Tuesday said that the secretary and deputy secretary "were not involved in the investigative phase of this complaint and have had no input at this stage." 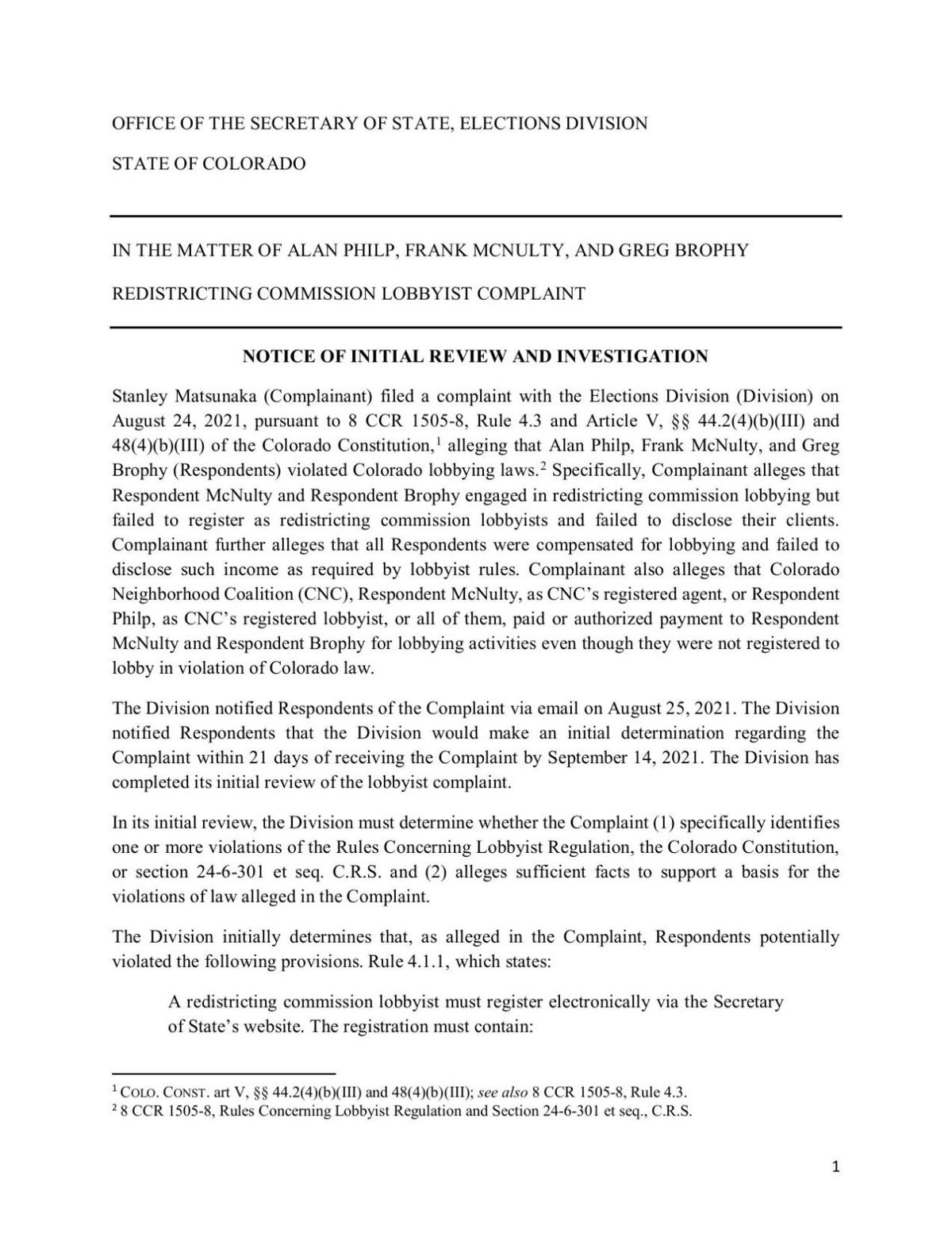 Colorado Neighborhood Coalition is one of a handful of 501c4 nonprofit organizations that has registered to lobby the redistricting commissions. It's not required to disclose where the group's money comes from because of its special 501c4 IRS status. When 501c4 nonprofit groups spend in elections, they're called "dark money" groups.

The newly launched investigation comes after several examples surfaced this summer of efforts aimed at influencing the commission's work without full transparency or disclosure.

Democratic Secretary of State Jena Griswold’s election division found that the complaint “identified one or more potential violations of Colorado lobbying laws and alleged sufficient facts to support a basis for the alleged violations,” a letter detailing the initial findings explained. “The division will investigate to determine whether these alleged violations occurred.”

McNulty, the registered agent for the group, has previously defended the group’s lobbying disclosures, as well as his and Brophy's obligation to register as lobbyists, saying he believes having Philp registered as the formal lobbyist for the organization is sufficient, even if others being paid by the group are organizing people to advocate for specific mapping approaches. Philp, McNulty said, is who directly communicates with the commissioners, even though others paid by the group are doing community outreach, education and awareness.

The complaint focuses on McNulty's earlier characterization of Colorado Neighborhood Coalition's activities, by citing the same emails referencing a lunch meeting where McNulty, Philp, Kelly and Dennis were invited, saying it's evidence of direct communication between a commissioner and McNulty. The complaint also cites McNulty's Aug. 18 testimony at a redistricting commission public hearing, saying that because he's paid by Colorado Neighborhood Coalition, his activity needs to be registered as lobbying.

Philp addressed the redistricting commissioners earlier this month, after the complaint was filed, presenting maps that Colorado Neighborhood Coalition.

Brophy also met with commissioners, during a public meeting in May, mostly to discuss his experience as a lawmaker working on redistricting 10 years ago. But during the discussion, he also discussed current mapping ideas for the congressional map. The complaint claims that, along with Brophy's encouragement to others to advocate for specific mapping ideas, qualifies as lobbying that is required to be reported.

The complaint was drafted by Mark Grueskin, a Democratic operative who himself is a registered redistricting lobbyist. He also works for a 501c4 nonprofit organization, called Fair Lines Colorado, which also does not disclose its donors.

In early July a longtime Democratic operative registered his consulting company as an official redistricting lobbying client after The Gazette asked about one of the agency's employees providing talking points to someone giving public testimony they claimed was their own.

Later that month, an incumbent Republican state lawmaker told supporters how to make mapping suggestions that would protect himself and other Republican incumbents, but without telling the commissioners that was the goal.

In August, the Colorado Farm Bureau proposed a legislative map to the commissioners, telling them that only their staff had worked on the maps, before later acknowledging to The Gazette that they had been helped with the maps by Colorado Neighborhood Coalition.

About one in every seven public comments submitted to the redistricting commissions matches verbatim to others.

The map coming Thursday could be the state's final congressional map for a decade.

"I don't take this endorsement lightly, and I am proud to fully support Eli Bremer for my former seat in the U.S. Senate."