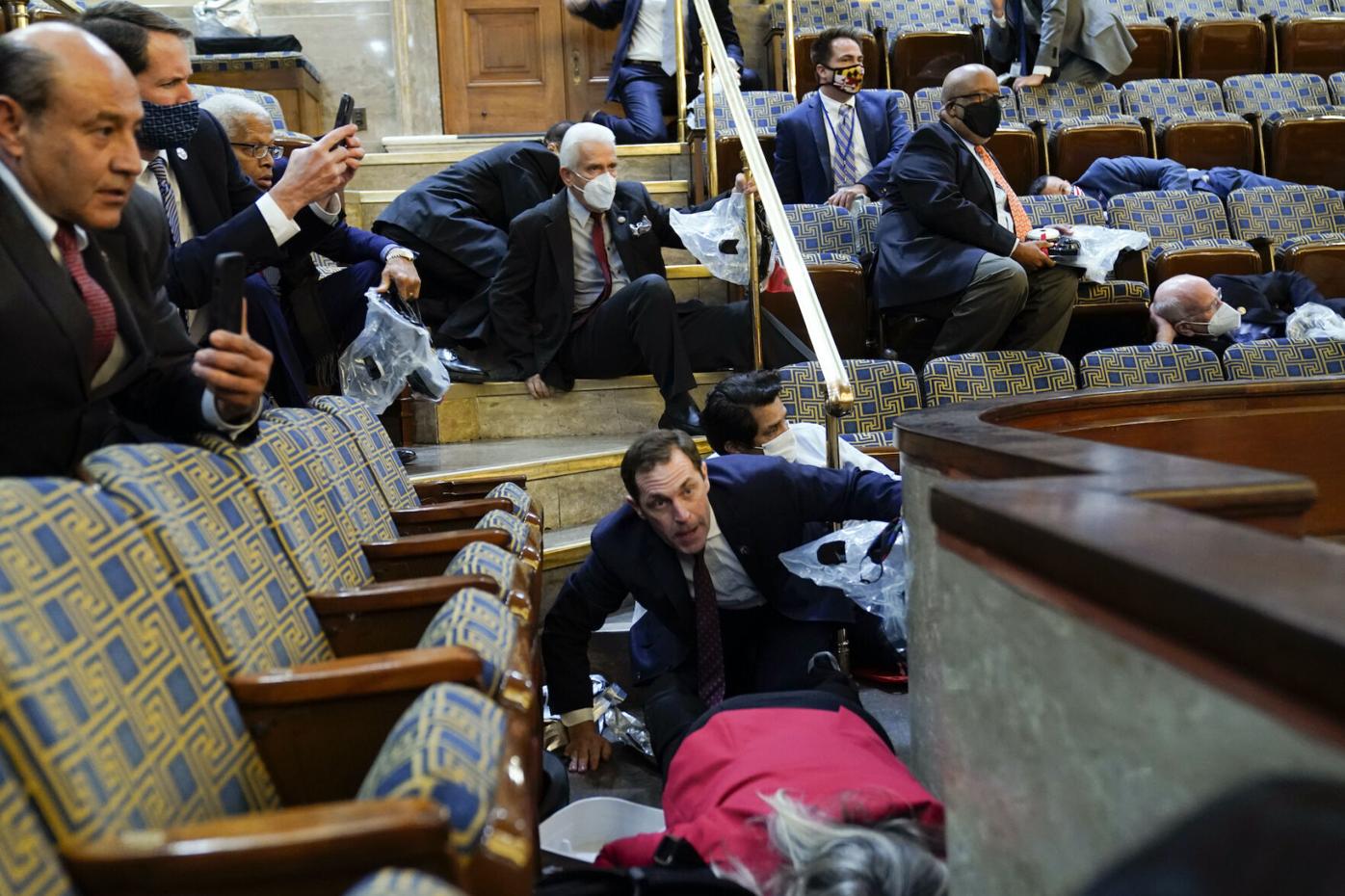 In this Jan. 6, 2021, file photo, people including U.S. Rep. Jason Crow, D-Aurora, center, shelter in the House gallery as violent protesters loyal to then-President Donald Trump try to break into the House Chamber at the U.S. Capitol in Washington. 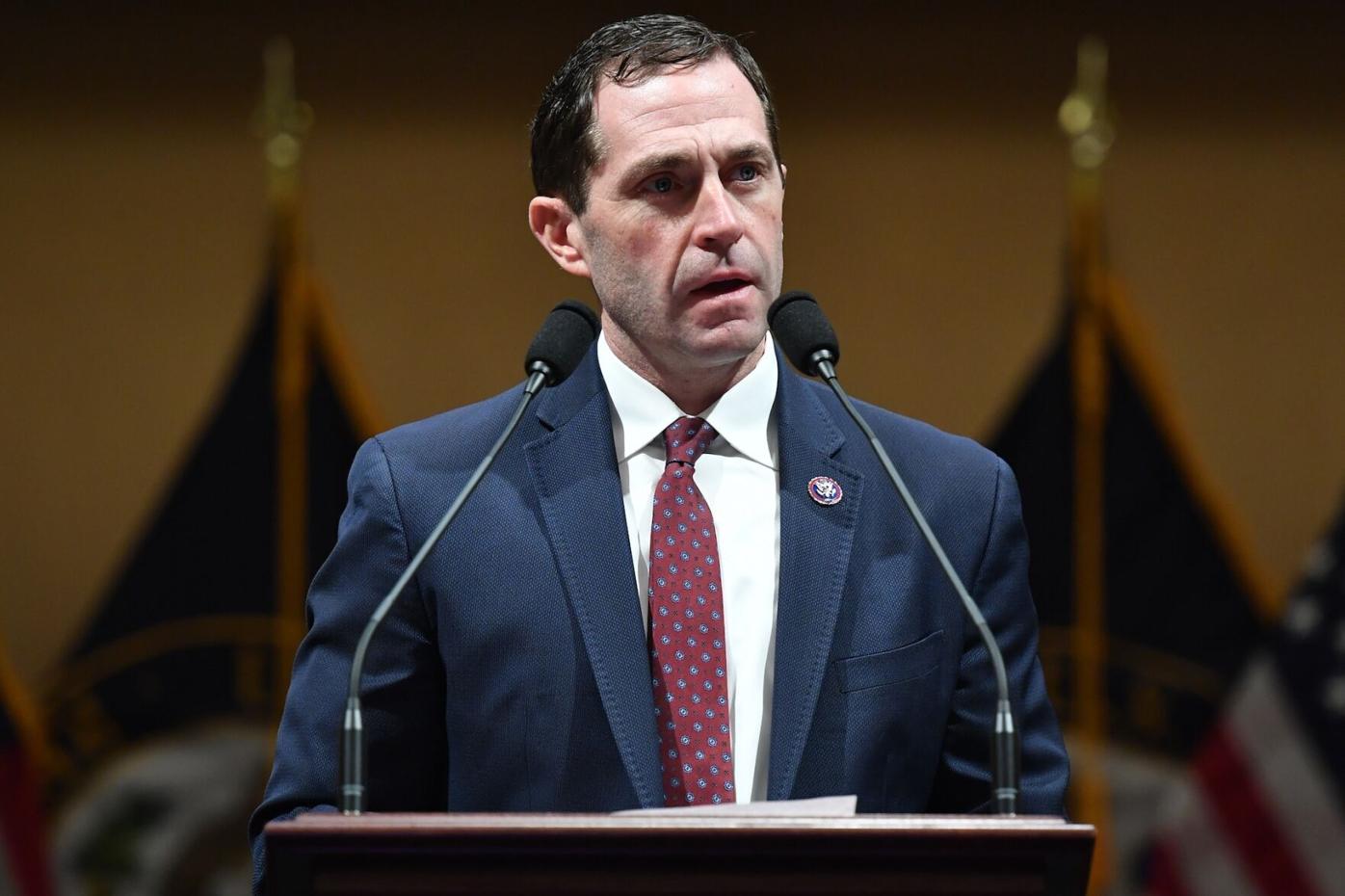 U.S. Rep. Jason Crow, a Centennial Democrat, speak as Democratic House members share the recollections on the first anniversary of the assault on the U.S. Capitol in the Cannon House Office Building in Washington, D.C. on Thursday, Jan. 6, 2022.

On the one-year anniversary of the Jan. 6 attack on the U.S. Capitol, Colorado elected officials — including many who were inside the Capitol when it was stormed by a mob of Trump supporters — marked the occasion by asking the American public never to forget it, while others dismissed its comparison to momentous events in history.

U.S. Rep. Jason Crow, the Centennial Democrat who was trapped for a time, along with fellow lawmakers in the House gallery, introduced legislation on Thursday with Minnesota Rep. Dean Phillips to commemorate the date as Democracy Day.

The resolution asks the president to issue an annual proclamation calling on Americans to commemorate the "tradition of successful and democratic transitions of presidential power and honoring the sacrifices of those who have preserved this hallmark of United States democracy," Crow said.

“We must never forget the disturbing events in our nation’s Capital on Jan. 6, 2021," Crow said in an online news conference. "I saw with my own eyes just how close we came to losing our democracy. As we reflect on the one-year anniversary of this violent insurrection, each one of us must recommit to the founding ideals of our republic. I look forward to celebrating Democracy Day in the years to come as a symbol of that recommitment every year and I’m proud to work with my friend and colleague, Congressman Phillips, to make it happen."

Crow also presided over a series of brief speeches delivered by House Democrats reflecting on the events at the Capitol a year ago.

"We could have lost our democracy in 2021, but we have the opportunity in 2022 to save it," said Crow after his colleagues had concluded.

U.S. Rep. Doug Lamborn, a Colorado Springs Republican, dismissed some of the grandiose remarks made by Democrats about the anniversary.

"Comparing Jan. 6 to Pearl Harbor and 9/11 is repugnant and totally non-comparable," tweeted Lamborn, who was among House Republicans who objected a year ago to certifying Biden's election win. "It comes as no surprise that this comparison comes from the same individual who helped bail-out rioters and looters that committed federal crimes, destroyed American cities and besieged federal property."

U.S. Sen. Michael Bennet delivered a speech on the Senate floor framing what he described as a stark decision facing Americans in the wake of the attack.

“This is our choice. We either save this democracy, which I believe we will, or we let it go," Bennet said. "And it's going to be on us. And if we let it go, generations of Americans are going to indict us for that. And if we save it, I think they'll celebrate the work that we did here just as we celebrate the work of the people that came before us that made our country more democratic, more fair and more free."

Added Bennet in a tweet: "Make no mistake: One year ago today, our democracy suffered a near death experience."

He added: "I will spend the rest of my days fighting to protect our democracy. It is the work of our lifetimes."

January 6 commemorations in Denver squashed by cold, lack of interest

"What we cannot ever forget is that Jan. 6 is not a one-off, unique event," Colorado Attorney General Phil Weiser said on Tuesday during a virtual roundtable discussion hosted by Crow about the status of the country's democracy. "It was an effort to undermine the peaceful transition of power, which means it's one of the darkest days in American history. That had never happened before, and it could happen again."

"It's hard to believe it's been one year since this dark day in our nation's history," Neguse tweeted, along with a video clip of his remarks concluding the trial. "What I said on the Senate floor remains true: What happened on Jan. 6 can happen again if we do not take the necessary measures to protect our democracy."

U.S. Rep. Diana DeGette, the Denver Democrat who worked alongside Neguse as one of nine House managers prosecuting the impeachment trial, said in a tweet: "Despite President Trump and his supporters' deadly attempt to thwart our democratic process, our democracy held. As Americans, it's now up to all of us to do our part to not only protect our democracy, but strengthen it and ensure no rogue president can ever threaten our country again."

In a statement, U.S. Rep. Ed Perlmutter also recalled the riot and its aftermath.

“One year ago, our democracy faced an unprecedented attack — a direct attack on liberty, on freedom and on people’s right to vote," he said. "It was also an attack on individuals, many of whom were career public servants and law enforcement officials. The heroic efforts that day by U.S. Capitol Police and other law enforcement agencies to protect the U.S. Capitol and defend our democracy allowed Congress to reconvene that night to certify the 2020 election and support a peaceful transition of power. The Jan. 6, 2021, attack was a dark moment in our nation’s history, but we cannot forget resiliency and democracy ultimately prevailed."

To be a political columnist and not note the one-year anniversary of Jan. 6 is akin to visiting the Sistine Chapel and failing to look up.