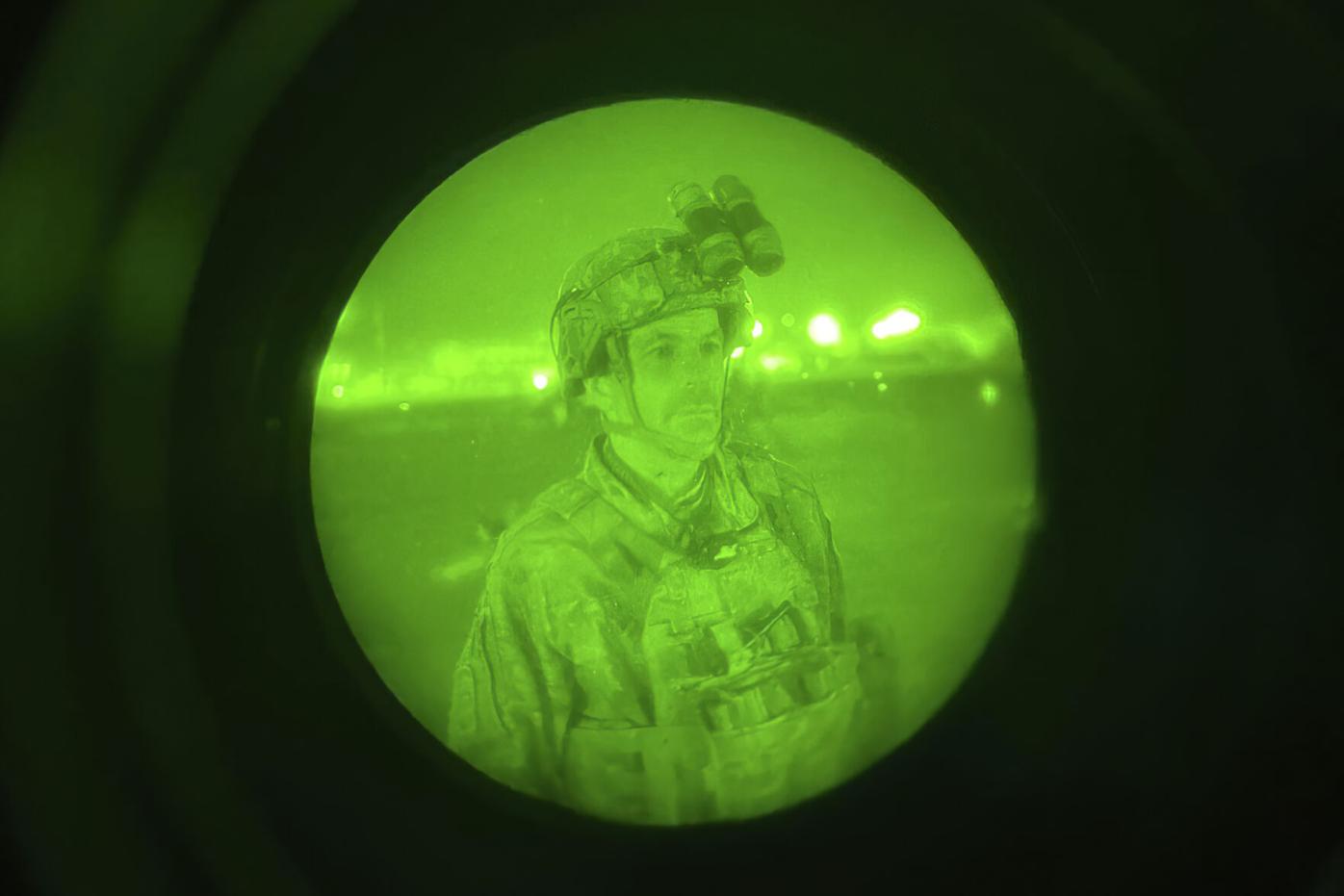 In this image made through a night vision scope and provided by the U.S. Army, Maj. Gen. Chris Donahue, commander of the U.S. Army 82nd Airborne Division, XVIII Airborne Corps, prepares to board a C-17 cargo plane at Hamid Karzai International Airport in Kabul, Afghanistan, Monday, Aug. 30, 2021, as the final American service member to depart Afghanistan. (Master Sgt. Alexander Burnett/U.S. Army via AP) 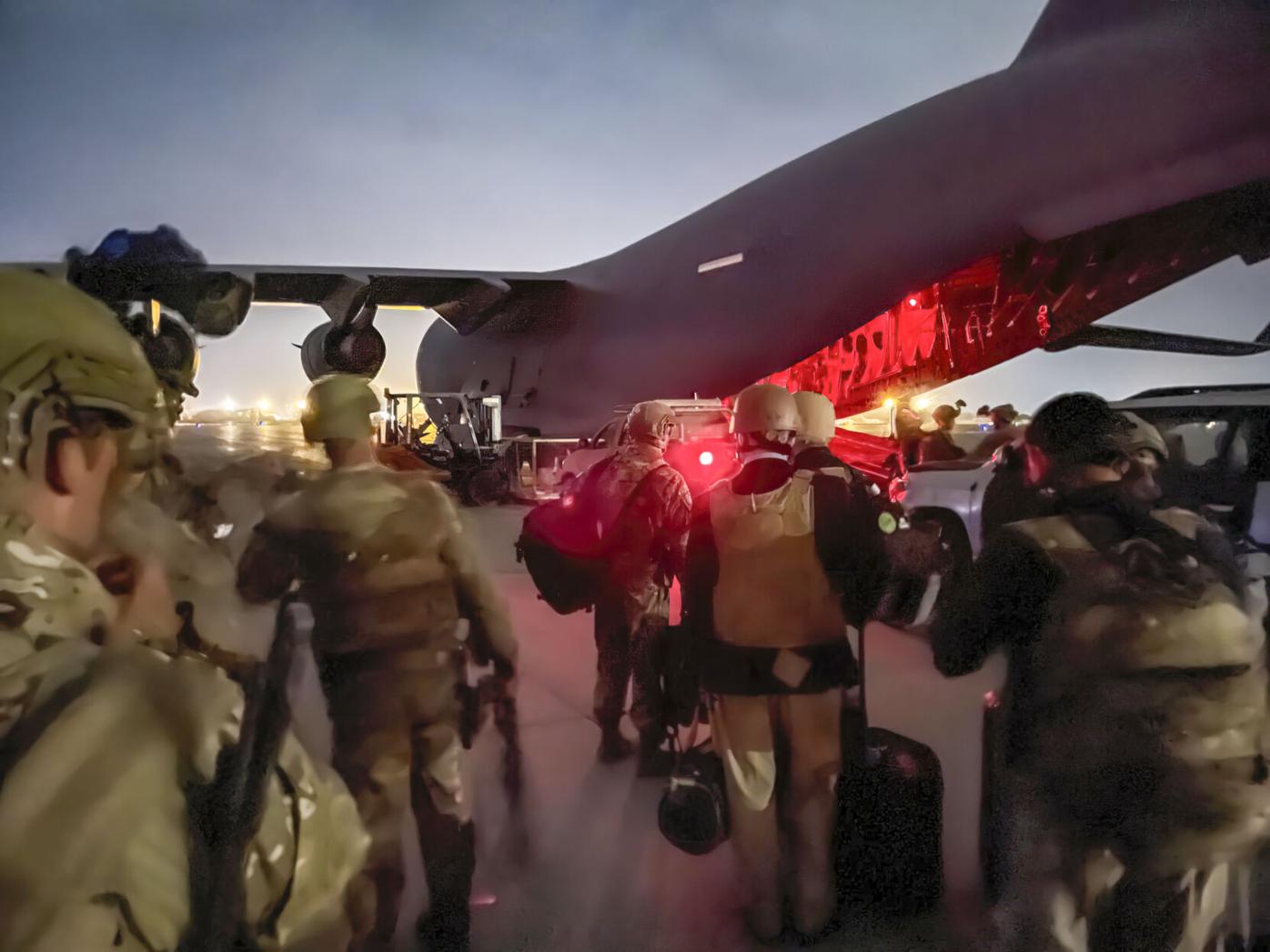 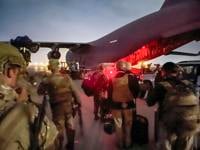 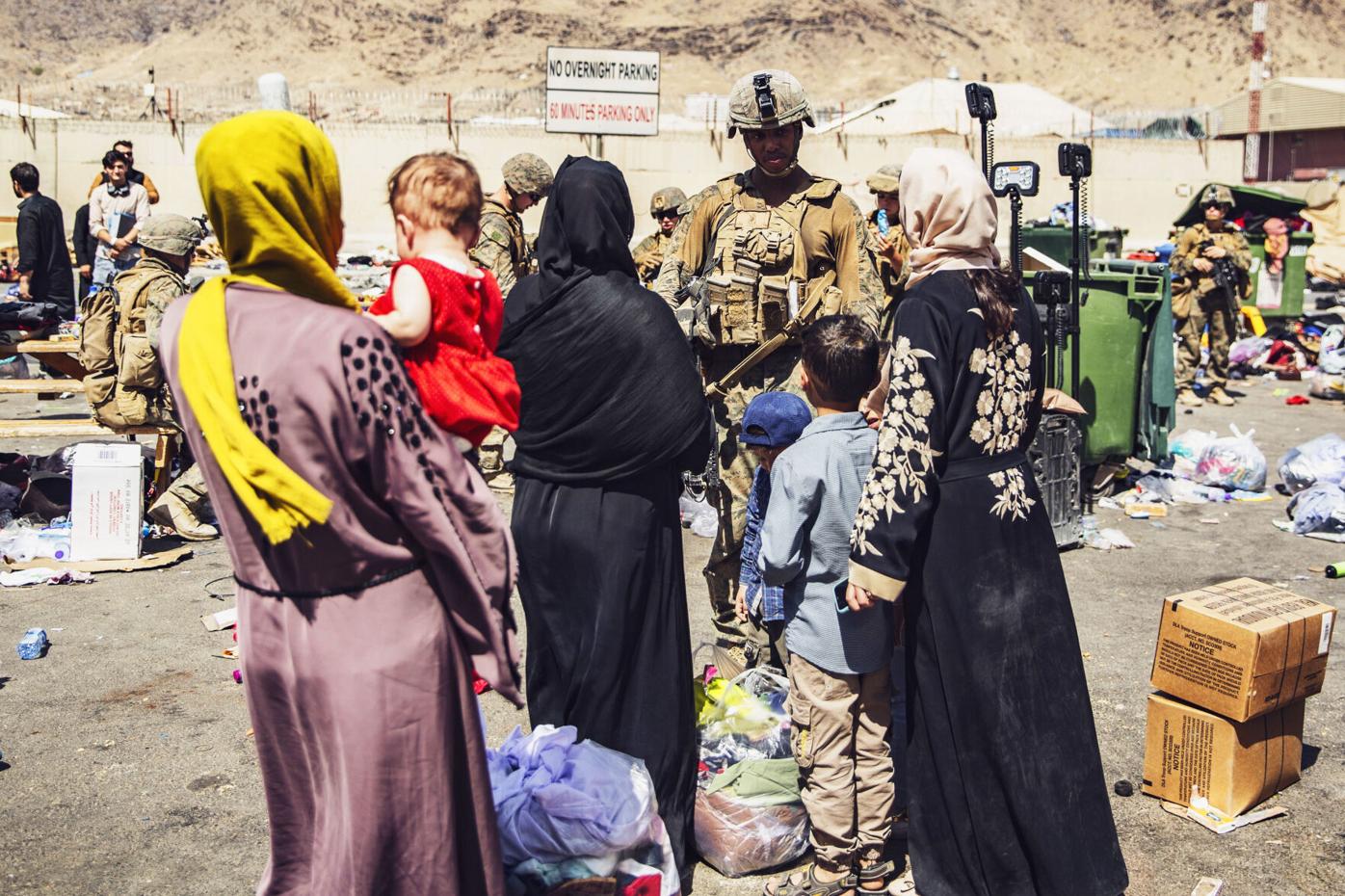 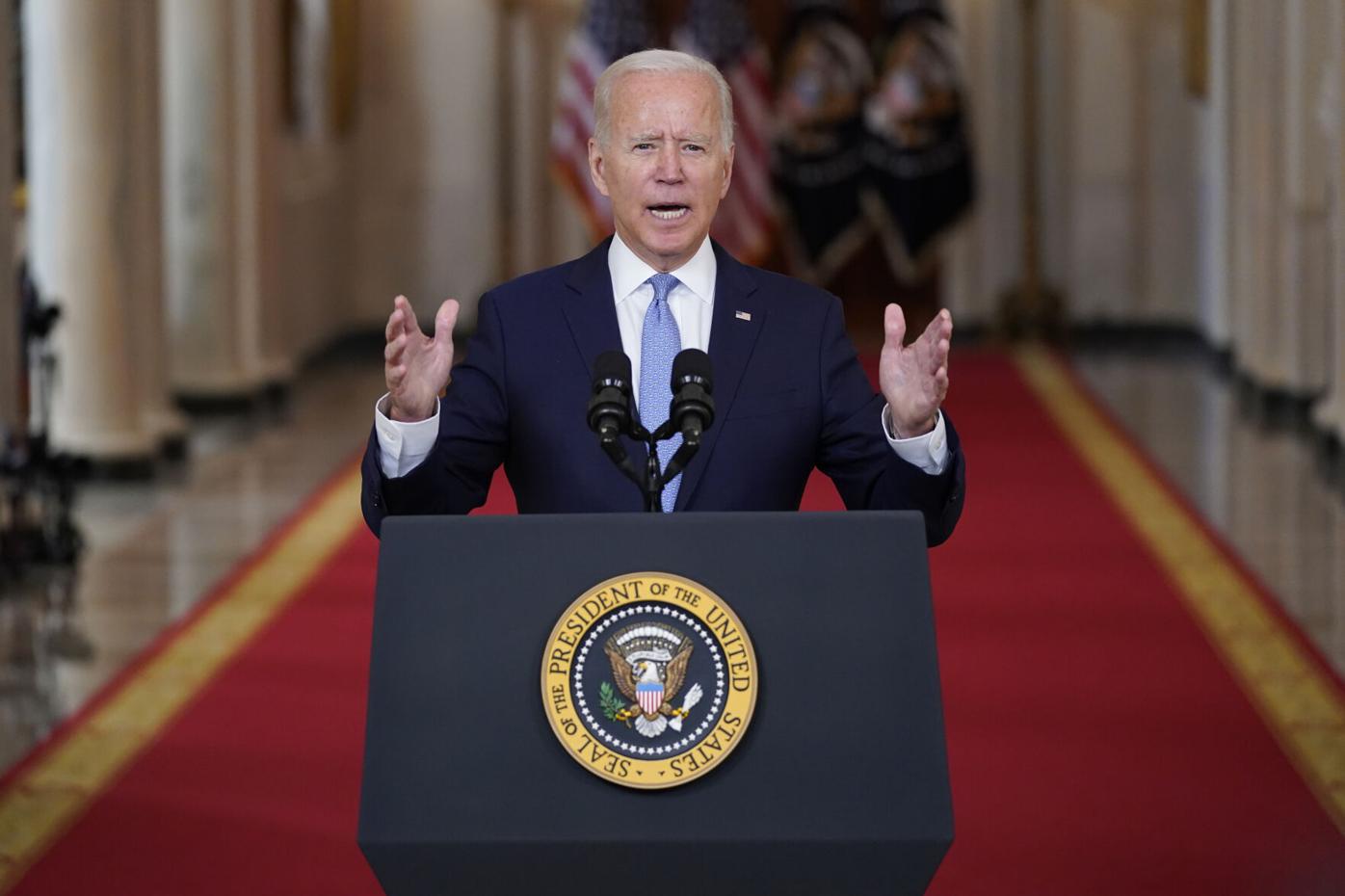 President Joe Biden speaks about the end of the war in Afghanistan from the State Dining Room of the White House, Tuesday, Aug. 31, 2021, in Washington. (AP Photo/Evan Vucci) 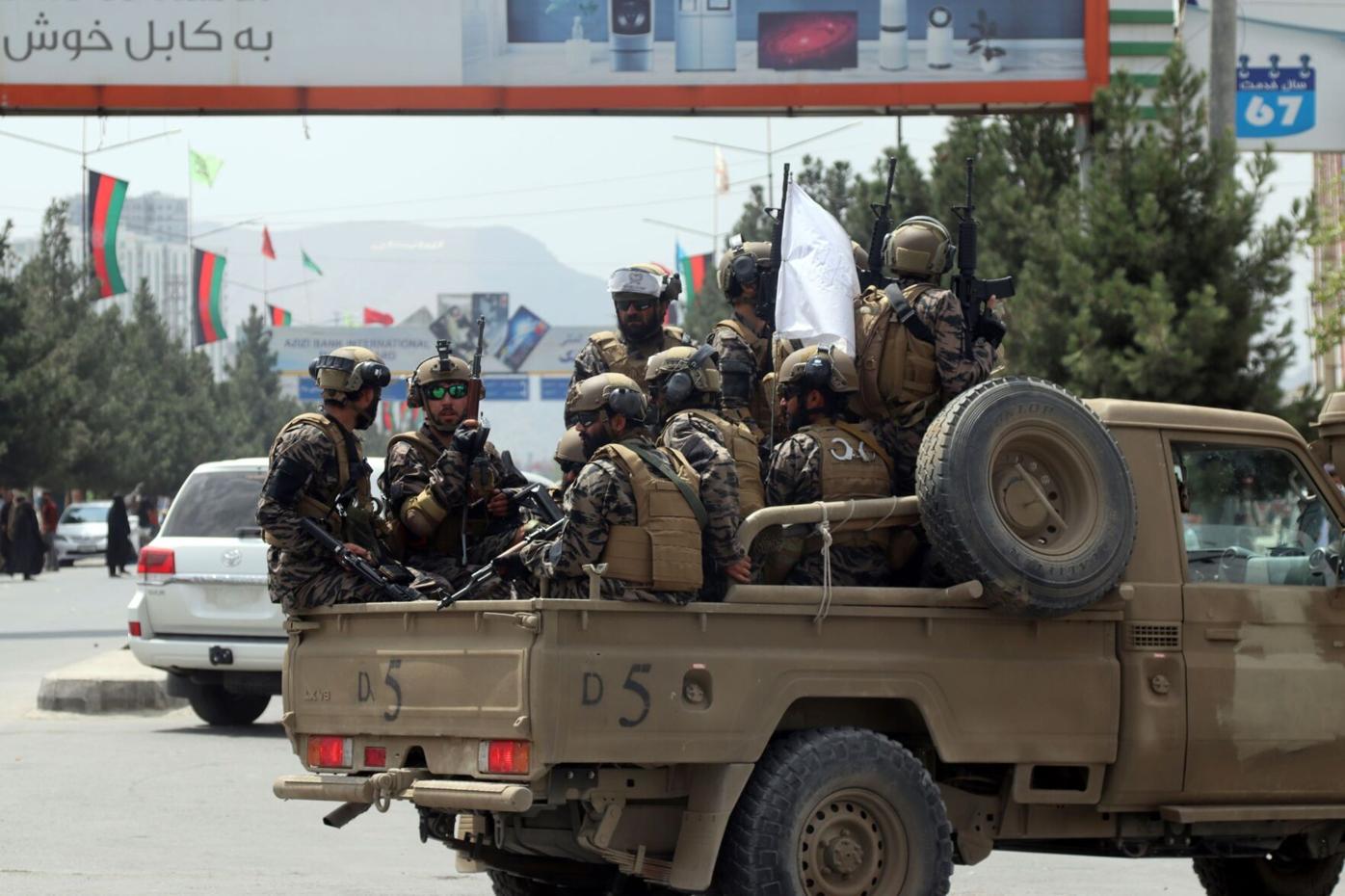 In this image made through a night vision scope and provided by the U.S. Army, Maj. Gen. Chris Donahue, commander of the U.S. Army 82nd Airborne Division, XVIII Airborne Corps, prepares to board a C-17 cargo plane at Hamid Karzai International Airport in Kabul, Afghanistan, Monday, Aug. 30, 2021, as the final American service member to depart Afghanistan. (Master Sgt. Alexander Burnett/U.S. Army via AP)

President Joe Biden speaks about the end of the war in Afghanistan from the State Dining Room of the White House, Tuesday, Aug. 31, 2021, in Washington. (AP Photo/Evan Vucci)

America’s response to the 9/11 terrorist attacks and the resulting nearly 20-year military occupation of Afghanistan ended Aug. 30 when a final soldier boarded an aircraft, leaving Kabul and the country to the Taliban.

In a 16-day period beginning Aug. 15, when the Taliban stormed into Kabul, taking control of the entire country, the U.S. airlifted over 120,000 people from the Kabul airport to safety.

More than 100 Americans and thousands of Afghans who assisted the U.S. during America’s longest war still want out, and President Joe Biden promised diplomatic efforts to make it happen.

Nearly 2,000 Fort Carson soldiers deploying to Iraq. 'It is a challenge and an opportunity'

The Gazette spoke with two veterans to get their perspective. Here is what they had to say.

Omar Lopez was an artilleryman with Fort Carson’s 3rd Armored Cavalry Regiment and part of the initial invasion of Iraq in 2003. He was shot down in a chinook helicopter on Nov. 2, 2003. Of the 36 aboard, Lopez said he was one of 16 survivors.

Lopez said he is a survivor of a “harsh war” that was more mentally than physically challenging. Post-traumatic stress disorder has impacted him and many of the people he served with. He’s lost friends fighting in both Iraq and Afghanistan and is conflicted on how the war ended.

“I know that it’s easy for people on the outside to say, ‘We need to get out of there,’ but it is different when you had a best friend who sacrificed his life for this war,” Lopez said. “It seems that our sacrifice was in vain when we are leaving a country and leaving men behind. Why the rush? The objective was to complete the mission, and I feel like our mission was not complete.”

Stacy Studstill worked in Army intelligence from 1987 to 1995. For 10-plus years following 9/11, the 52-year-old Monument resident was a contractor in Iraq and Afghanistan, working to combat terrorist operations and later, counterinsurgency on behalf of the Defense Intelligence Agency.

Watching on television as Taliban retook control of Afghanistan over the past month was difficult for Studstill and many veterans to witness.

“Disappointment isn’t the right word to describe it,” Studstill said. “It’s kind of a combination of anger and disgust that we chose to exit.

“I was talking to my fellow veterans, and a lot of the feeling is disorientation. You don’t believe this happened and there is kind of an emptiness inside. Essentially it is a grieving process. Grieving for friends that you lost … grieving for the 13 lost last week. Grieving for the parents and families.”

With reports of Taliban going door-to-door looking for those that aided the U.S., Studstill is worried about their safety.

“I think there is going to be some very unpleasant bloodletting … as they exact a lot of revenge on these folks,” he said.

Studstill is also concerned about the mental health of his fellow veterans. Seeing Afghanistan back under control of the Taliban — which provided safe haven for al-Qaeda, mastermind of the 9/11 attacks — has been difficult for many veterans to face.

“I talked to a lot of combat veteran friends of mine who had two or three tours. … The PTSD that they had gotten well under control over the last several years had started to flare back,” he said. “Four friends of mind have gone back for treatment at the VA.”

As a patient himself, Studstill is worried the mental health system may become overwhelmed. He doesn’t want to see additional lives lost to suicide because veterans can’t get the care they need.

“It is difficult to get in to see a psychiatric care specialist right now,” he said.

Senators across the country are hearing about the need for mental health options for veterans as well.

A letter signed by 35 U.S. senators, including Colorado’s Michael Bennet and John Hickenlooper, was sent to Veterans Affairs Secretary Denis McDonough on Tuesday, asking that the VA quickly develop a comprehensive outreach plan to connect Afghanistan and Global War on Terrorism veterans to mental and behavioral health services.

“These service members deserve and earned the support that they need,” wrote Bennet, Hickenlooper and the others. “We appreciate the VA’s commitment to providing mental health services to all veterans and ask, in light of the current situation, that the department accelerate its efforts to provide resources — to veterans of these recent conflicts.”

Fort Carson gets a new commander

Father of Marine killed in Kabul describes Biden 'barking' at him, tense stare-down: 'Why are you arguing with me?'

The father of a Marine Corps lance corporal had a tense encounter with President Joe Biden after he agreed to meet with the president at Dover Air Force Base following his son's death in Kabul, he said.