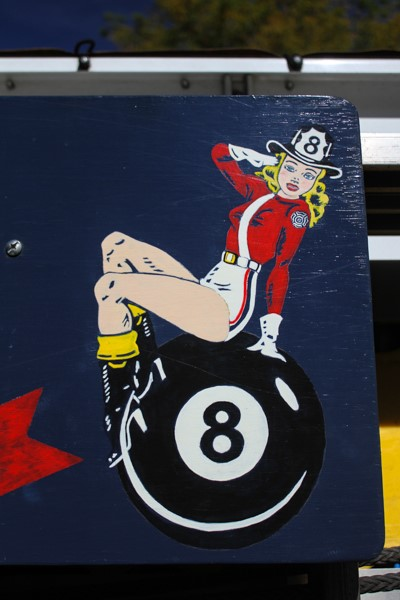 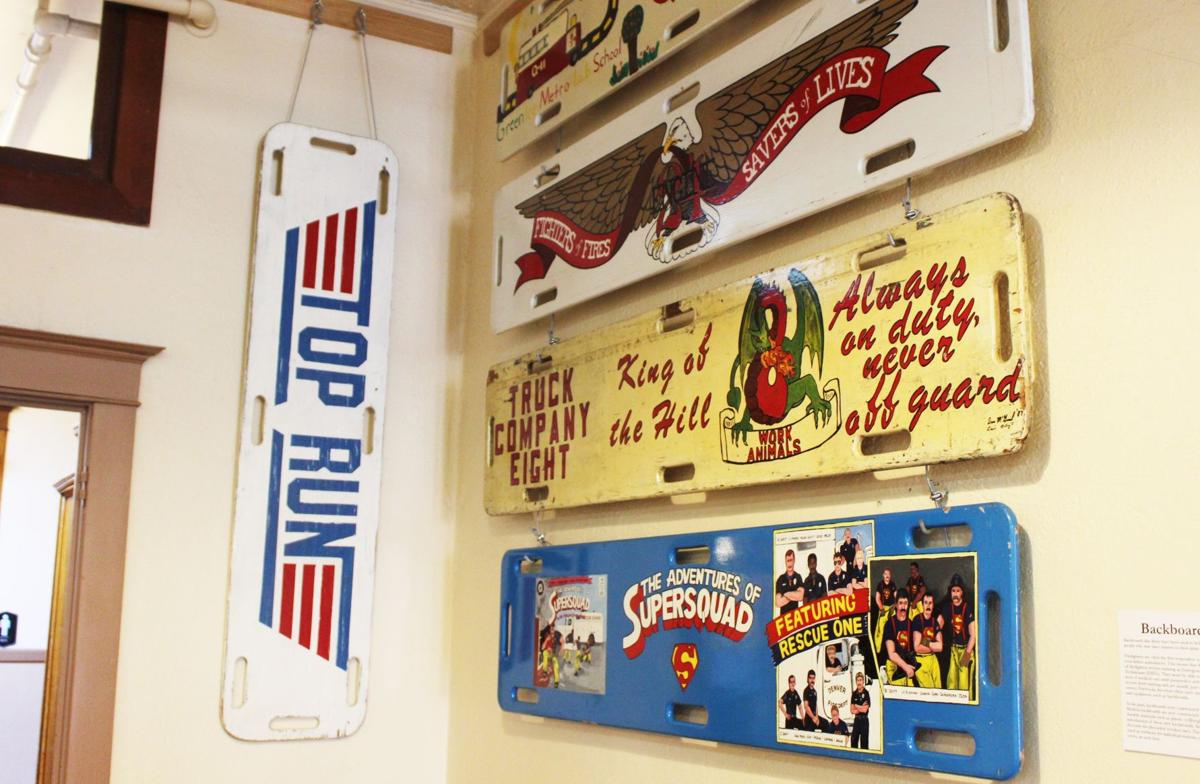 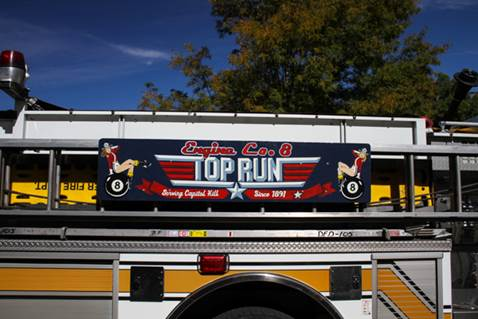 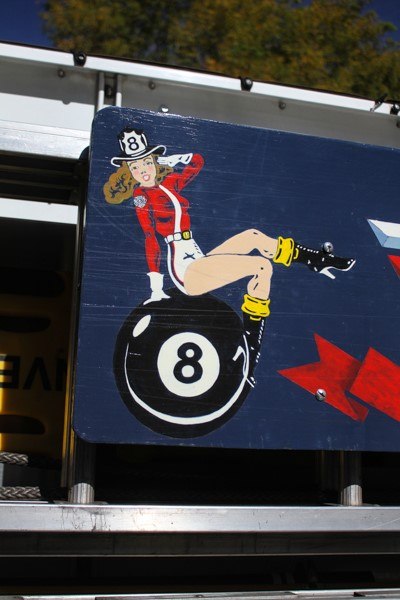 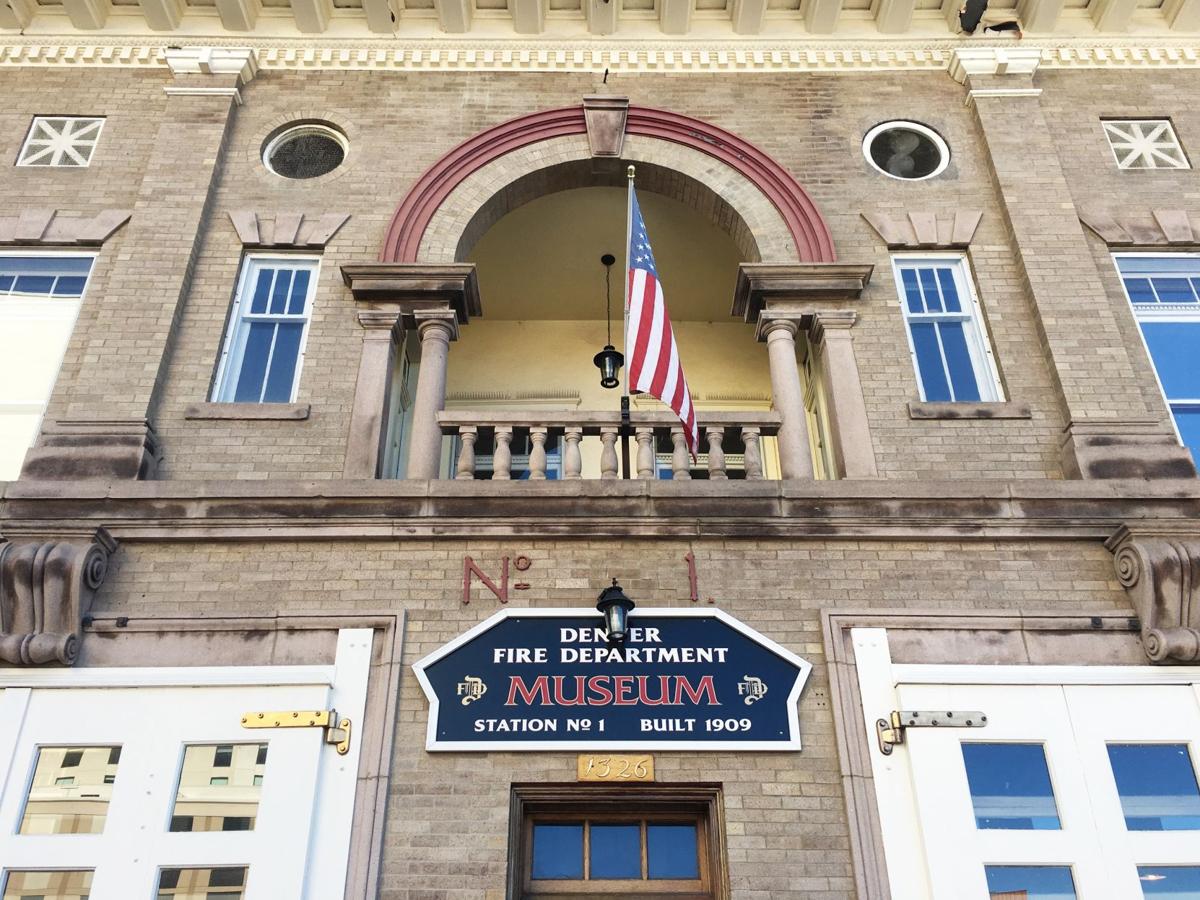 Outside of the Denver Firefighters Museum on Oct. 28. The museum sells Denver Fire Station 8’s logo on T-shirts within the museum and through its online gift shop.

DENVER • In the wake of the #MeToo movement and multiple gender discrimination lawsuits, the city’s fire department decided last year to disallow the use of Fire Station 8’s logo, featuring women in revealing clothing sitting on eight-balls.

The logo, which was inspired by World War II-era nose art commonly painted on U.S. aircraft, was used on the station’s engine and elsewhere for 15 years, between 2003 and 2018. During that time, Denver Fire’s Capt. Greg Pixley said the department received no complaints about the artwork from the community.

But by April 2018, individuals within the department had raised concerns about the logo.

“When that happened, the administration decided that it’s not worth it,” Pixley said. “We said, ‘Let’s just tell them they can’t use that anymore.’”

Denver City Councilwoman Candi CdeBaca, whose district includes Fire Station 8, said she was shocked when the logo was first brought to her attention on Oct. 22 by a user on Twitter.

“It kind of blew my mind,” she said. “I didn’t believe it was real at first.” But after calling up the department, she learned the logo was legitimate.

“The Department of Public Safety is just notorious for this,” CdeBaca said. “Not a single one of the entities under the Department of Safety has meaningfully addressed the gender discrimination that’s going on — and it’s very concerning.”

The Denver Firefighters Museum, a private nonprofit housed downtown inside Denver’s first fire station, sells the logo on T-shirts within the museum, as well as through its online store.

“It’s a huge issue — but it doesn’t surprise me,” she said. “It’s deeply embedded in the culture of who they are.”

But Jamie Wilms, the museum’s executive director and chief curator, said she sees no issue with the logo.

“We’re all about preserving history and celebrating firefighters, and [the logo] is part of their history,” she said.

Wilms also said that, as far as she’s aware, no visitor has complained about the logo.

Wilms said those proceeds help the museum keep the doors open and the heat on.

“Personally, I love the 1940s — the fashion, the artwork, everything,” she said. “I think people are kind of looking for that nostalgia of the past, and she and that shirt reminds them of it.”

Pixley said the fire department might consider having a conversation with the museum to ensure they know the logo is not approved within the department and that they “respect that.” But at the end of the day, he said, it’s up to the museum and the museum only to choose whether to continue selling the shirts and displaying the logo.

Historically, nose art was a way for the military to express individuality and creativity that was often inhibited by uniformity.

It was a way “of bringing life to an inanimate object,” said Matthew Burchette, the senior curator at the Museum of Flight in Seattle, who also wrote a thesis on the subject.

Burchette said the “golden age” of nose art was in World War II and was “very much an American thing.” The British, Germans and Canadians also incorporated similar artwork, but to a much lesser extent.

At one point, even the Walt Disney Co. got involved, Burchette said.

“You could write to Walt Disney and say, ‘Hey, I’d like you to develop an insignia,’ and they would do it for you,” he said. “Then they would send it to you, and you could use it on any and everything without paying a dime.”

Burchette said when he saw the Station 8 logo, he immediately thought of World War II and found it similar in appearance to the work of Alberto Vargas, a Peruvian painter of pin-up girls.

He also pointed to the eight ball the young women are perched on, which he interpreted as a nod to the phrase “behind the eight ball,” which means being at a disadvantage.

“It’s like, ‘We’re constantly behind the eight ball because we’re always going into a fire or into a wreck. We’re always in a bad situation,’” he said.

The logo’s designer clearly “put a lot of thought into it,” Burchette said.

Denver Fire Department’s Capt. Pixley echoed Burchette. He said the logo was designed “in light of the military to honor the military,” and the women were replicas from the front end of a U.S. aircraft in World War II.

Fire Station 8 also borrowed the logo from the 1986 movie “Top Gun” and changed it to “Top Run,” as the station at one point had the highest tally of emergency calls in Denver, “running about 5,000 calls a year,” Pixley said.

Since the station’s insignia was disallowed in 2018, the fire department has put in place a process for vetting its stations’ logos to ensure an extra degree of oversight.

“If somebody wants to create a logo like that,” Pixley said, “it first has to go through the administrative pieces and be vetted through our operations division and our HR division to ensure it is appropriate and keeping with the good nature of the fire department.”

In reviewing Denver’s 39 firehouse logos, Pixley said the department has had to address a few others with logos that could be “misconstrued.” Of those logos was Station 7’s, on 38th Ave., which called itself the “38 Specials.” The artwork portrayed a revolver, commonly known as a “.38 special.”

The intent of the Station 7 logo was not to show violence, Pixley said, but the department determined nevertheless that the station should create something “a little more subtle that stills allows for the personality and the character” of its firehouse members.